Read All That Glitters (From the Files of Madison Finn, 20) Online

All That Glitters (From the Files of Madison Finn, 20) 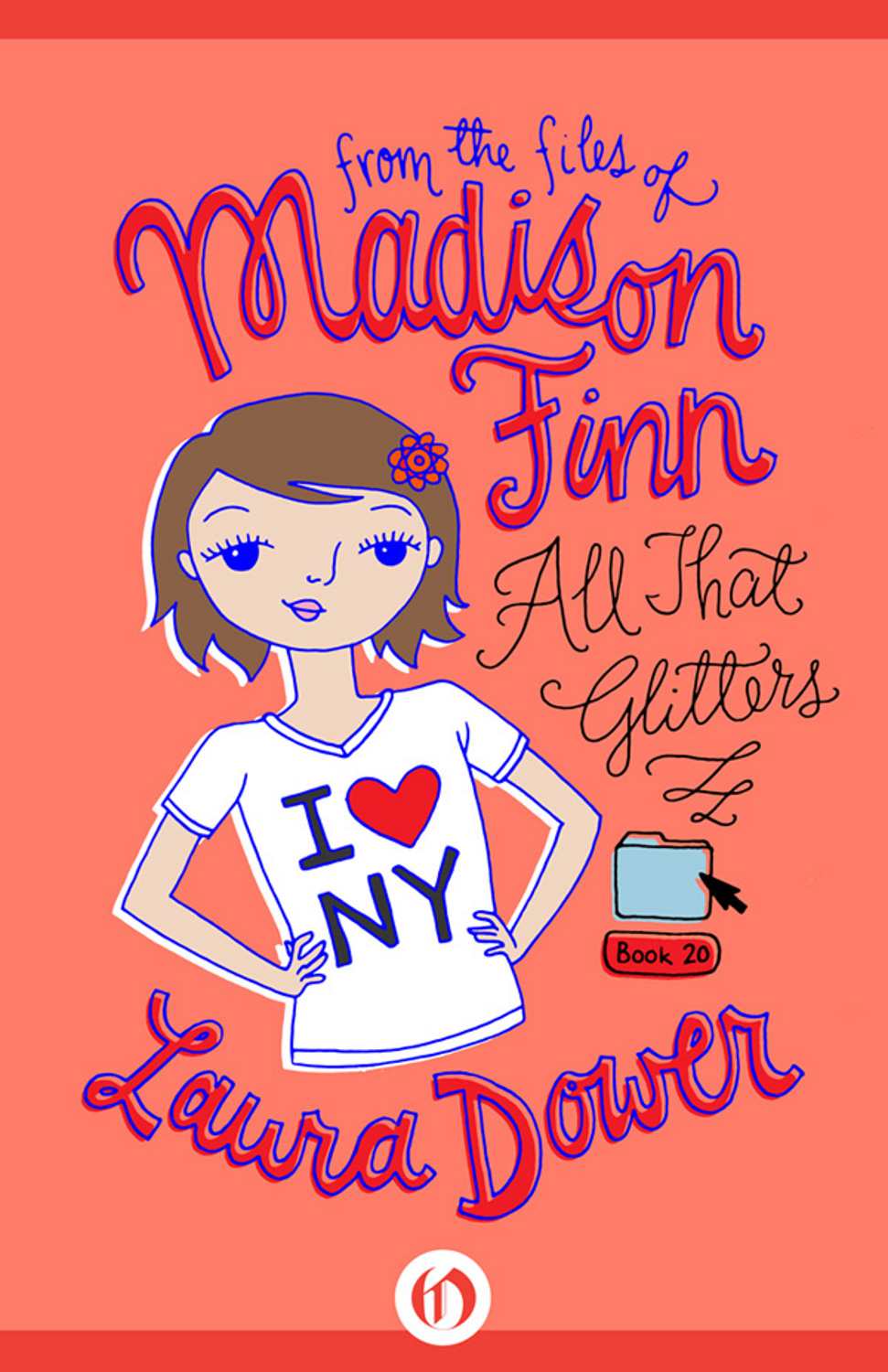 All That Glitters
From the Files of Madison Finn, Vol. 20
Laura Dower

For Myles and Olivia,
my stars

Preview:
Forget Me Not

“Y
OUR OFFICE LOOKS LIKE
a train wreck,” Madison mumbled as she handed Mom a stack of empty file folders. “How do you expect me to keep my room clean when you leave stuff all over
your
room?”

“Honey bear, you know I’ve been busy,” Mom grumbled. “I’ve got a big business trip coming up, and there’s paperwork and hours of video to log…”

“Busy? Mom, you never let me get away with that excuse,” Madison said.

Madison’s pug, Phineas T. Finn, let out a loud yawn and started to snort as if he were about to sneeze but couldn’t quite do it.

“Phinnie!” Madison cried. “Gross! I wish I could teach you how to blow your nose into a tissue.”

Mom handed Madison a pile of books from her shelf. “Do you want these?” she asked. Madison realized she was holding a stack of old Nancy Drew books. Mom had collected them as a child. Some of the bindings were cracked. The pages had yellowed and torn in places. But Madison didn’t mind folded-over corners on pages or even handwriting inside a book. She believed that books weren’t really good unless they’d been read a hundred times at least.

“Why don’t you take Phin for a walk instead?” Mom suggested. The dog wagged his tail, readying himself for sneeze number two. “Get out of the house for a while. Go over to Aimee’s house and play with Blossom.”

Aimee Gillespie was one of Madison’s best friends at Far Hills Junior High—and a fellow dog owner. Aimee’s basset hound, Blossom, and Madison’s Phin were like dog best friends, if there were such a thing.

But Madison agreed that getting outside was a good idea—with or without her friend. She grabbed one of Phin’s rawhide chews and a rope toy. Phin’s collar clinked as Madison attached the leash and tugged him toward the front door.

“We can go over to Far Hills Park,” Madison announced as she pulled on her jacket. “We haven’t checked out the dog run yet.”

Madison loved the fact that the town had finally erected a special fence around a section of the park and marked it
RESERVED FOR DOGS
. It was covered with patches of grass and dirt where dogs could run and sniff and play long games of fetch. It was also a place where dog owners could go and hang out together.

En route to the park, Phin trotted along, pug nose in the air, stopping only to sniff at the occasional hydrant or mailbox. He knew what was coming; Phin loved nothing better than the company of other dogs.

As they turned in to the park, heading toward the dog run, a loose hound dog let out a wild howl. Madison recognized the pooch from the neighborhood. His name was Red, and his owner was also a volunteer at the Far Hills Animal Shelter, where Madison sometimes worked after school. When he saw Madison, Red’s owner gave a huge wave.

Phin pulled hard on his leash, and as they reached the gate to the dog run, Madison unclipped it so he could run free. He dodged a barking Labrador retriever and sniffed his way over toward a white fluffy dog, probably a Maltese.

“It’s okay, you don’t have to worry. Phinnie’s a good dog,” Madison reassured the woman.

Phin and Fluffy stepped around each other, noses sniffing madly, whiskers twitching, ears wiggling. It was like some kind of mating dance.

Madison jerked her head around. Finnster was one of her many nicknames. Actually, it was a special name given to her by Hart Jones, one of her seventh-grade classmates. And right now, Hart was there. He was walking along one of the pathways through the park with another one of Madison’s guy friends, Drew Maxwell.

Madison’s heart skipped a beat. She and Hart had been “in like” this year, doing their own version of a mating dance. First they’d pretend to be cool about their relationship, and then they’d act like good friends, and then finally they would admit that yes, they really, really did want to go on a real date together. Of course, nothing had happened yet in the date department. Her friends were growing impatient with their behavior. Everyone knew about the mutual crush and wondered why Madison and Hart didn’t just act more like a couple.

But for whatever reason, they didn’t. Madison figured they were both a little scared. After all, it
was
scary to like someone that much. It was scary to hear Hart calling her name in the middle of the park, too.

Madison shrugged and gave the two boys a wide smile. They came closer toward her, arms swinging. They each carried a pair of black skates. Hart had two hockey sticks with him, too.

Madison pushed a strand of hair behind her ear. Were her lips chapped? Was she wearing something cute? She glanced down at her purple sweatpants and sneakers.

“Are you here with Phin?” Drew asked, leaning over the dog-run fence. No one could enter the area without a dog, so the boys stayed on the other side.

“Yeah, I’m here with Phinnie,” Madison said meekly. She pointed in the direction of Phin, who was still playing with Fluffy. “We went for a long walk. I was helping my mom clean out the office, and…well, you probably don’t care what I was doing.”

“Sure we care,” Hart said. He leaned the hockey sticks against the fence. “We saw you from the path.”

“We were over at the rink,” Drew said.

“Yeah, I figured,” Madison said, nodding at the skates and sticks.

“I was going to call you today, Maddie,” Drew said.

“I invited everyone over to my house this afternoon; sort of a last-minute thing. We thought of it when we were playing hockey. Want to come?”

“Yeah,” Hart said. He shoved his hands in his pockets. “I’ll be there,” he added cheerily.

Madison didn’t know how to answer. It was one of those scary moments. If she had been honest with herself—and with everyone else, especially Hart—she would have jumped right over the dog-run fence, fallen into Hart’s arms, and declared, “
You’ll
be there? Well, let’s go right now!”

Instead, she rocked from one foot to the other and briefly glanced back over at Phin, who had moved from Fluffy to a sheepdog five times his size. Phin’s curlicue tail was wagging, so Madison left him alone. With his tail still moving, Phin ran over to a pair of dachshunds.

“Well?” Drew asked expectantly. Madison had still not responded to his invitation.

“Well…okay,” Madison replied. “I just have to take Phin home and my Mom can drive me over.”

Hart’s face lit up. “Cool!” he said, clapping his hands.

“Come over around four,” Drew said. “My mom will probably order pizzas or something if you want to stay for supper. And we can watch a movie, too.”

Drew Maxwell’s family had their very own screening room. They were one of the wealthiest families in Far Hills; their house also had a giant pool, tennis court, and about a dozen bedrooms. Drew’s parents basically let him do whatever he wanted, and he loved having his friends over for parties or study sessions.

“I’ll call you if my mom says no for some reason,” Madison said.

The boys grabbed their stuff and headed back toward the path. Just then, Phinnie darted between Madison’s legs. He was being chased by three other dogs. Madison felt her feet go out from under her. She briefly flew up into the air, knocked into the side of the fence, and landed on her butt—right on the cold, hard dirt.

“Oh, my!” From across the dog run, Fluffy’s owner ran over to Madison, arms flailing. “Are you all right?”

Red’s owner ran over, too, to offer his helping hand.

Madison rubbed her backside and stood up. She felt a little wobbly, but nothing seemed broken or bruised. She glanced at the spot where Drew and Hart had been. Happily, her crush had not witnessed her pratfall. She kindly thanked the other dog owners and reattached Phin’s leash. It was time to go.

The walk home from the dog run seemed to take forever. When Madison and Phin finally reached the front porch of their home on Blueberry Street, Phin was panting from all of his afternoon activity. Madison was panting a little, too, in expectation. A get-together at Drew’s was about to turn her boring Saturday into something extraordinary.

Mom said it was fine to go over to Drew’s house for movies and dinner. She would drop Madison off and pick her up afterward.

“Who else is going?” Mom asked. “What about Fiona and Chet?”

Fiona Waters and her twin brother, Chet, were other friends of Madison’s from school and the neighborhood. They lived only a few streets away. Mom wanted to offer everyone a ride.

Madison shrugged at Mom’s questions. “Drew said everyone was going. I mean, I guess Aimee won’t be there, because of Dance. But let me call Fiona and see what’s up.”

Fiona’s phone rang and rang. Her answering machine wasn’t working, and no one picked up.

I wonder where she is, Madison thought. She guessed that maybe Chet, Fiona, and Egg, Madison’s best guy friend and Fiona’s “boyfriend,” were already on their way to Drew’s house. That meant she needed to hurry up.

Madison raced up to her bedroom to change out of the sweatpants into a more festive outfit. She pulled on three different T-shirts before deciding upon a pink one with little rhinestones on it in the shape of a heart. She tucked the shirt into a pair of jeans with a thick belt and topped it off with a snug pink sweater. It looked like a short cardigan from the pages of some fashion magazine, but it was actually a sweater that Madison’s Gramma Helen had knitted for her that fall. Each button was in the shape of a flower, carved out of mother-of-pearl. Madison finished the outfit with a pair of dark pink stretch cable socks and some clogs. Then she applied her favorite strawberry-kiwi lip gloss.

“Don’t you look gorgeous!” Mom said as Madison pulled her jacket on over the sweater and shirt.

“At least all your friends will be there, too, so you won’t have to get too nervous or embarrassed,” Mom said, stroking Madison’s now-pink cheek. “I know that one of these days he’ll pop the question.”

Phin let out another snort and sneeze as they walked through the back door and headed for the car. Mom had been right about Madison’s nerves. When Madison bent down to lift Phin into the backseat for the drive over to Drew’s house, she nearly dropped him. It was a talking-about-Hart aftershock. Lately, that topic of conversation had been making Madison extra twitchy.

After the drive across town to Drew’s megamansion, however, Madison tried to get her twitches in check. She rang the doorbell and took a deep, deep breath, just in case Hart answered the door.

“Wow, some party,” Madison said. “Is everyone here?”