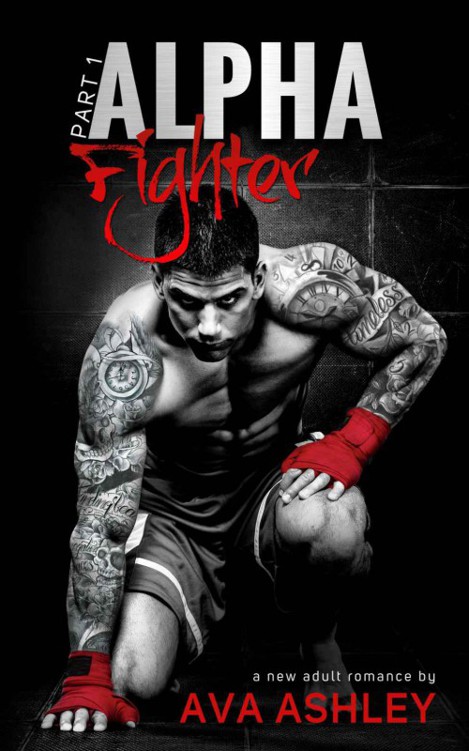 All rights reserved. No part of this book may be reproduced or transmitted in any form or by any means, electronic or mechanical, including photocopying, recording, or by any information storage and retrieval system without the written permission of the author, except for the use of brief quotations in a book review.

This book is a work of fiction. Names, characters, places and incidents either are the products of the author's imagination or are used fictitiously. Any resemblance to actual persons, living or dead, events, or locations is entirely coincidental.

This book is intended for mature adults only.

Thank you for purchasing
Alpha Fighter
by Ava Ashley. To be emailed as soon as Ava has a new book out please join her
MAILING LIST

This book is not suitable for younger readers. There is strong language, adult situations, and some violence.

I
certainly hope I'm not facing any competition for the room, though it sounds like enough of a dump for that not to be too significant of a concern. It would probably take someone as desperate, and broke, as I am to respond positively to a two-line roommate ad in the Sunday paper, consisting of the very eloquent ‘Small room, 1 window, no A/C. Quiet roommate wanted, not looking for a friend. $400/month.’ Alrighty, then. Thanks for being so welcoming, random dude. But I'm not looking to make friends either, so that works for me.

Anyway, my real criteria for a place starts and ends at ‘within my budget’ and that's quite laughably small. Who would have guessed that a few weeks living in a flea-bitten motel would suck up a girl's saving so quickly? Admittedly, it would be easier if I had a job. And getting a job as a minor? Pretty tricky without a parent's signature. Considering that Mom is in heaven and Dad probably wishes that
I
were in heaven, too, rather than single-handedly starting what's sure to be one of the bloodiest club wars in decades, that wouldn't have been so easy. My only choice was to stretch my savings as far as I could, pawn off my gold jewelry along the way, and stretch those pennies like the practical girl that I am. Practical as I am though, it's high time to move out of the Red Hen Inn and into a lower rent apartment share.

Like, say, the 'small room, 1 window, no A/C' gem that I'm heading out to check out now. I fold my last shirt and roll it, military style, into a tight gap in my linen backpack. I survey the room, from the rumpled twin bed with the faded, floral sheets, to the high and narrow window with the prison bars, to the three-legged desk propped up in the fourth corner by a tall, cardboard box, to the mysterious, dark stain by the door that I've become so familiar with over the past few weeks. It's certainly a change from my room at home, which came complete with maid service, 1300-count Egyptian cotton sheets, and more throw pillows than the princess of
The Princess and the Pea
could want.

The daughter of
the
Flint, leader of one of the two dominant motorcycle clubs in Chicago, and veritable biker royalty, living as a destitute runaway. It's almost funny, actually.

But I'm not pining for a return to my ivory prison and my depressing future as Nate's bride. Just thinking of his name makes me grimace in disgust. I can just see how it would be if I stayed home and fulfilled my duty to marry Nate and unite his father's motorcycle club with my father's—I would be sitting at home, pregnant and alone, late at night while he banged that whore, Nikki. Or whoever else it might be by then.

No, thank you, I'd much rather fend for myself.

I swing my backpack over my shoulder and scan over the room one last time. I didn't forget anything, which is unsurprising considering how little I brought with me. There are some upsides to traveling light, if living out of a single backpack even qualifies as that.

The door doesn't lock with a key, just an old-fashioned sliding bar from the inside, so I don't technically need to go by the front desk to check out. I do anyway, just to say goodbye and thank the heavy, half-toothless receptionist for my stay. I may not to be a Santos by name anymore—or at least not that anyone knows—but I was raised right and manners just stick.

"Ms. Brown?" I give her a small smile. "I'm checking out." Her head lolls to the side a little. She's so gone on something—who knows what—that I doubt she even heard me. Still, I give a little wave before I walk away.

It's better to fight. That's why Savannah Santos is no more.

I try not to let my thoughts go there, but I can't help but see the scene play in my mind as I close my eyes. It was the first day of third grade and I couldn't wait to run home and tell Mom all about my day. She always acted like what I had to say was the most interesting thing in the world, even if it was just going on and on about a picture I drew in arts and crafts or a new kid in my class. But that day, I had really exciting news for her. Nate
Moreno
was in my class. I didn't know much about the Morenos, but I knew that the dad Moreno was in charge of the other motorcycle club, the one that Daddy's club didn't like. They fought a lot, especially in the past few weeks, so this piece of news would definitely put me at the center of attention—for the afternoon, at least. I hadn't had such a juicy piece of gossip since when Linah, my little sister, took her first step while Mom had her back turned, making dinner. I was in
such
a hurry to get home and so I was so bummed when a traffic blockade held me up.

I remember pressing my face against the window impatiently, wanting whatever it was that was holding the school bus up to hurry up and be over. There were ten, maybe twelve, cop cars blocking the road. Their lightbars kept blinding me as the lights spun and the mechanical scream of their sirens deafened me. As my senses adjusted to the chaos, barely dampened at all by the bus walls, I could pick up on cold popping sounds and real screams—human screams.

That's when I started to feel scared. Until then, I was fine. But when I heard the screams and the bad pops—the pops that always made Mom close the shutters and herd Linah and me down to the windowless basement playroom—I suddenly couldn't breathe. I hugged my backpack to my chest, burying my face in the hot pink plastic, and shook as I took gasping breaths in and out.

I didn't stop shaking for a week. Not when they rerouted the school bus back to school. Not when Daddy showed up at school hours later, with sad eyes and a hard face. Not when they put Linah and Mom in the ground in matching black boxes decorated with intricate carvings and filled with crushed silk and rose petals.

I remember looking into Mom's box and not being able to cry any more. Her face was as perfectly madeup as every other day of her life, lashes and all, but so terribly still. Even the magical swirls and starbursts that danced from just under her left ear all the way down to the rounded curve of her shoulder, a mesmerizing pattern that had entranced me for as long as I could remember, had somehow lost their magic. Everything was flat, dull. Dead.

The next day, Daddy took me with him to the board meeting. I waited in a room with an attendant, one of the board members' wives, until Finn, Daddy's second in command, came to get me. I joined Daddy in a large conference room. The Morenos were there, too, and so was Nate. I was told that the wars were over. The motorcycle clubs were uniting in a peacekeeping truce. And on my eighteenth birthday, I would marry Nate Moreno and seal the alliance by joining the families.

At eight years old, I was given the burden of stopping a gruesome rivalry, spanning decades, by marrying Nate, a boy I didn't even know. I stopped shaking.

Nikki is in the Morenos’ motorcycle club and I should probably have arranged an escort to accompany me to go visit her. Truce or no truce, I am not entirely safe on their side of town until my eighteenth birthday, and marriage to Nate, in a few weeks. But this is an exceptional circumstance and I'm not going to overwhelm the poor girl with a security guard escort.

I knock on Nikki's door. There's no response and I don't hear anything when I press my ear against the door. She doesn't seem to be home. I decide to stop by Nate's place on the way back, though I'm not supposed to be within five feet of a boy unsupervised, to make sure that he's heard about Nikki's family. Nikki is, after all, his ex-girlfriend. He should know.

I bristle a little at the thought—Nate may be technically off-limits, but the

reality is quite different. Because he isn't the one who has to bleed on our wedding night, the rules about his social life are a lot more lax than the ones about mine.

With that bitter thought, I stomp up the steps to Nate's place and knock on the door. Nate's probably still at the gym and coming back soon, but it's starting to drizzle and I'm not waiting out here until he gets back. I slide a hairclip out of my hair, jostle the lock a bit, and let myself into Nate's place. I grab a banana from the counter and toss myself down on the couch to wait.

Then I hear something from Nate's bedroom. A thump. There it is again. Thump-thump. Someone else is in the apartment. I get up from the couch as quietly as possible, instantly regretting having thrown myself down on it moments earlier. But I don't think whoever it is heard me, because the thumping continues. Then there's a man's voice, but it's so low that I can't make out what he’s saying. A woman's voice replies, also too low to make out any words. Then there's a female sob and the male says something in a soothing voice. Nikki must have come over to seek solace in Nate after receiving the bad news. I decide to leave them alone. He knows her much better than I do and will surely do a better job of comforting her.

But then I hear something else, just as I'm tip-toeing past the door to Nate's bedroom. A moan?

I rip open Nate's bedroom door and glare at Nate and Nikki, limbs entangled and very naked on Nate's bed. They're on top of the sheets and I can see everything. Nate's muscled back before he twists his torso and stares back at me in horror. Nikki's suspiciously round, suspiciously pert, suspiciously large breasts, looking like twin basketballs straining forth under her Oompa Loompa tanned skin. Nikki's lips, colored with her signature Barbie pink lipstick, still formed in a round 'O.' A round 'O' from the pleasure
my
frickin' fiancee was giving the little skank with each thrust of his strong hips, driving his cock deeper into her surely sopping wet pussy.