Read Are You Happy Now? Online

Are You Happy Now? 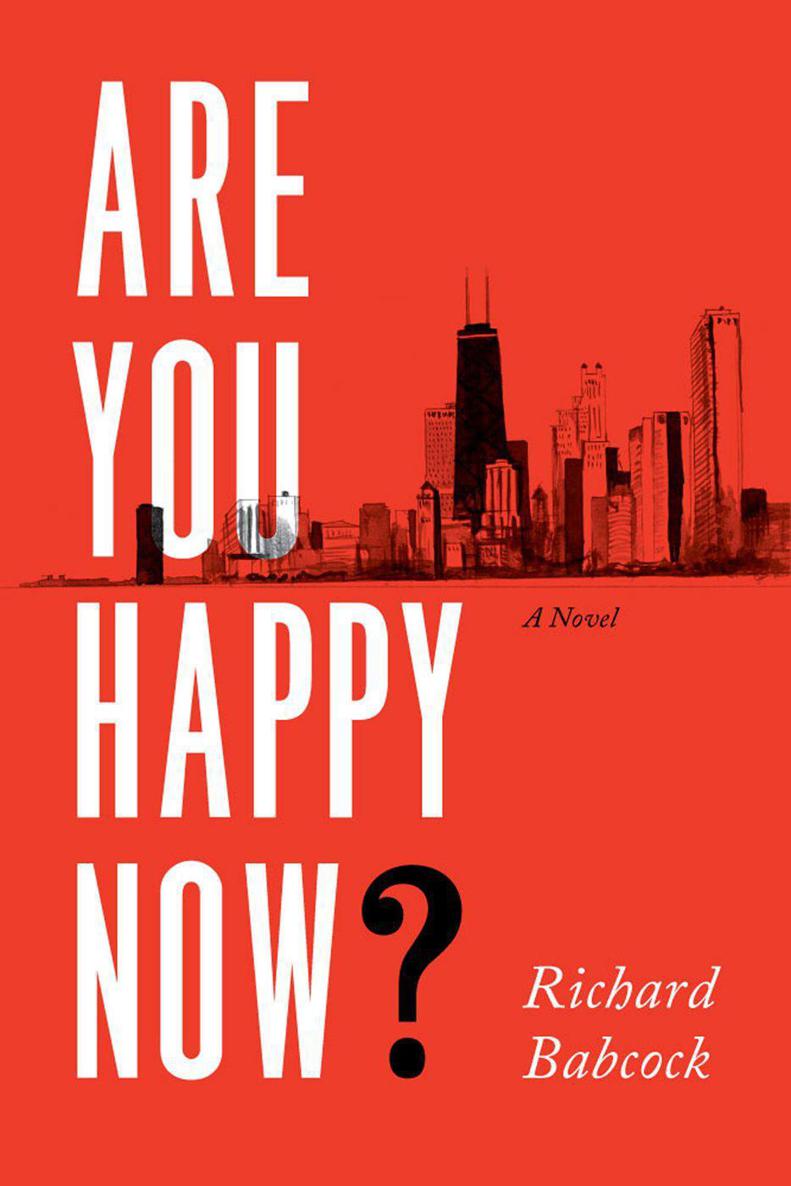 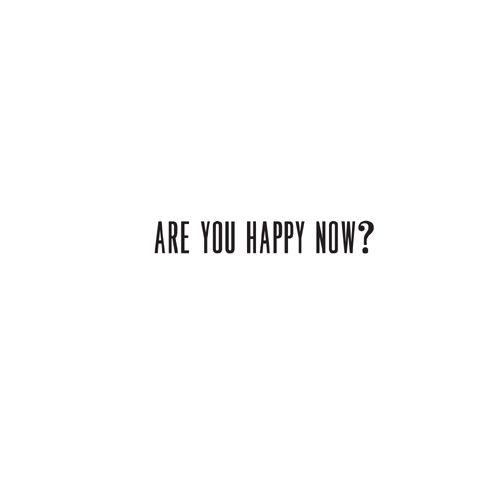 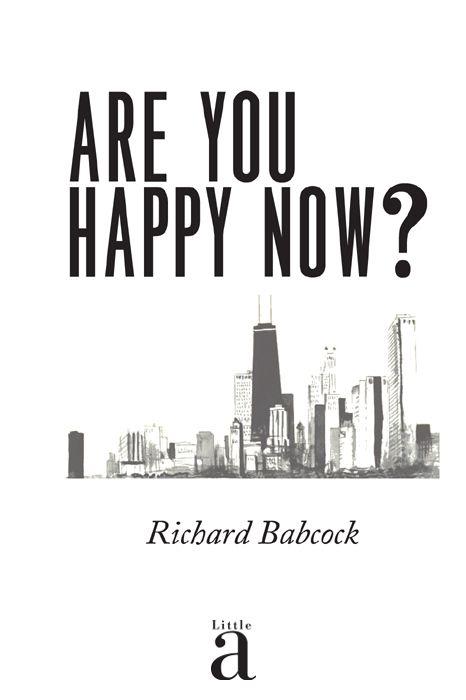 All rights reserved.
No part of this book may be reproduced, or stored in a retrieval system, or transmitted in any form or by any means, electronic, mechanical, photocopying, recording, or otherwise, without express written permission of the publisher.

For Gioia and Joe

SPRING: The Land of Lincoln

A
LLEYS, THINKS
J
OHN
Lincoln. At least Chicago has alleys. He puts down his pencil and ambles the three steps from his desk to the small, round window—about the size of a medium pizza—in his cell of an office. If he were in New York right now, mounds of garbage piled higher than his head would be crowding pedestrians off the sidewalk. Without alleys, everybody’s business is on the street. One spiteful strike by the sanitation workers and New York is turned into a landscape of dark plastic hills and vile odors, man’s concrete universe overrun by gleeful rats.

Lincoln looks down through his round window at the wall of garbage bags now towering along one side of the alley below. At least in Chicago, people tuck the offal of their lives away, off the main thoroughfares, out of sight. That’s one positive thing he could say about this place. One thing.

He returns to his desk and to the 462-page manuscript he has been fitfully editing for the last four days:
37 Rambles Through the Windy City
, by Norman Fleace. Lincoln is on page 226, halfway through the nineteenth ramble. Touched by inspiration, he flips to the title page and draws a sharp line with his pencil over “Rambles Through.” What pretension, Lincoln tells himself. No
one has rambled anywhere since Jane Austen was doddering around some Hampshire garden. For a moment, he considers the spare page in front of him and then strikes “37.” What’s with that number, anyway? No one ever uses 37. There’s never 37 of anything. Now he pencils in three alternative words and studies the new title.
Walking Tours of the Windy City
. Prosaic, but it gets to the point, and cleaning up the verbiage creates alliteration, which will help hold the title in memory. Better.

Lincoln turns back to ramble—now tour—nineteen, a stroll from Clark Street in Lincoln Park twenty-five blocks south to the Loop. Past the site of the garage where somebody—maybe Al Capone’s boys?—rubbed out seven members of the North Side Gang in the 1929 St. Valentine’s Day Massacre (now an empty lot beside an uninteresting apartment building); past the ornate 1893 structure that once held the Chicago Academy of Sciences (snore); past the intersection where the Weathermen emerged from the park to begin a window-breaking rampage through Old Town during the Days of Rage in 1969 (all evidence was cleaned up within a week); past the Moody Bible Church (does anyone care?), the Chicago History Museum, the Latin School, and then block after block of sixties-era residential towers and forgettable mid-rises, a wall of vapidity that John Lincoln shudders to contemplate, let alone walk past. It’s 2009. Get in your car and drive, he thinks.

In New York twelve years ago, the summer he was an intern at Malcolm House Publishing and living in an apartment on West 115th Street, he used to spend every Saturday walking. Usually the journey was the same: he’d start at Columbia University and head south on Broadway, just taking his time, hoofing it through the Upper West Side, into Times Square, around the Village, past City Hall, all the way down to Battery Park. The Broadway excursion took the whole afternoon. Every block,
every step
, he found something interesting to look at—a shop, a building, a celebrity.
That
was a walk. And you could repeat it all over Manhattan, in almost any direction. New York is a
great walking town. Chicago, on the other hand...well, you’ve got the lakefront, from Hollywood Avenue to Hyde Park, and that’s pretty lively, at least in summer, and then there are patches of mild interest—hipsterized Wicker Park, the Magnificent Mile of North Michigan Avenue, the old, struggling Loop, with a surviving Louis Sullivan building here and there (sparkling jewels compared to the blocks that have been turned black and somber by Mies). And in between are vast stretches of...vapidity. Close your eyes and you don’t miss a thing. Sitting at his desk, Lincoln closes his eyes.

But try telling that to Professor Fleace, thinks Lincoln. The old coot is so decrepit, it’s probably been decades since he left his University of Chicago office (in the geography department, naturally). The one time Lincoln visited him, the professor never got up from his desk, just sat there, a small clump of moldy clothes in clashing patterns topped by a scraggly white fur ball. But Fleace desperately wanted to bring out an update of his walking book (the 1987 edition offered only twenty-six rambles). And who better to publish him than Pistakee Press, friend of every hack, windbag, and literary aspirant who ever thumbed through a thesaurus?

Eyes open again, back to tour nineteen: “As we advance down the block, we find the imperious red form of the Chicago History Museum, its memorabilia-filled cavernous bulk secreting an imposing Saint-Gaudens statue of our beloved sixteenth president, standing, in a small garden just behind the building.” John Lincoln’s pencil is poised over the word “secreting” when a knock intrudes on his office door.

“Yes,” he calls out irritably.

A compact round head with sandy hair peeks in. “Do you have a second?” asks Byron Duddleston, the owner of Pistakee Press.

“Of course,” says Lincoln, quickly stiffening at the sight of his boss. “Come in, come in. Or ‘Advance!’ as Professor Fleace would say.”

The owner takes a few steps into the small office, then pauses, lifts his chin, and sniffs the air. Given Duddleston’s light brown coloring and taut, sinewy body, Lincoln thinks of a small woodland animal. “I wish they’d settle this damn garbage strike,” Duddleston says. “The smell is starting to seep inside.”

“Right,” says Lincoln, wondering why he hadn’t noticed. “Please, have a seat.”

The two men sit and face each other over Lincoln’s desk, a chaotic landscape of manuscripts, magazines, books, reference materials, and a computer. Duddleston is carrying a thick manuscript bound by a fat rubber band. “How are things going?” he asks.

Something shopworn and familiar about the manuscript in Duddleston’s lap makes Lincoln uneasy. “Fine, fine,” he tells his boss. “I’ve been working on Professor Fleace’s walking book. A nice job, really—I’m just trying to tighten it up a bit.”

“He’s a beloved figure at the school,” Duddleston interrupts. “In my time, students used to camp out in the halls overnight to be in line to sign up for his class on the geography of Illinois.”

“Some teachers—they just have a way of looking at the world that stays with you,” Duddleston muses. “In my time, the U of C was full of men like that. Women, too.” He ticks off a few names, some faintly familiar to Lincoln. “I don’t know if you had that experience there.”

“Right, right.” Lincoln nods eagerly. He wants to volley back the names of a few of
his
treasured U of C teachers, but his mind is suddenly scoured clean: he can’t think of a single professor he studied under, even though at thirty-three, he’s probably fifteen years younger than his boss.

“Well,” Duddleston says, shifting warily in his chair, getting to the unfortunate point of his visit, “I wanted to talk to you about your editing on Bill Lemke’s book on Wrigley Field.”

“You’re our most experienced editor, the one I rely on for the most delicate and sophisticated jobs.”

“Well, Bill came by this morning desperately unhappy,” Duddleston continues. “He got your edit and your memo last week, and he said it depressed him so much he had to put it aside.”

“I’m sorry to hear that,” Lincoln offers, though he is not entirely surprised.

“He showed me your line edits on the manuscript, and ninety percent of them are fine, fine.” Duddleston leans forward to emphasize his sincerity.

“But...” He sits back again. “Look, Bill Lemke has been a writer all his life. He spent more than twenty years at the
Sun-Times
. I remember looking for his byline myself! And this”—he holds out the manuscript—“some of this is just way, way too harsh.”

“I was trying to be candid,” Lincoln says weakly. “Candid and helpful.”