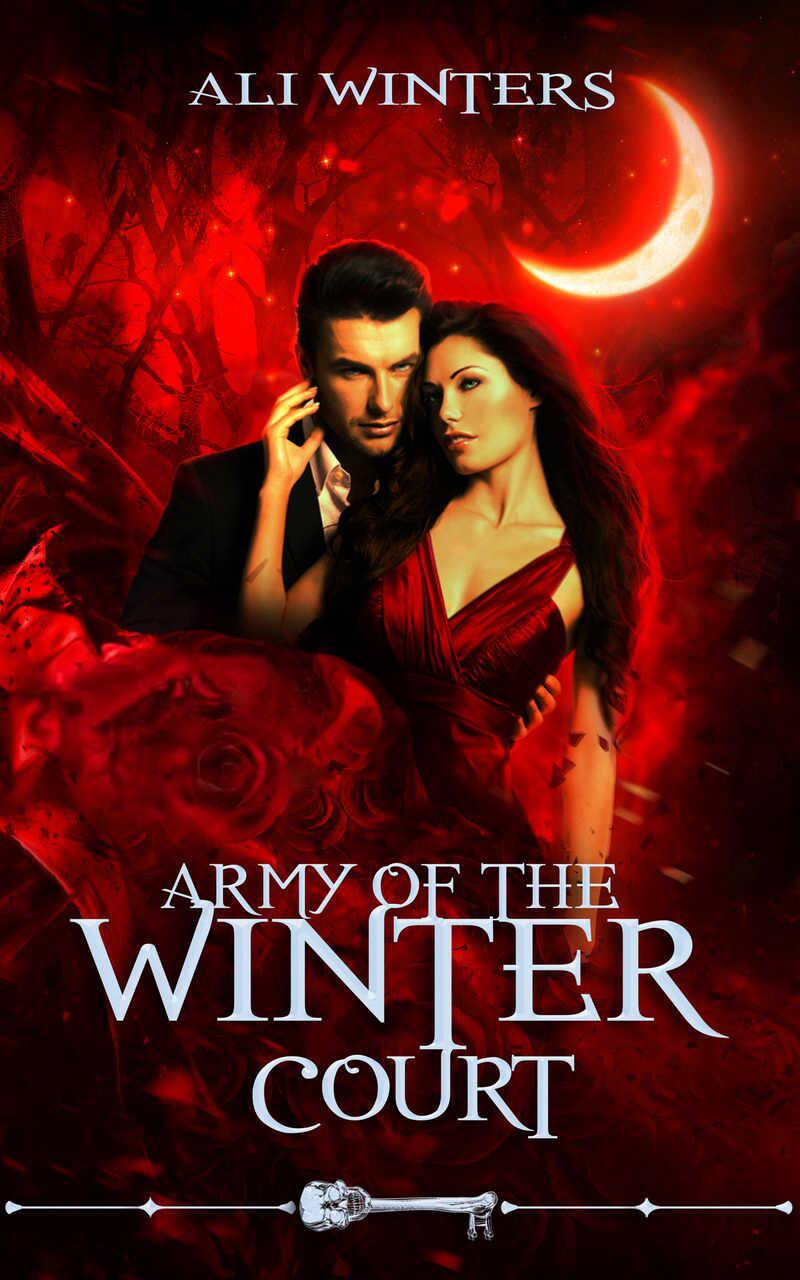 Other Books By Ali Winters

All rights reserved. This ebook is licensed for your personal enjoyment only. No part of this publication may be reproduced, distributed, or transmitted in any form or by any means, including photocopying, recording, or other electronic or mechanical methods, without the prior written permission of the author, except in the case of brief quotations embodied in critical reviews or articles.

Published May 2016 by Sapphire Press

This is a work of fiction. Names, characters, businesses, places, events and incidents are the products of the author’s imagination or used in a fictitious manner. Any resemblance to actual persons, living or dead, or actual events is purely coincidental.

To Michael, thank you, for everything.

The bitter winds died, leaving the air with an unnatural calm. Aurelian stood back, watching as his brother kneeled before their father’s tomb. Thick black trees lined the graveyard, their leaves covered in a dense layer of frost, drooping from the weight of the ice. The branches cast deathly, still shadows across Aurelian’s form as he rested one hand on his mother’s tomb, running the other through the black strands of his hair before shoving it in his pocket. His fingers wrapped around the glass object that sat heavy against his side.

His mind flashed back to the look on his mother’s face the day she died. Her eyes widened, and her mouth dropped open in a silent scream. Aurelian watched as the light dimmed from her eyes. Her body fell to the ground in front of him. Her death came as the pain his father felt ran through her body too. The last beat of her heart ended in the exact moment as her husband’s. Onyx hair fell around her in a halo, as her empty eyes stared unseeing into the sky.

Aurelian scoffed. It was one thing to marry, but it was another to merge your soul with another’s.

To tie your life with another fae’s by a mutual claim was reckless. The King was a war-driven man, always looking for the next battle, the next conquest.

Their father died fighting against the Seelie Queen. A fool’s errand with an army not designed to withstand the heat and powers of the Summer Court. To make matters worse, King Thane had waged his war not having named an heir.

The King believed he would live forever—that he couldn’t lose. Any simpleton knew it took more than skill to do what he had attempted.

Part of Aurelian suspected their father had done it knowing full well that it would create tension between his brother and him. Their sister, Lilith, was weak. She would never fight to declare her intentions for the throne, at least not outright. She lacked the power to stand against one of them, and she was smart enough to know she wouldn’t stand half a chance fighting against them both.

He clutched his hand tighter around the obsidian skeleton key, the smooth glass cold, even against his icy palm. Tilting his head to the sky, he watched as a storm brewed, swirling with the anger he felt deep in his chest. Clouds converged, swallowing up the thin sliver of the moon that hung in the sky. The first flake of snow drifted down, his blue eyes following its path as it danced and swirled in the air until it landed on the frozen ground; the white, a stark contrast with the black soil.

Aurelian had found the key while his brother was busy making a show of mourning their father. As if anyone actually cared. Though, no matter how many times Nolan had dropped his chin in respect when the King’s death was mentioned, his intention was clear—to assume the throne and create a legendary army. One capable of destroying the Seelie Court, or any other realm at a moment's notice; an army whose strength would not be tied to the phases of the moon.

If anyone is crowned the new Unseelie King, it will be me,
he thought.

Prince Nolan stood and strode toward him, making a show of every movement. His cloak billowed out behind him. Nobody wore one anymore and it irritated Aurelian that he did as an attempt to add a dramatic flair to the occasion. His short, dark hair glittered with the white powder that continued to fall.

“Begin preparations for the coronation. It will happen two months from now, on the eve of the Winter Equinox,” Nolan spoke curtly and moved to walk away.

Aurelian reached out and grabbed his arm, forcing him to stop and meet his gaze. “Don’t be so sure about that; it has not been decided.”

“I will be the next Unseelie King, little brother, make no mistake about that.”

“You have no more right to the throne than I, and I intend to make my claim,” Aurelian declared through gritted teeth.

“It will happen, Auri, so you’d best get used to the idea. I will find the halfling and, with her, I will create the army Father only dreamed of and avenge his death. The Seelie Queen
will
fall!”

Aurelian glowered, his lips parted to respond but the words died in his throat as their sister approached. Long black hair flowed behind her like a curtain of silk. The black lace of the dress flowed up her neck and reached all the way down her arms, leaving only her hands and face exposed. Silver swirling accents glinted in the waning moon’s pale light as he looked down into her face, towering over her.

“Now boys, what could elicit such behavior on a day like today?” Lilith asked, placing a hand on each of their arms and tilting her head to gaze up in mock concern.

“You know exactly what we’re talking about, Lil. Ignorance does not suit you.” Aurelian sneered at the transparency of her act. She was as cunning and devious as every other Unseelie fae. He didn’t know who she was trying to fool.

“Mhmm,” Lilith grunted in a pout, sticking out her bottom lip, dropping her arms—and the act. “Fine then, I’ll get to the point. I don’t care which of you claims the throne, but Nolan, please reconsider your plan for vengeance. Father was the most formidable warrior in ages. The Seelie Queen will not venture here; she will know you seek revenge.”

“I will not reconsider, and I expect that you will never make another suggestion like that in the future.”

“Nolan…” she whimpered. “I don’t want to see any harm come to you.”

“Worry not, Lil. The chimera army will destroy her.” He placed a hand on her cheek, cradling her face as she leaned into his touch.

Aurelian swallowed the bile that threatened to rise at their false display of affection. It was no secret that none of them cared for each other. There was no one around to expect otherwise—so why those two bothered to play these games was beyond him.

“Chimera… I thought that was just a legend,” she said breathlessly.

“The chimera are uncontrollable, Nolan. We all know it would be unwise. Halfling warriors are the only ones who stand a chance—and they can be controlled.”

“You think a halfling army will stop the Seelie Queen?” Nolan laughed, the harsh sound sharp against the silent night. “They, of course, would be stronger than the fae soldiers we’ve always used, but they can be destroyed.”

“The halfling we seek is of the Seelie court. With her blood, we can make an army that will take down the Seelie Queen,” Aurelian argueed.

“No, it is only through her heart that we can create an indestructible chimera army. It will be the final army that any realm will ever know,” Nolan said arrogantly.

Aurelian narrowed his eyes. It was insane to attempt to forge an army that could not be controlled. The chimera his brother wanted to create would be unstoppable and unpredictable. There would be nothing standing in the way of that army destroying the Unseelie court on a whim.

“We all know I won’t be vying for the crown… and since our father lacked the foresight to name one of you brutes as the next to rule, why don’t we settle on a fair way to decide?” Lilith cut in.

“What do you have in mind?” Aurelian asked. He didn’t care what game she wanted to play, but he hoped that, whatever it was, it would buy him a little more time to implement his plan to take his brother out of the running.

He needed to find that halfling, and soon.

Lilith’s game might be the only solution as arguing was useless. They could go back and forth, repeating the same points for years and never change each other’s minds. Compromising wasn’t a strong point for either man. “Whatever the outcome, we will still need the halfling.”

Lilith clapped her hands and hopped up and down. “Oh yes! The halfling will decide! You will both search for her and bring her back before the next new moon. Then, whoever persuades her to their side will get the army he wants, as well as the throne.”

“And how do you propose we bring her here?” Nolan demanded.

It would seem my brother does not know about the key…

Their sister let out a high pitched laugh making it obvious she was enjoying their power struggle. “You must find the key and give it to her. If she accepts, then you can bring her here.”

“I will make her accept,” Nolan huffed, his lip turning up in disgust.

“Oh no dear brother, she must come and agree to help you of her own free will or her blood and heart will be useless. She will decide who will be the next to rule. You cannot force this decision upon her.”

“Why don’t I just kill him and be done with it?” He snapped, jerking his chin. “Then I would have all the time I need to ‘persuade’ her.”

“I am standing right here, brother,” Aurelian said evenly. “And in case you’ve forgotten, I am more skilled at fighting than you.”

“It’s true,” Lilith agreed. “He has beaten you more times than I can count.”

Nolan turned and narrowed his amber eyes, ignoring her comments.

“Very well, we will see who can locate this key and coax this halfling into bending.” With that, he turned, whipping his cloak around him and stormed off toward the castle, leaving Aurelian alone with their sister.

“This isn’t a game, Lilith,” Aurelian bit out. She turned her violet gaze to him and stared, wide-eyed.

The View From the Train by Patrick Keiller
What a Carve Up! by Jonathan Coe
Bliss by Peter Carey
El corredor de fondo by Patricia Nell Warren
Tommy Carmellini 02 - The Traitor by Stephen Coonts
A Genius at the Chalet School by Elinor M. Brent-Dyer
Stand Into Danger: Empire Rising Book 0 by D. J. Holmes
The Devil's Cook by Ellery Queen
Sugar and Other Stories by A. S. Byatt
The Good Life by Martina Cole