Read Eight in the Box Online

Eight in the Box 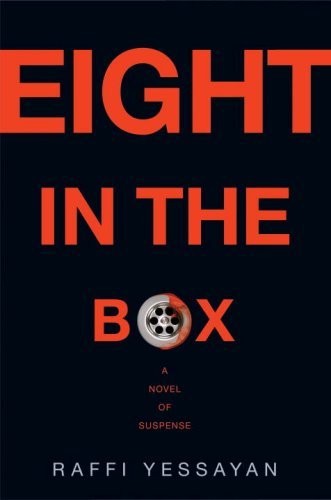 For my wife, Candice

R
ichter slipped his arm down the cool shaft of the dryer vent, feeling
the dampness of the metal through the latex glove. He slid the bolt lock, gave the door a shove and was inside. Locking the door behind him, he reattached the dryer hose to the vent cover. Let the police work a little to find out how he’d gotten in.

It took a moment for his eyes to adjust to the darkness. Richter breathed in the basement smells of detergent and mold and was overpowered by the pungent odor from a cat litter box. A scant amount of light from the casement window outlined the stairs leading up to the first floor. The door at the top of the staircase had been left open for the cat.

How nicely the City of Boston’s streetlights lit up the first floor. A narrow hallway led to the living room with its French doors. Richter entered the room, careful not to bump into anything.

The walls were pale, although he couldn’t make out the color. Artwork by a child with some talent hung, carefully framed and matted, on each wall. A vase on the coffee table held dried roses and Queen Anne’s lace—a nice touch, the sort of thing Grandmother would have enjoyed. It was a comfortable room. He could see himself relaxing on the couch, watching one of his old movies.

He moved out of the light and stepped into the dining room, stopping to look at the family pictures on the mantel. The built-in hutch, with its leaded-glass doors, was filled with old-fashioned teacups and saucers. The dining room led into the kitchen and back around to the front hall where he had entered. He’d completed his private tour of the lovely old Victorian.

Now he had more important things to attend to.

Richter made his way up the stairs. The moonlight shining through the stained-glass window on the landing created a kaleidoscope of muted color on the pine floors. The stairs creaked, but at midnight Susan McCarthy would be in a deep sleep. Her bedroom light had gone out two hours earlier.

Richter walked down the carpeted hall. He turned the cold glass doorknob, and the door to Susan McCarthy’s bedroom yawned open.

A
ssistant District Attorney Connie Darget sped through another
red light before turning onto Prospect Hill Road in Roslindale, one of the old neighborhoods of Boston now being taken over by trust-fund babies. This was one of the few perks of his job. The pay was terrible, but who else besides a cop could fly around the city in the middle of the night with total disregard for traffic laws? He had activated his emergency lights, the wigwags, the strobes, the flashbacks. Driving to a murder scene made Connie feel alive, like a kid sledding down the Blue Hills, not knowing if he’d be able to stop before shooting out onto the highway below.

He stopped in the middle of the street, a few houses down from number twelve. That was as close as he could get. He left the flashbacks on so the cops wouldn’t tow the Crown Vic.

Two ambulances were situated in front of the house, with a half dozen police cruisers blocking incoming traffic. It was warm for February, close to fifty degrees at two o’clock in the morning. A suit jacket was all he needed over his shirt and tie. Most of the residents of the quiet, middle-class neighborhood were outside, but the extensive yellow tape kept them a good distance away.

Connie overheard the grumblings of the crowd as he made his way toward the scene. He played up to his audience, brushing past them with a practiced expression of intense focus.

“Why won’t they tell us anything?” a woman asked.

“I don’t know, but it’s a bad sign when the paramedics are still waiting on the sidelines,” said a man in pajama bottoms and a sweatshirt.

“They’re probably all dead!” the woman said, her voice rising. “I’ve seen this kind of thing on TV. If the victims are dead, then their bodies get treated like a crime scene.”

TV can teach you something after all, Connie thought.

The media had taken over the parts of the street that were not taped off. Television reporters were interviewing neighbors, fishing for sound bites for the morning news. Connie flashed his credentials to a uniformed cop and moved toward the crime scene.

As one of the young prosecutors handpicked by the district attorney to represent the office at all murder scenes, Connie had access to a world most civilians never imagined. Members of the Homicide Response Team were supposed to oversee the integrity of each investigation. In reality, they stayed out of the way and let the homicide detectives from the BPD run the show. Connie flipped the smooth, black leather billfold with its gold badge back into his jacket pocket.

After his first few homicides, he noticed that the police gave him more access to crime scenes, maybe because he looked the part of a seasoned detective. With his cleanly shaven head and BPD notepad, he blended right in. And he was a city kid, like most of the cops, not some rich carpetbagger from the suburbs who’d been afraid to come into the city until his politically connected parents got him a job in the DA’s office.

Connie skirted the taped perimeter. He never walked through a crime scene unless he checked in with the detectives first. He saw a cop he recognized and walked over to get an update.

After a quick handshake, the officer leaned in close. “Connie, one vic, a female, Ocean Frank before we got here. That’s all I know. They haven’t told us shit, other than to keep the crowd back.”

“Mooney and Alves. They’re inside.”

“I should’ve known,” Connie said. “Only Sergeant Mooney would close off this much of a street as a crime scene. He’s got half of Rozzie taped off.”

“That’s why he’s the best.” The cop pointed toward the side porch. “That looks like Alves now.”

Connie had met Detective Angel Alves on his first day as a virgin prosecutor in the South Bay District Court. Not even four months ago Alves had been promoted to Homicide, but the two of them had stayed in touch. Connie watched as Alves directed two patrolmen to the back of the house before turning toward the street. Connie raised a hand to catch Alves’s attention. Even at a murder scene at two in the morning the detective looked sharp in his tailored suit. They made eye contact and Alves waved him over.

“Please don’t call me that,” Connie said, shaking his hand. “You sound like my mother.”

“Okay,
Connie,
nice of you to show up.” Alves looked pointedly at his watch. “We’ve been here an hour. The reporters made better time than you.” Alves tilted his head toward the cameras that were focused on them.

“I only got paged twenty minutes ago.” Connie shook his head. “Those guys in Operations are useless. Once they called so late I showed up after the scene had been cleared. Then I got chewed out by the DA. I don’t like to rat people out, but I’m calling their captain about this.”

“Do what you have to. Nobody’s going to think you’re a rat. We’ve got another ugly scene here.”

“Remember Michelle Hayes, just before Christmas? She disappears and all we find is a bathtub full of her blood.”

“I thought we had her as a domestic.”

“We did, originally. She’d been through a nasty divorce. But the guy had an airtight alibi. Out of town on a corporate team-building junket, where the whole office goes into the New Mexico wilderness for the weekend to play Boy Scouts. Probably spent most of their time shopping in Santa Fe. No other suspects, so the case goes cold. Until tonight.”

“Susan McCarthy. Also recently divorced, but still friendly with the ex. She got the house and kid in the settlement. According to her parents, the ex took the daughter to Disney World for February school vacation. We’re assuming it’s Susan’s blood in the tub, but we won’t know till the DNA comes back. The crime lab is looking for known samples to compare.”

“Nothing. Tonight’s the first sign that the Hayes murder wasn’t isolated. We’ve got a sick bastard on our hands, Connie. Whoever did this has the same MO.”

Alves shook his head. “We never released the details. The media never picked up on the story. We’re not as lucky tonight.” Alves motioned again toward the reporters circling them. “I heard a few of the uniforms calling him the Blood Bath Killer. Wait till the
Herald
gets ahold of that.”

“Not much.” Alves took out his notepad. “We’ve got the district detectives canvassing the neighborhood for witnesses and the crime lab processing the house. Sarge is upstairs with a few of the civilians from the crime lab. Last time, the guy left us nothing to work with. He may have made a mistake this time.”

“We found a sneaker print in the dirt by the cellar door. No signs of a forced entry, so it may not mean anything. We’re taking a plaster mold, just in case. If he didn’t come in through the basement, then we’re thinking McCarthy may have let him in. Maybe they had a date and then he decided to kill her.”

“Who found the scene?”

“Nine-one-one call. Never says a word, leaves the phone off the hook. Just like the Hayes case. Dispatcher figures someone accidentally hit the preprogrammed emergency button. Kids do it all the time. We have to send a cruiser out anyway. Uniforms get here in less than five minutes. Side door’s wide open. Kitchen phone’s still off the hook. Then they find the bathtub and the blood. Looks like our boy wants to personally call us out to see his work.”

“Upstairs. You’re not going to throw up on me, are you?”

“I’ll never live that one down, will I? That woman’s body was rotting for days before the neighbors smelled the stench. And you clowns didn’t warn me to put VapoRub under my nose.”

“Just busting your chops.” Alves smiled. He turned and led Connie into the kitchen. The kitchen looked perfectly ordinary, nothing out of place except for the telephone receiver dangling from its cord.

“The guys that answered the call knew what they were doing. They didn’t touch anything. We’re going to take the phone off the wall and fume it for prints. And we’ll need elimination prints from all family members.”

Much of what Connie knew about police work he’d learned from Angel Alves, especially during ride-alongs when he could watch Alves in action. Walking through this normal house, knowing that a person had been killed upstairs, Connie remembered one of the first lessons Alves taught him, about the importance of watching a person’s hands. As Alves put it, “No one is ever going to shoot or stab you with their eyes or their feet. If someone’s going to kill you, it’ll be with his hands.”

As they made their way to the second floor, Connie thought about the terror Susan McCarthy must have felt as she took her final breath. He paused at the top of the stairs and looked down the hall where a woman had lost her life. How true Alves’s words were.