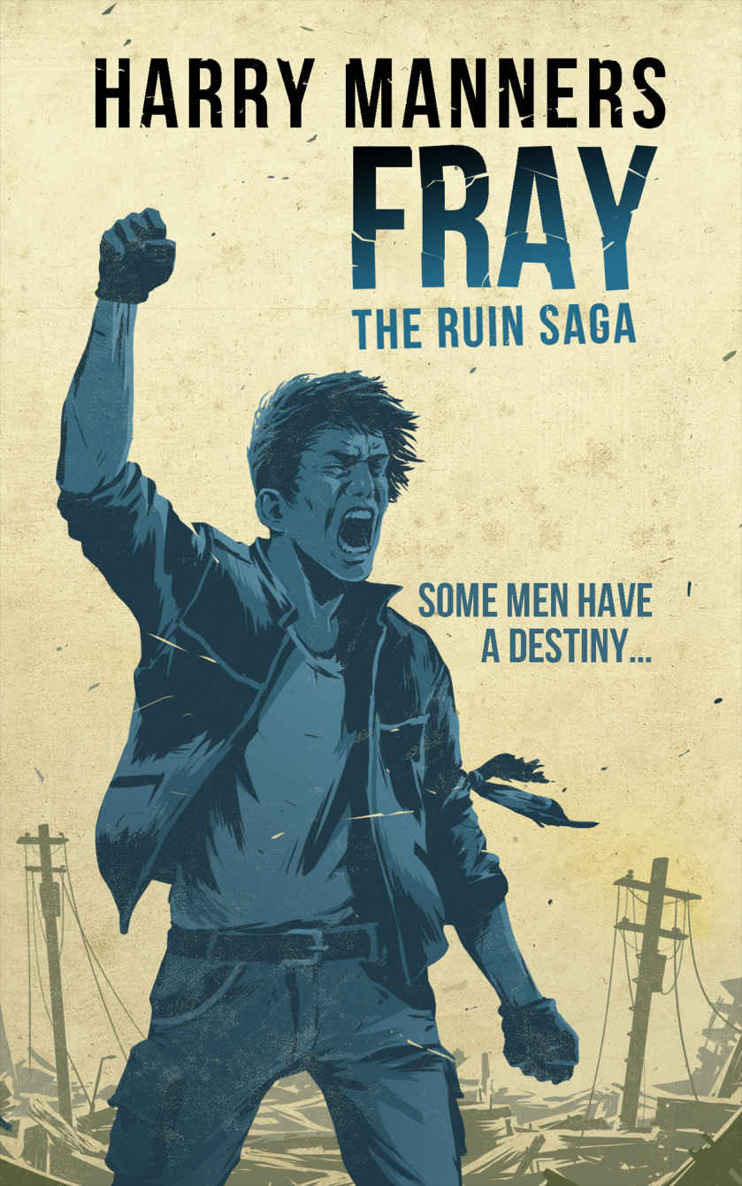 Decades after the End, which caused the majority of mankind to vanish in a single moment, civilisation is in danger of crumbling forever. Fires line the horizon, distant screams ring out from every direction, and a blanket of shadow has descended over all of England.

New Canterbury and Canary Wharf, the last bastions of the Old World, are cut off and surrounded. An army marching from the North, and a supernatural struggle between good and evil, threaten the survival of everyone.

Norman Creek and the mission of New Canterbury must overcome their demons and lead the resistance against the encroaching hordes. Outnumbered, outgunned and alone, they must fight to keep the Old World alive, as the last war of humanity begins.

Join my list to be the first to get free exclusive content and hear about new releases:
http://eepurl.com/V4niL

A person often meets his destiny on the road he took to avoid it.

The belief in a supernatural source of evil is not necessary; men alone are quite capable of every wickedness.

One minute before the world ended, Lucy Callaghan got ice cream.

“Thanks, Mum!” She beamed, skipping from the parlour and licking the cone as she went.

Her mother grunted at the counter, fussing with her handbag.

St Pancras International glittered before them, more glass-domed jewel than rail hub, buzzing with London’s business elite, gawking tourists, coffee-slurping office drones, and bopping teens on their merry way to untold mischiefs. High-end chain stores lined the interior of a space the size of a cathedral, leading away towards the London Underground. Lucy waited as her mother paid for tickets, licking her ice cream cone, resisting the urge to look at the handbags in Gucci. She liked grown-up things. She was getting older now, almost seven.

She knew better than to ask as Mum said there were going to be a lot of connecting trains today and they were on a tight schedule. But Lucy also suspected the ice cream was an attempt to barter for good behaviour. It was a long way to Manchester. Lucy could make life hell.

Underneath her enjoyment of the creamy goodness, a small part of her—the treacherous
grown-up
part of her that liked handbags—realised that there was no room for pushing Mum today. Times were tough, Mum said, and that meant they had to move again.

She had told Lucy only last week. Lucy had tried screaming, then crying, then sulking. That hadn’t done it. That never did it.

Mum said they had to go where the jobs were. Lucy thought that was pretty dumb. Some of her friends’ mothers lived
on the dole
. She wasn’t quite sure what that meant, but she knew it meant getting money for not doing very much. She got in trouble when she said that. Mum said she didn’t take charity.
We’ll eat out of bins before I take money without earning it
, she said.

Lucy had almost argued, but Mum had given her one of her patented
don’t start
looks.

Their apartment had thinned of furniture and ornaments of late. Lucy didn’t like watching lamps or piles of CDs go missing, especially when all Mum could talk about were the
hot meals
they ate later in the day. Eventually they had run out of things and had to snuggle on a single mattress on the floor. Then a smelly bald man had come around and said they couldn’t
doss around for free
anymore, and he wanted them gone.

That was yesterday. Lucy was scared the man would come again, but this morning Mum had packed a bag of what they had left and marched Lucy to the train station. She had made Lucy wear her best red dress and plastered her own face in makeup. She said she had an interview for a job.

Lucy complained she didn’t want to go. Why couldn’t Mum get a babysitter?

“The same reason we don’t have a manservant and a Rolls,” Mum had muttered, giving a harsh bark that didn’t sound anything like a real laugh.

Lucy didn’t get it. She didn’t get a lot of things right now. But she did know there wasn’t any money since Dad left. Definitely not money spare for ice cream.

A distant disquiet throbbed in her belly. If she had been older, she might have recognised guilt.

Instead she took another bite of her cone, and the feeling went away.

Her mother walked around her with a heavy puff and leaned against the wall. Already her hair was ruffled into a mousy bird’s-nest, and her lipstick had lost its sheen from ceaseless nibbling.

Lucy stopped licking. There was something strange in her mother’s voice. “What’s wrong?”

For a moment her mother seemed on the verge of saying something, her lips pale under all that lipstick. Lucy didn’t remember ever seeing her look so tired. Then her lips came back together, and she ran her hand along Lucy’s neck, stroking her hair.

In the midst of commuter bedlam, they smiled at one another, and a strange ache touched Lucy’s throat.

Life was funny, Lucy decided. Often it hurt, and you didn’t know why.

But it was okay. In that moment, she had Mum, and she had ice cream.

Nearby, a young mother played a ditty on one of the pianos dotted around the station. Her chubby baby kicked his little booties in his pram beside her, gurgling happily.

Lucy and her mother watched the woman’s fingers dance across the keys with featherlike grace, and the world flexed in their wake.

Lucy had just decided to be brave on the train to Manchester—brave for Mum—when everybody around her doubled over and screamed.

A moment later, all was dark and painful. Nerves crackled, muscles contorted. Lucy was suddenly utterly lost and alone. So things remained for countless years, years of toil and suffering, along with seven billion other lost souls amid endless darkness.

The station jarred to a halt, and every clock and wristwatch stopped at precisely 08:15. The shock front, a silver wave propagating at the speed of light, passed through space, metal, and flesh alike, taking every human being with it in as many puffs of diaphanous mist.

All across the world, that same pulse brought each person a moment’s chill in their bones as the echo of doom rattled in their ears. Then it was over. Suddenly, totally, over.

Like a sieve through a fish pond, the End stripped humanity from the earth. Somewhere amidst the turbulent firmament, spinning end over end, a lone ice cream cone splashed down upon a tiny, crumpled, red dress.

This was the way the world ended.

A second later, two figures exploded into being from the dissipating mist, one sauntering and the other sprawling.

Fol skidded across the tiled floor, beaten and torn. All around him, far beyond this place and yet right beside it, a thousand strings holding the fabric of things in place stretched, pinged free, and began a long process of unravelling.

Despite the terrible knowledge that one false move could bring his long life to an unceremonious and ugly end, a thought took flight in his mind like a trapped moth: to feel again, to know pain. Such was to be alive. Bleeding from a barrage of blows both physical and beyond, he screamed, “Son of a bitch, whore!”

The mist cleaved in the wake of the hulking behemoth in pursuit. Heavy footfalls boomed under the high roof, coupled with a laughter that could have wilted flowers upon their stalks. Wreathed in golden plate armour, shining with the reflections of
other places
, a creature seven feet tall and with skin the colour and texture of volcanic ash stalked towards him. A curdled, guttural voice welled up from deep in its chest: “Highcourt is fallen, Jester.”

Fol spat at the great lumbering thing and launched himself from the floor in a shower of curses.

His face met a fist brought up almost casually, swatting him aside. Bright lights and ringing erupted in his head. Skittering into a pile against the base of a pillar, he wiped blood from his lip, transfixed by it in all its vivid glory.

He felt them—all of those abducted to the void to labour, under incredible strain, forever tortured. The others had winked out like candles in a deluge. None but he remained to share the pain. Every fibre cried out, shuddering on the brink of shattering.

The pain of the seven billion Vanished souls coursed through his flesh.

Mountains had eroded and oceans boiled in the course of his life. Countless empires had risen and crumbled. Untold atrocities had passed in that time, but none so great as this. None so heinous. Upon the tiled floor, lying atop a little red dress covered with melted ice cream, Fol wept.

The thing before him opened its mouth yet wider and roared with laughter, a footlong chin bobbing under a mouthful of needle-like teeth. “This world is ours.”

Fol shook his head, looking once more at the blood on his fingertips. To know eons without number in prosperity and dignity, watch the Web of All Where pass by with its tides of mortal lives—then to bleed one’s own blood.

So grand had the dominion of Highcourt become that they had grown lazy and decadent. And now it was all gone.

Great Weaver, forgive me. I have doomed us
, Fol thought.

But then from the firmament, knowing, delivered by an unseen hand—one far beyond the gold-plated tadpole who had stood mocking him a moment before. One far beyond.

It’s not over. Maybe, maybe I can fix it.

He saw glimpses of a long road ahead, one that stretched clear across All Where. It would mean pain, death, and misery, and the road might be never-ending. But somewhere out there waited a few who might undo these wrongs.

Creatures of destiny
, he thought.
The Frost didn’t take them all. There are survivors. It’s not over.

“You have no idea what you’ve done,” he breathed, crouched on the floor.

Another laugh, one that shook the foundations of the station. All around them, the echo festered and took on life of its own, lingering to spite the myriad piles of suits and loafers, trousers, briefcases, smartphones, pacemakers, and necklaces littered every which way—a carpet of possessions over a world scraped clean, sanitised in the wake of coming darkness.

“This world falls, and the rest will follow. It is inevitable; soon the master will be free.” The golden creature turned its gaze upon Fol. “I can’t thank you enough for all you’ve done.”

Fol searched inwardly for somebody, anybody, but found only silence. Only moments ago he had battled alongside the others in Highcourt’s crumbling halls; the air had been filled with the war cries of scores of battles across the cosmos. Now, in the vast reaches of space, nothing. All Where reeled from the blast, its guardians in tatters. Nobody was coming to save him.

La taberna by Émile Zola
Sherlock Holmes 01: The Breath of God by Guy Adams
Letters to a Young Scientist by Edward O. Wilson
Farmed Out by Christy Goerzen
Murder on Lenox Hill by Victoria Thompson
The Rescue by B. A. Bradbury
Philip Larkin by James Booth
Already Dead by Stephen Booth
Low Life by Ryan David Jahn
Running Towards Love by Adams, Marisa