Read From The Holy Mountain Online

From The Holy Mountain 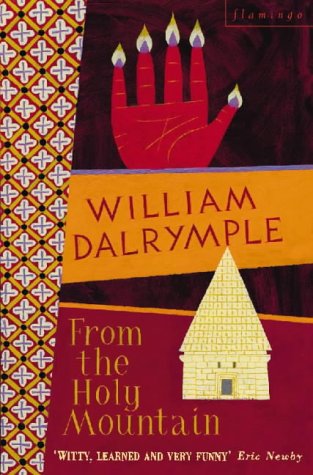 SUMMARY:
In his third book William Dalrymple has dug deep to present the case of the Middle East s downtrodden Christians. More hard-hitting than either of his previous books, From the Holy Mountain is driven by indignation. While leavened with his characteristic jauntiness and humour, it is also profoundly shocking. Time and time again in the details of Dalrymple s discoveries I found myself asking: why do we not know this? The sense of unsung tragedy accumulates throughout the chapters of this book&From the Holy Mountain is the most rewarding sort of travel book, combining flashes of lightly-worn scholarship with a powerful sense of place and the immediacy of the best journalism. But more than that it is a passionate cri de coeur for a forgotten people which few readers will be able to resist Philip Marsden, Spectator

was born in Scotland and brought up on the shores of the Firth of Forth. He wrote the highly acclaimed bestseller
In Xanadu
when he was twenty-two. The book won the
1990
Yorkshire Post
Best First Work Award and a Scottish Arts Council Spring Book Award; it was also shortlisted for the John Llewelyn Rhys Memorial Prize. In
1989
Dalrymple moved to Delhi where he lived for four years researching his second book,
City of Djinns,
which won the
1994
Thomas Cook Travel Book Award and the
Sunday Times
Young British Writer of the Year Award.
From the Holy Mountain
was short-listed for the Duff Cooper Award and received the Scottish Arts Council Autumn Book Award for
1997.
The Age of Kali,
a collection of his pieces about the Indian subcontinent, was published in
1998.

In
1997
William Dalrymple wrote and presented the Channel
4
series
Stones of the Raj.
He is married to the artist Olivia Fraser, and they have a baby son and a daughter. Dalrymple was recently elected the youngest Fellow of the Royal Society of Literature.

From the reviews of
From the Holy Mountain:

'From the Holy Mountain
is a further landmark in a writing
career unblemished by failure and enlightened by an erudition
worn as lightly as a cloak. Dalrymple's lucidity and learning are
woven into a writing style which is never pompous or smug
...
This is a brave book, intellectually, spiritually and physically. In
a missive which brims with intelligence and a voracious appetite
for knowledge, Dalrymple paints wonderful sketches of a
twentieth-century landscape bedevilled by the conflicts of the
past
...
a book which provokes thought as often as it entertains
and beguiles'

'William Dalrymple has effortlessly assumed the mantle of Robert Byron and Patrick Leigh Fermor . . .
From the Holy Mountain
is destined to be this year's big book
...
an impressive achievement'

lucreti
a
stewart
,
Guardian
Books of the Year

'In his third book William Dalrymple has dug deep to present the case of the Middle East's downtrodden Christians. More hard-hitting than either of his previous books,
From the Holy Mountain
is driven by indignation. While leavened with his characteristic jauntiness and humour, it is also profoundly shocking. Time and time again in the details of Dalrymple's discoveries I found myself asking: why do we not know this? The sense of unsung tragedy accumulates throughout the chapters of this book
...
From the Holy Mountain
is the most rewarding sort of travel book, combining flashes of lightly-worn scholarship with a powerful sense of place and the immediacy of the best journalism. But more than that it is a passionate
cri de coeur
for a forgotten people which few readers will be able to resist'

'Dalrymple brings the past alive wonderfully and is a brilliant communicator. If
In Xanadu
was reminiscent of early Evelyn Waugh or the devil-may-care Peter Fleming,
From the Holy Mountain
evokes Robert Byron and Bruce Chatwin. It is a more poetic and disturbing book and all the better for that. It marks the maturing of a very fine writer'

'William Dalrymple has earned a rapid reputation as a brilliant young travel writer and
From the Holy Mountain
is a splendid, effective and impressive book'
j
.
d
.
f
.
jones
,
Financial Times

'Since his magnificent
In Xanadu,
William Dalrymple has been
generally acclaimed as one of our best contemporary travel writ-
ers. In
From the Holy Mountain
he travels the Silk Route of
ancient Byzantium through the present-day Middle East tracing
the
ad
578
journey of John Moschos, the great Byzantine monk,
traveller and oral historian
avant la lettre.
His aim is to uncover
the human archaeology of Eastern Christianity. It is realised in
meditative, sensuous prose'

'Utterly compelling: a meaty, intriguing volume and a worthy successor to
In Xanadu
and
City of Djinns'

'A huge, breathtaking book about a colossal journey. The writing is by turns learned and lyrical
...
a magnificent achievement'

'Any travel writer who is so good at his job as to be brilliant, applauded, loved and needed has to have an unusual list of qual-ities, and William Dalrymple has them all in aces. The mostimportant is curiosity and the intrepidity it generates. Thenthere has to be the feeling that there never has been such a book as this, and never will be again. He must be enough of a scholar,and it helps if his jokes are really funny, and if he discoverssomething and goes to unexpected places. Dalrymple scores high on all these points. He knows more than Robert Byron, isless of a mythomane than Bruce Chatwin and not so dotty as
Robert Fisk. He does not go slumming or patronise, but his ear for conversation - or can it be his talent for impersonation? – is as good as Alan Bennett's. The book is a good, long read, like the works of Gibbon
...
The best and most unexpected book I have read since I forget when'

'Terrorists, devil-worshippers, nights spent in monastery cells
...
Dalrymple didn't have to search out troubles during his intrepid, five-month trek through the Levant. His mentor and guide for the journey was John Moschos, a monk who travelled the same route in the sixth century
ad
and described the final flourish of Eastern Christianity. Dalrymple now bears witness to the almost-defunct Christian monasteries and sects of the Middle East, while also managing to recreate the world Moschos knew. It's a wonderfully evocative book'
harry
ritchie
,
Mail on Sunday

'Because he has the interests and enthusiasms of a scholar Dalrymple, with his magnificent zest, inspires the reader. We relish the tense air of south-east Turkey, the threat of Lebanon, the menace of Upper Egypt; and so does Dalrymple, at least in the vigorous telling of it. Massacres without number, enforced migrations, local wars: the effect of these events on human beings is burned into the pages of this excellent book. Yet Dalrymple is a delightful companion for the reader: a sunny
equanimity shines around him. The self-portrait which emerges from these pages shows us a Renaissance head, not swollen but large with knowledge, painted like that of the Duke of Urbino by Piero della Francesca, in profile, against a library window through which may be discerned the delectable landscape of adventure'

L'eau Clair Chronicles 04 - Lady of the Keep by Sharon Schulze
Kraken Orbital by James Stubbs
Colt by Nancy Springer
The Best of Ruskin Bond by Bond, Ruskin
The Jugger by Richard Stark
Undeniable (Undeniable series) by Claire, Kimberly
Mind Guest by Green, Sharon
The Men from the Boys by William J. Mann
The Carnelian Legacy by Cheryl Koevoet
Code of Siman by Dayna Rubin