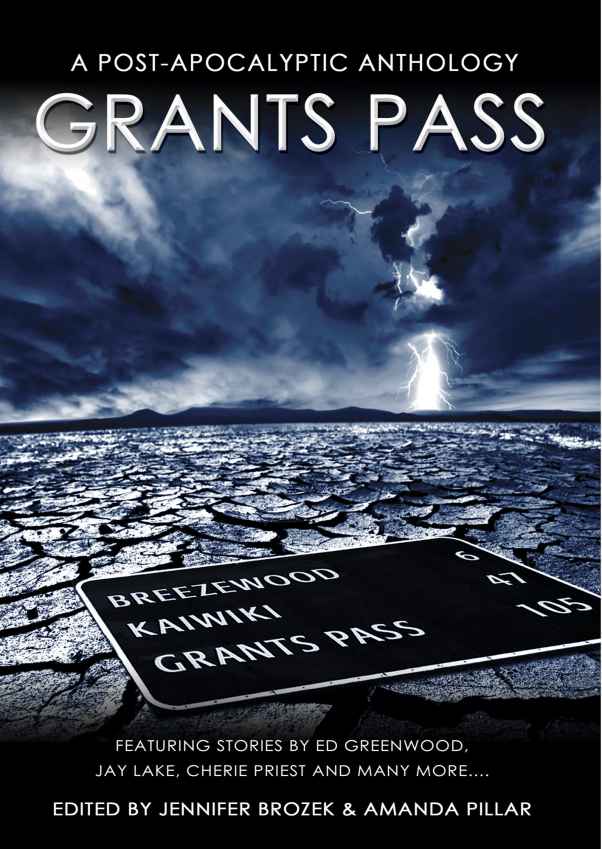 All stories copyright 2009 by their
respective authors. Published by permission of the authors

Design and layout by Mark S. Deniz
and Amanda Pillar

This ebook is licensed for your
personal enjoyment only. This ebook my not be re-sold or given away to other
people. If you would like to share this book with another person, please
purchase an additional copy for each recipient. If you're reading this book and
did not purchase it, or it was not purchased for your use only, then please
return to Amazon.com and purchase your own copy. Thank you for respecting the
hard work of these authors.

To my friends and family,

May we stand together.

For my parents, John and Sigrid,

For their support and
encouragement.

For my husband, Jeff,

Who has his own hut on the island
and always will.

Rick Silva and Rory Clark, for being
there at the start and sticking with me through thick and thin. Montgomery
Mullen, for indulging my flights of fancy and not laughing at me when I
presented you with the idea of Grants Pass as a place of sanctuary.

Thank you, Mom, for enduring years
of fiction and editing each piece with firm tact and support.

Finally, thank you, Amanda Pillar,
for being an excellent co-editor and Mark Deniz of Morrigan Books for making
some hard decisions and taking a chance on both me and the Grants Pass
anthology.

And of course, Jennifer Brozek for
letting me make Grants Pass my baby too.

What makes Grants Pass, Oregon,
in the USA so special? It is a small city of 23,000 people in the middle of the
Rogue River Valley. It also happens to be almost exactly halfway between
Redmond, Washington and Mountain View, California. This is important because I
drive between these two cities twice a year on average. Grants Pass has become
the turning point for my road trips. It has also sunk itself deep into my
subconscious.

It may amuse some readers to know
that the journal entry written by Kayley in the prelude is based on one I wrote
online back in May 2004. After receiving a number of responses from my friends
saying that, yes, they would be there or no, they would not be there and why,
the idea for the anthology was born.

I spent the next four years
advertising the anthology, collecting stories, editing stories and shopping the
manuscript around. The most common response I got from publishers was, “This is
a great idea but you don’t have enough big-name authors. Let me know if you
ever get it published”. It was both encouraging and heartbreaking at the same
time. All the while, my apocalyptic minions would send me story after story of
every natural disaster, every possible plague and every great catastrophe that
occurred around the world, proving to me that this anthology was relevant to
what was happening in today’s society.

In early 2008, I had a
heart-to-heart conversation with Mark Deniz, who had a story in
Grants Pass
.
I knew he was succeeding with his independent press, Morrigan Books, and I
asked if he would be interested in publishing the anthology. He told me that he
would on two conditions: First, his editor, Amanda Pillar, had to approve the
anthology. Second, he would have to pull his story from it for integrity’s
sake. I agreed to both conditions. Though, I was sad at the loss of his story.
I thought it was one of the strongest in the book.

The
Grants Pass
anthology of
today is different than the one I started in 2004 and, yet, the spirit of what
I created is still there. Only better. I have learned much working with Amanda
and Morrigan Books as we brought
Grants Pass
to life, and I appreciate
the effort that goes into creating and publishing a quality anthology.

Five years from conception to
publication is a long time. It was hard work but, in the end, I believe it was
worth it. This book represents many of my own hopes and dreams for the future,
just as the stories within speak of trials overcome, strength of wisdom, hopes,
dreams, and sacrifice in a post apocalyptic world that has not yet come to
pass.

But what if it did?

Where would your
Grants Pass
sanctuary be?

When Jennifer approached Morrigan
Books with
Grants Pass
, Mark asked me to read the collection. He gave me
a rundown of its concept, told me he had a story in the anthology and emailed
the MS over.

I scanned the contents page and
hunkered down with a can of Pepsi, my personal addiction. I read the journal
entry and was hooked on the concept. I had to finish the whole thing.

I knew some stories weren’t going to
make the final cut, and emailed Mark my thoughts immediately: We had to have
the anthology, but we had to make some changes. I also emailed Jennifer with
the same information, and naturally, she was reserved. Mark read the anthology
and agreed.

I arranged an IM meeting with
Jennifer and revisited the Destruction of Humankind. Since I have a background
in science, I was harsh with the former guidelines. I emailed Russell
Kirkpatrick — a fellow author and lecturer — for advice on global warming, and
set about restructuring the apocalypse. It had to be as realistic as possible.
After a few hours, and Jennifer probably wanting to commit murder a few dozen
times, the guidelines were updated. We then made the final cut as some stories
no longer worked with the anthology.

I emailed all the authors to update
them. I felt horrible, but knew the anthology needed the change. We took on new
authors with new stories with the request: We want stories set outside the USA.

And we got them.

Why outside the US of A? This was my
fault. I thought that Jennifer’s story,
The Chateau de Mons
was great,
and Mark’s tale,
Russian Roulette
, also set in Europe, gave a new sense
of desperation and hope to the anthology. But we couldn’t use Mark’s, so that
reduced the number of non-USA stories. So I asked for more, as their tales made
me ponder the concept that everyone would have an individual version of Grants
Pass, if the real Grants Pass was inaccessible.

Would I travel to Grants Pass? No, I
can’t say that I would. But that’s because I live on the other side of the
world, in a remote country, with an extremely harsh climate that is completely
surrounded by sea. Australia.

Would I have my own, personal Grants
Pass? Yes. But you will have to read the anthology to find out where that might
be.

An Unkindness of Ravens:
Stephanie Gunn

The Few that are Good
: Scott Almes

The Discomfort of Words
: Carole
Johnstone

By the
Sea
: Shannon Page

About the Cover Artist

This post is semi-in-cheek and
semi-not. Occasionally, it amuses me to think about these things. The short
version of my thought is this: When the end of the world comes, meet me in
Grants Pass, Oregon.

I’m not saying that the end of the
world is coming. I don’t know if it will happen in my lifetime or if at all.
But, as a writer, I often ask “What if…?” What if something like Skippy the
Super flu virus happens? What if something like “The Day After Tomorrow” happens?
What if we are invaded or World War III happens? Better yet, what if, for some
reason, the government and known society collapses due to a great loss of life
and/or immense structural damage…and I survive it?

Well, my plan, as of now, is to meet
Monte in Grants Pass. Why Grants Pass? Because I have dreamt of the coming of
the end of the world several times. In my dreams, as the End comes, I always
wind up in Grants Pass and that’s good enough for me. Why Monte? Because he’s a
good friend, and he indulges my whims when I present him with these mental
exercises. And because he has become one of my dream symbols representing
Survival. Just like the few times I dreamt of Ice, who represented Leadership
and Yony, who represented Desire.

Recently, I mentioned this to Ice
and invited him to meet us. If anyone is going to survive the end of the world,
it would be him. Then, James jumped in and said it sounded like a plan and he
would meet us there, hauling fuel. Suddenly, it occurred to me that maybe I
should just let others in on this little plan of mine.

Obviously, not everyone who reads
this would survive an apocalypse. Maybe I would not survive it. My desire for
immortality says I would, but that’s just me. In any case, if the apocalypse
comes, and you’re a good person who wants to survive with other good people,
meet us in Grants Pass. Think about what you would bring. Think about joining a
surviving band of people from all walks of life.

I know. I know. This is a silly
mental exercise but there is no harm in thinking about it. Which leads to more
questions: How would I get there? Would I go by car, more secure and sheltered,
but meaning that I have to travel ruined roads? Or a motorcycle for
maneuverability? Bicycle for the lack of dependence on fuel and ability to
easily bypass obstacles…but with more exposure and slower travel time?

What would I bring with me? Fuel?
Food? Water? Weapons? Probably all of the above. I think REI would be the first
place I would raid. Wouldn’t you raid a giant sporting good store for camping
and survivalist gear first?

I know I would try to contact
friends by cell phone or IM as long as the electricity lasted. Mostly to see if
they were still alive and coming to Grants Pass. Of course, if the end of the
world is like “The Stand” and Mother Abigail is saying we should come to
Colorado, well, I guess Grants Pass would be the meeting and staging point for
it. It is better to travel in groups, I think. Especially if you have both
human and animal predators out there, which I think would be the case.

You can’t tell me that some survivor
(probably male), wouldn’t get it in their head to become some sort of warlord
and try to rule their own little bit of land. You know it would happen.
Personally, I’d rather band together with people I already know than some
random tough guy who has figured out how to rule through strength and fear.
Though, I admit, not all warlords would be bad. Generally, things go better
when there is a clear leader in a group; someone with the ability to make
decisions quickly.

Still, coming up with a way to
protect and feed a group of people during and after some sort of apocalypse
brings to mind some interesting ideas. Some of it goes back to my parents’
lessons on wants versus needs. Needs would be paramount — food, shelter,
protection. Wants would have to be indulged when it was possible and safe to do
so. But, one person’s need could be another person’s want. It can be very
subjective. That’s where we come back to the importance of leadership. Someone must
be the parent and the bad guy for your own good.

Now, I’m randomly babbling. In a
time of crisis, having a plan can make the difference between life and death.
If an apocalypse comes and you survive, think of me and then head to Grants
Pass.

My whimsy could save your life.