Read I Sank The Bismarck Online

I Sank The Bismarck 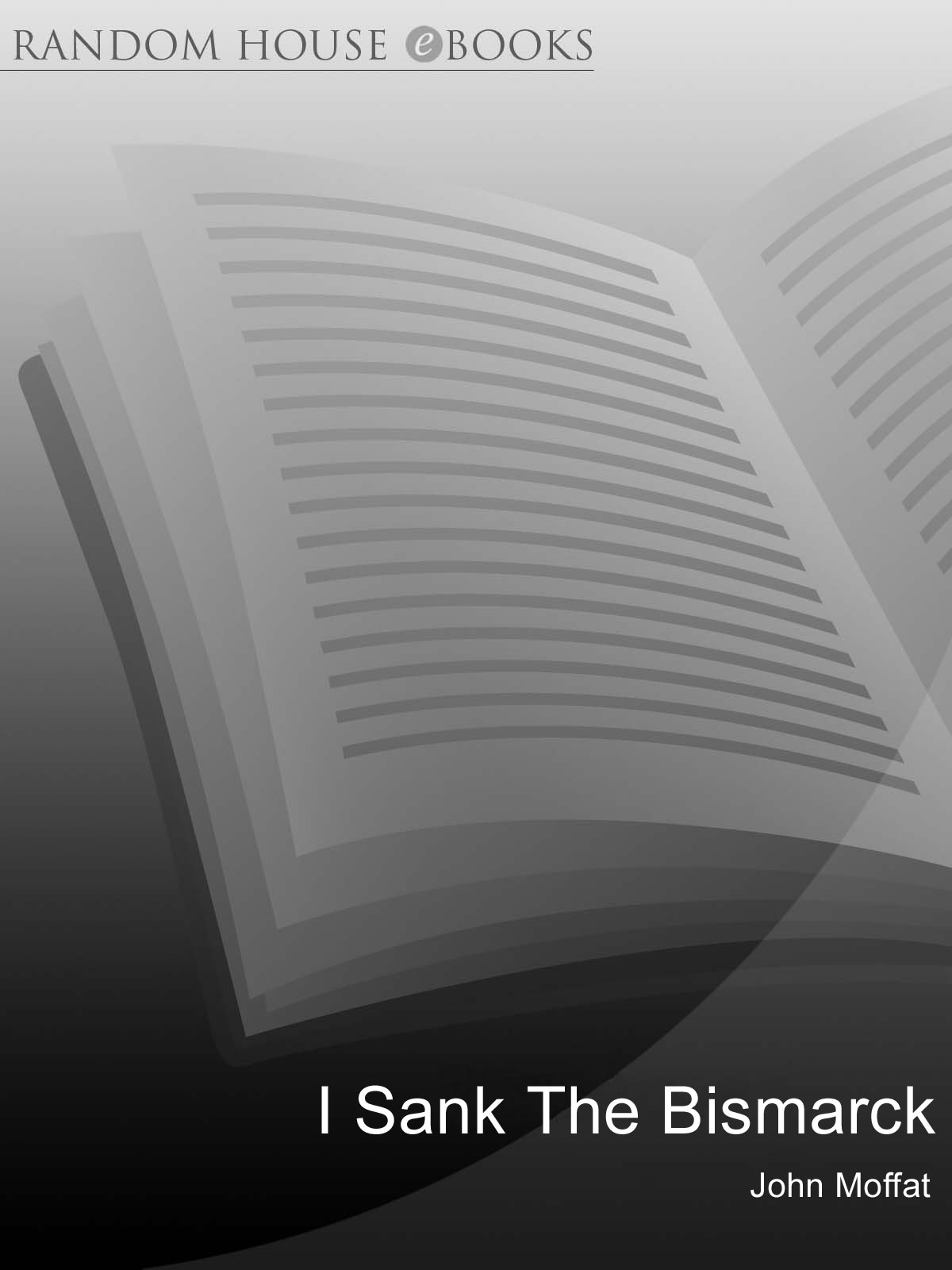 John Moffat
was nineteen years old when he joined the
Ark
Royal
and is the only surviving member of the group of fifteen
pilots who sank the
Bismarck.
John continued to fly until very
recently, and now lives in Scotland, but frequently gives talks
at airshows and events around the UK.

I SANK THE BISMARCK

I SANK THE
BISMARCK

This eBook is copyright material and must not be copied, reproduced, transferred, distributed, leased, licensed or publicly performed or used in any way except as specifically permitted in writing by the publishers, as allowed under the terms and conditions under which it was purchased or as strictly permitted by applicable copyright law. Any unauthorised distribution or use of this text may be a direct infringement of the author's and publisher's rights and those responsible may be liable in law accordingly.

John Moffat and Mike Rossiter have asserted their rights under the Copyright,
Designs and Patents Act 1988 to be identified as the authors of this work.

A CIP catalogue record for this book
is available from the British Library.

This electronic book is sold subject to the condition that it shall not by way of trade or otherwise, be lent, resold, hired out, or otherwise circulated without the publisher's prior consent in any form other than that in which it is published and without a similar condition including this condition being imposed on the subsequent purchaser

John Moffat would like to dedicate this book to the memory
of his lovely wife Marjorie, who shared his life for 58 years;
their two daughters Pat and Jan, who encouraged him to
write about his life; and his four grandchildren, Nicole,
Amanda, Ian and Valerie.

Mike Rossiter would like to thank the Headmaster of Kelso
High School, and the former crew members of HMS
Ark
Royal
for their help in researching this book. Also the assistance
of his agent Luigi Bonomi, editor Simon Thorogood, and
copy-editor Brenda Updegraff are gratefully acknowledged.

I slid the canopy of my Grumman single-engined aeroplane
shut and tightened my safety harness, then pushed the yoke
forward so that I could turn to the passenger seat to see if Ian
needed any help to strap himself in properly. He was a smart
lad, but he was just nine years old. I wanted to make sure he
was safe.

It was a lovely September evening in the year 2000. I was
eighty-one years old and had brought up two daughters, but
now I had a grandson, and I loved him. It was funny how life
turned out. He had just started playing rugby at school and I
had given him a few tips that his mother thought were more
suited to the adult game than to a prep-school team, but he
was coming on a treat.

I looked through the windscreen: some slight cloud cover,
with a south-westerly wind of about 5 knots. We were on a
small grass airfield on the Isle of Bute, with a runway length
of 1,300 feet. We were about 1,730lb in weight and should be
able to take off in about 800 feet, giving us plenty of room.

I made sure the handbrake was on, then pressed the starter
motor. The Lycoming engine turned over, once, twice, three
times, then it fired up. The twin-bladed propeller became a
blur in front of the engine cowling and I waited for the
temperature and the oil pressure to stabilize. Everything
looked fine. I released the handbrake, eased a touch on the
throttle, and the plane moved forward, trundling over the
grass to the end of the strip.

I was going to make what is called a performance take-off,
which I think is the safest option. You hold the plane on the
brakes until the engine is running at full power, then you
release the brakes and take off in half the recommended
distance. Grumman's handbook for the AA-5 suggests taking
off with no flap – the sections at the rear of the wing that, if
moved down, provide more lift – but you can get a higher rate
of climb with 10 degrees of flap and so I selected this with the
flap lever, then with the handbrake on again increased the revs
to full power. The orange windsock hung loosely, barely
extended in the light breeze. Everything was clear above and
behind. I patted Ian on the knee and released the handbrake.
We were lightly loaded, and the air-speed indicator quickly
started rising.

We had rolled for about half our take-off distance when the
engine started misfiring. The r.p.m. needle was bouncing up
and down, and there were more misfires. We were travelling
more slowly than we needed to be at this stage of the take-off,
but we still had some distance left on the runway. I could keep
going and hope that the engine would give us enough power
to take off, but then I could be faced with having to crash
straight ahead if it cut while we were struggling for height. I
quickly decided that I was not going to risk it.

'Oh Christ, this would happen,' I thought. I cut the engine
and tried to put on the brakes, but we were still moving at
close to our lift-off speed. There was a hump in the grass strip
at the end of the runway: we hit it, bounced up from it and
rose into the air. Then we dropped again as the undercarriage
hit the hedge.

'Hang on!' I shouted and put out my arm to protect Ian.
Then, as clods of earth and grass hit the windows, we banged
and scraped along, and finally smashed into a deep ditch.

The silence as we came to a halt was eerie. I was desperate
to get Ian out in case we caught fire. The poor lad was sitting
there, trying to gather himself together, and I undid his
straps. The canopy still opened, thank God, so I slid it back
and told him to get out and run to the edge of the field. Once
he had gone, I slowly undid my own straps and climbed out.
I couldn't move as fast as I would have liked, and I had been
shaken about by the impact. Ian was looking at me anxiously,
so I walked over to him and said as reassuringly as I could,
'Not to worry, son – we're fine.'

I didn't feel fine. I was shaken up and I knew that actually
we were lucky not to have been hurt. The plane, which I coowned,
was damaged – how badly I didn't know at the time,
and probably wouldn't until an engineer had had a good look
at it. It might be a write-off. I didn't yet know why the engine
had failed. As far as I was aware, there was no water in either
the tank or the lines. There were bound to be gentle hints that
maybe a man of my age should hang up his flying helmet, and
similar talk.

All this was going through my mind – but, thank God, Ian
was safe.

A couple of men came running from the airstrip, one of
them carrying a fire extinguisher, and told me that they had
called the Royal Naval Air Station (RNAS) rescue helicopter
from the mainland and it should be here in a few minutes. It
was too late to protest that we were really not hurt at all.

Sure enough, ten minutes later a Sea King helicopter
swooped over us, its turbines whining and its rotors clattering.
This would be a flight that Ian hadn't bargained for, and
I hoped it would be exciting enough to lessen the shock of our
crash. The young winchman got out, looked us over, and said
that he would take us to hospital for a check-up as a
precaution. He lifted Ian in, then helped me up the steps into
the cabin.

We lifted off, the young man sitting opposite us in his
polished black flying boots and green flight overalls, a
whippersnapper probably still in his twenties. While he talked
to the pilot over his intercom, he was also looking at me
slightly quizzically. I imagined he was probably thinking,
'What's an old crock like this doing trying to fly?' but then he
said, 'I think you and I have met before, sir.'

I must say I couldn't place him, but ten minutes later he
said, 'I know – we met when you were guest of honour at
HMS Gannet for our Taranto Night dinner, sir.' HMS Gannet
is the Fleet Air Arm air-sea rescue base at Prestwick airport.
They, like other Fleet Air Arm bases, celebrate the
attack on
the Italian fleet moored in Taranto harbour on 11 November
1940, when twenty-one Fairey
Swordfish torpedo bombers
flew in and sank several Italian warships, inflicting as much
damage as they might have suffered in a major sea battle. By
the year 2000 very few of the thirty or so who had flown on
that historic mission were still alive. I had not taken part in
the raid on Taranto, but I had flown Swordfish aircraft in the
Second World War, against the Italians in the Mediterranean
and the Germans in the Atlantic, and as someone who knew
what it was like, I was often asked to attend these annual
celebrations.

'I certainly recognize you, sir,' the young man continued.
'You were one of those who hit the
Bismarck.
'

My hesitation must have shown, because he went on, 'You
must remember, sir – that was the night that we set light to the
piano.'

The wardroom had become rather raucous after the toasts
and, typically, someone had sat down at the piano and started
playing tunes from the
Fleet Air Arm Song Book,
and we had
sung away to our hearts' content. Some of the men had
poured rum into the top of the piano and set light to it, and,
as it was wheeled outside burning vigorously, others were
pushing the pianist along with it and he was still playing
away. It took me back to the days when, as a young sublieutenant,
I was roused from my bunk to hammer out some
tunes on the wardroom piano – but pianos were not easy to
replace at sea during a war, so we refrained from setting light
to ours. I enjoyed myself so much that night at HMS Gannet
that I offered to help them pay for a new piano, but they
wouldn't hear of it. 'We never spend much on a wardroom
piano,' I was assured.

Our companion and I talked a bit about the dinner, then we
landed at the hospital. The pilot and co-pilot also wanted to
shake my hand and wish me luck, and then they were off.

Feeling my grandson's hand in mine, I looked down at him.
'Grandad,' he said, 'why were you at their dinner, and why
did they set light to the piano?'