Read In His Will Online 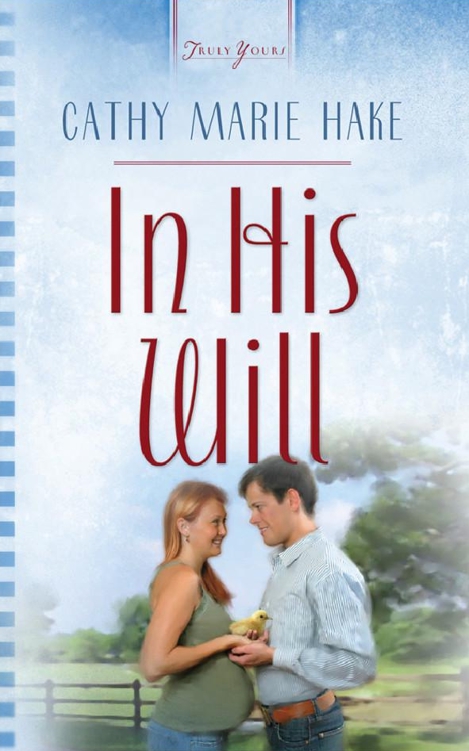 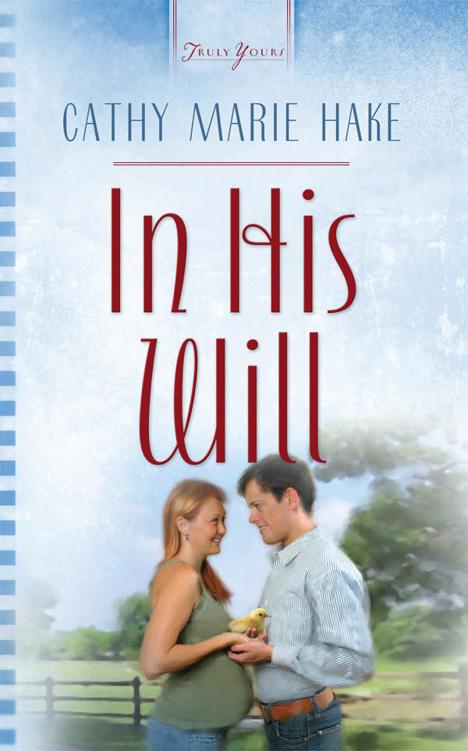 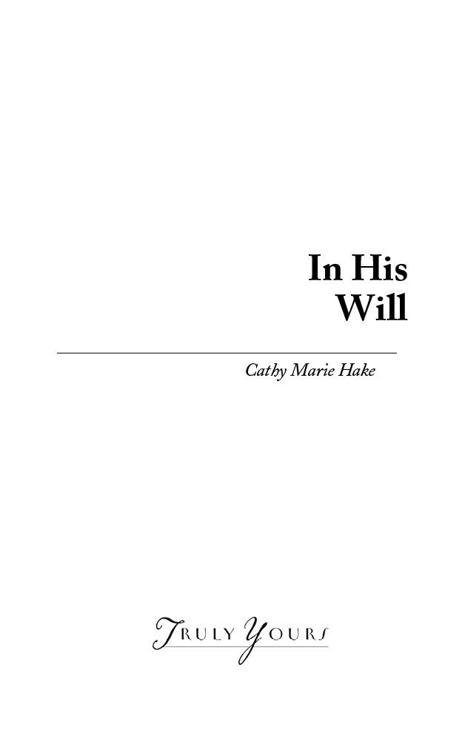 Copyright © 2006 by Cathy Marie Hake. All rights reserved. Except for use in any review, the reproduction or utilization of this work in whole or in part in any form by any electronic, mechanical, or other means, now known or hereafter invented, is forbidden without the permission of Truly Yours, an imprint of Barbour Publishing, Inc., PO Box 721, Uhrichsville, Ohio 44683.

All of the characters and events in this book are fictitious. Any resemblance to actual persons, living or dead, or to actual events is purely coincidental.

Our mission is to publish and distribute inspirational products offering exceptional value and biblical encouragement to the masses.

“The old man’s gone to the Big Daddy in the sky.”

Dylan Ward winced. The opening remark set the tone for a memorial service that turned into a full-fledged travesty. No respect. No reverence. No words of redemption. Their pastor from back home got sick, so the funeral home hastily plugged in a replacement. Though he didn’t hold with judging another man’s walk with the Lord, Dylan suspected this so-called preacher had gotten his degree from a matchbook cover. While leading them in the Lord’s Prayer, he flubbed the recitation in several spots.

Following that debacle, Miller Quintain’s relatives each gave eulogies revolving around memories of his financial generosity. Their words became a can-you-top-this, he-loved-me-most competition.

Unwilling to let a good friend’s life be summed up in such shallow terms, Dylan rose and buttoned his suit coat as he walked to the front of the chapel. Turning to face the small collection of people, he caught sight of a woman who must have slipped in late. She sat at the very back, alone. Over her black dress, she wore a blue-and-green plaid flannel shirt. Everything about this funeral was surreal.

Dylan looked at the rose-decked casket, then faced the room. “When I was seven, Miller Quintain told me a man can live with gritty hands and muddy boots, but he’s got to have a clean heart. . . .”

A short while later, Miller’s relatives jockeyed for one of the four seats at the graveside. If last night’s storm hadn’t softened the hard-packed Oklahoma soil, their crocodile tears could. Dylan stood off to the side and understood why Miller specified the service was for family only. He’d been a simple man who didn’t want a lot of fuss and wouldn’t want the folks back home to witness a circus like this.

Things would get much worse before the day ended. After several years of open discussion, Dylan knew what Quintain’s will would hold. Miller warned him to expect a nasty scene once these greedy relatives discovered they weren’t inheriting his fortune.

The woman in the flannel shirt walked the long way around the cemetery and silently took a place a few feet from Dylan. High cheekbones and slightly slanted green eyes set her apart—she didn’t look anything like Miller’s relatives. She’d put her mahogany-red-colored hair into a sophisticated bun at the top of her head and probably used half a can of hairspray today to keep it under control. Small wisps teased their way free and coiled into twirly, springy tendrils.

The way she clutched a bunch of wildflowers to her heart touched Dylan—not only because of her sorrow, but also because of the devotion it revealed. Instead of buying something, she must’ve gotten up early to gather the bouquet from the Oklahoma countryside Miller had loved. Silently, she slipped forward, laid the offering by the head of the casket, and stepped back.

The substitute showed up and nervously rubbed his hands together. “You’ve already said your good-byes. It’s an emotional time. Why don’t we say the Twenty-second Psalm together in closing?” He looked at the redhead. “Do you know it? Would you like to start us off?”

She gave him a baffled look, seemed to think for a moment, and slowly nodded. “My God, my God, why have you forsaken me? Why are you so far from saving me, so far from the words of my groaning? O my God, I cry out by day, but you do not answer, by night, and am not silent.”

“No, no. That’s not it.” The preacher’s brows beetled.

Dylan looked at the woman, astonished she’d been able to remember that passage. “What about the Twenty-third Psalm?” They made eye contact, and she nodded. He started out, and she joined in, “The Lord is my shepherd. . .”

At least they could make this right.

Sondra Thankful huddled in Kenny’s old shirt. It offered little solace. Grief crashed over her. First her husband, then her dear friend, Miller.
God, why is it Your will for me to be alone?

The minute the prayer ended, Miller’s relatives started to bicker. Sondra backed away from the ugliness. She’d forgotten how her heels sank into the ground at Kenny’s funeral until they did the same thing now.

“Careful.” The tall man who’d recited the Psalm braced her elbow for a moment. From what he said during the service, she knew who he was: Dylan, the neighbor Miller thought of as a son.

Sondra subtly took stock of him. His warmth and spicy aftershave filled her senses as his six-foot height and broad frame blocked the wind. Steady gray eyes seemed to search out details and file them away, and the shadow on his square jaw made it look as though he’d spent a less than restful night. The wind played havoc with his fine black hair, and his charcoal gray suit jacket gaped as he raised a hand to shove back a lock of it. He looked ill-at-ease in the suit, and freshly polished cowboy boots made it clear where he’d rather be.

“That means a lot—especially today.” He studied her for a long moment. “He was pretty cryptic about you. All I know is that you’re a teacher and volunteer at a children’s group home here in Lawton. He used to loan you baby chicks.”

“Mmm-hmm. I posted a note in several feed stores, asking if someone would let me borrow chicks for troubled children to hold. Only one rancher in the whole area responded—Miller Quintain.”

“That’s Miller,” Dylan confirmed with a decisive nod. “The man had a knack for filling the empty places in other people’s lives.”

“He did.” She turned to stare at the horizon.

“They’re teeny and light—quiet, too. Even the smallest child can cradle one. It’s great therapy for kids who’ve gotten beaten up by life. When they feel completely out of control, it helps to have something soft and warm to hold on to.”

Dylan’s gaze dropped to her hand. Sondra hadn’t realized she’d bunched the flannel shirttail in her palm until his eyes narrowed. Just as quickly, compassion softened his features.

“Excuse me.” Overwhelmed by grief, Sondra barely choked out the words and turned away. Her heel sank in the grass as she buried her face in her hands and wept.

“Whoa. Easy there.” Dylan gathered her closer to his side and cradled her head to his chest. He didn’t shush her or even say anything more; he merely held her as she sobbed. When she started to calm down, he pressed a handkerchief into her hands. “Here.”

“Thanks.” She pulled away and dabbed at her eyes. “I’m going to miss him so much.”

“So will I.” Dylan’s solemn voice carried the ache of deep loss. Sondra sensed his presence at her side as they walked across the cemetery.

A man in a custom-tailored suit who’d been on the fringes of the funeral stood at the curb. He raised his voice because of the wind. “Are you Sondra Thankful?”

“I’m Geoffrey Cheviot of Cheviot, Masters, and Associates. My apologies that I relied on my secretary to call you. You are coming back to the office?”

Sondra gave him a baffled look. “I don’t belong.”

“Mr. Quintain was an old-fashioned man. He specified his last will and testament was to be read following the service.” The attorney’s face reflected no emotion as he added, “Miller requested you be present.”

“Who is she, anyway?” one woman wondered aloud. Miller Quintain’s relatives all suddenly focused on her—but their interest carried more malevolence than curiosity.

Put in that light, she didn’t give it further consideration. “I’ll be there.”

The attorney smiled with unmistakable relief. “Good. I’ll see you at the office.”

Dylan kept hold of Sondra and headed toward the parking lot. She inched closer to him, both for warmth and protection. The wind carried a chill, but the stares of Miller’s relatives were downright frigid. Dylan halted for a split second to allow the wind to buffet a crinkling sheet of newspaper across their path, then continued on. “Which car is yours?”

“My ride’s just around the corner.”

He leaned forward and looked past her. “The bus?” Incredulity filled his voice.

“I’ll give you a ride.” He nodded decisively. “We’ll swap stories about Miller.” He strode along until they made it to a well-kept, older pickup.

Dylan shook his head. “I’ll put you in a cab. You can’t wait in the cold and ride on a crowded bus.”

She couldn’t afford to pay for a cab.
Miller trusted him, and the lawyer knows I’m with him.
She gave him a sad smile. “I’m not very good company today.”

“Neither am I. Here.” He unlocked and opened the door.

Once in the truck, Sondra fell silent. They both stared out of the windshield. Yesterday’s thunderstorm hadn’t lost steam until early this morning, and the clouds hung low, like ominous, gray monoliths in the vast Oklahoma sky. Dreariness coated Lawton as Dylan drove through the streets.