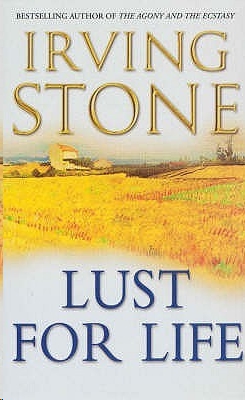 THE PRINTING HISTORY OF

Lust for Life has been translated into the Czech, Danish, Dutch, Finnish, French, Norwegian, Polish,
Portuguese and Swedish languages.

This Pocket Book edition is published by arrangement
with Longmans, Green & Co., Inc.

The Pocket Book edition goes to press as we are celebrating the eleventh anniversary of the publication of
Lust for Life.
This thought gives me double pleasure: in a country where more than ten thousand new volumes are published each year, it is not often that a novel enters its second decade with a sustained reader interest. The other half of my pleasure is that Vincent Van Gogh and his life story will now reach the vast Pocket Book audience, at the price of a couple of candy bars or a ticket of admission to a third-run movie house. This is the revolution in book publishing for which I have waited all my writing years.

I have been asked countless thousands of times, "How do you pronounce his name?" Vincent Van Gogh was a native Hollander, and so the technically correct pronunciation would be
Van Hchuuchch,
an almost impossible sound for Americans to make. Since the greater part of his creative painting was done in France, his name is occasionally pronounced with the French
Van Gogk.
However we in this country have no need to use either of these difficult pronunciations; we can simply call him Vincent
Van Go,
and be completely correct.

Van Gogh has been taken to the hearts of millions of Americans, most of whom think of him as a beloved friend. The elements of heroic struggle and even more heroic conquest in his brief span somehow call forth the tenderest sympathy of our people. Then, too, there is his fantastically inverted success story: during the ten years of his mature work he painted some six hundred oils and made over eight hundred drawings. At the time of his death he had sold only one painting, and this for a few dollars to the sister of a fellow Dutch painter. Yet today his major canvases are worth from fifty to one hundred thousand dollars each, and the total value of his entire output would run between twenty and thirty million dollars.

Vincent would not have been impressed by these astronomical figures, for he cared little about money. All he wanted was to understand life, and to paint it.

To the memory of my mother

1. Third Class Carriage; 2. The fraternity of fous; 3. An old crock is an old crock.; 4. "I discovered painting when I no longer had teeth or breath."

1. The first one-man exhibition; 2. A specialist in nervous diseases; 3. One cannot paint good-bye; 4. A more resilient earth; 5. "And in their death they were not divided."

The self-portrait of Van Gogh which appears on the cover of this book is used by courtesy of the Netherlands Bureau of Information.

"Monsieur Van Gogh! It's time to wake up!"

Vincent had been waiting for Ursula's voice even while he slept.

"I was awake, Mademoiselle Ursula," he called back.

"No you weren't," the girl laughed, "but you are now." He heard her go down the stairs and into the kitchen.

Vincent put his hands under him, gave a shove, and sprang out of bed. His shoulders and chest were massive, his arms thick and powerful. He slipped into his clothes, poured some cold water out of the ewer, and stropped his razor.

Vincent enjoyed the daily ritual of the shave; down the broad cheek from the right sideburn to the corner of the voluptuous mouth; the right half of the upper lip from the nostril out, then the left half; then down the chin, a huge, rounded slab of warm granite.

He stuck his face into the wreath of Brabantine grass and oak leaves on the chiffonier. His brother Theo had gathered it from the heath near Zundert and sent it to London for him. The smell of Holland in his nose started the day off right.

"Monsieur Van Gogh," called Ursula, knocking on the door again, "the postman just left this letter for you."

He recognized his mother's handwriting as he tore open the envelope. "Dear Vincent," he read, "I am going to put a word to bed on paper for you."

His face felt cold and damp so he stuck the letter into his trouser pocket, intending to read it during one of his many leisure moments at Goupils. He combed back his long, thick, yellow-red hair, put on a stiff white shirt, low collar and a large knotted four-in-hand black tie and descended to breakfast and Ursula's smile.

Ursula Loyer and her mother, the widow of a Provençal curate, kept a kindergarten for boys in a little house in the back garden. Ursula was nineteen, a smiling, wide-eyed creature with a delicate, oval face, pastel colouring and a small, slender figure. Vincent loved to watch the sheen of laughter which, like the glow from a highly coloured parasol, was spread over her piquant face.

Ursula served with quick, dainty movements, chatting vivaciously while he ate. He was twenty-one and in love for the first time. Life opened out before him. He thought he would be a fortunate man if he could eat breakfast opposite Ursula for the rest of his days.

Ursula brought in a rasher of bacon, an egg, and a cup of strong, black tea. She fluttered into a chair across the table from him, patted the brown curls at the back of her head, and smiled at him while she passed the salt, pepper, butter and toast in quick succession.

"Your mignonette is coming up a bit," she said, wetting her lips with her tongue. "Will you have a look at it before you go to the gallery?"

"What a droll person he is! He plants the mignonette himself and then doesn't know where to find it." She had a habit of speaking about people as though they were not in the room.

Vincent gulped. His manner, like his body, was heavy and he did not seem able to find the right words for Ursula. They went into the yard. It was a cool April morning, but the apple trees had already blossomed. A little garden separated the Loyer house from the kindergarten. Just a few days before, Vincent had sown poppies and sweet peas. The mignonette was pushing through the earth. Vincent and Ursula squatted on either side of it, their heads almost touching. Ursula had a strong, natural perfume of the hair.

"Yes?" She withdrew her head, but smiled at him questioningly.

"Dear me, what can you be stuttering about?" she asked, and jumped up. He followed her to the door of the kindergarten. "My
poupons
will be here soon," she said. "Won't you be late at the gallery?"

"I have time. I walk to the Strand in forty-five minutes."

She could think of nothing to say, so she reached behind her with both arms to catch up a tiny wisp of hair that was escaping. The curves of her body were surprisingly ample for so slender a figure.

"Whatever have you done with that Brabant picture you promised me for the kindergarten?" she asked.

"I sent a reproduction of one of Caesar de Cock's sketches to Paris. He is going to inscribe it for you."

"Oh, delightful!" She clapped her hands, swung a short way about on her hips, then turned back again. "Sometimes, Monsieur, just sometimes, you can be most charming."

She smiled at him with her eyes and mouth, and tried to go. He caught her by the arm. "I thought of a name for you after I went to bed," he said. "I called you
l'ange aux poupons
."

Ursula threw back her head and laughed heartily.
"L'ange aux poupons!"
she cried. "I must go tell it to Mother!"

She broke loose from his grip, laughed at him over a raised shoulder ran through the garden and into the house.

Vincent put on his top hat, took his gloves, and stepped out into the road of Clapham. The houses were scattered at this distance from the heart of London. In every garden the lilacs and hawthorn and laburnums were in bloom.

It was eight-fifteen; he did not have to be at Goupils until nine. He was a vigorous walker, and as the houses thickened he passed an increasing number of business men on their way to work. He felt extremely friendly to them all; they too knew what a splendid thing it was to be in love.

He walked along the Thames Embankment, crossed Westminster Bridge, passed by Westminster Abbey and the House of Parliament, and turned into number 17 Southampton, Strand, the London quarters of Goupil and Company, Art Dealers and Publishers of Engravings.

As he walked through the main salon, with its thick carpets and rich draperies, he saw a canvas representing a kind of fish or dragon six yards long, with a little man hovering over it. It was called
The Archangel Michael Killing Satan.