Make Me Yours Evermore, Book 3 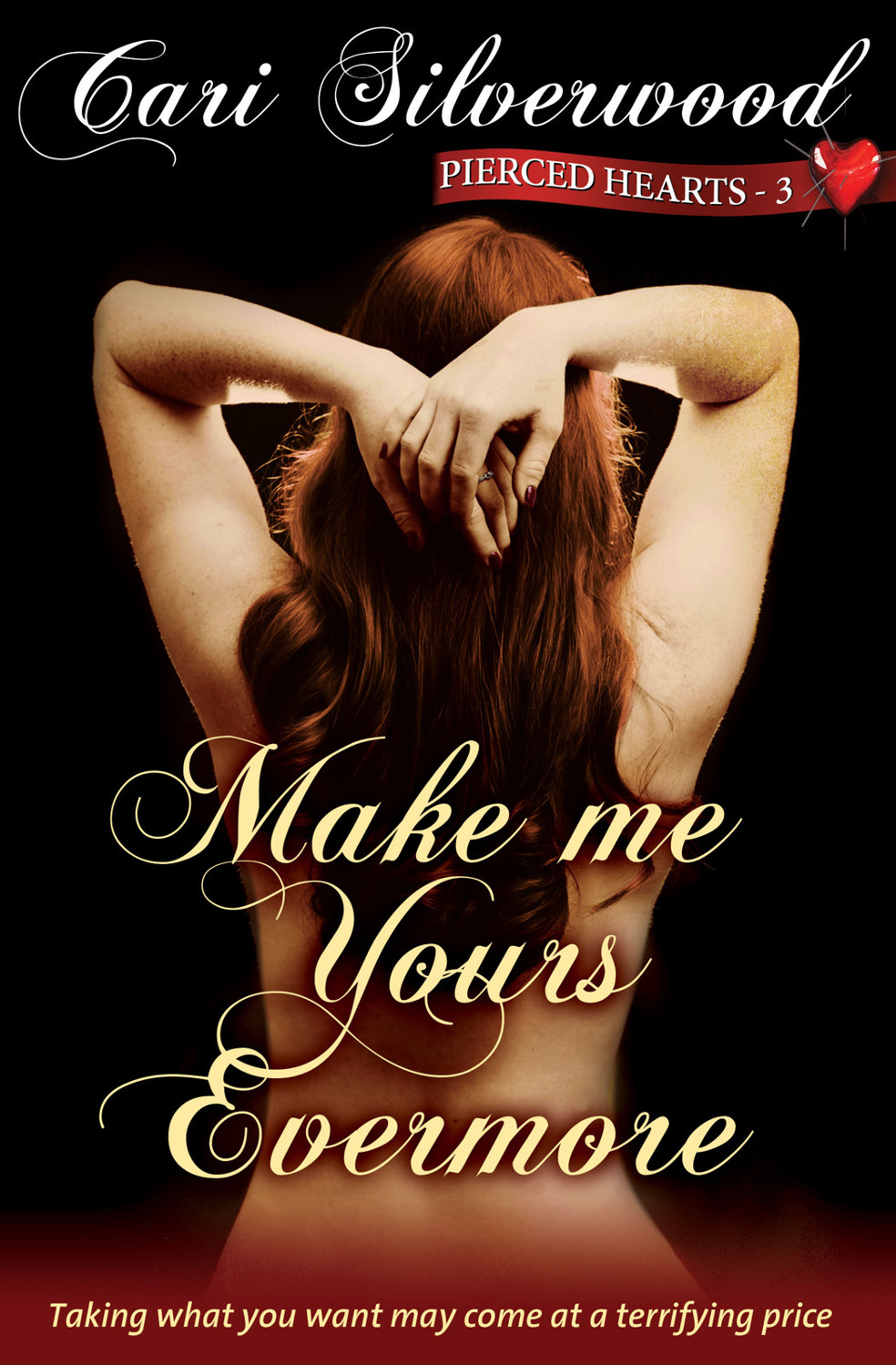 Taking what you want may come at a terrifying price.

Chris calls his darkest, nastiest fantasy into the light of day when he has to kidnap Kat to save a friend. For years, he’s wanted to bring her to her knees.

But claiming her draws attention. Andreas wants to save Kat, until he sees her response to raw male dominance.

More dangerous are the human traffickers, who regard the acquisition and selling of women as a very high stakes business. And they're watching. Everything.

Death. The perversion of love. The loss of freedom.
Sometimes there is no choice.

Make me Yours Evermore

Taking what you want may come at a terrifying price

All rights reserved. This copy is intended for the original purchaser of this e-book only. No part of this e-book may be reproduced, scanned, or distributed in any printed or electronic form without prior written permission from the author. Please do not participate in or encourage piracy of copyrighted materials.

Once more I owe a debt to those who have helped me figure out where I went wrong with my writing of this book. Whenever I did wander off the beaten path, I had my wonderfully insane crit partner Sorcha Black there to smack me over the head with something and bring me to my senses. Thank you. The MRI came out normal.

Take me, Break me

Bind and Keep me

Make me Yours Evermore

This book is set in Australia and contains some Aussie phrases, such as 4WD being used instead of SUV. To find out the meaning of most of them go to the glossary
here
.

Dark. Then light filtered in. The fluttering wash of light, dark, light, dark occupied me as we bumped over something. My shoulder would feel numb and I’d shift but my hands were tied. Not much I could do.

That thought popped up and stayed a while before it drifted away like so many others. My heart beat erratically. My thoughts followed like sheep. I struggled and caught that thought again. Bondage wasn’t my thing. Then what was I doing tied up? My wrists were trapped before me. My ankles were caught. My mouth had something in it. My eyes were blind and I couldn’t lift my eyelids – trapped also. A blindfold?

Chris.
Panic slithered in and with it came clarity.
Fuck him.
He’d done this. I needed to get loose. I bit down on the gag as I writhed, but solid walls encased me and the gag stayed where it was. I lay on my side. My elbow thumped painfully into something above me. My bare toes did too at my front. My breathing rasped wetly, bubbling past the thing in my mouth. Just lifting my ribs became a hundred, thousand times more important than
anything.

I dragged in air as something rocked whatever coffin it was I occupied. Distant voices. Man? Or more? Men? There seemed two different voices.

My teeth sank into rubber. My tongue tip slipped over the wet roundness.

“I’m going to get into your head right there. Where you can never ever get me out.”

“You’re going to be blind for a few days. When I take this off, you’ll be somewhere far from civilization. There will be no one who can help you. There will only be me.”

I knew where I was. There’d been an engine noise before, long ago. A car. He had me in a car. I slumped. Drowsiness returned and snuggled into my mind. I was hot and tired and breathing meant more to me than getting loose.
Breathe.
One last kick. Maybe that other man will hear me. Maybe he’ll let me go.

I kicked and nearly broke my toe on timber. But metal creaked and the car rocked again. I listened, ears straining. Waves? Seagulls screeching? Brighter light flared through the tape across my eyes. Someone had turned up the volume on the sound. There were distant voices. Waves. Yes. Was I still on the island?

“Put that down, man. Get out of the car and walk away.”

“The fuck I will. You’ve got a woman tied up in here! What the fuck…is this a scene thing? One of your kinky pretend things?”

“Andreas. You need to leave. Now.”

“Okay. Okay. Sorry. The shit you get up to. Give me a call when you and her have finished fucking your brains out. Or whatever you intend to do.”

Going? He was going? Despite the sogginess permeating my brain, I knew that was bad. I needed to make noise. I tried to speak but only gurgles emerged. I coughed and found liquid clogging my throat where words should have been.

“Fuck. The dose might have been a bit high. Listen. Ignore anything she says.”

Fingers fumbled at my mouth. The thing was pulled from me, leaving my lips feeling bereft without the pressure. I breathed. Deep, cool air. Coughed again. The fog closed in.

Storms ahead.
Words of no sense popped up when I needed sense. What was that other word?

“Andreas. Ignore. You don’t butt in on a scene.”

I swallowed then choked on that word again. “Kidnapped. Please. Need help.” I was blind and my tongue was made of sludge but somewhere in front of me was a man who could save me.

Someone sighed – long and deep. Chris spoke. “Right. Let me explain, Andreas. There are good reasons.”

“Jesus. Reasons?” His voice rose high at the end. A long pause.

“She’s… How can you possibly explain this? You’re more than a brother to me, you know that. But this…this had better be good. Like, I mean, better than anything you’ve ever explained…ever.”

Chris chuckled. That alone made the hairs on my neck rise. So wrong.

“I need to make sure she doesn’t call out. Smaller gag. Okay?”

“Yes. She can breathe through it.”

Though my tongue seemed disconnected from me, though my temples ached with each thump of my blood, I strained to hear. Andreas’s reply was a long time coming.

“Mate, I can’t see how you’re going to get out of this one.”

No way.
I opened my mouth and sucked in air so I could yell only to have another ball pushed into my mouth. I squirmed and tried to shake my head but a hand held my face. My struggles grew weaker. Too much effort. Too much trouble to fight the cold fog that ate my thoughts, leeched at my muscles.

“Good girl,” I heard whispered from inches away. “Stay there quiet while we talk.”

Good? Not me. Not me… Never me. FieryKat. I will fuck you up, boys. Somehow. Just give me time. I will…

Inside me, the black fog spread and swallowed me down.

For once, the view out the windscreen of Chris’s four-wheel drive was dirty. I frowned. In a long wooden box behind these front seats, a woman was…tied up, gagged, and blindfolded. And drugged. While I struggled to cope with that concept, my mind ran off on a tangent.

Ah. You couldn’t see in, could you? Not easily. He’d probably chucked a bucket of dirt over it.

The man, my
friend
, sighed and ran a hand through his sun-bleached blond hair. “Do you want me to explain or would you rather I answer your questions? Andreas?”

I shook my head while I stared past his ear. Then I met his eyes. We’d always been honest with each other. “Does it matter? This is insane.”

Through the dusty glass, I could see other people lounging against their cars. As the bow of the ferry carved the waves, sea water sprayed high into the air. A brisk wind rattled the door and went whistling away. Sunlight glinted warmly off metal. Even with the door shut, we had to raise our voices to be heard over the ferry’s engine noise. All…yeah, fucking normal stuff.

I swallowed. Chris just sat there, giving me time. Least he hadn’t pulled out a knife. But was this the same man I knew?

As if to remind me, a dull knocking came from the box. There were air holes and a metal mesh, but if I heard that gurgly breathing again I was freeing her ASAP.

“Fuck it. What are you doing? Go on. Explain.” I glanced at my watch. “This is surreal. You’ve got ten minutes before we reach the harbor.”

“Truthfully, I’d rather you just leave.”

“And forget I saw this?” I thumbed toward the box. “I can’t. Couldn’t. It’s too late for that.” In a moment of clarity, I was glad I’d decided to get into Chris’s four-wheel drive. Whoever it was back there, she needed me.

Again with the sigh. But otherwise Chris regarded me levelly with his sharp blue eyes. Not hostile. We were too close for anything nasty to happen between us.

But I had to do something. “Not tempted to throw me over the side for the sharks?”

“Huh.” Chris glanced down at my arm and the scars throbbed as if the damn thing knew it was getting attention. He shook his head then settled his shoulders back into his door. “No. If you have to go to the cops afterward, I can accept that. Life goes on.”

Christ. The man was always so confident. Not a façade either. Just him. Then his jaw moved as if he were chewing.

Maybe this did bother him? Relief flooded me. I didn’t want to see him as Ice Man. No one normal could brush off abducting someone as casually as if they’d found a new paint color they liked.

“If she gets loose.” He jerked his head toward the back of the car, “A friend is likely to go to jail for ten or more years. What he did was something I would have done, you too maybe. He doesn’t deserve it.”

I blinked, thinking as well as I could. “What did he do?”

“You can’t?” And that made it so much easier for me to judge this. “Then why her? What did she do? Did she make this up? This thing your friend did?”

“No. She snooped where she shouldn’t have.”

“Uh.” I sat back. “So you’ve done this to her…something thoroughly illegal and dangerous that might get
you
in jail for fifty years, let alone ten, because she was nosy?”

Chris rubbed his fingers along the steering wheel. An extra hefty gust of wind shook the vehicle. “Partly that, yes. More that a friend needed help.”