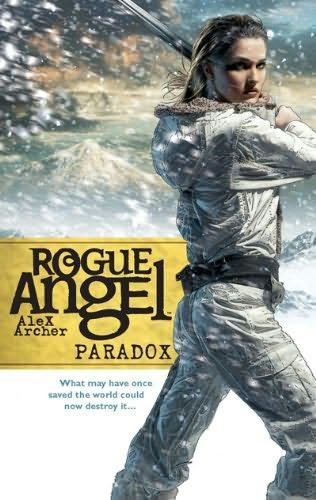 Levi began to
twist alarmingly in his ropes
Annja reached up and grabbed his right boot to stabilize him. Whether the experience
unnerved him or not, he didn't continue the conversation. That suited Annja
fine.
In the early afternoon the storm clouds returned with a suddenness that halfway
tempted Annja to believe in Levi's dueling mountain deities. At almost the same
moment a soft cry came from above and Annja looked up to see Larry's head
silhouetted against the ominous boiling clouds. She could tell he was grinning.
Less than five minutes later Levi and Larry were helping her scramble onto the
top of a gently sloping plain of ice, pierced by snow-mounded juts of rock. A
mile and a half ahead of her rose the snow-covered peak of Ararat. And there, a quarter mile away to the south and west of them, the long, dark mound of
the Ararat Anomaly seemed to hang over the edge of the abyss.

Titles in this series:

…THE ENGLISH COMMANDER TOOK JOAN'S SWORD AND RAISED IT HIGH.
The broadsword, plain and unadorned, gleamed in the firelight. He put the tip
against the ground and his foot at the center of the blade. The broadsword
shattered, fragments falling into the mud. The crowd surged forward, peasant
and soldier, and snatched the shards from the trampled mud. The commander
tossed the hilt deep into the crowd.
Smoke almost obscured Joan, but she continued praying till the end, until
finally the flames climbed her body and she sagged against the restraints.
Joan of Arc died that fateful day in France, but her legend and sword are
reborn….

Winterfrost by Michelle Houts
Naura by Ditter Kellen
The Zed Files Trilogy (Book 1): The Hanging Tree by Wright, David Andrew
The Price of Butcher's Meat by Reginald Hill
By Fire, By Water by Mitchell James Kaplan
The Old Ways by David Dalglish
Green Rider by Kristen Britain
The Girl's Guide to Homelessness by Brianna Karp
Dangerous Pleasure by Lora Leigh
The Marks of Cain by Tom Knox