Pleasure of a Dark Prince 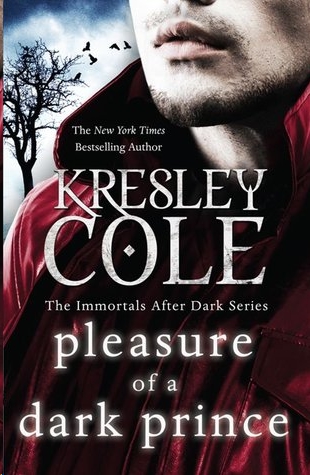 KISS OF A DEMON KING

“Perennial favorite Cole continues to round out her Immortals After Dark world with kick-butt action and scorching passion!”

“Full of magic, mayhem, sorcery and sensuality. Readers will not want to miss one word of this memorable and enchanting tale. The closer to the end I got the slower I read because I knew once the story ended I would be left craving more of this brilliant and emotionally gripping saga…. It is truly one of the most amazing tales Kresley Cole has ever released.”

“Cole deftly blends danger and desire into a brilliantly original contemporary paranormal romance. She neatly tempers the scorchingly sexy romance between Sabine and Rydstrom with a generous measure of sharp humor, and the combination of a cleverly constructed plot and an inventive cast of characters in
Kiss of a Demon King
is simply irresistible.”

Pleasure of a Dark Prince
is also available as an eBook

“The snappy dialogue and sensual tormenting make this the best in the Immortals After Dark series so far!”

“Kresley Cole is a gifted author with a knack for witty dialogue, smart heroines, fantastic alpha males and yes, it has to be said, some of the hottest love scenes you’ll read in mainstream romance…. You’re in for a treat if you’ve never read a Kresley Cole book.”

“A wonderfully romantic tale of two people from the opposite sides of their immortal world…. I’m sure I will re-read
Dark Desires After Dusk
, the love story of Cadeon the rage demon and Holly the halfling Valkyrie many, many times as it was everything I had hoped it to be and so much more!”

“Poignant and daring. You can trust Cole to always deliver sizzling sexy interludes within a darkly passionate romance.”

“The evolution of this romance is among the most believable and engrossing I’ve ever read. Cole’s Immortals After Dark series continues stronger than ever with this latest installment.”

WICKED DEEDS ON A WINTER’S NIGHT

“Leave it to the awe-inspiring Cole to dish up a combustible mix of sorcery and passion. One for the keeper shelf!”

—Romantic Times
(Four and a Half Stars; HOT)

“Kresley Cole… effortlessly delivers heart wringing romance, likeable heroines, hot heroes and hotter sex… set against an original and exciting paranormal mythology that keeps—both the story and the reader speeding along from one high point to another.”

NO REST FOR THE WICKED

“Oh, wow! Kresley Cole writes another spine-tingling, adventurous, and passionate romance…. I recommend readers grab a copy of Kresley Cole’s
No Rest for the Wicked
today. It’s a definite keeper.”

Anthologies
Playing Easy to Get
Deep Kiss of Winter

PLEASURE
OF A
DARK
PRINCE

All rights reserved, including the right to reproduce this book or portions thereof in any form whatsoever. For information address Pocket Books Subsidiary Rights Department, 1230 Avenue of the Americas, New York, NY 10020

POCKET and colophon are registered trademarks of Simon & Schuster, Inc.

Dedicated to the
Immortals After Dark
readers,
for sharing a love of the Lore with me
and for spreading the IAD word.
Thank you all!

T
HE
L
IVING
B
OOK OF
L
ORE

“…and those sentient creatures that are not human shall be united in one stratum, coexisting with, yet secret from, man’s.”

♦ Most are immortal and can regenerate from injuries. The stronger breeds can only be killed by mystical fire or beheading.

♦ Their eyes change to a breed-specific color with intense emotion.

“When a maiden warrior screams for courage as she dies in battle, Wóden and Freya heed her call. The two gods give up lightning to strike her, rescuing her to their hall and preserving her courage forever in the form of the maiden’s immortal Valkyrie daughter.”

♦ They take sustenance from the electrical energy of the earth, sharing it in one collective power, and give it back with their emotions in the form of lightning.

♦ Without training, most can be mesmerized by shining objects and jewels.

“A proud, strapping warrior of the Keltoi People (or Hidden People, later known as Celts) was taken in his prime by a maddened wolf. The warrior rose from the dead, now an immortal, with the spirit of the beast latent within him. He displayed the wolf’s traits: the need for touch, an intense loyalty to its kind, an animal craving for the delights of the flesh. Sometimes the beast rises…”

♦ Each possesses the
Instinct
, an inner guiding force, like a voice whispering in one’s mind.

♦ Enemies of the Vampire Horde.

♦ Two warring factions, the Horde and the For-bearer Army.

♦ Each vampire seeks his
Bride
, his eternal wife, and walks as the living dead until he finds her.

♦ A Bride will render his body fully alive, giving him breath and making his heart beat, a process known as
blooding
.

♦
Tracing
is teleporting, the vampires’ means of travel. A vampire can only trace to destinations he’s previously been or to those he can see.

♦
The Fallen
are vampires who have killed by drinking a victim to death. Distinguished by their red eyes.