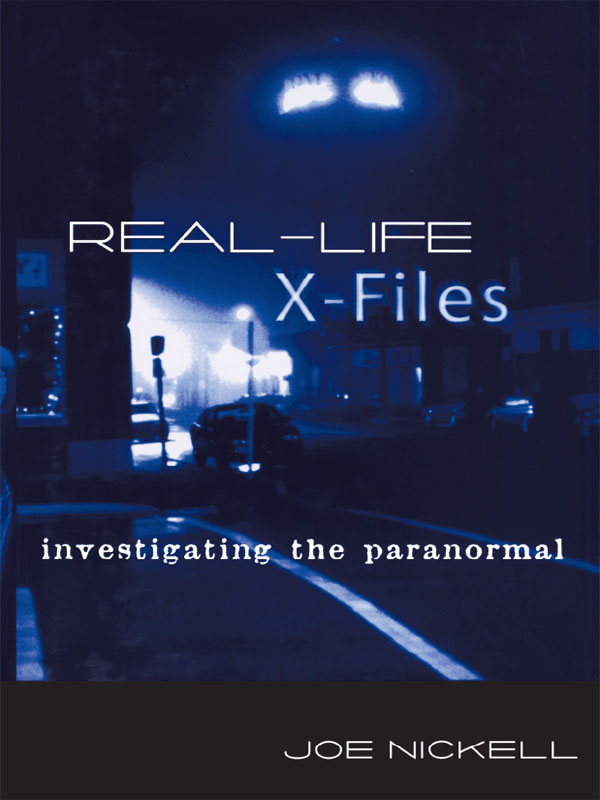 Publication of this volume was made possible in part
by a grant from the National Endowment for the Humanities.

This book is printed on acid–free recycled paper meeting
the requirements of the American National Standard
for Permanence in Paper for Printed Library Materials.

Manufactured in the United States of America.

1. The Case of the Petrified Girl

3. Magicians Among the Spirits

4. The Specter of Spontaneous Human Combustion

6. Legend of the “Miraculous Stairway”

8. A Study in Clairvoyance

10. Riddle of the Circles

11. Cult of the “UFO Missionaries”

22. Mystery of the Holy Shroud

32. Communicating with the Dead?

33. Jesus Among the Clouds

36. Adventure of the Weeping Icon

37. The Secrets of Oak Island

38. Enigma of the Crystal Tears

39. Death of the Fire-Breathing Woman

I am deeply indebted to Robert A. Baker, Emeritus Professor of Psychology, University of Kentucky, and John F. Fischer, forensic analyst (retired) at the Orange County, Florida, Sheriff’s Department crime laboratory, who have been invaluable over the years as fellow investigators, coauthors, and friends.

Strange mysteries—UFO and haunted-house reports, claims of spontaneous human combustion and weeping icons, and even more bizarre enigmas—continue to fascinate. We call them
paranormal
because they are beyond the normal range of nature and human experience. It is a broad term that includes not only the “supernatural” but also such reported anomalies as the Loch Ness monster and extraterrestrials, which—if they exist—could be quite natural creatures.

I have investigated such alleged phenomena for thirty years. I joke that I've been in more haunted houses than Casper and have even caught a few “ghosts.” I have gone undercover to attend table-tipping séances, obtained police warrants against a mediumistic purveyor of fake spirit pictures, exposed bogus “x-ray clairvoyants,” tested dowsers, interviewed UFO eyewitnesses and alien “abductees,” examined “weeping” icons, and much, much more.

Whenever possible, I have taken a hands-on approach in my investigations. I have visited relevant sites (like England's crop-circle fields and the shrine of Santiago in northern Spain), experimented to recreate phenomena (such as the liquefying blood of Saint Januarius and the giant Nazca ground drawings of Peru), challenged psychic and other claimants, and devised innovative strategies to investigate strange mysteries.

I have risked lawsuits and charges of trespass, inflicted “stigmata” on myself with a knife, flown in a hot-air balloon over a “monster”-inhabited lake, walked across a twenty-five-foot bed of fiery coals—even appeared twice on
The Jerry Springer Show
and lived to tell about it.

My interest in the paranormal grew with my involvement in magic,
a childhood interest rekindled in 1969 while I was employed as a young—and restless—advertising writer. I soon worked as a carnival pitchman, then began to perform professionally as a stage magician. Subsequently, to develop my investigative skills, I became an operative for a world- famous private detective agency, going undercover to investigate arson, grand theft, and other crimes. Still later, after stints as a blackjack dealer, museum exhibit designer, riverboat manager, newspaper stringer, armed guard, stuntman trainee and movie extra, among other roles, I returned to the University of Kentucky to teach technical writing and obtain a Ph.D. in English (with an emphasis on literary investigation and folklore). I studied hoaxes, frauds, and forgeries, as well as myths and mysteries of all types.

With my hands-on investigative approach, I sought to avoid the pitfall of so many who encounter paranormal claims as either “believers” or “debunkers”—that is, with their minds already made up. I decry both a credulous and a close-minded approach, holding that mysteries should neither be fostered nor dismissed but rather carefully investigated with a view toward solving them.

Investigation is predicated on a rational, scientific approach. Therefore, since proving a negative is difficult (often impossible), the burden of proof must fall on whomever advances a claim. In addition, the maxim that “extraordinary claims require extraordinary proof” must apply, meaning that evidence must be commensurate with the extent of a claim. The principle of “Occam's razor” also applies; it holds that the simplest tenable explanation—the one requiring the fewest assumptions—is to be preferred as most likely correct.

I have attempted to follow these principles in the studies and adventures that follow, representing some of my most interesting and challenging cases. They are taken from the pages of
Skeptical Inquirer
and
Skeptical Briefs
, the magazine and newsletter, respectively, of the Committee for the Scientific Investigation of Claims of the Paranormal (CSICOP). I became CSICOP's Senior Research Fellow in 1995 and soon launched an “Investigative Files” column, as well as producing other articles, reviews, and news analyses.

I hope readers will find them as engaging as I have. To be sure, the solving of a mystery can bring disappointment, but there is compensation in the knowledge gained, because—as I have discovered over the
years—learning the truth about the paranormal ultimately teaches us about ourselves.

Now turn the page: as Sherlock Holmes would say “The game is afoot!”