Siege of Praetar (Tales of a Dying Star Book 1) 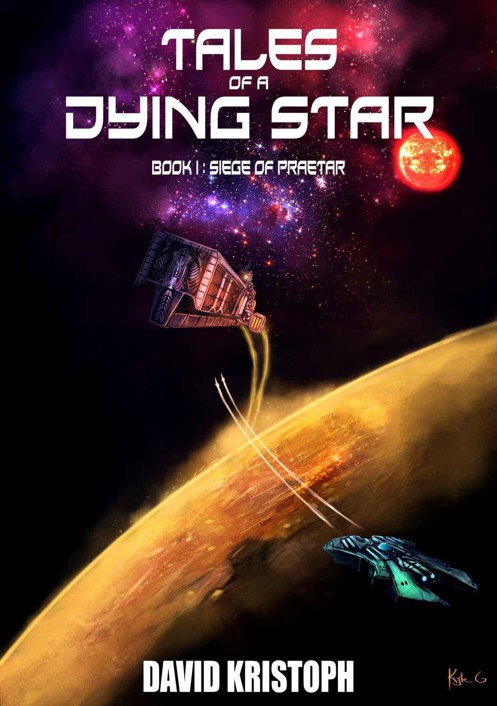 Part I: The Sentinel

Tales of a Dying Star

Book I: Siege of Praetar

All rights reserved. No part of this publication may be reproduced, distributed, or transmitted in any form without prior consent of the author.

Enjoyed this book? Please take the time to leave a review on Amazon.

To my grandfather Robert, for explaining the universe to me.

Part I: The Sentinel

Alarms flashed red in the cockpit. Hyken woke with a jerk.

A button clicked beneath his finger and the noise stopped, leaving only the blinking red light.
I was daydreaming
, he thought, not willing to admit to himself he slept in earnest. He’d been back on Melis with his children, playing in the meadow where the river bent and foamed.

He touched a button and a ship appeared on the glass monitor. Another tap and its details were listed: Ouranos-class freighter, scanned at 3,006 tonnes, leaving the planet’s atmosphere and beginning its turn. They were common here in the inner system, used for hauling goods or refined metals ready for industrial use. He could see it with his naked eye now, a tiny speck of light moving away from Praetar, the hazy yellow planet that filled most of the cockpit window.

That’s not right
, Hyken thought, recalling the facts and figures he’d memorized long ago. A quick glance at another screen confirmed it: the ship was underweight for its class by 70 tonnes. His fingers tapped at the screen and his view improved, zooming-in on the fast-moving craft. It was unremarkable, no paint or markings to set it apart from any other ship. He didn’t detect any concealed weapons, but the humans on Praetar were crafty in their engineering, and he knew the freighter was malicious. It certainly wasn’t hauling goods. He supposed it didn’t matter; his orders were clear regardless of the threat.

He pushed two buttons and flicked a switch. His ship shuddered from the launch. Two small missiles streaked away, visible in the window of the cockpit as they arced toward the freighter. It was over within seconds, the missiles finding their destination and puffing into a silent explosion in the distance. When the flames faded nothing remained but a thin cloud of smoke marring his view of the planet. The blinking light ceased, returning the cockpit to its former peace.

They never saw Hyken’s ship, a Sentinel-class fighter that was coated black and invisible to detection. He liked that just fine. The disc-shaped Sentinels were small and slow, good for striking first from the shadows but unable to flee or fight any legitimate threat. It had no other defenses. A freighter retrofitted with weapons of its own would have made quick work of him if the missiles had missed. Hyken tried not to think about that.

“What was that?” asked his copilot Alard, appearing in the doorway to the cockpit. He scratched the back of his neck and squinted at the screens. “The launch woke me.”

He was a young scruff, on his first tour and still barely a man.
No family of his own yet, poor kid
. He was competent at his post though, at least in the three days they’d been together. “Freighter up from Praetar. Moving fast, underweight. Probably hidden weapon systems on board.”

Alard leaned over and read the instruments. “Did you run a deeper scan?”

“Nope. We’ve our orders, no need to waste the energy. Unless you think otherwise.” Hyken let a bit of authority trickle into his voice.

Alard shrugged and sat in the second chair. “Did I miss anything else?”

“Nope, it’s been quiet,” Hyken replied. “You can go back to sleep; you’ve got another hour.”

“I’m awake now.” Alard pulled a small pouch from his uniform pocket, adjusting a nozzle at one end. He squeezed the bag into his mouth and the smell of coffee filled the room.

Hyken watched him out of the corner of his eye, but said nothing. It was always tough to gauge a rookie, and Alard was quieter than most. They sat there for a long while before Hyken could no longer bear the silence. “Don’t tell the siege commander,” he said, leaning over to confide in the other crewmember, “but I was daydreaming before the freighter appeared.”

Alard probably didn’t care, but was polite enough to feign interest. “Oh? What about?”

“I was back on Melis with my boys. They’re eight and three. Jon’s the eldest. He has my eyes, but Cairne’s got my personality. We were playing in a field near our home, throwing rocks in the river. The boys started throwing the rocks as far as they could, arguing over who had the stronger arm.”

“I had Cairne composed after my fourth tour, mind you. It was all legitimate; none of that business on the black market. As if the peacekeepers wouldn’t find out.”

His co-pilot said nothing, and it occurred to Hyken that maybe he was being rude.
Here I am blabbering about my biological riches when this one has none of his own
. So he said, “How many children do you want?”

His co-pilot shrugged. “I don’t know. It’s only my first tour.”

“I know, I know. I mean when all is done and finished, beyond your second. Surely you have an idea of how many you want.”

Alard took another long pull from his coffee and stared out the window before answering. “I may not do a second. Right now I just want to complete my time and become a civilian again.”

Hyken frowned, confused. “Is it the second tour you’re afraid of? Or do you not want children at all?”

“Either. Both. I don’t know, I’ve no heart for this work.” He realized what he’d said, and quickly added, “I’m happy to serve the Emperor, don’t get me wrong. But I would be content to return home for good after this. And children…” He furrowed his brow at the glass and said, “They’re a lot of work, a burden even. And I haven’t any women in mind.”

“You don’t need ‘em,” Hyken said cheerfully. “I’ve no wife, but I have my boys. The technicians just need a bit of your DNA, and you can pick the rest out from a database.”

He shrugged again. “Yeah, sure. I’ve just never felt that pull, that desire, you know?”

Hyken
didn’t
know. What was it all for, if not to reproduce, to bring life into existence? It saddened him to hear Alard dismiss it so easily.
The boy’s too young, he doesn’t know what he wants just yet
. That would change in time, as he matured and earned a greater appreciation for life.

“We all have an obligation to create life,” he said.

“There are plenty of people to do that,” Alard pointed out. “Planets full of them.”

“Sure, but that’s their
job
. Their intention isn’t pure. Life is something to be cherished and savored, not created in a factory.”

“What about your family?” Hyken asked. “The one you grew up with.”

“Do you have any siblings? Or a mother?”

“I have three sisters. I’m the only boy.”

Hyken gaped at him. “Four children? Your father completed eight tours, then?”

Alard nodded. “He’s on his tenth. He’s… a high-ranking officer, in the Exodus Fleet.”

Hyken whistled through his teeth and looked at the kid with new respect. He’d never heard of anyone completing ten tours, or at least surviving that long. Hyken’s own five tours seemed meager by comparison.

“You must be proud to be his son, to share such a man’s blood.”

“Sure,” he said, but there was no heart in his voice. Hyken arched an eyebrow at him, and Alard explained, “He’s a hero and all that. He was with the first force to capture Praetar thirty years ago,” he said, nodding out the window. “But I don’t know him very well beyond that.”

“I’ve only met him a handful of times. I’ve spent more time with you in this Sentinel in the past three days than in a lifetime with him.” Alard cocked his head at the pilot. “How often do you see your children?”

“Once every two years, in between tours,” he said. He didn’t like the accusation in Alard’s voice, so he jabbed a finger at him and said, “And you can believe they know their father.”

There was plenty of information on Hyken’s career in the computers for his boys to learn; he’d instructed their custodian to make them study every week. He sent them letters on their born-day, besides, which was more than most children could hope for.
I’m lucky to have such loyal boys
, he thought, scowling at his co-pilot. What kind of a son didn’t care enough to learn about his blood?

Alard put up his hands. “I’m sorry, I didn’t mean to insult. Are you happy with two? How many tours will you do?”

“As many as I can,” Hyken said cheerfully. “I was born for this sort of work. There’s no greater calling, no fuller pride, than defending the Empire.” When Alard said nothing, Hyken added, “You are proud to defend the empire, at least?”

“Sure,” Alard said, studying the information on one of the glass screens intently.

Hyken was unconvinced of his piety, but didn’t ask more. Instead, he said, “I’d compose enough children to fill a planet, if they let me. So I’ll do enough tours to make as many as I can, and be content with that.”

“Aren’t you scared? Afraid to die after so many tours?”

Hyken laughed in earnest. “Stars, no. And I’ll tell you why not.” He leaned close to Alard, as if to confide in him. “We’re all going to die, here or at home or in some faraway system. Our bodies will be burned away to ash, like so many flecks of light across the stars. But my eyes will live on through Jon, and my curled hair with Cairne, and my freckled skin with the both of them. Through my children, and their children, and their children’s children, I will live forever. Reproduction gives us a chance at immortality.”

He held Alard’s gaze a moment longer to let the words sink in. The co-pilot leaned back in his chair and stared off into nothing, considering. Finally he said, “That’s nice.”

The ship’s alarm screamed at them, bathing the cockpit in red light once again. They both whirled to their instruments, clicking buttons and swiping at the glass monitors. A ship jumped into view on the screen, another Ouranos-class freighter. Hyken looked up from his screen and gazed out the window, squinting in the distance until he saw it, a small point of light drifting away from the yellow planet.

The Day Lincoln Was Shot by Jim Bishop
Ebola K: A Terrorism Thriller: Book 2 by Bobby Adair
Gnosis by Wallace, Tom
Beyond the Veil of Tears by Rita Bradshaw
Rescued by the Navy Seal by Leslie North
A Druid of Her Own: An Immortal Highlander (Druid Series Book 4) by Mandy M. Roth
Soldier Stepbrother by Brother, Stephanie
Almost True by Keren David
Confessions of a Chalet Girl: by Lorraine Wilson
How to Measure a Cow by Margaret Forster