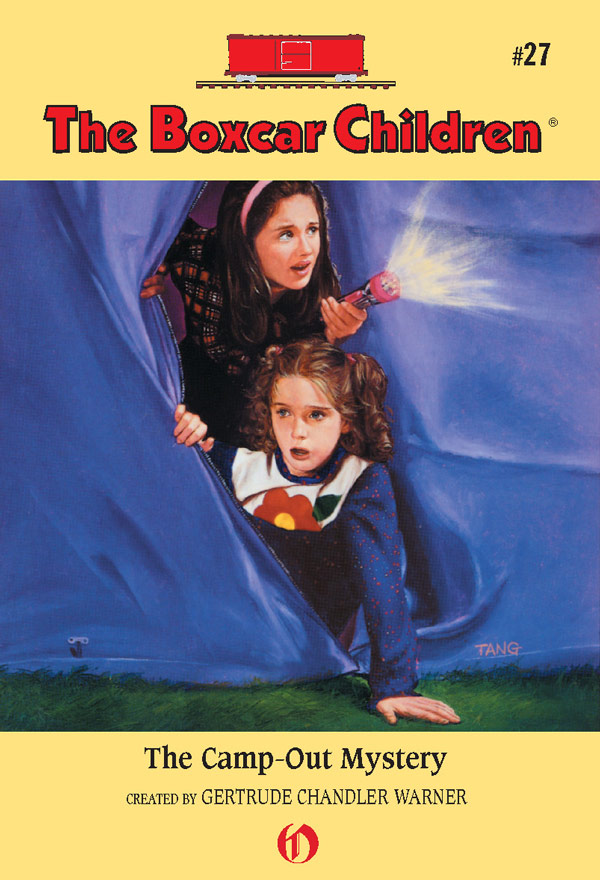 “D
o we have everything?” Grandfather Alden asked.

The four Alden children looked inside the station wagon. They had gotten up before dawn to pack for their camping trip. Five backpacks, one for Grandfather and one for each of the children, lay side by side. Each contained a sleeping bag, extra clothes, and a flashlight. Next to the bags were two folded tents and a cooler.

Their dog, Watch, stood on his hind legs and put his front paws on the tailgate so he could see, too. Everyone laughed.

The dog's food and dishes were packed in his own special backpack. Jessie had made it for him out of an old piece of canvas.

Jessie lifted the top of the cooler. An old frying pan, stew pot, tablecloths, and dishes were packed inside.

“Is my cup in there?” Benny asked. It was right on top. No matter where he went, he always took his cracked pink cup. It was special to him. He had found it in the dump back when the children lived in the boxcar.

Violet checked her list. “What about the lantern?” she asked.

“I packed it,” fourteen-year-old Henry said. “Extra batteries, too.”

“Do we need a camping stove, Grandfather?” Jessie asked.

“No,” Grandfather answered. “The camp provides places to make fires for cooking.”

“If they didn't, we could build one,”Benny said. He was six years old and a good helper.

“I guess that's everything,” Violet said.

Watch jumped into the wagon, turned around three times, and curled up on top of a tent.

Grandfather closed the station wagon's back door. “Well, then, we're on our way.”

Henry and Violet climbed into the backseat. Jessie sat in the front and opened the map. Grandfather had marked the route for her.

Jessie glanced behind her. The picnic basket was not there. “And the trail mix,” she said. “We forgot the trail mix.” Benny and Violet had made the blend of nuts and dried fruit the day before.

Benny started running toward the house “I'll get it,” he said.

Just then, Mrs. McGregor came toward them. She carried the basket and two paper bags. “We almost forgot the most important thing,” Benny said.

Mrs. McGregor laughed. “I couldn't let you do that.” She handed Benny the bags.

“Your favorite cookiesâjust out of the oven,” Mrs. McGregor explained. She handed the picnic basket through the window to Henry.

Benny climbed in beside Violet.

Grandfather started the car. “I don't know what we'd do without you, Mrs. McGregor,” he said.

Mrs. McGregor stepped back. “Have a good time,” she said and waved.

The children waved to her. “See you next week,” they all called.

Outside Silver City, they picked up speed. Watch nudged Benny over a bit and put his nose out the window.

Benny laughed. “Watch wants to see where we're going, too,” he said.

“There's another reason a dog hangs its head out a car window,” Violet said. She liked animals and was always reading about them. “A dog gets nervous in a moving car. When he's nervous, he sweats. But he doesn't sweat like we do; he salivates.”

Benny was just about to ask what
salivate
meant when Violet explained.

“He gets lots of saliva in his mouth and thenâ”

Violet nodded. “But with his head out the window, he gets better air circulation,” she said. “He cools off, stops sweating, and feels better.”

Benny liked his explanation better. Why wouldn't Watch want to see where he was going? It was fun to see the landscape change. In just a few miles, everything looked different. The houses got further and further apart. Instead of busy towns, small quiet farms dotted the hillsides.

After a while, Benny stopped singing. “I'm hungry,” he said. “Can we stop somewhere and have our picnic?”

The others agreed that might be a good idea. They were all getting hungry.

“There used to be a nice roadside picnic area along here somewhere,” Mr. Alden said.

“It must be,” Mr. Alden said as they approached the small picnic grove. He pulled off the road and parked the car. Everyone piled out. Watch ran around sniffing the ground.

The place was a mess. Empty cans and paper lay all around.

Mr. Alden shook his head. “It doesn't look like the same place,” he said. “It was always so clean.”

“Let's clean it up,” Henry said. He began picking up cans and throwing them into the garbage can. Violet and Mr. Alden helped. Watch thought it was a game. He began bringing cans to them.

Benny found a small branch which he used like a broom to sweep off a picnic table. “That's the best I can do,” he said.

“It's clean enough,” Jessie said. “We have a tablecloth.” She opened the picnic basket. Inside was the blue cloth Henry had bought when they lived in the boxcar.

Jessie spread the cloth over the table and laid out paper plates and cups. She placed a wrapped sandwich on each plate: peanut butter for Benny and Grandfather Alden; tuna for Henry and Violet; cheese for herself. Violet gave each some potato chips and an apple. Henry poured milk from the thermos into paper cups.

They all sat down on the picnic benches and began eating their lunches.

“I think you'll like the campgrounds,” Mr. Alden said. “I certainly enjoyed camping there when I was your age.”

“Did you camp there often?” Henry asked.

“Do you suppose it'll be crowded?” Violet asked.

Mr. Alden shrugged. “Might be. This
is
spring vacation.”

Back in the car, Jessie studied the map. “I think we turn up ahead,” she directed.

At the corner, four large trees grew side by side. A road sign stood across from them. It read:
County B.
Mr. Alden made a smooth turn onto the unpaved road.

The children bounced as the car hit a hole in the road. They drove along the curving road for several miles. Finally, they saw a big wooden sign.

A
grocery store stood near the entrance to the forest preserve.

“There's no store inside the park,” Mr. Alden said. “We'll do our shopping here.”

His tail wagging, Watch followed them to the door.

Jessie put out her hand. “Stay,” she said.

Watch cocked his head. He seemed to be saying, “I'll wait, but I don't like it.”

The woman behind the counter greeted them. “Welcome,” she said.

The woman looked puzzled. “Yes, I'm Doris, but I don'tâ”

The woman smiled and shook his hand. “James! How nice to see you.”

“These are my grandchildren,” he said proudly. “This is Henry James. He's the oldest. He's in charge of food for the trip.”

Henry smiled and held up his shopping list. “Grandfather told us we could get everything we needed here.”

“Then there's Jessie,” Grandfather continued. “She's twelve and in charge of the map for our camping trip.”

“Violet is our musician,” Grandfather said. “She's only ten, but you should hear her play the violin.”

“It's always good to have a little music in the woods,” Doris said.

“And I'm Benny,” the littlest Alden said. “I'm six. I help with everything.”

“So, Doris, are the campgrounds crowded?” Mr. Alden asked.

“No. Things have been slow lately,” Doris said. “Camping isn't what it used to be.”

“How's your sister?” Mr. Alden asked. “Hildyâwas that her name?”

“I remember the two of youâ”

“I'd rather not talk about Hildy,” Doris interrupted.

Ignoring that, Doris came around the counter. “Let's see that shopping list,” she said to Henry. “You probably want to get a move on.”

They piled the groceries on the counter: bread, peanut butter, jam, milk, eggs
,
pancake mix, syrup, crackers, cheese, hot dogs, cooked chicken, fresh vegetables, and fruit â all the things they would need for a few days in the woods.

“The marshmallows,” Benny reminded them.

“And the graham crackers and chocolate bars,” Violet added.

“The ice machine is outside,” Doris said.

Henry ran to get a bag. He brought it and the cooler back into the store.

They unpacked the cooler and put in the ice and the perishable items. The remaining groceries, along with the dishes and cooking things, went into two boxes.

Doris followed them to the door. “I hope nothing â¦ spoils the trip for you,” she said.

“I'm sure we'll have a wonderful time,” Mr. Alden said as he put the boxes into the wagon.

Driving away, they waved to Doris, who was still standing in the doorway.

“What did she mean she hoped nothing would spoil our trip?” Henry asked.

“And not wanting to talk about her sisterâ that was strange,” Jessie said.

“She was so friendly at first,” Violet put in. “And then, suddenly â¦”

Mr. Alden nodded. “She did act strangely. Not at all the way I remember her.”