The Christmas Cantata (The Liturgical Mysteries) 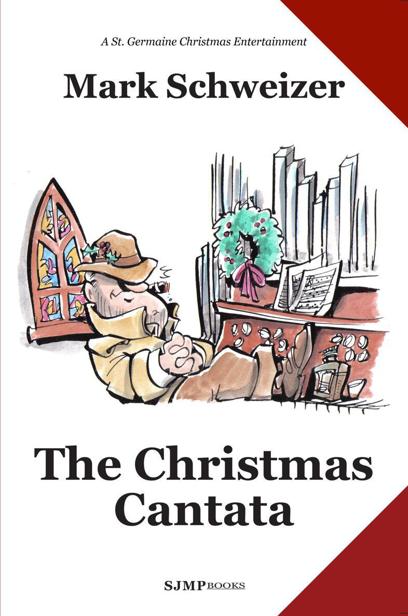 All rights reserved. No part of this publication may be reproduced, stored in a retrieval system or transmitted in any form or by any means electronic, mechanical, photocopying, recording or otherwise, without the prior written permission of the publisher.

She had just returned from Paris. It had been a grueling journey, although the sea voyage hadn't been too bad, taking a little over a week to make the crossing from Le Havre to New York. Her father had booked her passage on the S.S. Normandie, the flagship of the French line Compagnie Générale Transatlantique. Only two years old, the ship was a marvel, the most powerful steam turboelectric powered vessel ever built. Even so, she had found the passage trying. Following her arrival in New York, she'd boarded a train, then another, then yet another, before disembarking in Asheville for the car trip home.

The young woman had departed for Europe two years earlier on the Graf Zeppelin, a luxury afforded to her by her father after her graduation from Asheville Normal and Teacher's College, but to return on a zeppelin was out of the question. Not after what happened to the Hindenburg the previous May.

The old railroad man required that his daughter get a teaching degree. Study in music was not an option. She had swallowed her disappointment and struck a deal with her father. She'd get her teaching certificate, but then be allowed to travel in Europe for two years after its completion. She promised her parents that she would visit many countries and that it would broaden her horizons. It wasn't an odd request for the time. Many young people headed to Europe and other exotic venues in the gap between education and settling into adulthood.

She was never in want of money during her excursion. The family was well off, Father having been employed his entire career by the Vanderbilts, and he didn't hold onto the purse strings too tightly where his little girl was concerned. He would be eulogized many years later as a doting father and husband, a good businessman, and someone who put his daughter's welfare above all else. This was the truth. Why else would he have insisted on the best piano teachers in western North Carolina from the time she was six years old? Why else would he have made sure she spoke French, German, and a little Italian? Why else would he have put his foot down and guided her away from music and toward the teaching profession when it became clear that she wanted to have a career? Better a teacher than a secretary, or worse, an itinerant musician, he said.

She was as good as her word and did, in fact, travel across the continent of Europe for the first two months, visiting many countries. Then, feeling the need for a home-base, she'd settled in Paris and, on a whim, applied for a job playing piano for a few evenings a week at Maison Prunier on Avenue Victor Hugo. Although jazz was all the rage, the owner of the restaurant was an aficionado of Mozart, and she knew all but one of the boy genius' eighteen piano sonatas from memory. It was on one of those evenings that she met Nadia Boulanger.

It was actually a woman named Annette Dieudonné who approached the piano after the girl played the final chords of one of her favorites: Number 18, the one in D major. Mozart's last.

"You play beautifully," Annette said in perfect English. "We understand from our waiter that you are an American. My friend would like to meet you. Nadia Boulanger? Perhaps you know of her? Would you care to join us?"

The young woman's heart skipped a beat. Of course she had heard of Nadia Boulanger, student of Fauré and Widor, friend of Stravinsky and Dukas, teacher of Aaron Copland, Roy Harris, Virgil Thomson, and a host of others. Of course she would like to join them. Of course, of course!

She spent the next half hour answering questions. What was her name? (She answered "Elle" even though it was not. Her own name, she suddenly decided, was too pedestrian, too American.) How did you come to be in Paris? Where are you staying? With whom have you studied? Gerard Aguillon? Gerard is one of my dearest friends! In North Carolina, you say? Composition as well as piano? I knew he was in America, but Asheville of all places. I thought I recognized the phrasing in the Adagio! Oh, don't take offense, my dear! It takes years to find your voice and you are still a baby. Did you know that Elle is my cousin's name? You simply must come to supper!

The next twenty-two months were spent in blissful study: traditional harmony, score reading at the piano, species counterpoint, analysis, and finally, composition. "You need an established language," Mademoiselle Boulanger told her. "Then, within that established language, you will discover the liberty to be yourself. It is always necessary to be yourself – that is a mark of genius."

She didn't tell her father what she was doing, but she secretly wrote and told her mother everything.

St
.
Germaine, North Carolina, was in a crabby mood. Yes, the whole town. If a temperament could affect an entire populace, "crabby" was what St. Germaine was. Noylene's new personal astrologer, a woman named Goldi Fawn Birtwhistle, blamed it on the convergence of Pluto and the third moon of Jupiter.

Goldi Fawn was a hair professional and the latest to join the cast at the Beautifery, Noylene Fabergé-Dupont-McTavish's Oasis of Beauty. Goldi Fawn was a woman of generous proportions with an unknown complexion for whom the word "pancake" obviously had multiple and disparate connotations. She would freely admit that she wasn't as adept with make-up as she was with hair, but, as she liked to point out to her customers, her own hair was her "crowning glory." The color was Medium Champagne Blonde No. 3 and it sat piled high on her head with untamed wisps dangling down in what Goldi Fawn described as her come-hither "Delilah" look.

"First Corinthians 11:15," she'd say to whoever was sitting in her chair. "A woman's hair is her crowning glory and I oughta know. I had my own hair studio in Johnson City. You're from Johnson City? Well, you know that liquor store by the railroad tracks next to the Righteous Arm of God Pentecostal Holiness Church of the Redeemer? You do? Well, right behind that liquor store was where I had my studio. It was called Crowning Glory Hairstyles. That's right! I don't mind advertising my faith wherever I can. Lookee here. I've even got a Jesus Fish on my hair dryer..."

Goldi Fawn saw no problem in combining the Christian faith and astrology. "God made the stars, and it's my spiritual gift to understand what they have to say to us."

The resulting exchange was inevitable. "Astrology is of the devil," Darla would say. Darla was one chair over and another of the licensed Women of Beauty whose mission was to offer glamour and allurement to the needy females of St. Germaine.

"There will be signs in the sun, moon, and stars," Goldi Fawn would reply, using one of the many scripture references at her disposal thanks to her penchant for writing them on slips of paper with various colored markers and thumb-tacking them to the wall around her station. "Just lookit," she'd say, pointing to one of her Bible verses. "It's right there in Luke 21:25. And I won't even mention the fact that the wise men from the east, the ones looking for the baby Jesus were..." she paused for effect..."yes, I believe I'm correct in saying this...
astrologers
." She'd give a self-satisfied smile while she smeared some color onto a piece of tinfoil. "Or are you going to tell me I am mistaken? I can show you several scholastic references if you're interested. And I have many other scriptures you might like to consider."

"I'll give you a scripture," Darla would mutter under her breath, all the while eyeing her sharpest pair of scissors resting on the counter. "Thou shalt not suffer a witch to live."

According to Goldi Fawn, the aforementioned heavenly convergence was responsible for the attitude of the entire town, and that attitude—make no mistake—was "crabby." Pete Moss, owner of the Slab Café, thought that the crabbiness might have something to do with the increased bombardment of positive ions from outer space; these ions funneled directly toward St. Germaine. Also included in Pete's theory were sunspots, an ever-widening hole in the ozone layer, the federal deficit, armadillo migration, and the cancellation of two long-running soap operas. "My God...Erica," he'd say, close to tears, his face buried in his hands. "What will I do without Erica?"

Usually, in St. Germaine, the three weeks before Christmas were marked by an increase in good feelings toward one's fellow man.

St. Germaine is our small village situated in the Appalachian Mountains in northwest North Carolina. There is a downtown square that gives structure to the town's layout and in the center of the square is Sterling Park; a couple of acres of grass; seasonal flowers beds; large maple, poplar, and chestnut trees; a white gazebo; and a statue of Harrison Sterling, the mayor who, in 1961, talked the city council into retaining all of the downtown edifices by way of levying hefty fines on those owners intent on embracing the then-current trend of slapping aluminum siding on everything, or, even worse, tearing it down and replacing it with "modern architecture." Since it was financially disastrous for the merchants to tear down their stores or cover them up, they restored them instead. The result was a mixture of quaint and beautiful buildings surrounding the park.

The largest building on the square, the nineteenth-century courthouse, anchored the structures on the east side. The police station stood adjacent, and shops and eating establishments were nestled side by side around the square like a full-sized Dickensian village. The next largest (and the newest) building was St. Barnabas Episcopal Church which looked almost directly across the park at the courthouse. Although the church was only a few years old, the architect and the builders had replicated the facade of the old church, the one lost in a terrible fire, down to the last detail, even going so far as to source the stone from the same quarry as the original structure. Besides the church, the St. Germaine Downtown Association membership included the Slab Café, Schrecker's Jewelry, the Bear and Brew, a flower boutique, the Ginger Cat, Eden Books, the Appalachian Music Shoppe, the library, Holy Grounds (our Christian Coffee emporium), Noylene's Beautifery, several lawyers' offices, and a handful of antique and mountain-crafty stores.

Finding the Dream (For the Love of Music #1.5) by Mia Josephs
Switch by William Bayer
Vlad by Carlos Fuentes
A Question of Marriage by Temari James
Ex-Purgatory: A Novel by Clines, Peter
The Other Wind by Ursula K. Le Guin
The Duke's Downfall by Lynn Michaels
Voyage of the Owl by Belinda Murrell
Soarers Choice by L. E. Modesitt
Far Called Trilogy 01 - In Dark Service by Stephen Hunt