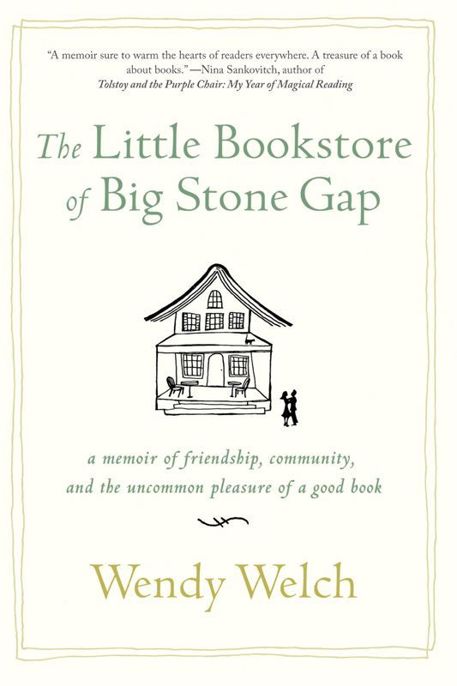 The author and publisher have provided this e-book to you for your personal use only. You may not make this e-book publicly available in any way.
Copyright infringement is against the law. If you believe the copyright, please notify the publisher at:
us.macmillanusa.com/piracy
.

If you have ever walked away from doing something “important” to do something better, this book is dedicated to you.

It’s also dedicated to everyone who loves books.

This is a true story. I’ve changed some names and identifying details, created composites, and altered a few elements of the timeline to make events easier to understand. I hope the people who find themselves described here enjoy reliving the moments, and I hope the rest of you enjoy reading about all the silly things we did.

1
How to Be Attacked by Your Heart’s Desire

2
No Longer Renting the Space Inside My Skin

3
Mommy, Where Do Books Come From?

6
Creating, and Being Created by, Community

7
God Bless You for Trying, Losers

9
Catty Behavior, or How Beulah Taught Us to Stand Tall, Quit Whining, and Have Fun

10
Saved by the Cell (and the Napkin Dispensers, and the Corkboards)

11
A Book’s Value Versus Its Price

12
I Dream About Running a Bookstore Someday …

19
Living Large in a Small-Town Bookstore

22
The Way We Buy Now (with Apologies to Trollope)

23
Booking Down the Road Trip

When you sell a person a book you don’t just sell twelve ounces of paper and ink and glue—you sell a whole new life. Love and friendship and humor and ships at sea by night—there’s all heaven and earth in a book, a real book.

Where the race of men go by—

As good and as bad as I.

I would not sit in the scorner’s seat

Nor hurl the cynic’s ban—

And be a friend to man.

—Sam Foss, “The House by the Side of the Road,” from
Dreams in Homespun

T
HREE AM
.
SLEEP WAS GONE
. My mind whirled with boxes to unpack, items to find.

Sliding from under the cat curled on my chest—she opened one eye and indicated displeasure—I crept toward the stairs. From behind came a soft
whump
as our Labrador gained the mattress, made peace with the cat, and claimed the sleep that eluded me.

Downstairs, an electric kettle sat next to the tea chest on an otherwise empty counter, testament to my Scottish husband’s priorities. I made a mug of raspberry tea and wandered into the large front room. The cavernous house, walls lined with empty bookshelves, stretched into dark nothingness, waiting. In the middle of the room my laptop rested on an old mission table, the only other furniture. Both looked dwarfed and out of place.

I could relate. Since arriving in Big Stone Gap, Virginia, Jack and I had been living as gracefully as fish astride mopeds. On something dangerously close to a whim, we became the broke and terrified owners of a five-bedroom, three-bath-with-one-working Edwardian mansion, complete with squeaky hardwood floors and a leaking roof. Under the influence of salsa and sangria, we’d decided to turn this house into a used book store, or die trying.

Probably the latter,
I thought, watching the Internet fire up against the blue-gray darkness.
What are we doing here, anyway? This is the kind of town you see in true crime documentaries, where the bodies are never found because the locals don’t tell.

Jack had just yesterday erected a gigantic sign in four-hundred-point type, announcing
USED BOOK STORE OPENING SOON
. That pretty much cemented our status as “those new weirdos in the old Meade house.” Passersby who stopped to read the sign made encouraging comments along the lines of, “A bookstore? You’re nuts!”

For which were we nuts, I wanted to ask: For pretending we’d never heard of iPads, e-books, and Kindles? For thinking a town coping with its own dying coal industry would support a new business? Believing the downturned economy would swing upward soon? Hoping that the old guard in a notoriously insular region might welcome new kids onto the block? Or, our worst nightmare, for all of the above?

Headlights swung in a wide arc outside, startling me from doom-laden reverie. A siren emitted a single
whoop
amid a sudden blue flash.
Must be pulling over a drunk driver,
I thought. Our would-be bookstore sat along the top of a T-intersection. A police SUV hovered in its junction as a spotlight lit the front room. Curtainless floor-to-ceiling windows left us naked to outside eyes, but why were the police investigating at three in the morning?

The Bronco drove around the corner and tried to enter a grass driveway at the side yard. The chain-link fence—a priority because of our born-to-ramble dogs—had gone up as soon as we moved in, closing off that drive. Now the SUV stopped inches from the mesh; if a vehicle could look frustrated, this one did. It turned and chugged back around the corner, pulling up at our curb. The driver’s door opened. Running a hand over my tangled mass of red hair, I belted Jack’s bathrobe tighter and opened the front door.

Or tried to. It was original to this 1903 monstrosity we now owned, so I managed to turn the brass lock, but the warped wooden frame stuck. A keyhole sat below the knob, looking smug. Was the door locked? Where was that key? Had we found it yet? I tugged again. Nothing.

A short, squat shadow came striding up the stairs.
This is how people get shot!
I thought, envisioning the officer’s view from the other side—a dark body mass struggling with an object just out of sight. I waved in an “I come in peace” sort of way.

The policeman put a hand to his holster.

“Hang on!” I called through the glass. “The door won’t open!” I gave a mighty tug and the knob fell into my hand as the door flew wide, throwing me off balance; raspberry tea sloshed onto the floor and the bathrobe belt slackened. Slipping the doorknob into a pocket, tightening my grip on the mug, and tossing hair from my eyes, I stepped barefoot onto the porch to say, “Good morning, Officer.”

His eyes swept over hair, robe, mug, feet. “Do you live here?”

No, I’m a burglar; the tea is for cover.
Tempting though it was, commonsense pistons fired in time, and instead I replied, “Yes, sir.”

“Mmm.” He pushed his gun, hovering an alarming two inches from its holster, back into place.

“My husband and I just bought this house.”

“A bookstore? You’re nuts!” He slapped his thigh in gleeful emphasis.

“So I believe. Were you pulling someone over for drunk driving?”
Why are we having this conversation in the middle of the night?

The officer stared as if I truly were insane. “What? This is an official safety check. I figured burglars since I saw movement and light.”

And they put up signs and erected a chain-link fence?
Aloud I replied, “Nope, just harmless little Jack and Wendy. I had insomnia and came down to use the computer. But I saw you in the intersection when your siren … um, blipped.”

The officer averted his gaze, rocking on the balls of his feet. “Oh. Yeah. I hit the wrong button.”

Okay, that was endearing, so we stood on the porch and talked into the dark. Grundy, as he introduced himself, planned to retire in six months. His brother, a successful surgeon, owned a place in the Florida Keys, a palatial home of seven bedrooms, cathedral ceilings, and a sauna, to which Grundy had yet to be invited. Grundy attended church every Sunday, was a member of the Kiwanis club, voted in all civic elections, but it was his brother who had millions, and if you asked Grundy it was down to insurance fraud.

“Ain’t that the way of it?” my new friend lamented. “Me in public service, him getting rich.”

Grundy knew the elderly women who’d shared the house before us. “Looked in on ’em from time to time,” he said, eyebrows wiggling in a way it seemed wise not to explore. After the former owner went to a nursing home, her friend had been evicted without ceremony. “Got the lawyer’s letter at noon, she was out on the street by four.”

I emitted a sympathetic noise.

“Don’t feel sorry for
her
. Con artist of the first water. Probably owes money to everybody from here to the state line.”

“Since they left, I usually drive up in the yard, check the house, make sure everything’s all right. Couldn’t do that tonight. Fence in the way.” He squinted at me in an accusing manner.

“We have a black Lab, Zora. She’s a good watchdog.”
Asleep, upstairs.
“And Bert, our terrier, is a total yipster. Barks at everything.”
Also sound asleep.

He nodded, apparently relieved that his duties had passed to qualified personnel.

By the time Grundy shook my hand farewell, dawn had slipped its early promises into the sky. He started for the steps, then looked back. “Y’know, it’s great y’all are putting in a bookstore. Not a lot to do around here. I’ll come see you after I retire. I like Westerns.”

It felt good, that tossed-off tacit approval. Like being given the key to the city. Town. Village. Front door.

As I turned toward the house, a brief
whoop
sounded and a blue flash lit the intersection. Grundy rolled down his window. “Gol durn it!” he called with a smiling shrug, then lifted his hat in salute and drove into the sunrise.

The front door wouldn’t lock, but so what? Grundy watched over us as we slept.

Upstairs, my husband opened one dozy eye and watched me trick our Labrador off the mattress with the doorknob. “Is that from the front door?” Jack asked as Zora, realizing she’d been had, dropped the brass ball with a sarcastic clunk and padded into the hallway, followed by a sleepy Bert.

“We now know someone in this town.” I gave him a brief rundown of meeting Grundy.

Jack shook his head, eyes closed. “We’re going to fit right in here,” he said, and pushed his face into the pillow.

Dear Lord, I hope so,
I prayed silently into the graying light.