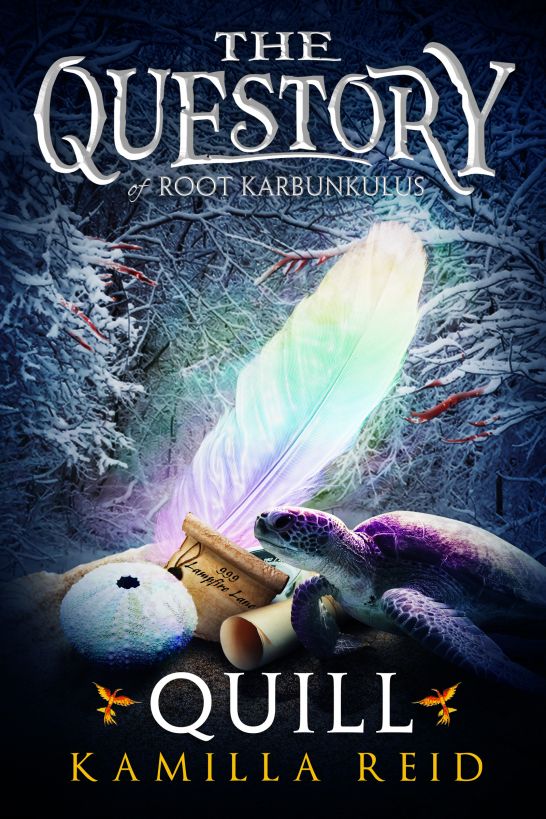 All Rights Reserved. No part of this book may be
reproduced in any form or by any electronic or mechanical means,
including information storage and retrieval systems without
permission in writing from the author, except by a reviewer who may
quote brief passages in a review.

This ebook is licensed for your personal enjoyment
only. This ebook may not be re-sold or given away to other people.
If you would like to share this book with another person, please
purchase an additional copy for each recipient. If you’re reading
this book and did not purchase it, or it was not purchased for your
use only, then please return to
Smashwords.com
and
purchase your own copy. Thank you for respecting the hard work of
this author.

“It was fantastic! I’ve been reading Root Karbunkulus
sooooooo much it seems like I read it every day!”

"I rarely find a book that I enjoy that has enough
fantasy in it but yours does!"

“Your book is so addictive! I’ve read it three times
now!”

“A gorgeous and magical world! I look forward to
recommending it to my students!”

“Had me on the edge of my seat the whole time!”

“A great book! It was awesome! You are so
creative!”

“I read A LOT of books and often get bored but I
could hardly put yours down!”

To Lori and Nina

7 THE MAVEN OF MYSTIC BEINGS

Krism wiped the blood from his nose. It was
spilling into his mouth and the taste was making him feel sick. He
looked around for a familiar face among the fifty or so kids that
had gathered to watch the fight. How’d they get here so fast? Had
they known he was going to be ambushed by these boys?

Certainly Krism had been used to this sort of
thing. Growing up in service to the Murk Lord was not without its
fair share of beatings. But wasn’t that supposed to be all behind
him now? Apparently not. He swerved around to face his attackers.
Though there were four of them and they had caught him by surprise,
he was still standing. His time at Hotel Gub had served him well.
His strength was coming back. His skin was thicker.

Peripherally, he could see a shuffling
exchange of money through the crowd. Bets were being placed, odds
obviously against him. And now that cute blond girl in pink had
arrived and pushed her way to the front. Krism smiled. She was as
golden as the sun he’d longed for his whole life. Even more so.

“What’s so funny, Tint?” One of the boys
pushed him.

Krism swung his fist. And missed. The crowd
laughed and jeered. Some hissed. Some even spit. What was it about
this that hurt so much? How could this be worse than his suffering
under the Murklord?

“Filthy Tint!” called someone from the sides.
Krism turned his head and - Bam! - a fist had caught his ear and
clanged its hatred down the canal. Cheers sprang from the crowd.
But what these kids didn’t know was that a volcano of rage had been
gurgling and spitting and holding back long, long before. Krism
could feel its acid inside his stomach.

Krism was grabbed by his shoulders and pulled
away. His knuckles were raw. He had been pounding a boy with his
fists over and over without even knowing it.

“Enough!” The words brought Krism swimming
back and looking into the dark, hot eyes of a boy. A boy with a
crude scar on his forehead.

The mark of the Murk Lord.

The boy helped Krism to his feet where the
growling horde of spectators was being held back by a band of
rivals. Tints. At least twenty of them, armed and lethal. They
stood between Krism and the crowd. He could see, in this silent
hold the invisible lines of hate.

One of the fighting boys scrambled up with a
bloodied nose and was caught by his friends. “Pigs!” he spat at the
new arrivals.

Krism could feel the tautness of the air. In
front of him, his brothers and sisters, leftovers of the Murk Lord
stood against the mob, poised to fight. For him.

The dark-eyed boy let go of Krism’s
shoulders. He turned to him again. He was tall and angry. He and
all his gang wore strips of grey, like limp, leather shadows. And
on all of their foreheads the crude remnants of a broken circle
scarred them inside and out.

“You shouldn’t be there, in that castle. You
should be with your kind,” the boy said to Krism.

“Yeah, y’ugly, black Tint!” a girl on the
other side of the invisible line spewed. A grey leather elbow
checked her.

Krism wiped the back of his hand over the
warm blood on his lip. His tongue could taste its iron. His eyes
wandered back to the scene and scanned for answers. Maybe this boy
was right, this brother. Maybe Krism shouldn’t be here where he
clearly didn’t belong. Where he was despised.

In the sea of faces, he spied the blond girl.
Her eyes were wide and dark, locked on him again. She was flanked
by two sneering friends but nothing came from her. Root had warned
him about her. She’d told him to stay away, that this girl was
trouble, that she hated Tints. But her eyes…they were so
beautiful.

Krism pulled away from the gang leader. He
walked slowly and purposefully until he stood right in front of
Hilly. Hilly straightened and he could see her try to catch her
breath. His own breath was fast and hard. He said nothing.

In the next instant he was kissing her and
nothing else existed.

Hyvis Punyun had seen the crowd from a
distance and never being one to miss a beat of gossip she
approached with her authority clearly in tact.

She would never in her life forget what she
saw.

She screamed. A pitch fully loaded with rage,
hatred and fear.

Krism turned. The woman was already almost
upon him. Her eyes shone of venom. “You monster. You will step away
from her or so help me…”

“Hilly, baby doll. Are you okay?” Hyvis
wrapped herself around her daughter. As Hilly buried her face into
her mother’s folds Hyvis’ eyes landed on Krism and narrowed
viciously. “You will pay for this…back away…now…all of you!” She
threw all her weight upon the crowd. As she maneuvered her daughter
away she paused at the leader of the dark gang. “I swear…this is
not over.”

There is nothing…no thing…in the entire
universe worse than the smell of a wet Hovermutt freshly rolled in
Bulk poo.

“Hold still, Stogie!” Root yanked her shaggy
companion closer to the spouting mouth of warm water. But Stogie
was much, much bigger than her and according to Stogie there was
nothing worse than a bath.

“Aw, c’mon, Stogie! You stink! You are not
going on the Quest tomorrow smelling like this!”

Even as she said it, Root could hardly
believe it. Finally, after twelve long weeks resting and
recuperating at Hotel Gub she and her teammates would be seeking
DréAmm’s next mysterious artifact. And tonight at the Gala she
would finally get to find out what that mysterious artifact
was.

“Why happy days to you, Miss Root
Karbunkulus!” Elgart appeared from around a corner.

Root smiled. Elgart was always covered in
chalky dust, which made sense because he was always fixing up the
House of Gub. Root wondered how it was that he remained cheerful
when, despite his best efforts, it seemed the castle was getting
worse.

As owner of the castle, Master Hillywur Gub
had promised to renovate it to the height of its glory days but
with every triumph there were twenty setbacks. Sinks sunk.
Furniture got webbed into walls. Ceilings fell in. Floors bubbled
up. Nothing of his and Elgart’s attempts seemed to last long at
all. It didn’t help that good employees were of extremely short
supply, especially ones that could tolerate the Krux. It seemed its
dark history surrounding the murder of King Validyn would cast its
cold shadow forever.

On the cheery side of this, at least for
Root, she had become quite adept at escaping the Krux’s cold spots.
In fact, most of the Quest kids had managed to avoid them pretty
well now. All but Milden Ibbbs who had been seen stuck in walls,
with an eye peering from his belly button, puking up toe jam, hair
coming out of his mouth and wearing his feet backwards. All the
unpleasant results of walking into a Krux cold spot.

After Milden’s last Krux encounter, when he
was found hanging upside down from the drapes, his father Milwart
Ibbbs took him to the Medician. This is when tongues wagged and the
news ripped through the castle like wind. Poor Milden Ibbbs was, of
all things, allergic to magic. That was why he couldn’t notice the
cold spots. It was a tragedy Root was sure she’d’ve not recovered
from and yet somehow Milden still managed to stay jovial. He was
still determined to stay in the race and not a day would go by
without an inspirational smile and an ‘Aren’t we so lucky!” from
Milden Ibbbs.

There was only one person as happy as Milden.
Root had been waiting to see him all morning and now jumped at her
chance.

Root tried to keep the corners of her mouth
up.

Well, duh! Only her whole life, she wanted to
yell. Not at Elgart. At DréAmm council. Stupid, dumb DréAmm
council. Seriously, how hard was it to find out who her parents
were? Apparently, very hard. At least according to the Guardian
Studaben Picklepug who had a really irritating habit of patting
Root on the head while explaining the stacks of paper work to be
done and the requests that had to be filed first, not to mention
the identity charts to be filled out. “Soon, soon…” he’d say with
annoying smoothness.

Root hadn’t really liked Studaben Picklepug
from the get go. He seemed to have so many secrets, so many
carnival tricks behind the two-ring circus of his eyes and the way
he staged himself, so slick and glossy, it made her skin crawl. He
was hiding something. Root didn’t know what exactly, but something
didn’t feel right.

Debra Mullins by Scandal of the Black Rose
Batman Vol. 3: Death of the Family by Scott Snyder
Murder of the Cat's Meow: A Scumble River Mystery by Denise Swanson
Fobbit by David Abrams
For His Protection by Amber A. Bardan
The Score by Kiki Swinson
Magic by Danielle Steel
El lamento de la Garza by Lian Hearn
A Christmas Proposal: A Hidden Threat Short Story by Sherri Hayes
James Munkers by Lindsey Little