The Redemption of Pontius Pilate 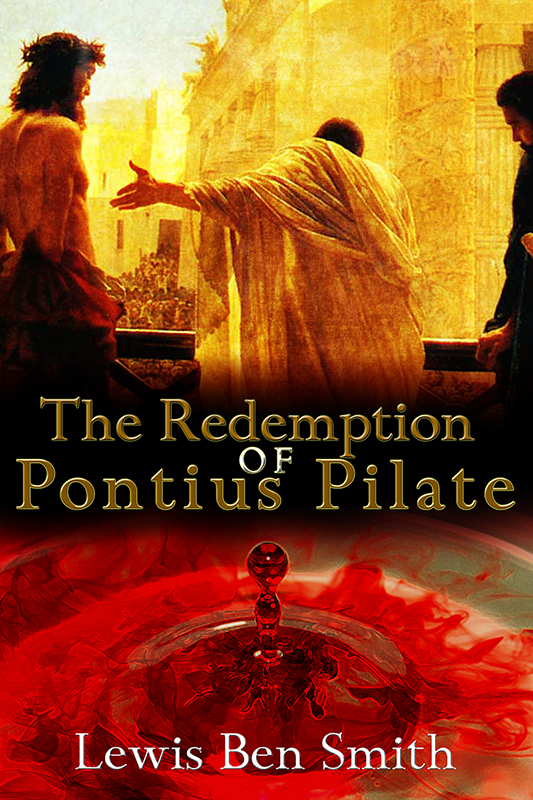 The Redemption of Pontius Pilate

Without limiting the rights under copyright reserved above, no part of this publication may be reproduced, stored in or introduced into a retrieval system, or transmitted, in any form, or by any means (electronic, mechanical, photocopying, recording, or otherwise), without the prior written permission of both the copyright owner and the above publisher of this book.

The scanning, uploading, and distribution of this book via the Internet or via any other means without the permission of the publisher is illegal and punishable by law. Please purchase only authorized electronic editions, and do not participate in or encourage electronic piracy of copyrighted materials. Your support of the author's rights is appreciated.

The publisher does not have any control over and does not assume any responsibility for author or third-party websites or their content.

“CRUCIFY HIM!” the crowd roared. The force of their rage was physical, gnawing and hungry, ferocious in its anger. It hovered over them like a sentient creature, sending black tendrils of hate into their midst, inflaming ordinary country folk and city dwellers into a blind, howling mob.

The Prefect of Judea was taken aback by their rage, and worn down by their persistence. It had started in the middle of the night, when his guards had roused him from a fitful slumber to inform him that his judgment was urgently required by the High Priest and his cronies. He had been surprised at first that Caiaphas had brought such an enormous mob with him, but its purpose soon became obvious. The old snake was not leaving Pilate any room to maneuver this time! It was very obvious that he wanted Jesus of Nazareth dead.

Of course Pilate knew who Jesus wasâeveryone in Judea and the Decapolis had heard of the wandering teacher and miracle worker who seemed to delight in turning the religious establishment of the Jews on its head. Pilate had ordered the itinerant teacher investigated by his agents, to see if he posed any threat to Rome, and had satisfied himself that the Galilean was nothing but a harmless religious mystic. Even when he had entered the city a few days earlier and a fawning crowd had offered to crown him as King of the Jews, Jesus had rejected their offer, leaving many of them shaking their heads in wonder and disappointment. Pilate had been relieved when he witnessed that moment; it confirmed his earlier judgment about the Galilean, and seemingly boded well for a quiet and uneventful Passover seasonâsomething anyone who had ever governed this difficult and rebellious province would recognize as a rarity.

But then the Supreme Council of the Jews had arrested Jesus on trumped up charges and grilled him for an entire evening. Pilate had heard of the arrest before he went to bed, and figured the Jews would try Jesus by their own law and order him beaten with rods and expelled from the city. Regrettable, perhaps, but the man had been provoking them for months, challenging their control of the Jewish religion that governed several million of the Empire's subjects and citizens.

Then they had shown up at the Praetorium, demanding that the Galilean be crucifiedâa death Rome reserved only for the worst offendersârebellious slaves or non-citizens who had brought death and suffering to the people of Rome. This Galilean preacher had done nothing to merit such a fate, Pilate thought. He initially tried to dismiss the crowd out of sheer irritation, but it was obvious Caiaphas and his old father-in-law, Annas, who controlled the High Priesthood, were out for blood.

Pilate had interviewed Jesus privately, and emerged perplexed and distressed. This was no ordinary man or wandering fanatic! First of all, he required no interpreter, even though Pilate had secured one from among Jesus' disciplesâthe Galilean's Latin was as perfect and flawless as if he were born on Capitoline Hill! His calm, steady gaze and cryptic answers troubled the short-tempered governor, and the bullying tactics of his accusers angered Pilate. He had tried fobbing Jesus off to Herod's court, but the Tetrarch of Galilee had sent Jesus back to him in a couple of hours, roughed up a bit and wrapped in one of Herod's cast-off purple robes. As usual, Herod had refused to do anything useful, neither condemning nor protecting the Galilean.

Pilate had then ordered Jesus beaten by his soldiers, hoping to placate the mob's blood lust. The men had exceeded his orders, nearly flaying the Galilean with a cat o'nine tails, but even that had not satisfied the angry Jews congregated in the courtyard of the Praetorium. They saw the battered and bloody form, barely able to stand, and took up the hateful chant again. Pilate had pulled Jesus back into the building again and interrogated him a second time. Jesus proved reluctant to answer at first and Pilate burst forth in annoyance: “Do you not know that I have the power to crucify you, and the power to set you free?”

Jesus raised his battered head and looked straight at the governor. The bruises and swelling had not subtracted an iota from the power of his gaze as he said calmly: “You have no power over me, except that which is given to you from above. Therefore those who delivered me up to you have the greater guilt.”

It was that statement, with its simple assessment, that haunted Pilate as he stood before the mob again. In one simple sentence, Jesus had placed
him
on trial, and pronounced him guiltyâperhaps not as guilty as the religious leaders who still stood outside, urging the crowd to keep up that awful chant, but guilty still. Pilate sat down in the judgment seat overlooking the courtyard and held up his hands for silence. He could feel the rustling of a single sheet of papyrus that he had stuffed into the sinus of his toga, a note from his wife, Procula Porcia, begging him to have nothing to do with “the death of this righteous man.”

Once more the governor pronounced Jesus innocent of any crime. The crowd's angry shouts immediately rejected his verdict. Suddenly from the back of the mob, the stern voice of Caiaphas the High Priest rang out.

“If you release this man, you are no friend of Caesar's!” he snapped. “For he called himself a kingâand whoever makes himself a king is Caesar's enemy!”

Pilate turned to his servant, Democles, and whispered in his ear. The Greek slave nodded and disappeared into the Praetorium. Pilate slowly stood and walked to the edge of the raised platform where his judgment seat stood. The crowd slowly fell silent as they beheld the thunder on his brow. The Roman governor had been a terror to the local community for seven years, and had not hesitated to kill any Jews who defied him. At the same time, they knew that Emperor Tiberius had already reprimanded him more than once for his brutality and insensitivity to their customs. If they reported him to Rome again, they might secure his dismissalâalthough that would do them no good if they died here in the courtyard with a Roman gladius between their ribs! Half fearful, half angry, they stared at this man who was the embodiment of the mighty Roman Empire.

Democles appeared at Pilate's side with a basin of water in his hands and a white towel draped over his arm. Pilate nodded and dipped his hands in the water three times, then raised them to the crowd.

“Let all men see that I am innocent of this man's blood!” he cried aloud.

But then he looked in horror at his own hands. They were dripping with deep, crimson fluid! The drops pattered down on the white marble before him as the Jews recoiled in horror. Pilate cried in revulsion and looked in the bowl. It was an abattoir, filled with crimson. He struck it from Democles' hands and it shattered on the marble platform, sprinkling his robes with crimson drops. He grabbed the towel and wiped his hands repeatedly, but the blood would not come off. However much he rubbed his hands, they were still soaked with the blood . . . the blood . . .

“THE BLOOD!!' he screamed, sitting up abruptly in his bed. His wife started next to him, then sadly shook her head and put her arms around him in sympathy. He accepted her embrace for a moment, but then shrugged freeâno true Roman man fled to a woman's arms for comfort. He staggered to his desk and poured himself a cup of wine from a nearby flagon, relishing the sour taste for a moment. Forty days! Forty days since he crucified the Galileanâand the same dream had returned to him every night! Groaning, he put his face in his hands. How had he come to this?

Lucius Pontius Pilate was born in the hills overlooking Capua in the fifteenth year of the Emperor Augustus, the firstborn son of an ancient and honorable plebeian family. His father was a career soldier and diplomat who had survived the civil wars between Pompey, Julius Caesar, Octavian, and Marc Antony by trimming his political sails and displaying an unerring instinct for picking the winning faction. He had been rewarded, after Octavian's victory, with a seat in the Roman Senate, and the governorship of a series of provinces. He also cultivated the friendship and trust of Augustus' right-hand man and son-in-law, Marcus Agrippa.

So it was that the eldest son of Decimus Pontius Pilate was destined to ascend the
cursus honorum
, the succession of offices young Roman men were expected to hold as they ascended the ladder of status and respectability. At age twelve, Pilate was sent to the Campus Martius, the nearest military camp to Rome itself, to train as a soldier. At sixteen he was assigned as a
conterburnalisâ
a junior officerâin the Roman legions under Tiberius Caesar, the adopted son of the Emperor and Rome's leading general since the death of Agrippa twelve years earlier.

Pilate was not a natural soldier, but he was a hard-working and conscientious one. Wielding a blade didn't come naturally to him, so he spent long hours training and practicing until it looked natural. He didn't have that effortless ease with the enlisted men that had made Caesar and Pompey so beloved of their soldiers, so he tried to be stern and fair, and the soldiers respected him, even if they didn't like him very much.