Read The Road to Freedom Online

The Road to Freedom 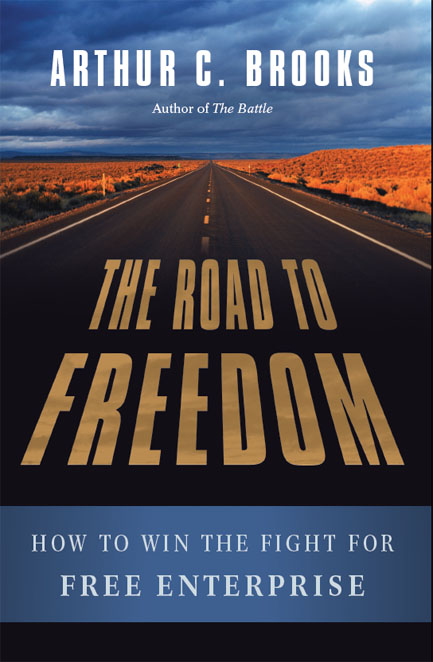 THE ROAD TO FREEDOM

THE ROAD TO
FREEDOM

HOW TO WIN THE FIGHT FOR
FREE ENTERPRISE

A MEMBER OF THE PERSEUS BOOKS GROUP
NEW YORK

All rights reserved. Printed in the United States of America. No part of this book may be reproduced in any manner whatsoever without written permission except in the case of brief quotations embodied in critical articles and reviews. For information, address Basic Books, 387 Park Avenue South, New York, NY 10016â8810.

Books published by Basic Books are available at special discounts for bulk purchases in the United States by corporations, institutions, and other organizations. For more information, please contact the Special Markets Department at the Perseus Books Group, 2300 Chestnut Street, Suite 200, Philadelphia, PA 19103, or call (800) 810â4145, ext. 5000, or e-mail
special.mar[email protected]
.

A CIP catalog record for this book is available from the Library of Congress.

To the entrepreneurs around the world who earn their success and create the opportunities for the rest of us to earn ours
.

1. Why Make the Moral Case for Free Enterprise?

2. A System That Allows Us to Earn Our Success

3. A System That Is Fair

4. A System for Good Samaritans

6. The Government We Want: Uncle Sam, or Uncle Sugar?

7. Winning the Moral Debate on the Policy Issues That Matter Most to Americans

The Road to Freedom

A
re you satisfied or dissatisfied with the way the nation is being governed?

If you are like 81 percent of Americans, your answer is “dissatisfied.”
1
Since that question was first asked in the early 1970s, dissatisfaction has never been higher. At the height of the Watergate scandal in 1974, it was only 66 percent. When the stock market crashed in 2008, it was 72 percent.

Some of the dissatisfied Americans are easy to spot. They gather on the Mall in Washington, D.C., for a Tea Party rally against the growth of government. Or they take over Zuccotti Park in lower Manhattan as part of an “Occupy Wall Street” demonstration against big government's codependent wife, corporate cronyism.

But these demonstrators are only a tiny portion of the quarter-billion dissatisfied Americans. The majority are ordinary people, too busy to attend a demonstration (let alone sleep in a park), but
nonetheless simmering with frustration over what is happening to our country.

For years now, it seems as if America has been in decline, unable to pull out of an economic funk. The government has responded by bailing out powerful corporations that are “too big to fail” and delivering a stimulus package that doesn't seem to stimulate anything other than the government itself. Older Americans see the country they have loved their whole lives changing for the worse, and young people see their future prosperity vanishing into thin air.

So what's the solution? Some will tell you it's the 2012 election. In 2008, Americans elected a slate of politicians who promised solutions to growing national problems. But according to many economists and most measures of public opinion, the current administration has made those problems worse.
2
The 2012 election should be a chance to set things right. Right?

The 2012 election is important, to be sure. The continuation of many policiesâfrom ObamaCare, to “Too Big to Fail,” to Keynesian-style stimulus packagesâis at stake.

But the election is not a panacea for all of the problems facing the country; it's not even close. If America's current malaise were the product of just three years of bad ideas and poor leadership, we could solve it by brooming out a bunch of politicians. Unfortunately, the predicament is the product of nearly a century of accumulated policy, and the solution won't come with one election.

Consider the crushing public debt. As I write these words in the fall of 2011, the national debt comes to $48,000 for every man, woman, and child in America.
3
One-third of that amount has accumulated during the past three years, but the rest of the debt existed before the current recession and the current administration.
It is a long-standing, unwelcome, and bipartisan gift to our children and grandchildren. Government spending at all levels (federal, state, and local) amounted to 15 percent of GDP in 1940. In 1980, it was 30 percent. By 1990, it was 32 percent. Today, it is 36 percent. For many years, policy makers have turned this flywheel, and today it packs terrifying force.

The Congressional Budget Office tells us that by 2038, government spending will be 50 percent of GDP. Think about this for a moment. Americans will work from January 1 until June 30 each year just to pay for the governmentâa government that a large majority believes has too much power, tries to do too much, and provides unsatisfactory services.
4

It's going to take a lot more than one election to get us off what Nobel laureate Friedrich Hayek called the “road to serfdom.” Americans today are experiencing a low-grade, virtual servitude to an ever-expanding, unaccountable government that, starved for tax revenues, has appropriated for itself funds that entrepreneurs could have used to grow the economy, has created a protected class of government workers and crony corporations that play by a different set of rules than the rest of America, and has consequently left the nation in hock for generations to come.

Some believe this road inevitably leads us to one of two places: social democracy or long-term austerity. In the former case, the U.S. finally hits a tipping point where few people actually pay for their share of the growing government. At this point, the majority of Americans become truly invested in a social welfare state, which stabilizes at some very high level of taxation and government social spending. Think Norway or Holland.

But social democracy is expensive. It requires that America emerge successfully from the current economic crisis. If it doesn't, we get something worse, in which the welfare state collapses under
its own weight. That is, at some point, citizens of the world wise up and stop lending the U.S. money, or at least stop lending at relatively low interest rates. In the second scenario, your kids are poorer than you, and their kids poorer than them. Think Greece, Spain, Portugal, and Ireland. After years of deficit spending, these failing welfare states have become unsustainable, forcing their citizens to endure severe austerity. Spanish youth unemployment today is almost 50 percent, and about half of adults under age thirty-five live with their parents.
5
In Greece, the general unemployment rate is 17 percent and quickly rising, and the government's external debt is projected to hit 190 percent of GDP by 2014.
6
Yet, after years of this misery, the citizens of these countries know no other way but to clamor for even more government solutions that effectively steal their children's future.

In other words, either social democracy wins, or we all lose. We need to get off this road. But I believe it's going to take a cultural reformation to do soâa return to our founding ideals of free enterprise. This book is my attempt to show how.

WHAT IS FREE ENTERPRISE?
It is the system of values and laws that respects private property and limits government, encourages competition and industry, celebrates achievement based on merit, and creates individual opportunity. Under free enterprise, people can pursue their own ends, and they reap the rewards and consequences, positive and negative, of their own actions.
7
Free enterprise requires trust in markets to produce the most desirable outcomes for society. It is the opposite of
statism
, which is the belief that the government is generally the best, fairest, and most trustworthy entity to distribute resources and coordinate our economic lives.

At first glance, moving America back toward free enterprise should be simple. Two years ago, I published a book showing that about 70 percent of Americans say they love free enterprise. They favor it over all other alternatives and are proud of the fact that the nation is based on this ideal. Large majorities say they want less government than we currently have.
8

But if that's true, why is the government today so bloated, so powerful, and so imperious? Why do Americans acquiesce to almost every expansion of governmentâbeyond the boundaries of what the Founders intended, and beyond what they say they actually want? For example, the Obama administration's health-care reforms are unpopular with a majority of citizens, yet in a poll fielded by CBS News/
New York Times
in 2010, 64 percent of people said they thought that government should provide health insurance for everyone.
9

This is a paradox, but not a mystery. On the one hand, citizens say they love free enterprise. On the other hand, they sure wouldn't mind a new government-funded rec center and maybe a few free prescription drugs, and politicians gladly oblige to win votes. Most people hardly have the time to consider the inconsistency between these things.

In America, the road to serfdom doesn't come from a knock in the night and a jackbooted thug. It comes from making one little compromise to the free enterprise system after another. Each sounds sort of appealing. No single one is enough to bring down the system. But add them all up, and here we are: 81 percent dissatisfied.

So what's the solution? How do we help Americans understand that unless they actively choose free enterprise and eschew big government, they will ultimately only get the latter? Some say Americans need to hear a more forceful argument than ever before
about the economic superiority of free enterprise over the alternatives. In other words, capitalism's advocates need to yell louder that free enterprise makes us richer than statism. Master the numbers, make some charts, and show Americans the evidence.

As a think tank president, I wish that strategy were correct. Nothing would make my job easier. But that strategy isn't correct. Materialistic arguments for free enterprise have been tried again and again. They have failed to stem the tide of big government.

Before We Met: A Novel by Whitehouse, Lucie
Aurorarama by Jean-Christophe Valtat
Kiss Me by Jillian Dodd
Once Written, Twice Shy (The Broken Men Chronicles) by Decevito, Carey
One Cuppa Brew: Book 1 in The Thyme for Tea Series by J. Louise Powell
The Day of the Guns by Mickey Spillane
Jalia and the Slavers (Jalia - World of Jalon) by John Booth
Off the Beaten Path: Eight Tales of the Paranormal by Graves, Jason T., Sant, Sharon, Roquet, Angela, La Porta, Monica, Putnam, Chip, Johnson, D.R., Langdon, Kath
Just Jackie by Edward Klein
Extraordinary Losers 1 by Jessica Alejandro