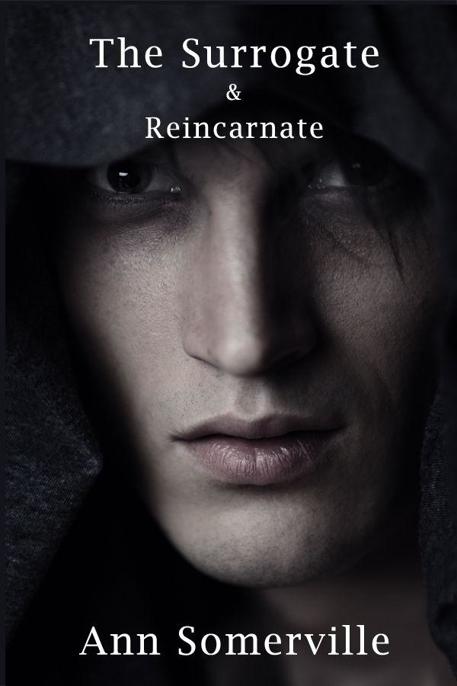 These stories are a work of fiction. The names, characters, places, and incidents are products of the writer’s imagination or have been used fictitiously and are not to be construed as real. Any resemblance to persons, living or dead, actual events, locale or organizations is entirely coincidental.

The Surrogate Copyright © 2004 by Ann Somerville

All Rights Are Reserved. No part of this book may be used or reproduced in any manner whatsoever without written permission, except in the case of brief quotations embodied in critical articles and reviews.

For more information please visit my website at
http://logophilos.net

This ebook is licensed for your personal enjoyment only. This ebook may not be re-sold or given away to other people. If you would like to share this book with another person, please purchase an additional copy for each person you share it with. If you’re reading this book and did not purchase it, or it was not purchased for your use only, then you should return to Smashwords.com and purchase your own copy. Thank you for respecting the hard work of this author.

I resisted the urge to sigh. “Nikolas Ekinze. The same as it was yesterday.”

The tasking master looked up. “That cheeky mouth of yours won’t get you work, boy. Still looking for locksmithing work?”

“
Hmmm. Nothing along those lines.” What a surprise. “Won’t work in the mines?”

“
Not unless I’m actually starving to death, no.” I was pretty near the end of my funds, but the mines would mean a short and unpleasant life for someone of my height and build. “But I’ll do anything else.”

“
There
is
nothing else, boy. We’ve got locksmiths and metal workers coming out of our ears. Every journeyman tinsmith, silversmith and clockmaker from Jendon is here in Egin. We can take our pick.” He looked me up and down. “If you had a bit more flesh on you, there’s a stable wanting someone to shift shit. But you’d pass out in half a day.”

But the tasking master shook his head. “We’ve got strong lads aplenty, with more brawn and none of your smart mouth. There’s nothing here today. Come back tomorrow.”

Same story, every day. My previous job had lasted for a month, working in a forge, but the thing caught fire and burned down, killing the blacksmith and two of his men. I escaped with the clothes on my back, and my coin purse in my pocket. Since then, I’d been living on what I could earn casually—or beg—and hoping for work that wouldn’t kill or cripple me. But the tasking master was right—I was nothing special in a city full of men driven from their villages by the drought in our land. Egin port was a magnet for those looking for something, anything, to sustain themselves and their families back home. I had only myself to support, so I was one of the lucky ones, I guess. But with hunger gnawing at my stomach, and the prospect of trying to make a silver coin and three copper ones last me for lodging and food until I could get work, I didn’t feel very lucky.

I walked out of the work hall, wondering if I should just take my chances and go back home. But the drought still continued, and even if the rains came, it would be half a year before there were crops and food and any use for a twenty-three year old male with a minor Talent and a skill that only people with money and leisure needed. Locks weren’t much use when you had nothing to preserve.

“
Are you looking for work?”

I stopped and turned to the source of the voice. It was a tall man, dressed all in unrelieved black, his hair covered by a cloak hood, and his eyes hidden in its shadow. “Yes, I am. Do you need someone? I’m an excellent locksmith....”

“
I have no need of your skills.” I realised the man was accompanied by two guards from the temple of Paon. That explained the dark clothing and the arrogant air, I thought. “My name is Jaime. I have work for up to a year, if you want it.”

But Jaime shook his head. “I can’t tell you that here, or now. Come to the temple in an hour. If you’re not there, the offer is gone.”

And then he walked away, the two guards a pace behind him. I stood there with my mouth slightly open in surprise. What kind of work could need my presence but not my skill? Did they need someone to polish their bloody candlesticks?

Even though I was desperate, I hesitated a little. Paon was a dark god worshipped throughout the land of Gidin, though not in my own where we held the Gidinian gods in contempt. But here, the people feared three deities—Neku, goddess of the moon, Fri, god of the sky and the sun, and Paon, the god of the earth and all beneath it. Paon was held to be the most powerful, and the most vengeful—from him, the Gidinians believed, all punishment, all fertility, all fortune and all prosperity came. He was a greedy god, demanding sacrifices, monetary offerings and obedience. His priests wore nothing but black robes, the temple guards were all decked out in darkened bronze, crow feathers and black woollen tunics. I didn’t like the idea of spending an hour in his temple, let alone a year.

But still, Paon was a pagan deity with no power over those who did not believe in him, and a temple was at least not a coal or copper mine. I could
talk
to this Jaime, and maybe beg a little food from him as compensation for taking the trouble to come to him. I worked with silver because I had a silver tongue, I’d been told more than once, and it was true I’d spun out my meagre savings as much by charm as frugality. I wasn’t too proud to beg from this mysterious man.

The temple was set in a huge walled area right in the middle of the city, not far from the palace and nearly twice its size. I’d honestly never thought to set foot in either building, and I couldn’t hold back a shiver as I walked up the red marble steps to the imposing column fronted entrance. Giving Jaime’s name gave me admittance, and I was told rather rudely to wait in an antechamber that overlooked the main hall of worship, whose purpose seemed to be to impress on any supplicant just how unworthy and small they were in comparison to Paon’s magnificence. The hall was full of the faithful, bowing and praying and chanting, and the air was thick with the scent of sickly incense and burned, dead things sacrifice to the god.

I was made to wait longer than I thought was polite or necessary, and Jaime, when he came to collect me, didn’t explain or apologise, which didn’t improve my temper. Only the growling in my stomach made me stay. I thought I had no pride left—it seemed there was a trickle in me after all.

He took me through long corridors and down a series of steps to a rather dark and small room—I tried to resist the temptation to call it a cell, but that’s what it felt like. There was a table and two chairs, and I was ordered to sit on one. He took the other. I noticed he still didn’t remove his hood. The only light was from a high window, so all I could really see clearly were his hands, and a small area of chin. The rest was in shadow. “What is your name?”

“
Nikolas.” I waited to see if he wanted more—apparently not. “What do you need someone to do?”

“
Not yet. Are you in good health? How long since you came from Jendon?”

“
Father and brothers. No one else.”

He nodded. “Are you a virgin?”

He tilted his head and for the first time, I could see dark, cold eyes looking back at me. “Answer the question. I will pay you for your time this morning. Three silver pieces.”

I swallowed. That was a generous week’s pay for a skilled workman. “No, I’m not a virgin.”

“
Lain with women only, or with men?”

“
Both,” I admitted reluctantly. I’d got the impression that the Gidinians didn’t really like men sleeping with their own sex. Not that this stopped me finding partners for hurried fumblings behind inns, and none of them seemed to care whether the mouth or arse they were thrusting their cocks into belonged to a man or a woman. The sex and the occasional warm bed had been equally welcome.

Jaime didn’t seem to care though. “I wish to determine that you are free from disease. One of our temple physicians will examine you. Remove your clothes.”

“
Not on your bloody life.”

He stood. “Then leave,” he said coldly, already walking to the door.

“
That was on the condition I got cooperation. Get out.”

He had his hand on the door.

Was he just a pervert? Was this cheaper or more discreet than a brothel? Gritting my teeth, I obeyed, my balls crawling up inside me as I suffered his silent examination. At least it was only with his eyes.

As I did as I was told, he went to the door and spoke to someone outside it. In only a moment or two, the door opened and an elderly man carrying a small case, came in and bowed. “Here, ensure he is fit,” Jaime said, before leaving the room, and me with what I assumed was the temple physician.

The man spoke to me only to order me to open my mouth, tilt my head this way or that, raise my arms, stand, sit, bend over, cough and spread my legs. I yelled when he stuck something up my arse, but he didn’t react at all, except to take my balls in his hand and heft them as if checking they were correct weight. I’d already decided I was dealing with a couple of madmen here, and if the silver was not forthcoming, then I was going to report them to...to, well, whoever policed the bloody perverts in this cursed city.

Finally the old bastard was done, and without a word to me, he slipped out of the room. No one said I could dress, but then no one said I couldn’t, so I did, feeling violated and angry. I’m not ashamed of my body, far from it, but I like to have the choosing of who gets to look at it, and especially inside it. That physician had been lucky I’m not a man prone to violence because he’d come close to being punched when his nasty little probe went where I would suffer a cock, a finger or a tongue and nothing else—and that by invitation only.