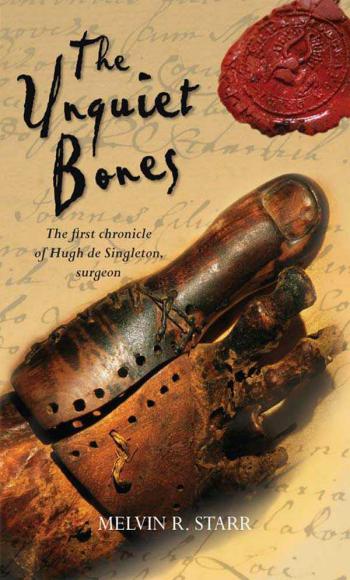 Readers’ praise for THE UNQUIET BONES

Thoughtful and curious, surgeon Hugh is an engaging character who feels totally real.

Absolutely loved the book and cannot wait for the next one. One of the best medieval genre novels I’ve read in years. More of the same please – soon!

I enjoyed the setting, the period, the very realistic characters and the dry wit.

I enjoyed the story, and the insight into life in 14th century Britain. A lovely way to learn history – I'm looking forward to the sequel.

I read all of it in one go; it’s quite the best medieval mystery I’ve read in a while. I teach medieval history, so it’s always nice to read something by someone who actually knows what they're talking about. Can’t wait for the next one!

The first chronicle of Hugh de Singleton is a great read.

I found your novel a most enjoyable read and a rewarding venture into the history of Bampton in the company of real and entertaining characters. Should I find myself in the UK again I will definitely stop for a peek at St Beornwald’s.

A wonderful story, which could have been ghost-written by a true 14th century surgeon. I’m looking forward to reading more of his work.

A great read – appreciate the detail – and the glossary. I hope you have more to follow!

As a retired nurse I enjoy reading the history of medicine. This book fed my hunger and left me wanting more. I am sending a donation to help save the beautiful old church in the story.

This is an outstanding book and I found it impossible to put down. I shall look forward to the next chronicle with eager anticipation.

The first chronicle of Hugh de Singleton was first rate all the way. Amusing, educational, interesting, clever, and realistic all rolled into one fantastic piece of work. I am eagerly awaiting the second.

Just a few lines to say how much I have enjoyed reading
The Unquiet Bones
. It is going on my ‘keeper shelf’ with my other favourite medieval mysteries. I hope this book is the first of many.

An excellent first novel. The plot is well thought out and moves along nicely, with enough in the way of twists, turns, and red herrings to keep the reader interested.

What an outstanding first novel! Great plot, easy to read…I’ve read all the Cadfael books and
The Unquiet Bones
exceeds them all. Can’t wait for the next book in the series.

Excellent debut of a fine new protagonist…the author shows a firm grasp of history. We can cheerfully hope that this will be the first of many.

I have never written to an author before but I really feel I must thank you for
The Unquiet Bones
. I have so enjoyed this book. I am a great fan of medieval whodunits and this must rank as one of the best.

All in all this was a great first novel and I will purchase any others forthcoming from this author.

The book contains fascinating insights into medieval surgery.
The Unquiet Bones
is a delight to read and I'm looking forward to the next installment.

I have just finished
The Unquiet Bones
and I loved it – a breath of fresh medieval air.

You’ve created a real sense of place, coupled with characters a reader can like and be interested in. Hugh is a great hero and I look forward to more of his adventures.

It was a wonderful read; I can’t wait to see where Master Hugh’s adventures will take him. 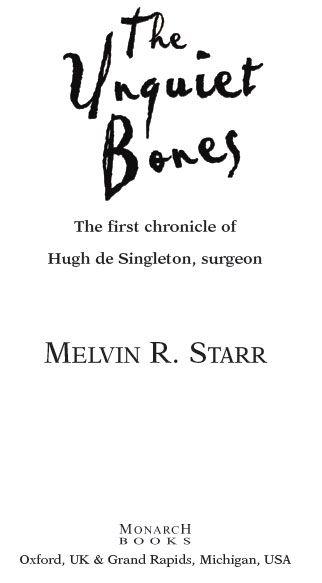 Copyright © 2008 Mel Starr.
The right of Mel Starr to be identified as author of this work has been asserted by him in accordance with the Copyright, Designs and Patents Act 1988.

All rights reserved. No part of this publication may be reproduced or transmitted in any form or by any means, electronic or mechanical, including photocopy, recording or any information storage and retrieval system, without permission in writing from the publisher.

Unless otherwise stated, Scripture quotations are taken from the Holy Bible, New International Version, © 1973, 1978, 1984 by the International Bible Society. Used by permission of Hodder & Stoughton Ltd. All rights reserved.

A Corpse at St Andrew’s Chapel

On a June afternoon in 1990 my wife and I discovered The Old Rectory, a delightful B&B in the tiny village of Mavesyn Ridware. Tony and Lis Page, the proprietors, became good friends. Nearly a decade later Tony and Lis moved to Bampton, and Susan and I were able to visit them there in 2001. I saw immediately the town’s potential for the novel I intended to write.

Tony and Lis have been a great resource for the history of Bampton, for which I am very grateful.

Dr John Blair, of Queen’s College, Oxford, has written several papers illuminating the history of Bampton. These have been a great help, especially in understanding the odd situation of a medieval parish church staffed by three vicars.

When he learned that I had written an as yet unpublished novel, Dr Dan Runyon, of Spring Arbor University, invited me to speak to his classes about the trials of a rookie writer. Dan sent some sample chapters to his friend, Tony Collins, Editorial Director of Monarch Books at Lion Hudson plc. Thanks, Dan.

And thanks go to Tony Collins, my editor Jan Greenough, and the people at Lion Hudson for their willingness to publish a new author with no track record.

Before trying my hand as a writer I spent thirty-nine years teaching history. The experience gave me a greater respect for the teachers and professors who struggled to instill some wisdom into my own youthful mind. Thanks to:

Dan Jensen, whose enthusiasm for teaching history was infectious, and who also pounced on bad writing.

Bailiff:
A lord’s chief manorial representative. He oversaw all operations, collected rents and fines, and enforced labor service. Not a popular fellow.

Bolt:
A short, heavy, blunt arrow, shot from a crossbow.

Burgher:
A town merchant or tradesman.

Bylaw:
A community assembly. The term applied to the meeting and to the laws and regulations passed.

Cautery:
To sear with a heated metal tool. Generally used to seal a wound.

Chamberlain:
The keeper of a lord’s chamber, wardrobe and personal items.

Chauces:
Tight-fitting trousers, often of different colors for each leg.

Childwite:
A fine for having a child out of wedlock.

Christmas Oblation:
An offering due to the church at Christmas.

Church of St Beornwald:
Today the Church of St Mary the Virgin in Bampton, in the fourteenth century it was dedicated to an obscure Saxon saint enshrined in the church.

Coppicing:
The practice of cutting trees, especially ash and poplar, so that a thicket of small saplings would grow from the stump. These shoots were used for everything from arrows to rafters, depending upon how much they were permitted to grow.

Cresset:
A bowl of oil with a floating wick used for lighting.

Demesne:
Land directly exploited by a lord, and worked by his villeins, as opposed to land a lord might rent to tenants.

Deodand:
An object which caused accidental death. The item was sold and the price given to the king.

Dexter:
A war horse; larger than pack-horses and palfreys. Also, the right-hand direction.

Ember Day:
A day of fasting, prayer, and requesting forgiveness of sins. Observed four times per year, on successive Wednesdays, Fridays, and Saturdays.

Epiphany:
January 6. Ended the twelve-day Christmas holiday. Celebrated the coming of the Magi to worship Christ.

Extreme Unction:
“Last rites.” A sacrament for the dying. It must not be premature. A recipient who recovered was considered as good as dead. He must fast perpetually, go barefoot, and abstain from sexual relations.

Feast of the Assumption:
August 15. Marked the day Mary was supposedly carried to heaven.

Fewterer:
Keeper of the lord’s kennel and hounds.

Furlong:
A bundle of strips of land, of different tenants, but generally planted with the same crop.

Goodrich Castle:
Rebuilt in the thirteenth century. In Herefordshire, near the southern Welsh border. Came to Gilbert Talbot through his mother, Elizabeth Comyn.

Groom:
A lower-rank servant to a lord. Often a teen-aged youth. Occasionally assistant to a valet.

Haberdasher:
Merchant who sold household items such as pins, buckles, hats, and purses.

Hayward:
A manorial officer in charge of fences, hedges, enclosures, and fields. Usually a half-virgater or mid-level villager, he served under the reeve. Also called a beadle.

Heriot:
An inheritance tax paid to the lord of the manor, usually the heir’s best animal.

Hocktide:
The Sunday after Easter; a time of paying rents and taxes. Therefore, getting out of hock.

Hypocras:
Spiced wine. Sugar, cinnamon, ginger, cloves, and nutmeg were often in the mix. Usually served at the end of a meal.

King’s eyre:
A royal circuit court, presided over generally by a traveling judge.

Lammas Day:
August 1, when thanks was given for a successful wheat harvest.

Leirwite:
A fine for sexual relations out of wedlock.

Lettuce:
Bitter-tasting wild lettuce was sometimes added to soups, but was best known for its sedative and narcotic effect, especially when going to seed.

Marshalsea:
The stables and associated accoutrements.

Maslin:
A bread made from a mixture of grains; commonly wheat and rye or barley and rye.

Metatarses:
Small bones of the foot.

Michaelmas:
September 29. The feast signaled the end of the harvest. The last rents and tithes were due.

Palfrey:
A riding horse with a comfortable gait.

Pax Board:
An object, frequently painted with sacred scenes, which was passed through the medieval church during services for all present to kiss.

Phlebotomy:
The letting of blood in the treatment of disease.

Pollard:
To cut a tree back to produce dense new growth.

Rector:
A priest in charge of a parish. He might be an absentee, and hire a vicar or curate to serve in his place.

Reeve:
The most important manor official, although he did not outrank the bailiff. Elected by tenants from among themselves, often the best husbandman. He had responsibility for fields, buildings, and enforcing labor service.

Rogation Sunday:
Five weeks after Easter. A time of asking God to bless the new growing season, accompanied by a parade around the boundaries of the village.

St Andrew’s Chapel:
An ancient chapel a few hundred yards east of Bampton dating to before the Norman conquest.

St Catharine’s Day:
November 25. St Catherine was the most popular female saint of medieval Europe. Processions were held in her honor on her feast day.

Scrofula:
A swelling of lymph nodes on the neck.

Squab:
a young pigeon about four or five weeks old.

Subtlety:
An elaborate dessert, served between courses (removes) of a meal. Often more for show than consumption.

Tenant:
A free peasant who rented land from his lord. He could pay his rent in labor, or more likely by the fourteenth century, in cash.

Terce:
The canonical service at 9 a.m.

Trepanning:
Removing a circular section of the skull, usually to relieve headaches. It sometimes worked!

Valet:
A high-ranking servant to a lord. A chamberlain, for example.

Vicar:
A priest who serves a parish but is not entitled to its tithes.

Villein:
A non-free peasant. He could not leave his land or service to his lord, or sell animals without permission. But if he could escape his manor for a year and a day he would be free.

Week-work:
The two or three days of work per week owed to the lord by a villein.