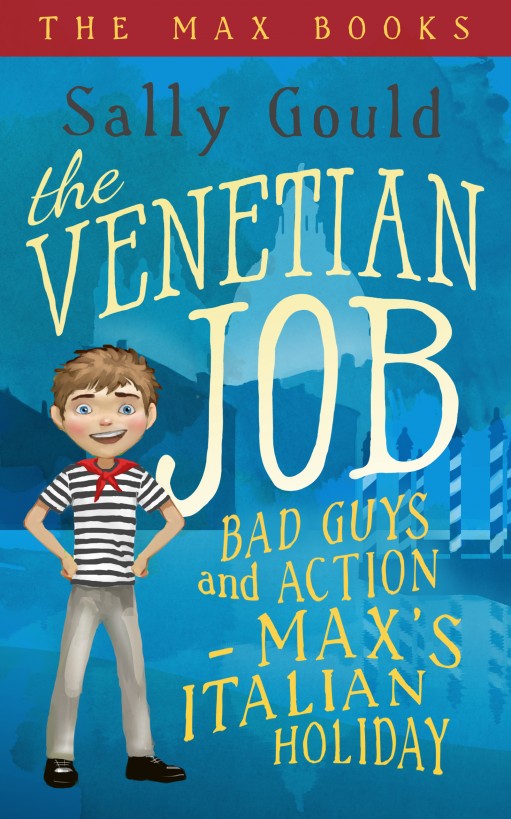 "
You can have the
universe, but leave Italy for me."

from
Attila,
by
Giuseppe Verdi

7.
BOAT CHASE ON THE GRAND CANAL

Other
books by Sally Gould:

M
y friends would be doing
math at this time of the day, but I wasn't because I was in Italy.
Sicily, to be exact. We were driving along a four-lane highway
where almost every car was speeding. Dad was biting his bottom lip,
because he was concentrating hard.

Charlie had stuck his head outside the car
window to record crazy drivers, so he could show his friends when
he got home. Cars whizzed past us so fast it felt like we weren't
moving. And the crazy drivers seemed to think no matter what they
did, everyone else would get out of their way.

Mom stopped reading her murder mystery and
stared out the front window at Mount Etna. Even though it was
March, the top of it was covered in snow. Mom loved mountains. That
was why we were in Sicily, because she'd always wanted to see Mount
Etna.

Charlie sat back, put his phone down and
leaned across the back seat of the car. Nudging me, he whispered,
"I bet you we're related to Mr. Mafia."

"Who?" I hated when Charlie did that. When
he says something as though I should know what he's talking about,
but I don't know, so I've got to ask him what he means and then I
sound dumb and he sounds smart.

"A mafia boss; an old guy who wears a black
suit and black sunglasses and who has bodyguards. He'd live in an
enormous house and be driven around in a big black car, and if
anyone does the wrong thing to his family, they'd better watch
out." Charlie gave me that smug look he gives when he's showing off
how much he knows.

I nodded as though I knew exactly what he
meant. And I sort of did. There were mafia guys at home. They were
bad; I knew that. A bit bad was okay, but I wouldn't want to be
related to anyone real bad.

Not that I believed Charlie. Mom wouldn't
have brought us to Sicily if we were related to a mafia boss. I
didn't think she would, anyway.

"It makes sense," whispered Charlie. "That's
why we've started this holiday in Sicily. To meet Mr. Mafia and the
rest of the family."

I swallowed. Real casual, I asked, "Mom, are
you related to a mafia boss?"

She took her eyes off Mount Etna to turn
round and glare at me. Then she glared at Charlie as if to say,
Don't scare your younger brother!

He fiddled with his phone. "It seemed a
reasonable deduction since we've come to Italy to meet your
relatives and Sicily is the first place we've come to."

"We've come to Italy for a holiday, not just
to meet my relatives. And most Sicilians aren't in the mafia."

I nodded as though she'd convinced me. When
she turned round to the front, Charlie and me looked at each other.
We each knew what the other was thinking. She was lying. We could
tell because she didn't look into our eyes. That meant one thing.
Her relatives lived in Sicily. Did that mean her grandfather or
uncle or someone was Mr. Mafia? Maybe; maybe not.

Suddenly Tom Tom, our satellite navigator,
got real excited. In his robotic-newsreader voice, he said, "Bear
right, then go through the roundabout, second exit, then go
straight ahead for two hundred metres, stay in the right lane, then
turn right."

Charlie sniggered and Mom quickly opened her
book and began to read. I stated the obvious: "Tom Tom is always
right." We'd been using him for less than a week and it was already
like he was part of the family. He loved disagreeing with Dad.

I turned round to see a bright yellow
Ferrari flash past us. A second later a car horn let out a long,
loud, scary sound. Then brakes screeched. Dad, who had been
following Tom Tom's instructions, yelled out something I'm not
allowed to say before he did a massive swerve. Charlie and me got
flung sideways. A moment later we realized we'd nearly been hit by
a car coming toward us.

For a minute nobody said anything. I reckon
it was still sinking in that some crazy Italian driver had nearly
killed us.

Charlie patted his phone "Got the whole
thing on video. Absolute proof all Italians are crazy."

Mom turned round and gave Charlie one of her
looks. "That was one bad driver. Don't generalize."

Charlie nodded to her and then nudged me.
"Yeah, and all Italians are saints too. Lucky we're
half-Italian."

"Do you really think we're related to a
mafia boss?"

"It'd be cool." He lowered his voice and
added, "Except I read on the internet there's two mafia families in
Sicily who are killing each other. One family reckons the other
family is invading its territory."

"Shh," whispered Charlie, but it was too
late because Mom had already turned round.

"That's enough," she said, looking from me
to Charlie and back to me. "I don't want to hear another word about
the mafia or my relatives. Is that clear?"

"Yes, Mom," we answered like a pair of
robots.

When she turned her back to us again, we
glanced at each other. We must be related to Mr. Mafia!

Suddenly I felt sick. It all made sense. Why
Mom never mentioned exactly where her relatives lived or what they
did. She was ashamed of them. She probably hadn't wanted to bring
us here. I bet they ordered her to because the big mafia boss
wanted to meet Charlie and me.

Maybe our whole lives were about to change.
Maybe we'd be expected to leave school and learn the business. Far
out, I didn't even know what they did. A cold shiver went up my
spine. All of a sudden I didn't want to be in Italy; I wanted to be
home.

W
e reached the center of
Taormina without being killed in a car accident. Getting a park in
Italy wasn't easy. The streets were narrow and cars parked wherever
they could. The only good thing about the four of us being squashed
into a tiny car was that we could fit into a small car space. Dad
had booked a family-size car to rent, but we'd been given a shoebox
with four wheels.

Dad patted Tom Tom before we got out of the
car; they were friends again because Tom Tom's directions had been
right as usual. We found a restaurant and sat down for lunch. Mom
was happy because we got a table outside the restaurant and she
could gaze at Mount Etna and the sea at the same time. And Charlie
was happy because he could check out every Maserati that drove
past.

As usual, Dad studied the menu as though the
waiter was going test him on it. I don't know why he needed to know
what pizza or pasta you could have when he always ordered fish.
Charlie and me didn't need to look at the menu. We always ordered
the same thing. Even Mom had given up trying to get us eat
something different.

It was when Charlie pointed to a blue
Maserati driving past that I noticed four
Carabinieri
over the other side of the street. They
were carrying machine guns because they were military police. Their
black uniforms, with the red stripe down the side of their
trousers, looked cool.

Charlie and me glanced at each other. What
were they doing in some tourist street full of restaurants? Not
making sure everyone was obeying the road rules, because no one in
Italy bothered with boring stuff like that. I'd already seen
Carabinieri
guys at the airport, but
why would they be here? And there were four of them. Even at the
airport in Rome they only strutted about in twos.

The waiter put my salami pizza in front of
me. Eating pizza every day was one of my favorite things about
Italy. At home, I'd be lucky to eat it once a week. When I bit into
a slice, I almost screamed. Far out, the salami was hot! What was
it with Sicily and hot salami?

"Max," Mom said, "I wouldn't mind that you
eat pizza for breakfast, lunch and dinner if you'd eat something
green with it." She held out a bowl of salad.

I took one lettuce leaf and removed every
piece of hot salami from my pizza.

Charlie gave me a sideways look. "You should
order a Margherita pizza too."

"Yeah—" He stopped and stared.

I followed his line of sight. At the front
of the restaurant, a string of very long, very shiny black limos
pulled up. There were five of them. Two men, wearing black suits
and black sunglasses, got out of the back of each car. Then a
little old man got out of the back seat of the middle car. He was
wearing a black suit and black sunglasses too, and walked with a
bit of a limp. I bet there was a story behind that limp.

From nowhere, two guys wearing blue jeans
and black shirts appeared and began talking excitedly to the little
old man. Two men in black grabbed the arms of the guys in black
shirts. One of the black-shirt guys was carrying on like a pork
chop, even though his arms were pinned behind his back. The little
old man talked to them for a few minutes then waved them away. The
bodyguards pushed the guys in black shirts away and the little old
man strode into the restaurant. It seemed like something out of a
movie. I looked round for a film crew, but the
Carabinieri
across the road seemed to be the only
other people interested. Maybe that sort of thing happened every
day in Sicily.

Charlie whispered to me, "They've got guns.
They must be mafia."

"How'd you know they've got guns?"

"Stuck down the waist of their trousers. I
saw one. I bet they have another one strapped to their leg."

I dropped my pizza. Another cold shiver went
up my spine. I didn't like guns. "Can we go to the hotel now?"

Dad gave me a dirty look. "May we finish our
lunch first?"

This looked serious. I wanted to finish
lunch and get out. Even Charlie was finishing his pizza real quick.
But Mom and Dad kept chatting about what sights they wanted to
visit as though nothing had changed. Were all parents dumb? Or were
Charlie and me real unlucky?

Blown Away by Sharon Sala
The Alchemist's Code by Dave Duncan
Even If the Sky Falls by Mia Garcia
The Shores of Death by Michael Moorcock
The Fugitive Game: Online With Kevin Mitnick by Littman, Jonathan
My Last Best Friend by Julie Bowe
Sophie's Halloo by Patricia Wynn
Freefall by Tess Oliver
Beyond Ransom (The Ransom Series) by Douglas, A.T.
Raven's Breath (The Women of Purgatory) by Tish Thawer