Read This Book Is Not Good For You Online

This Book Is Not Good For You This Book Is Not Good For You
Pseudonymous Bosch
简介

Between the pages of this book lies the secret to the best-tasting chocolate in all the world. I promise, your taste buds will tingle. Your palette will sing! Oh no, have I accidentally tempted you to read this book? I will warn you, however, the most delicious things are never good for you...and this story is particularly scrumptious!In this tooth-rotting adventure, Cass's mom has been kidnapped by the evil dessert chef and chocolatier, Senor Hugo! The ransom...the legendary tuning fork. Can Cass and Max-Ernest find the magical instrument before it's too late? Will they discover the evil secret ingredient to Senor Hugo's chocolate success?If you're tempted, take a taste, but just remember...this book is not good for you. 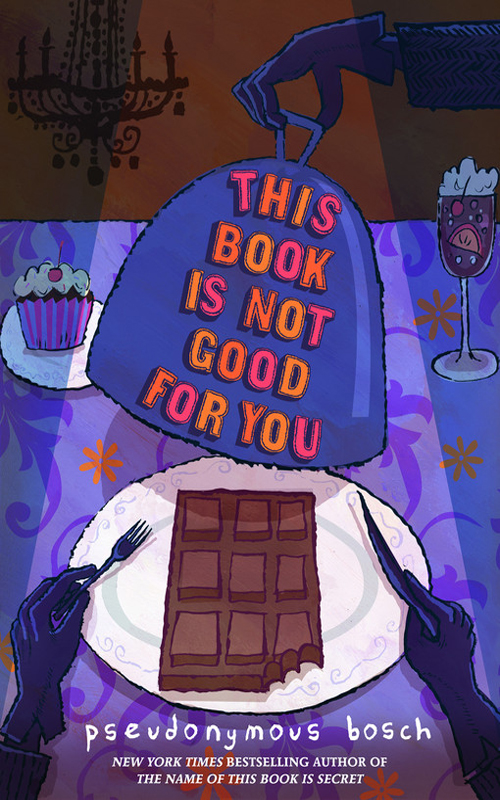 Little, Brown and Company is a division of Hachette Book Group, Inc.

The Little, Brown name and logo are trademarks of Hachette Book Group, Inc. 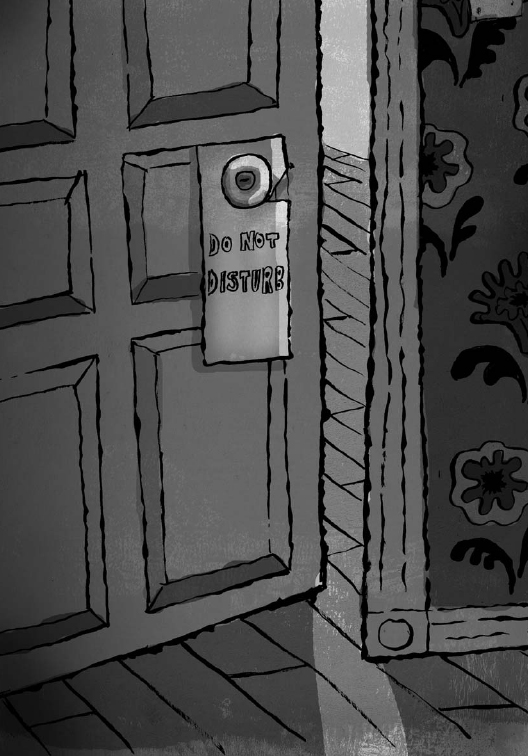 mmmmm… smoothly on the tongue… yet earthy underneath… note of… cinnamon and—or maybe licorice?… not too sweet… lovely must have another…

For a second, I thought it was—well, never mind what I thought.

The question is: what am I going to do with you?

Sorry, my mouth was full. What I was trying to say was: I’m not quite ready for you. I’m very busy. Didn’t you see the DO NOT DISTURB sign?

What am I doing? Something important. That’s what.

Well, if you must know, I’m eating chocolate. But it’s not like it sounds! Trust me. It’s work. Research.

This book is all about chocolate. And—ykuh wounbrldbnt wrannt—sorry, I couldn’t resist another bite—you wouldn’t want me to write about something I didn’t know about, would you?

What’s that? You wouldn’t expect anything else from me?

Great. Thanks for the vote of confidence.

Let me tell you something: I’m not the same scared writer I used to be, and I’m not going to take any guff from you. I have other readers now. Grateful readers. Readers who know how to treat an author.

Take this extra-large box of extra-dark, extra-expensive, extra-delicious chocolates that I’m eating right now. Not to toot my own horn but a fan sent it to me as a present.

For P.B.—the best writer in the world, said the note.

What? It must be a trick? Nobody would say that about me and mean it?

OK, out—now! There’s no way I’m going to write this book with you sitting there insulting me.

I’ll tell you what: on my desk, there’s a chapter I just finished. It’s supposed to come much later in the book, but you might as well read it now while I continue… researching.

It will be like a prologue, an amuse-bouche, if you will—something to tickle your palate before the real meal arrives. *

Speaking of meals, which chocolate shall I have next? The caramel nougat or the raspberry ganache…? 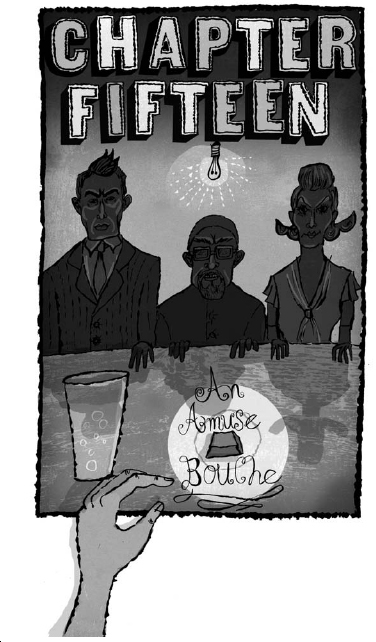 A bird poked his head through the iron bars and nudged the arm of the girl on the other side. The bird was bright green with a red chest, yellow crest, and big, begging eyes.

“Patience, my friend!” said the girl. “My gosh, you are a greedy bird!”

(In reality, she was speaking French and what she said was: “Patience, mon ami! Zut alors, tu es un oiseau avide!” But the French version is a little less polite.)

Laughing, the girl opened her hand and revealed a small broken piece of chocolate—the same color as her delicate skin.

The bird swallowed it whole, then looked at her beseechingly.

“Sorry, that’s all I could get today.”

The bird squawked—whether in thanks or in protest, it was hard to tell—and then flew away, his long tail waving in the wind.

“You should be bringing me food. I’m the one in the birdcage!” the girl called after him as he disappeared into the dense jungle.

Glum, she sat down on the pile of old newspapers that served as her bed—and as the only source of entertainment in her cement cell. The bird was a pest but his visits were the highlight of her day. There was nothing to look forward to now.

One of the guards, the large humorless woman named Daisy, stepped up to her cage. “They want you again.”

Already? Simone wondered. It had only been an hour since the last time.

They were waiting for her in the Tasting Room.

The three of them, as always, sitting in those tall silver chairs behind that long marble table. In their bright white lab coats. And bright white gloves.

They’d never introduced themselves, but she had names for them: The tan man with the silver hair, she called him the Doctor. The beautiful blond woman with the frozen smile, she was the Barbie Doll. And the blind man behind the dark sunglasses, he was the Pirate.

Only, weirdly, it was her judgment they were waiting for.

She sat down opposite them on the low stone bench. The one that made her feel about two feet tall.

Always the same routine. First, they made her drink a glass of water. Twice distilled water without any trace minerals, they’d explained. Absolutely tasteless. To cleanse her palate.

Then the Pirate placed in front of her a small square of chocolate on a plain white plate.

And then they waited in silence for her response.

They said she was a supertaster. Somebody with double the usual number of taste buds in her tongue. But she knew it was more than that. **

For as long as she remembered she’d been able to detect subtle differences in flavors.

Was the honey made from orange blossoms or clover? Clover. Blackberry or boysenberry? Gooseberry. Was that lemon thyme or lemon verbena? Neither, it was lemongrass.

She was like one of those virtuosos who can play an entire symphony by ear the first time they sit at a piano. She had the taste equivalent of perfect pitch.

Now, in this cold room so far from home, she looked down at the Palet d’Or. It was dark to the point of blackness, and it had a silky sheen.

Carefully, she nibbled off a corner. And closed her eyes.

But this was something else altogether. It was like ultra chocolate. The quintessence of chocolate.

It was the best thing she’d ever tasted.

Tears streamed down her face as she experienced a lifetime of emotions all at once.

The taste of the chocolate—the tastes, that is, because the chocolate tasted of so many things—took her back to her childhood. To her family’s old cacao farm in the rainforest.

In flashes, she remembered the gnarled roots of the cacao trees and the damp, fragrant earth.…

How happy she’d felt on the farm…! How safe…!

And then the crying as she was taken from her parents…

The gradual realization that she was a prisoner…

That her life was not her own…

“It’s working!” exulted the Barbie Doll. “Look at her face!”

“She does seem to be… reacting,” said the Doctor more cautiously. “Simone, can you tell us what you are tasting? What you are seeing?”

“Yes, tell us!” urged the Pirate, clenching his gloved fist. “Have I found my recipe at last? Is this my chocolate?”

Simone opened her mouth to respond but—

All her senses were gone.

She tried to scream but she made no sound.

What was happening to her?

What awful thing had she just eaten?