Read 150 Movies You Should See Before You Die Online

150 Movies You Should See Before You Die 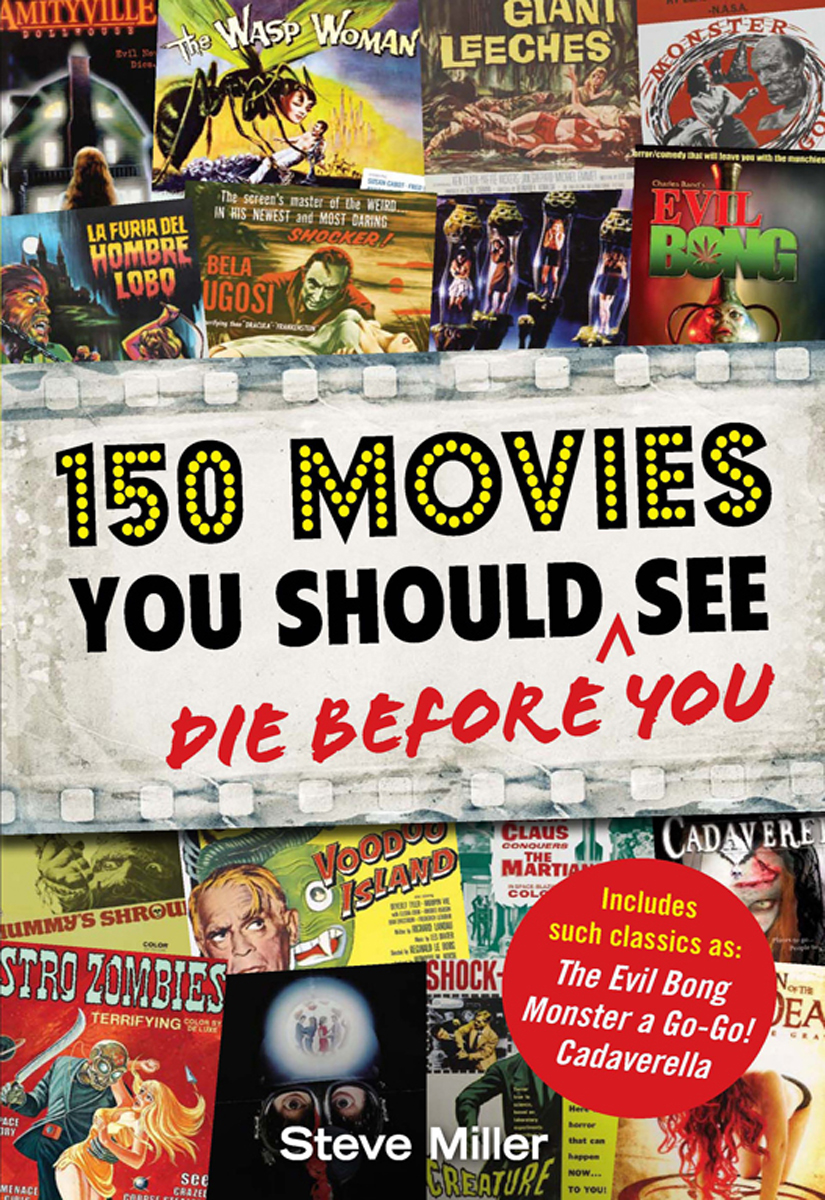 150 MOVIES
YOU SHOULD DIE BEFORE YOU SEE

Copyright © 2010 by F+W Media, Inc.
All rights reserved.
This book, or parts thereof, may not be reproduced in any
form without permission from the publisher; exceptions are
made for brief excerpts used in published reviews.

Printed in the United States of America.

Library of Congress Cataloging-in-Publication Data
is available from the publisher.

Many of the designations used by manufacturers and sellers to distinguish their product are claimed as trademarks. Where those designations appear in this book and Adams Media was aware of a trademark claim, the designations have been printed with initial capital letters.

This book is available at quantity discounts for bulk purchases.
For information, please call 1-800-289-0963.

I may be having fun at the expense of their movies in this book, but it wouldn't exist if not for some filmmakers who have made bad movies for which I have genuine affection. My deep gratitude for all the entertainment to Charles Band, Mario Bava, Uwe Boll, Roger Corman, Kerry Douglas Dye, John Johnson, Sam Katzman, Lloyd Kaufman, Henry Towers, Ted V. Mikels, Dan Wascavage, and Edward D. Wood, Jr.

I also want to extend a big thank you to my editor, Peter Archer. This would have been a very different book without his invaluable input.

To Dan, Lars, Jesper, Vibeke, Loie, Jeff, Michelle, Miranda, Greg, Shaun, and Kate — as well as anyone I may be forgetting — who, over the past thirty years, repeatedly sat down to watch bad movies with me. (And I offer apologies for the times I had to trick you.)

Exhibits in the Bad Movie Museum

Creature From the Black Lagoon (1954)

It Seemed Like a Good Idea at the Time

Kinda-Sorta Based on the Book

Mysteries of the Orient

From when I was in my early teens, about the time we were the first family in our neighborhood to have a VCR, I've had a strange fascination with what People of Taste call “bad movies.” Whether it's weak plots or just nonsensical storylines; whether it's acting on the level of a bad high school play; whether it's special effects created in someone's kitchen with a Mixmaster and a bottle of ketchup; whether it's technical incompetence on the part of some or all members of the crew; or whether it's a mind-shattering combination of all of the above, there is something magical about bad movies. Something that makes them worth the sometimes considerable effort to sit through.

After watching and reviewing thousands of movies that even the most charitable reviewer would describe as “pathetic,” I've concluded that the reason we keep coming back to bad movies and the people who make them — because, as you will see, there are filmmakers whose long lists of credits don't contain a single good movie — is because for every minute of film time that is completely unwatchable, there are ten that are full of creative insanity that the makers of mainstream movies wouldn't dare to put on screen.

We, the lovers of bad movies, dig through the piles of trash, looking for those shining gems of pure cinematic magic. We prefer that quest over the blandness and uniformity of the “good movie” and its adherence to standards determined by convention and critical fiat.

Despite the derogatory things I say about the films in this book, I have great respect for the men and women who created them. A lot of work goes into filming even the worst movies. Movie making is hard, time-consuming labor, no matter what role the professional plays in its creation. The act of finishing a film and getting it before an audience is worthy of respect — particularly in the fifties and sixties, when many of these movies were made, a time when movie-making was even more backbreaking than today.

Although the movies in this book are uniformly awful, I number some of them among my all-time favorites.
1941, The Black Cat, Dead Alive, Hideous
, and
Mask of Fu Manchu
are but a few of the dozen or so films in this book that I recommend to any-one who has trashy taste — like me. In fact, in spite of this book's title, I suspect that someone out there will find every one of these films a guilty pleasure. (Except, possibly, for the films discussed in Chapter 15. These movies were probably included in the CIA's arsenal of “harsh interrogation techniques.”)

So though my critical alarm bells go off when a bad movie hits the screen, I have to confess that often the film finds a visceral response. My respect for a movie doubles when the film is entertaining … even if that entertainment may be of a different kind than its creators intended.

In particular, I want to express special gratitude to the people who worked on more than one of the movies discussed in this book, be they filmmakers or actors. Often I seek out work by these people, no matter how bad their films are by critical standards.

If you want to share your opinion on a film discussed in this book, please visit my website at
www.moviesyoushouldnotsee.com
. I enjoy hearing what other aficionados of trash movies have to say about them, and even more I love recommendations for what I should see next.

I hope to get to know you all through the wonders of computer technology!