Read A Breath of Life Online

A Breath of Life 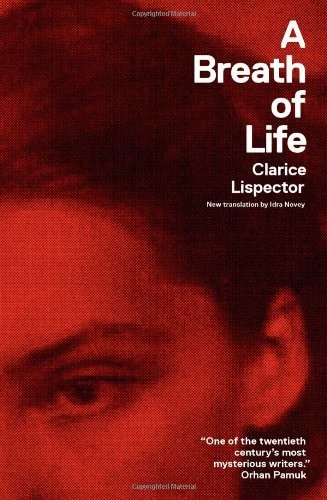 A BREATH OF LIFE
(PULSATIONS)

Translated from the Portuguese by Johnny Lorenz

Benjamin Moser & Pedro Almodóvar:
An Exchange on
A Breath of Life

A BREATH OF LIFE

THE
DAYDREAM
IS
WHAT
REALITY
IS

HOW
CAN
YOU
TRANSFORM
EVERYTHING
INTO
A
DAYDREAM
?

Benjamin Moser & Pedro Almodóvar:
An Exchange on “A Breath of Life”

Caetano Veloso has written to you about our project to translate Clarice Lispector into English and I would very much like for you to consider contributing an introduction.

When I saw
The Skin I Live In
I was struck by the similarities between the film and Clarice’s theme in this posthumous book, which has never before appeared in English. The title,
A Breath of Life
, refers to the creation, mystical or “Frankensteinian,” of one being by another. When I saw it I thought: Pedro Almodóvar will love Clarice. And Caetano thought the same.

Like Caetano, who discovered her at age 17, when he still lived in a small city in the interior of Bahia, I fell for Clarice when I was young, in a college Portuguese course in the United States. Ever since, I dreamed of making her better known outside Brazil.

Two years ago, I finally published a biography of Clarice Lispector,
Why This World
. Now, with these translations, we are taking the next step.

The biggest question that occurs to me as I read
A Breath of Life
is: Was Clarice, more or less dying as she wrote it, mad? Because at many points it reminds me of the diaries of Vaslav Nijinsky, which you surely know: a journey into madness.

But there is also, hidden within this book, a terrible story that I discovered when I was researching my biography. It was known that Clarice was born to Jewish parents in the Ukraine in 1920, and that the Lispectors had arrived as refugees in Brazil when she was still an infant.

What was not known, because of the shame that still predominates in many Jewish families, is that, in that period of war, starvation, and racial persecution, her mother had been raped in a pogrom by Russian soldiers, and that she had consequentially contracted syphilis, which was then incurable.

According to the folk superstitions of the remote area where they lived, a woman with syphilis could be cured by pregnancy. And so that is what her parents did.

The result of this attempt to save her mother was Clarice Lispector herself. For her mother, however, the pregnancy cured nothing. And Clarice, for the first nine years of her life, was forced to watch her mother agonizing, paralyzed, exiled, dying.

Feeling the guilt of having failed in her attempt to cure her mother, the girl started telling stories in which an angel, a saint, a god, came to cure her. These stories failed.

The tragedy is the origin of one of the twentieth century’s greatest writers. And until the very end of her life — until
A Breath of Life
— she never lost the hope of repairing the world through mystic means.

In this book she creates Angela because, as she says, she needs someone to save. But at the end of the book she knows that she has to let her die. And the little girl’s dream returns, literally, in the last pages she wrote.

Last night I had a dream within a dream. I dreamed that I was calmly watching actors working on a stage. And through a door that was not locked men came in with machine guns and killed all the actors. I began to cry: I didn’t want them to be dead. So the actors got up off the ground and said: we aren’t dead in real life, just as actors, the massacre was part of the show. Then I dreamed such a good dream: I dreamed this: in life we are actors in an absurd play written by an absurd God. We are all participants in this theater: in truth we never shall die when death happens. We only die as actors. Could that be eternity?

But here, too, she cannot let Angela die. She knows, as she says, that if Angela dies, so too will she. Instead of killing her, she imagines herself as a film director and lets her fade off into the distance.

So [her best friend recalled] we started making plans and talking about everything we would do in Paris. The taxi driver, poor thing, already tired from working all night long, timidly asked: “Can I go on the trip too?” And Clarice said: “Of course you can, and you can even bring your girlfriend.” He said: “My girlfriend is an old lady, seventy years old, and I don’t have any money.” Clarice answered: “She’s coming too. Let’s pretend you won the lottery.” When we got to the hospital, Clarice asked how much it was. Only twenty cruzeiros, and she gave him two hundred.

Needless to say, she never went to Paris: she died six weeks later.

I have followed your career since
Women on the Verge of a Nervous Breakdown
(I was twelve, I saw it in the “art” cinema in Houston, my hometown). And I’ve seen every movie since.

The people I love, in my experience, always end up loving one another. At least I hope that you too will fall for Clarice, even in this unfinished and hieratic book. In fact I have no doubt: it’s almost impossible for you not to.

If that’s the case, a word from you would help the great Clarice reach many more people. This is the most important project of translation into English of a Latin American author since the complete works of Jorge Luis Borges were published a decade ago.

Excuse this long letter: but I get excited when I talk about her.

As my assistant told you, I can’t write a prologue for
A Breath of Life
, the stupendous and highly original novel by Clarice Lispector, and not because I don’t like it: to the contrary. I have never written a prologue to a book, though I have often been asked to. Sometimes because the book didn’t interest me and sometimes because the book interested me too much, as is the case with
A Breath of Life
.

I have so much respect for great literature and, especially with books that excite me, I always feel I am not up the task, that a few words of mine wouldn’t help the book be better understood. I think a prologue ought to add something new to the work it precedes and I never feel I have anything to add. In this case I also simply lack the time.

This is a thrilling book to read, but it’s very difficult to write about it. Without wanting to compare my work to Lispector’s, I have heard on more than one occasion comments similar to your own about my last film from certain critics who liked it and didn’t want to revert the same old topics.

Speaking of
Breath
and
Skin
, I found a paragraph that defines transgenesis in an exquisite and precise way. “I want the colorful, confused and mysterious mixture of nature. All the plants and algae, bacteria, invertebrates, fish, amphibians, reptiles, birds, mammals concluding man with his secrets.” I can’t think of a more beautiful definition of transgenesis, though Lispector was thinking of something quite different. We are already publishing the screenplay of
The Skin I Live In
, and I’m going to suggest placing that quote at the beginning of the book.

The novel is full of memorable phrases about literary creation (“Writing is without warning”) and the passing of time (“you don’t start at the beginning, you start in the middle, you begin with the instant today”), the desperation and the multiplicity of the individual (“I live losing sight of myself. I need patience because I am many paths, including the fatal dead-end alley”), including the need to speak to oneself, the search for an interlocutor and finding it inside oneself (“the woman I invented because I needed a facsimile of dialogue”).

This book has a similar effect on me as the first novels I read by J. M. Coetzee. Each phrase accumulates such a quantity of meanings; it is so dense, rotund, and rich that I halt before it as before a wall. I like it very much but am not qualified to accompany a text of such magnitude. I think a writer would have to do it.

Many thanks for thinking of me. I hope we meet some day.

For Clarice Lispector, my friend,
A Breath of Life
would be her definitive book.

Begun in 1974 and finished in 1977, on the eve of her death, this book, so difficult for her to produce, was, in the words of Clarice, “written in agony,” for it was born from a painful impulse she was unable to contain. During this same period she was also writing
The Hour of the Star
, her last published novel.

For eight years I lived with Clarice Lispector, participating in her creative process. I wrote down her thoughts, typed her manuscripts and most of all shared in her moments of inspiration. As a result, she and her son Paulo entrusted me with the organization of the pages of
A Breath of Life
.

And so it was done.

And the LORD God formed man of the dust of the ground, and breathed into his nostrils the breath of life; and man became a living soul.

The dream is a mountain that thought must climb. There is no dream without thought. To play is to teach ideas."

A Breath of Life

"I want to write pure movement."

This is not a lament, it’s the cry of a bird of prey. An iridescent and restless bird. The kiss upon the dead face.

I write as if to save somebody’s life. Probably my own. Life is a kind of madness that death makes. Long live the dead because we live in them.

Suddenly things no longer need to make sense. I’m satisfied with being. Are you? Certainly you are. The meaninglessness of things makes me smile complacently. Everything surely must go on being what it is.

Today is a day of nothing. Today is down to the wire. Could there be a number that is nothing? that is less than zero? that begins where there is no beginning because it always was? and was before always? I tap into this vital absence and I’m a young man again, both contained and complete. Round without beginning or end, I am the point before the zero, before the period of the sentence. From zero to infinity I walk without stopping. But at the same time everything is so fleeting. I always was and just as quickly was no longer. The day runs along aimlessly outside and there are abysses of silence within me. The shadow of my soul is my body. My body is the shadow of my soul. This book is my shadow. Excuse me, may I pass by? I feel guilty when I don’t obey you. I am happy at the wrong moment. Unhappy when everyone’s dancing. I’ve heard that cripples rejoice just as I’ve heard that the blind can be glad. Because unhappy people make up for it somehow.

Vanishing Act by Liz Johnson
Shock Point by April Henry
Homicide My Own by Anne Argula
A Baby on Her Christmas List by Louisa George
I Wonder What Human Flesh Tastes Like by Isis, Justin
Lethal Legacy by Fairstein Linda
The Case of the Yellow Diamond by Carl Brookins
Vacations Can Be Murder: The Second Charlie Parker Mystery by Connie Shelton
Search and Rescue by Gail Anderson-Dargatz
A Knight's Vengeance by Catherine Kean