A Pour Way to Dye (Book 2 in the Soapmaking Mysteries) 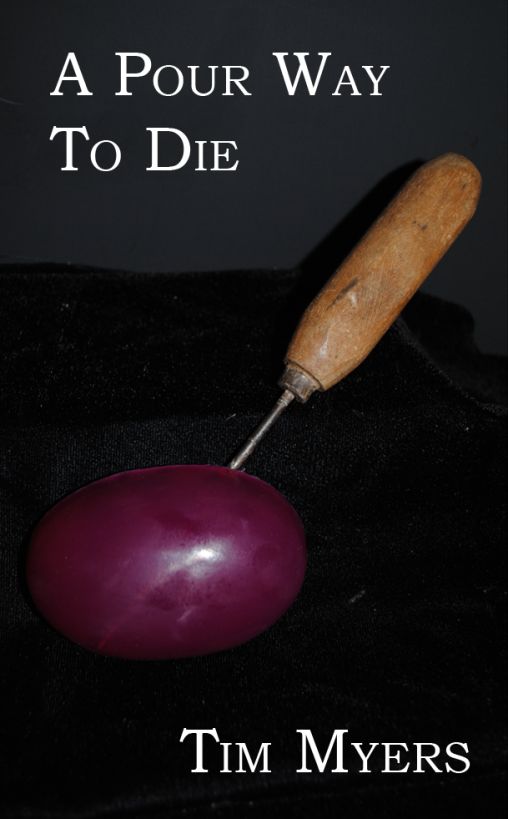 A POUR WAY TO DYE

Book 2 in the Soapmaking
mysteries

Praise for the Lighthouse
Mystery series by Tim Myers

“
A thoroughly delightful and
original series. Book me at Hatteras West any day”

—
Tamar Myers, author of Thou
Shalt Not Grill

“
Entertaining ... authentic
... fun ... a wonderful regional mystery that will have readers
rebooking for future stays at the Hatteras West Inn and
Lighthouse.”

“
Myers cultivates the North
Carolina scenery with aplomb and shows a flair for
character.”

“
Tim Myers proves that he is
no one-book wonder... A shrewdly crafted puzzle.”

Praise for the Candlemaking
Mystery series by Tim Myers

“
Excellent storytelling that
makes for a good reading experience…Myers is a talented writer who
deserves to hit the bestseller lists.”

---Carolyn Hart, author of the Death on
Demand series

“
An interesting mystery, a
large cast of characters, and an engaging amateur sleuth  make
this series a winner.”

--Carolyn Hart, Award winning author of Death
of the Party

“
Elizabeth Bright writes an
engaging and fast read and incorporates interesting information
about card making while solving the murders.”

The Candlemaking Mysteries
by Tim Myers

A Flicker Of Doubt

The Soapmaking Mysteries by
Tim Myers

A Pour Way To Dye

A Mold For Murder

The Cardmaking Mysteries by
Tim Myers written as Elizabeth Bright

A Pour Way to Dye

This ebook is licensed for your personal
enjoyment only. This ebook may not be re-sold or given away to
other people. If you would like to share this book with another
person, please purchase an additional copy for each person. If
you’re reading this book and did not purchase it, or it was not
purchased for your use only, then please return to Smashwords.com
and purchase your own copy. Thank you for respecting the hard work
of this author.

No part of this book may be reproduced,
scanned, or distributed in any printed or electronic form without
permission. Please do not participate in or encourage piracy of
copyrighted materials in violation of the author’s rights. This is
a work of fiction. Names, characters, places, and incidents either
are the product of the author’s imagination or are used
fictitiously, and any resemblance to actual persons, living or
dead, business establishments, events, or locales is entirely
coincidental.

As always, to Patty and Emily. My reasons
why.

A POUR WAY TO DYE

For a man named Joy, there was clearly none
left in his lifeless body. Lying on the floor near the tub—one arm
outstretched before him—he clutched a scented bar of soap in his
left hand. It wasn’t Dove or Lifebuoy or Dial, but a handcrafted
cleanser, wrapped with the label, Where There’s Soap, which was
made in the shop that abutted his jewelry store’s property. Though
it is true that more accidents happen in the bathroom than any
other room in the house, this was no accident. Someone had clubbed
him from behind with the iron bar from a towel rack and then left
him for dead.

After the attack, Joy had only a little life
remaining—not enough to call for help or even to linger more than a
few moments—so he had to act quickly while he still could. He
grabbed the only thing within reach that might help name his
killer, if only the police were smart enough to discover the clue
he was leaving behind.

I had to slam on my Miata’s brakes to keep
from plowing through a chain-link fence as I started to pull into
the back parking lot of my family’s soap factory and boutique,
Where There’s Soap. I wasn’t being reckless or driving impaired;
that fence hadn’t been there when I’d left the night before. I
somehow managed to stop before I rammed into the thing, but just
barely. As I shut off the engine, I tried to slow my pounding
heart. What kind of foolishness was this? Then I saw the sign wired
to the eight-foot-high fence. It told me everything I needed to
know. Earnest Joy was at it again, only this time he’d gone too
far.

My name is Benjamin Perkins, and my family
and I run the largest custom soapmaking production line and
boutique in our part of North Carolina. My three sisters teach most
of the classes and handle the customers in front, while my three
brothers run the production line in back. Our mother oversees us
all, with our grandfather popping in every now and then to add his
opinions to the mix. That leaves me the hardest job of all, in my
opinion. At thirty-three, I’m the family and business
troubleshooter. Whenever there’s a problem, it’s up to me to fix
it. And believe me, there’s always a problem. Most folks are
surprised when they find out a guy like me—six feet tall and 180
pounds—is a soapmaker by trade, but it’s the family business, and
like it or not, I’m usually right in the middle of everything going
on at Where There’s Soap. When I’m not trying to keep our little
world safe and sane, I teach a few soapmaking classes in the
classroom up front and even help my brothers on the production line
now and then. As the eldest of seven children, I stepped into my
father’s role the day he died, and I haven’t had a quiet moment to
myself since.

It appeared that today wasn’t going to offer
any tranquility either.

I tested the fence and found that it was
solid, its posts buried in the ancient blacktop surface of our lot.
I left the Miata where it was and started off on foot toward the
source of our trouble. In all honesty, I was too angry to drive,
and Earnest Joy’s jewelry store was close by, situated on land that
abutted ours. I took the sidewalk, never even thinking of cutting
across the grassy lawn between us. Earnest wouldn’t have allowed it
before, but now there was an even bigger reason besides him and his
fence. His son Andrew—a young man who had never shown a real
interest in anything in his life—had suddenly decided he wanted,
more than anything else in the world, to become a master gardener,
converting every square inch of green into growing something. As I
looked over his straggly crops, I realized that passion and
excellence don’t always go hand in hand. It appeared that as soon
as Andrew dug up a bit of dirt, he haphazardly threw a handful of
seeds into the ground and then started on a new section. I had to
give him credit for one thing. He’d plowed into the hobby with a
zeal that amazed me.

I wasn’t the least bit surprised to find
Earnest Joy waiting for me near the door inside his handcrafted
jewelry store when I walked up, though I could see from the sign
that he wasn’t due to open for another hour and a half. No doubt
he’d been there since dawn, eagerly anticipating another clash with
me and my family. I liked to think the Perkins clan had a “live and
let live” approach to life, but when it came to our back door
neighbor, I’m afraid our best intentions faltered now and then.
Earnest certainly didn’t make it any easier on us, constantly
goading and prodding us with backhanded compliments and disdainful
looks. Most of the time it felt like his motivation for aggravation
was pure sport alone, but this time he’d crossed the line. He’d
elevated our conflict from a brush war to an all-out attack.

Before I could say a word, I noticed that
another man was in the shop with him, lurking near the back with
his chair balanced on its back two legs, though with his bulk, I
thought it was a precarious way to sit. I’d seen him around
town—Harper’s Landing wasn’t all that big a place—but as far as I
knew, our paths had never crossed before. He sat there staring at
me, his pale moon face smiling with a picket fence grin. I shook my
head—dismissing his presence—and turned to Earnest Joy. If he
wanted an audience, that was fine with me.

“
Have you completely lost
your mind?” I asked, fighting to keep my voice below a bellowing
rage.

Joy said snidely, “Perkins, I’m afraid I’m
going to have to ask you to leave.” His gaze stayed on the ledger
he was pretending to study as he spoke, but I could see a smile
start to blossom on his face. “I’m not open to the public right
now,” he added, then he gestured to his friend. “This is a private
meeting we’re having right now, isn’t it, Ralph?”

The other man, testing the seams of his
flannel shirt and canvas pants with his immensity, said smugly,
“That’s right, no visitors allowed.”

“
You can’t be serious,” I
said as I stared at Joy, fighting to keep my temper in check.
Earnest was a heavyset man, though he looked absolutely lithe
compared to his friend Ralph. Joy sported a hairline that retreated
farther than the French Army and a scowl that appeared to be
permanently attached to his less-than-handsome mug.

He meant it, too. We’d been adversaries since
I was a kid, when one of my errant pitches to a brother had the
misfortune of crossing his property line while he was out
patrolling the grounds. He’d gleefully confiscated our ball,
refusing to give it back no matter how much we’d pled, and I’d had
an intense dislike for the man ever since.

My first reaction at the moment was to scream
at him about the fence he’d put up and marked as Joy Property, but
I knew that was his wildest desire. So, instead of shouting, I took
a few dozen deep breaths and looked around his shop until I could
say something below the decibel level of an angry chainsaw.
Earnest, along with his son and daughter’s help on occasion, ran a
shop stocked with jewelry they made themselves. While I’d never
cared for Earnest Joy, even I had to admit that he had a delicate
touch with silver and gold, marrying them to precious and
semiprecious stones with an artisan’s skill and a master’s touch.
There were pieces that incorporated gold and silver coins in their
design, and some that sparkled with small diamonds and emeralds. No
doubt his shop would have been better suited in a city bigger than
our small town, but from the look of prosperity around the place,
it appeared that he managed to do just fine in Harper’s
Landing.

I was still trying to keep my temper when
Earnest looked up from his ledger and stared directly at me, no
doubt wondering if I’d suddenly been struck mute. “If you’ve got
something to say, spit it out, boy. I don’t have all morning. I
know there’s got to be some reason you’re here so early.”

I suddenly realized that if I waited until my
blood pressure retreated to a normal level, I’d be standing there
for the rest of my life. Keeping my voice as calm as I could, I
said, “You know why I’m here. We need to talk about that fence.
What were you thinking when you had it put up? Were you drunk?”