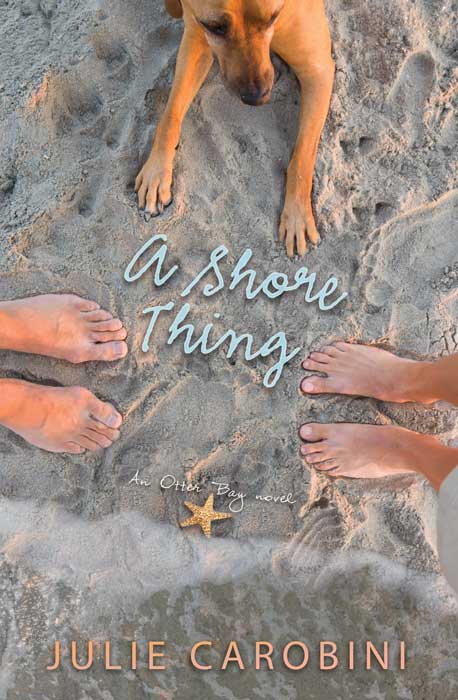 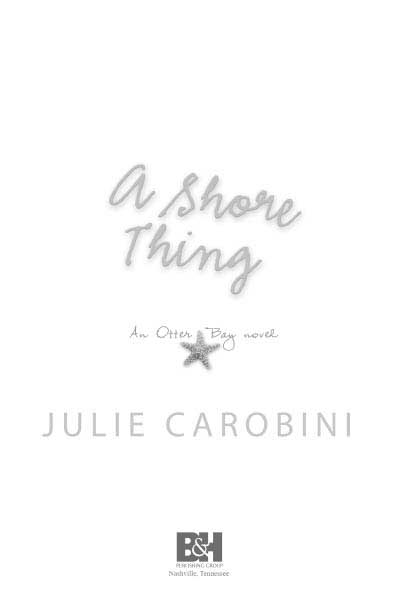 Publisher’s Note: This novel is a work of fiction. Names, characters, places, and incidents are either products of the author’s imagination or used fictitiously. All characters are fictional, and any similarity to people living or dead is purely coincidental.

For my children, Matthew, Angie, and Emma—

You are beautiful, each in your own way

Thank you, readers, for cheering me on to write seaside stories filled with faith, flip flops, and waves of grace. I have appreciated the letters, e-mails, and Facebook friendships immensely. I’d also like to give a shout out to those who willingly offered their time to help me in various ways while writing
A Shore Thing.

Tami Anderson, Sherrill Waters, and my husband, Dan, for reading, critiquing, and offering honest advice along the way. Appreciation also to Gary Anderson for the broken piano bench story!

Steve Laube for adeptly handling the business side of things. Karen Ball and Julie Gwinn at B&H Publishing Group—working with you both is a joy. Kudos also to Alton Gansky for your skillfulness and good humor in editing this manuscript.

My family—Dan, Matt, Angie, Emma, and Charlie the Dog, who must survive on mac ‘n’ cheese or something similar during writing season, along with my inattention—love you! My parents, Dan and Elaine Navarro, who deserve my forever gratitude for cheerleading me through life and storytelling.

A special, huge thank you goes to my architect brother, Daniel Navarro. You helped bring Gage to life and taught me so much about the journey of a hard-working, creative architect. Can’t thank you enough, little brother!

My Lord and Savior Jesus Christ without whom I’d be living one empty life. Thank you for filling me daily.

The rope in my hand resembled a noose. “Sorry, pal, but it was all I could find.”

The stray doggy with the dewdrop eyes found me earlier today as I jogged along the shores of Otter Bay while trying to shake off a tough weekend. I slipped the makeshift leash around his skinny neck. It was almost evening now and our trot through the woods on the way to my sister’s house for Sunday supper would serve as my halfhearted attempt to find this dog’s owner.

Hopefully, they’re long gone, because until this pup’s arrival, I hadn’t realized just how hollow my house with its reclaimed wood flooring and single occupant had begun to sound.

It wasn’t supposed to be this way. By my age—and my mother’s calculations—I should be living quite comfortably as a wife and mother and keeper of a house surrounded by a white picket fence. “Men aren’t attracted to tomboys, Callie,” my mother always said, clutching her heart and peering into the sky. She’d always been dramatic like that. Probably a leftover from her days in musical theater, an aspiration she eventually gave up to raise children.

If only I understood the rewards of marriage and motherhood. We had this conversation every year.

At thirty years old, though, I understood it fine. I just never seemed to have enough time nor decent prospects—at least not since
The One
got away three years ago—as my mother often put it. I tried never to think about that, but whenever one of my ex-boyfriend Justin’s road-hog trailer trucks sped by on the highway, advertising the biggest and best interior plant design company the West Coast had to offer . . . well, a twinge of anger attempted to coil itself around my lungs and squeeze until I could no longer breathe.

I bought my cottage with the proceeds from selling that business to him.

My family contended that my living against the grain had kept my life from progressing to the place they deemed appropriate. And after a day like today, maybe it was time to slow down, to figure out what Callie Duflay’s life really
should
look like, to finally admit that, yes, while I often saw the world through a different set of lenses than the rest of my siblings, it didn’t have to stay that way.

I stepped it up, realizing that if I was late for supper again, my sister Sheila was going to be ticked.

In the few short hours since he wriggled his way into my unconventional life, Doggy here had already soothed a couple of newly opened wounds, starting with the one that happened soon after I arrived at the camp on the hill for my job as weekend assistant camp director.

I arrived early Friday morning to what might have been a grim discovery: a mouse had wedged itself inside a box of colorful two-by-three cards used for the night game. These things happen when cookies from the evening snack are packed away with games.

Fortunately, though, the little guy still had breath to breathe. So I headed back outside, trudged up a hillside until my calves burned, released him from his makeshift cell, and scooted him in a direction away from camp. He moved slowly at first as if still gasping for life and then his speed quickened as if he knew that sustenance was only one foraging session away. Although it was early spring, the air still held a chill, especially in the shady spot where my feet stood planted. Patches of frost clung to the ground.

I spied a large, wayward plastic disc half-buried in a nest of pine needles and the sand slide the counselors had made the previous week. Positioning the pink disc at the top of the gangly patch, I folded myself inside its tight borders and let go. Like an oversized junior camper, I scraped and slid along the sand, picking up enough speed to skip across cool earth and flatten new growth before landing at the bottom of the hill in a laughing heap.

It never occurred to me that someone might be watching.

“Looks like someone has too much time on their hands.” Natalia Medina stood over me in a navy blue tailored suit, holding a clipboard and looking more like she was about to conduct a board meeting than visit camp.

I stood, wiped one hand down the side of my overalls, and reached out to the sole female board member of Pine Ridge Camp. “Hello, Natalia.” She shook my hand.

“I’m looking for Thomas. Have you seen him?” She glanced up the hill I’d just rocketed down. An amused smile tugged at her lips. “Then again, perhaps not.”

“Actually, Squid—I mean Tom—usually comes in by ten on Fridays. I had to, uh . . .” I turned toward the glistening hill not sure how a woman wearing red leather shoes would handle a mission of mercy for a mouse. “Retrieve a sand toy.”

She nodded. “I see that. Well, given your age now, I suppose it’s hardly easy to resist one last childhood fling.” Her shoulders lifted in a shrug and she laughed, but the squeak that escaped her mouth sounded more like a scoff.

I leaned my head to one side. “Excuse me?”

Natalia patted my shoulder. “I only meant that someone with as much education and years behind you will surely be moving on from here soon.” She wrinkled her nose and lowered her voice as if inviting me into her confidence. “Assistant camp director is merely a starter job, right?”

I leaned forward, my eyes fixed on hers. With one quick draw of my verbal sword, Natalia would find herself backed against the hard trunk of a nearby pine. But did I want to jeopardize a job that allowed me so much freedom? “Actually, I don’t plan to leave anytime soon, Natalia. I
love
that this job allows me to work with kids and to be outside so much. Besides, it gives me time to volunteer for some great causes during the week.” I put on a smile. “Not many people can say that.”

A pause dropped like a taut bubble between us. Natalia cleared her throat and her eyes flitted around. “Perhaps you have a point.” She took a step back. “Well, I won’t take up any more of your valuable time. Please let Thomas know that I was here to meet with him. Ask him to call my office, would you?”

She didn’t wait for my answer.

By Sunday, after two packed days of camp, I had seen more bloody noses and blistered toes than even the most experienced mother would be called upon to care for in any given weekend. And this made Squid’s invitation to join him in leading the kids down to the waters of Otter Bay all the more welcoming. Nothing erased a troubling memory quicker than that view, unspoiled by civilization, framed in the clearing.

“Forward, ho!” Squid led the charge through dense pine and fragrant eucalyptus trees. Far above us, clumps of Monarch butterflies still clung together as they hung from laden branches. It was going to be a late spring.

As I stepped up the pace, ten-year-old Xander marched alongside me and his fellow campers, his rigidity a protest against the apparent torture of a nature hike. “It’s a bunch of trees!”

His proclamation stirred within me the desire to prove him wrong, so I laughed and patted his back. “Just
wait,
mister. Once you get to where we’re going, you won’t ever want to leave.”

He crossed his arms. “Doubt that.”

Squid spun around and marched backward while still moving us forward. I took another look at our illustrious leader at the front of the pack. Charismatic and brilliant with the children, yet down-to-earth and humble, he defied my usual aversion to ordinary men. I’d been thinking twice about him lately.

His eyes connected with mine. “You pullin’ up the rear, Seabird?”

I sent him a smile from my place at the back of the group of mostly ten- and eleven-year-old campers. “I’m pullin’ it up!”

He nodded and winked at me, continuing to walk backward. “Watchin’ for escapees?”

I tossed Squid a playful salute. “That I am.” At about that spot the campers, mostly boys, often became distracted by the meandering stream that wiggled its way through this land. Dreams of gathering sticks and creating dams danced through their minds.

Dead Girls Don't Cry by Casey Wyatt
The Chilling Spree by LS Sygnet
Murder at the Brightwell: A Mystery by Ashley Weaver
The Walking Stick by Winston Graham
Before the Rain by JoAnne Kenrick
Irish Rebel by Nora Roberts
The Bathory Curse by Renee Lake
Underground Vampire by Lee, David
Corporate A$$ by Sandi Lynn
Warlords Rising by Honor Raconteur