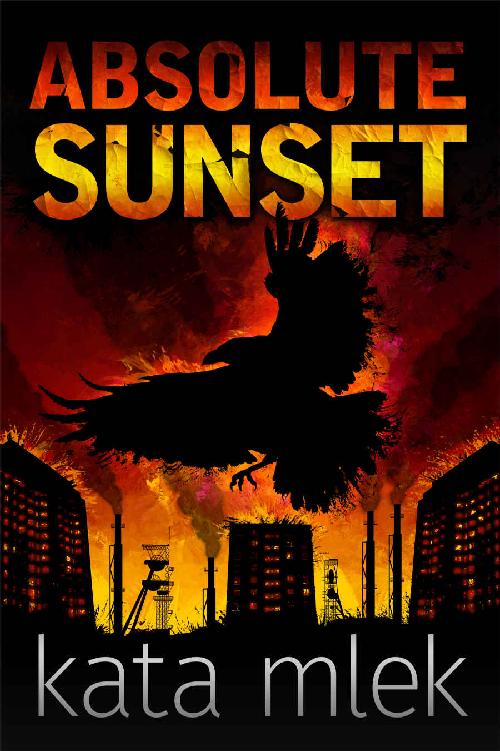 “Good evening.” The raven bowed politely. His black eye glittered like a lump of coal, as sorrowful and barren as the slag heap outside a mine.

“Good evening!” Hanka answered, equally politely. She sat down and smoothed the collar of her pyjamas—pink, with broderie anglaise. The holes, hemmed with thick thread, formed a nice, flowery pattern. It was unusual and much too elegant for pyjamas.

“How’re things going?” the bird asked chattily, taking a few steps along the bed frame. He held it tightly to keep from falling, scratching the pinewood a bit with his claws.

“Okay, nothing special,” Hanka sniffed, putting a small pillow on her head. Perched there, it resembled the pointed hat of a clown puppet.

“Oh well, life, the usual,” the raven said, making meaningless small talk for no reason that Hanka could see. He scraped his bill against the edge of the headboard several times, then jumped down onto the duvet, flapping his wings to keep his balance on the bumps as he came closer to Hanka. He jumped up to her shoulder and rooted in her hair with his bill. Finding an elastic band, he caught it firmly and pulled it from her ponytail. He liked hair accessories, especially colourful hair bands.

For a moment he was silent, busily tearing the rubber to pieces. When he finished, he raked up the fragments with his claws and jumped back to the headboard. He took a few steps to the left and a few to the right. Then he shook his head and stretched his wings wide, so that the feathers spread, forming a web. He stood extended like that for a moment, then abruptly snapped back into his usual pose with a flap.

“So, what? Shall we peck?” he asked eventually.

“No, please, don’t peck at me,” Hanka begged. “My nails are clean!” she stretched out her hand as proof.

“I washed them yesterday.”

“Nothing to be pecked up?”

“Absolutely nothing!” Hanka rested her hand on her heart.

“Then shall we take wing?” the bird asked.

And they did. They flew for a long time, so long that Hanka became cold, her back covered with goose pimples. She began to sneeze. Finally they saw water below.

“We’ll stop here,” said the raven, descending. Hanka followed as if she were attached to him by an invisible leash.

The bird landed by the side of a small decorative pool that looked as if it might be home to koi. It was rectangular, with walls that were slippery with algae and rough with barnacles. Here and there, the white tiles glistered in the cloudy water. Hanka didn’t like it at all.

“I want to fly farther!” she said, going into a sulk and stamping her bare feet.

“It’s not your decision,” the bird said, cutting off her protests. He flapped his wings and took to the air briefly, pecking her firmly on the head. A bead of blood appeared in her hair. Hanka understood: no “buts.”

She sat down beside the pool. She felt like crying. The place where the bird had pecked her smarted, and she bent over the mercury surface to see whether the wound was still bleeding. The sky was reflected in the water as if it were a mirror.

In spite of the shimmer, she glimpsed fish near the bottom of the pool. They were as large as burdock leaves and moved slowly, arching their bodies. Their scales gleamed in the sun.

“Oh, those are rays!” She was delighted at the sight and forgot about the peck on her head. “Stingrays, in fact. I saw some once on TV. Stingrays!” she announced proudly, and the raven nodded.

“Right,” he confirmed, dipping his bill beneath the surface of the water to drink.

“Agata will never believe me if I tell her!” Hanka leapt up and ran along the edge of the pool. “Real stingrays!” she crowed. The fish mostly milled around in the depths, once in a while sneaking up to a point just under the surface.

“Would you like to touch them?” the bird asked politely, even gently. Hanka went on the alert. The ingratiating tone in his voice was usually a bad omen.

“No, it’s dangerous!” she jumped away from the edge and wrapped her arms around herself. “Do you see those spines?” she pointed at the ribbon-like tail of a ray swimming nearby. “Those are no decoration, they’re a deadly weapon, venomous. The poison kills slowly and painfully. That’s what they said on TV, on the Discovery channel.”

“I’m afraid that you have to face the risk, my dear,” the raven said, suddenly changing tone. “You must catch them!”

“How?” Hanka looked around for a javelin or a trident, but saw nothing at all. Emptiness surrounded her. Not a desert, just the lack of anything.
How am I supposed to catch the rays with nothing?
she wondered. The raven, however, wasn’t bothered by the lack of equipment.

“You will catch them by hand. There’s an old fisherman’s technique called noodling,” he suggested. “Put your hand in the water. They like hands. A ray will grab your fingers, and then you pull your hand out and the ray comes with it. Go on!” The bird hissed like a snake and puffed up his feathers.

For a moment Hanka felt defiance rising up in her. She wanted to grab that wispy neck and bend it like a straw. The delicate spine of the bird would snap and she would have a nice, satisfying corpse instead of the raven. The impulse disappeared almost immediately, though. She wasn’t supposed to disobey. The choice was obvious: fish or be pecked. Not an ordinary peck, like when he cleaned her, but something serious: drawing blood, down to the bone. Just imagining it, Hanka got so scared that she momentarily needed to pee. It would be better to take her chances with the rays.

She sighed heavily and rolled her sleeves up to her shoulders. Her messy hair tickled her face as she kneeled and leaned toward the water. She brushed it away with her shoulder and put her hand into the pool cautiously—at first just a little, then up to the elbow. The water was tepid, neither cold nor warm. Strange. It horrified Hanka even more than icy cold or boiling heat would have done.

The fish spotted her immediately. They began to circulate more and more quickly, rising from the bottom toward the bait. Careful but greedy, they came closer and closer. She could see their bulging eyes, watery and slimy, like egg white. Once in a while a pale belly would flash past. Hanka began to cry.

The first stingray’s firm bite drew blood from her hand. Red rings dispersed in the water and after a while another fish came, attracted by the meaty smell. Hanka screamed and tore her hand out of water. But the ray didn’t let go, holding on grimly with sharp, hooked teeth. Still attached, it flailed in the air above her head, only letting go when Hanka slapped it against the edge of the pool. For a moment the ray flapped against the flagstones, then finally flopped over and lay still, reminding Hanka of a wet jelly ear mushroom. She vomited on a nearby bush.

“Well, well!” the raven cawed, jumping toward the dead stingray. He pecked out the fishy eyes and gobbled them down with gusto. The only other treats he consumed with such relish were the bone-dry scabs that he peeled back from Hanka’s pale calves and the dirt from under her nails. She watched him, disgusted, clenching her wrist. The blood was clotting slowly. The raven pecked at a little bit of the vomit and shook himself in distaste. It didn’t appeal to him.

“Is that enough?” Hanka asked, hoping the bird was full.

Hanka eventually caught four more fish, the third one gnawing a fair bit on her forearm. But the bird was still unsatisfied.

“More, more!” he cawed and wheezed, pecking at Hanka’s ankles, and she went back to catching the fish. The raven promised that when he was full he’d stop stabbing at her and they would go home.

The next fish struck the moment she dipped her fingers into the water.

“Ouch!” Hanka cried when she felt the teeth of the stingray cut her to the bone.

She immediately tried to get up and drag the fish ashore, but the ray was huge and held powerfully to her hand. Hanka couldn’t even stand up. Unlike the other fish, this one refused to give up and let her go. Instead, it began to drag her into the water. Dangling its tail and beating its fins, it pulled Hanka toward the pool.

“Help me!” she cried, but the raven watched indifferently. Hanka tried to yank herself backward, but she slipped and tumbled into the swimming pool.

Water immediately flooded her lungs and the pressure in her head was overwhelming, but at least it was easier to fight the stingray once she was in the pool. Hanka kicked it firmly and the fish let her hand go. She managed to surface for a second.