Read After Midnight in the Garden of Good and Evil Online

After Midnight in the Garden of Good and Evil After Midnight in the Garden of Good and Evil

All rights reserved. No part of this book may be used or reproduced in any form or by any electronic or mechanical means, including information storage and retrieval systems, without permission in writing from the publisher, except by a reviewer who may quote brief passages in a review.

Chapter 2: Most Likely to Succeed

Chapter 5: Things That Go Bump in the Night

Chapter 15: Some Observations on Danny’s Death

A decade ago, I abandoned hectic, impersonal, traffic-choked Washington, D.C., and embraced sunny, serene Savannah. As the executive editor of Court TV’s Crime Library website, I had the luxury of working anywhere I could get a good Internet and cell phone connection, so I chose the quiet calm of semitropical Savannah. 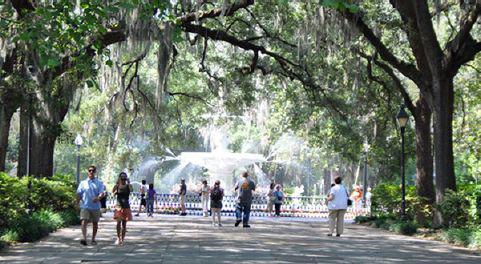 Savannah is a truly lovely city where atmosphere hangs as heavy as the Spanish moss on the giant live oak trees. A stroll through the elegant, seductively beautiful historic district, with its spacious porches, walled gardens and intricate ironwork, is a glimpse of a treasured past, now lovingly restored. But the city is so much more than an antebellum grand dame. It is a unique state of mind: Discreetly scandalous, insular, stubbornly resistant to change, and resplendent with eccentric charm and perfect manners.

The grid design of Savannah was planned by General Oglethorpe in 1733, when the city was founded. Every few blocks in the historic district there is a shaded park-like square with huge oak trees, gardens, and monuments; each square is a quiet leafy oasis.

Savannah’s Rosemary Daniell aptly described the special character of her city: “Despite this city’s pastel beauty, it also has a dark underside. Within its hothouse atmosphere, the present runs concurrently with the past; events that happened decades before are discussed as though they happened yesterday, including a number of scenes of sex and violence extreme enough to rival any dreamed up by Tennessee Williams.”

After living here for a few months, I found myself fascinated by one of the city’s most memorable characters, Jim Williams. Like millions of other people, I then read John Berendt’s runaway bestseller,
Midnight in the Garden of Good and Evil
, and watched Clint Eastwood’s movie starring Kevin Spacey as Jim Williams and Jude Law as Danny Hansford, the lover that Williams shot.

As a publisher of hundreds of crime stories, the Jim Williams case, with its four separate murder trials, struck me as quite unique. Imagine spending the better part of a decade and much of your wealth defending yourself in four separate trials, punctuated by a two-year stint in a seriously substandard county jail.

I wanted to get to the heart of this very bizarre case. It called out to my investigative instincts, which meant that I needed to understand Jim Williams and Savannah a great deal more than I did after reading Berendt’s book and seeing Eastwood’s movie. I began a series of some 40-plus interviews, starting with a veteran Savannah Morning News reporter who covered the Williams trials and was kind enough to let me look through the newspaper’s archives. He also gave me a list of people he thought would be good to interview. Each person I talked to expanded my list of additional people to contact. The list was varied and ranged from socially prominent Savannah “bluebloods” to antique dealers, drag queens, hairdressers, photographers, bartenders and others of differing layers of society and backgrounds who had rubbed elbows with Jim Williams.

I discovered a charismatic and multifaceted man with astonishing talents and long-lasting contributions to the restoration of the historic city of Savannah. However, as a part of this complexity, I also found a man who indulged in clearly unethical and illegal activities that could have put him behind bars well before he shot Danny Hansford.

What emerged is the story of a man to whom the city of Savannah owes an enormous debt. It is the account of a highly talented artist and entrepreneur who had enormous passion for the arts and dedicated his career to saving many of the grand old houses of Savannah from the wrecking ball. Surprisingly, it is also the tale of an often-arrogant man with a shocking predatory streak who deceived and exploited people at every level of society. Ironically, the intersection of these conflicting currents in Jim Williams’ personality gave birth to Williams’ greatest contributions to Savannah: The fallout of Danny Hansford’s shooting and the subsequent trials, John Berendt’s bestselling book and Clint Eastwood’s movie put Savannah squarely on the tourist circuit, generating millions of dollars of revenue, which flowed into the city for more than a decade and, most likely, will continue to do so well into the future.

I invite you to come along with me into the very fascinating and complicated world of Jim Williams.

Chapter 2: Most Likely to Succeed

Some have characterized Jim Williams’ life as a Horatio Alger story. Not so, says Kenneth Worthy II, an antiques dealer and friend of Williams. According to Kenneth, Jim’s parents were never poor. They weren’t cash-rich, but they were quality people with decades of good breeding. Jim personally enjoyed tracing and writing about his family’s English heritage and its journey in the New World from Boston to central Georgia. They were a family of prosperous farmers.

James Arthur Williams was born December 11, 1930, in Gordon, a small mining and farming town east of Macon in rural Georgia. His father was a barber and his mother, Blanche Brooks Williams, was a secretary for a local kaolin mining company. Jim’s thick dark hair and good looks were a gift from his rakishly handsome father. He had one sibling, a younger sister, Dorothy, whom he nicknamed D.O., which was short for Dorothy Ollie.

In 1983, Jim wrote fondly about an idyllic childhood in a close-knit family of grandparents, uncles and aunts, who frequently got together at his grandparents’ farm at Turkey Creek, some 18 miles from Gordon. Ultimately, his father and mother divorced and his father remarried, but his father and his new wife lived in close proximity to the children. A number of Jim’s writings about the history of his family, his early interest in saving disappearing Georgia architecture, and stories about restoring homes in Savannah and South Carolina are captured in
Savannah’s Jim Williams and His Southern Houses
by his sister, Dr. Dorothy Williams Kingery.

The entrepreneurial spirit was strong in Jim even as a youngster. Worthy told me that even at the age of 14, Jim was buying and selling antiques he thought were valuable or could expand his knowledge. Jim’s strong business sense and work ethic so impressed his school principal that once he let the teenager out of school to close a transaction. To encourage Jim’s love of wooden furniture, his father built him a wood shop, which is still standing in an old tobacco barn, according to Worthy.

From his youth onward, Jim had a deep love and respect for history and its survivors, antique pottery and furniture. It greatly pained him to see the destruction of so many fine old rural houses as enormous areas were cleared to plant pine trees for the pulp and paper industry. Later, this early fascination with history expanded beyond what he saw and found in central Georgia, even beyond colonial America, to the antique treasures of Europe and Asia that he would ultimately possess.

First, he had to go to college to get the credentials he needed to become a credible architectural preservationist. With the help of his mother’s salary, he was able to enroll at the Ringling College of Art and Design in Sarasota, Florida, to study interior design. The normal program for an interior design certificate was three years, but he only attended for two, from August 1948 to May 1950. It’s possible that he didn’t go for the third year because of the Korean War and the increasing need for young men to go to Korea and fight the Communists. Jim joined the USAF, which was an alternative to being drafted into the Army.

The Days of Redemption by Shelley Shepard Gray
Pursuit of the Zodiacs by Walsh, Nathan
Abigail: Through the Looking Glass by Rachel Elliot
Hoodwinked by Diana Palmer
Screwed by Laurie Plissner
The Undertaker's Daughter by Kate Mayfield
Some Like It Hot by Susan Andersen
The Curse of the Ancient Emerald by Franklin W. Dixon
I Brake For Bad Boys by Foster, Lori
The Trust by Tom Dolby