Agatha H. And the Clockwork Princess 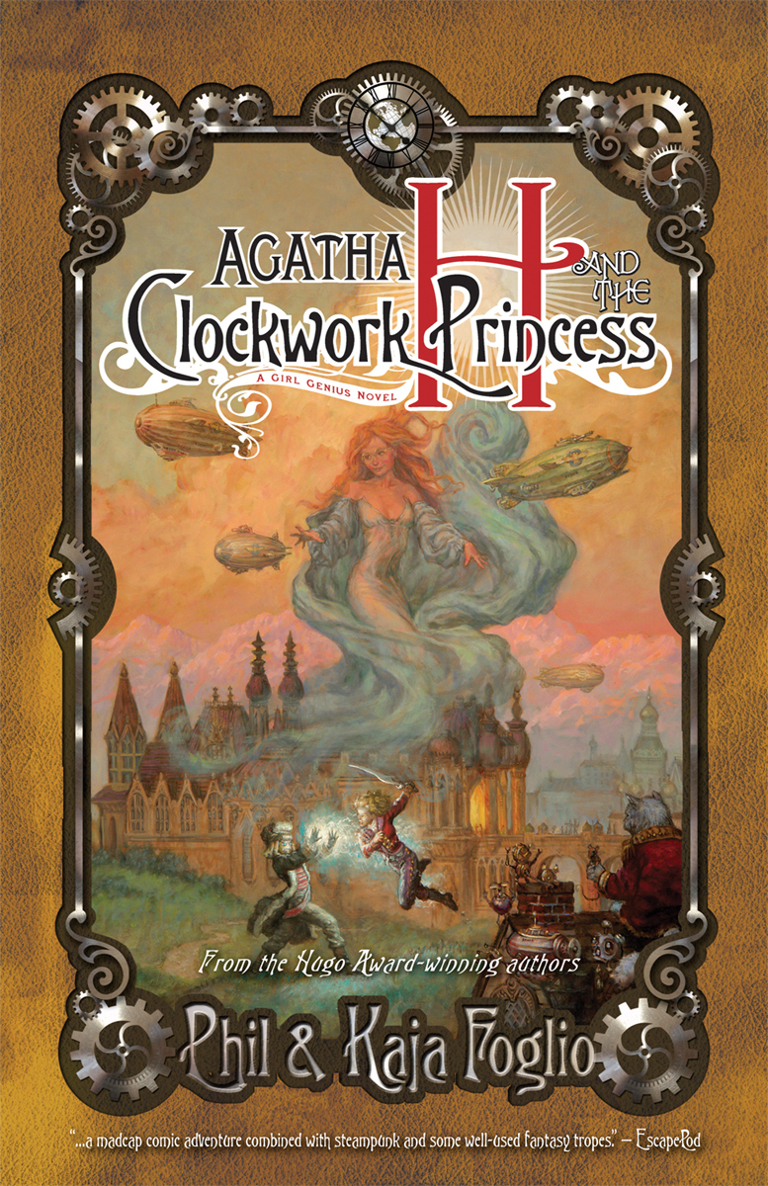 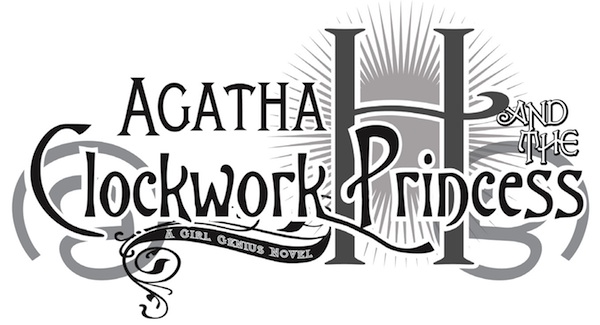 Other books by Phil and Kaja Foglio:

Agatha H and the Airship City

Volume 4: Agatha Heterodyne and the Circus of Dreams

Volume 7: Agatha Heterodyne and the Voice of the Castle

Volume 8: Agatha Heterodyne and the Chapel of Bones

Volume 9: Agatha Heterodyne and the Heirs of the Storm

Other books and graphic novels by Phil Foglio:

Agatha H. and the Clockwork Princess

This edition of
Agatha H. and the Clockwork Princess

The ongoing adventures of Agatha Heterodyne can be found online, where they are updated every Monday, Wednesday & Friday at www.girlgeniusonline.com.

Please visit us on the web at

T
he sun had set, the sideshows had closed, and now the crowd waited expectantly. The wooden stage with its heavy fabric hangings was dark, but from behind the curtain, lights flickered. Squeaking, clanking, and slow, rhythmic thumps could be heard.

Suddenly, with a roar, a great plume of steam erupted upwards. Lights set high on poles flared to a golden brilliance. The curtain itself vanished in a ball of flame, through which strode Master Payne, unscathed. On the backdrop behind him could be seen the shadows of a great set of gears, slowly turning.

The circus master raised his hands with a flourish, and a swarm of electric blue lines burst to life, glowing in the empty air above him. They looped and swirled in intricate patterns, writhing like flying serpents.

Payne’s voice boomed over the crowd, silencing the gasps and squeals erupting from the more excitable members of the audience.

“Welcome ladies and gentlemen—to a show like no other! It is true that we bring you the usual amusements, sleight of hand, thrills, jokes both cheap and witty! Ah, but these can be had from any ragtag troupe or two-penny dreadful, and I can see that you are an audience that demands more!
And we shall provide it!”

Another small explosion punctuated this speech, and easily half the audience shrieked as the surrounding light poles bowed gracefully toward them. Payne produced a glowing orange whip from within his voluminous coat and whirled it about his head before lashing out. After three explosive cracks, the poles flinched, then hastily straightened back up. Payne tossed the whip into the air—where it vanished with a bang.

“For tonight—” he roared, “we bring you a story of The Heterodynes! A story of brave heroes! Dastardly villains! Monsters both human and non! All set against a background of blood and thunder, tragedy and subterfuge, revelations and true love, laughter and tears, noble sacrifice and base betrayal, science and magic!”

The lights went out. Before the audience could panic, Payne reappeared, floating several meters above the ground and glowing brilliantly. He spread his hands and the lights came up, revealing the stage, now filled with fantastically costumed characters arranged in a magnificent tableau.

“For before you tonight is that glittering company known throughout the World—and beyond!—
as Master Payne’s Circus of Adventure!”

TWO HUNDRED AND SIXTEEN YEARS AGO

A
ndronicus Valois, Leader of the Coalition, Savior of Europa, known to the people as The Storm King, rested his chin upon his folded arms, leaned against the chilly stone battlements of Sturmhalten Castle and allowed himself a moment of loathing.

He loathed this cold, miserable mountain air, as opposed to his beloved Provance.

He loathed this raw pile of rock he’d had to hastily erect as his base of operations. It was hard and sharp, so unlike The Palace of Enlightenment he’d built over the last eight years, with its magnificent gardens and its ten thousand windows.

He loathed the mud and the grime and the blood and the smoke he’d lived with for the last three years. At night he dreamed of the Grotto of Ruby Pools where he’d had his last decent bath before he rode out.

He loathed this… well, to be honest, he actually preferred the clothing. The simple linen shirt and leather pants were ever so much more comfortable than the traditional royal regalia, what with its starched collars and multiple layers of waistcoats. It had been a revelation the first time he’d been able to remove his trousers without having to start unbuttoning himself a half an hour previously.

He sighed. A trap of his own making, that. If he was to keep his courtiers and their pet monsters preoccupied with harmless trivialities like fashion, than he had to be willing to be the exemplar they tried to imitate.

He thought about it, and decided that on the whole, he’d wear the damned clothing in exchange for peace.

He would have to do something about those trouser buttons though.

On the eastern plain below, he could see the assembled forces of the Heterodyne. Now them, he could loath without reservation. In the dim, pre-dawn light, several thousand campfires sparkled off of armor, weapons and engines of war.

Suddenly, one of the Heterodyne’s great war mammoths shrieked, its call reverberating between the mountain peaks. That would probably set the rest of them off.

It was said that one of the Heterodyne’s allies was trying to breed the beasts down to the size where they could be ridden like horses. An intriguing thought.

Sure enough, several dozen of the brutes began screaming. Andronicus wondered if it was true that the things really were part rooster. Well, it’s not like anyone in either camp was sleeping.

Even now various units of the Heterodyne’s armies were performing some odd form of close order drill, and the great furnaces and alchemical pavilions were still roaring and sparking, sending up billows of sickeningly sour smoke.

Some would consider that a bad sign, since the two sides were supposed to formally sign a treaty declaring an end to the fighting this day. But, ever since the Thinkomancer Bludtharst Heterodyne and his army of monstrosities had boiled up out of the East, he had played a heavy-handed game, psychologically. He relied on fear and the stories of atrocities he’d visited upon those who had dared to defy him to weaken his enemy’s resolve. Often to good effect, although this time, he had overplayed his hand.

The ruined ground between the Heterodyne’s camp and the castle walls showed ample evidence of the last few years of fighting. Craters, torn earth, and the twisted remains of destroyed engines littered the ground. When the horns announced the dawn and twilight cessation of battle, clearing them had been deemed unimportant compared to removing the dead and the wounded.

Even that seemingly obvious courtesy had been hard fought for. The Coalition had learned the hard way that you didn’t allow The Heterodyne to collect your dead. Towards the end, the battlefields had been all but swept. Even so, Valois noted that there was evidently still sufficient material to draw the interest of a vast flock of ravens, which covered the battlefield like a dark blanket, feeding.

Without conscious effort, he again analyzed the all-too-familiar terrain as well as the size of the forces before him—until, with an impatient shake of his head, he dismissed the calculations. After today, he’d no longer need them.

He allowed himself a small smile. Oh, no doubt, there’d be…difficulties. There always were with alliance marriages, and the Heterodynes had been unchecked for centuries, rampaging over much of Eastern Europa. He suspected they would not knuckle under smoothly.

The problem had been he had been a bit too successful in his campaign to domesticate the Thinkomancers of Western Europa. As a result of his efforts, everyone had known that a relatively cushy position for them and their patrons could be easily found at the Palace of Enlightenment, and they had flocked to him.

It had even been easy finding ways to keep them busy. Building roads and ports, designing sanitation and communication systems sounded deadly dull, but when presented in the right spirit of competition, and lavishly rewarded for success, the results were amazing.

Of course there was the expected percentage of grotesque errors of judgment, but they were usually put to good use, just not as they were envisioned.

A good system. But it had never been designed for the Heterodyne. He didn’t want trinkets, respect, and a fancy title, he was already a ruler of his own empire.

He didn’t want to just conquer the neighboring village, he wanted to conquer
everything
, and then dance on the bones. He was bad for business.

But the Heterodynes had done too good a job of letting people know just how terrible they were. Once it was obvious that their armies were crossing the Carpathian Mountains en masse, it had been relatively easy to assemble forces to fight them. The trick had been convincing the fat merchants in Brussels and Amsterdam, who thought they had all of Western Europa to hide behind, that they were in more danger than they dreamed.

Tricky, but displaying a few of Bludtharst Heterodyne’s captured troops had been an exciting and effective visual aid, especially when they had “accidently” escaped, and torched a few warehouses before they were taken down.

After that, the governments, and even more importantly, the great financial houses of the West, had given their support. With their backing, he’d been able to gather almost every fighter between here and the Atlantic, as well as the madboys they controlled.

Thus, even the Heterodynes, after throwing everything they had for over two years against the fortress Andronicus had ordered built here in Balan’s Gap, had realized that they could not win.

It had taken another year of negotiation, punctuated with assorted treachery and attacks of opportunity of course, but those had been expected, and Sturmhalten had held firm. So had Valois, who had not risen to the bait and tried to counter-attack.

He snorted in amusement, certainly the final terms were ones he had never dreamed of when he had first sat across from the Heterodynes’ negotiators, but the enemy was not the only one to grasp an opportunity.

The particular opportunity he had in mind was Euphrosynia, the beautiful daughter of Clemethious Heterodyne, and Bludtharst’s own sister.

Andronicus had first seen her by accident at an early parlay meeting. He had been struck by her appearance and her obvious intelligence even before he had known who she was.

In the year since then, the two had carried on a covert correspondence, aided by discreet diplomats. As a result, when Valois had added the taking of Euphrosynia in marriage as the final part of the treaty, he had been confident that she would come willingly.

Oh, there had been screams of rage from her father, of course, accompanied by a brief rain of burning tar. Apparently the girl had been promised to one of the Heterodyne’s allies, and he didn’t have many to spare.

But eventually the Heterodynes had relented, old Clemethius gave his blessing, and the treaty was approved.

And today was the day of the wedding, at which the Treaty of Sturmhalten would be signed, formally ending the conflict, and everybody could go home in time for the spring planting.