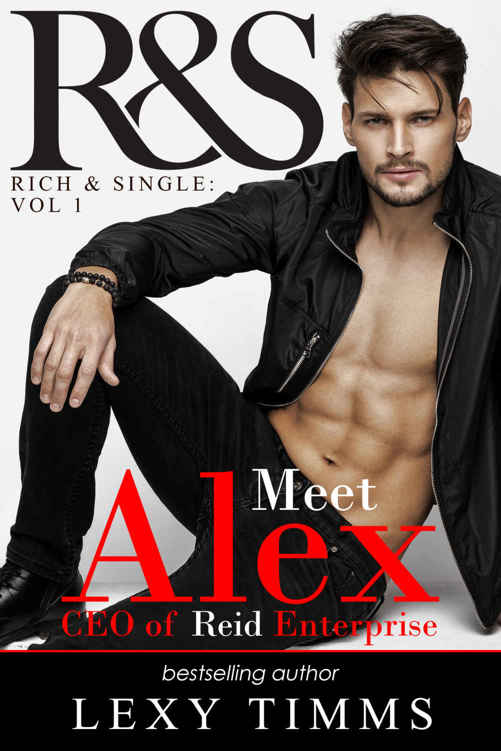 All rights reserved. No part of this publication may be reproduced, stored in or introduced into a retrieval system, or transmitted, in any form, or by any means (electronic, mechanical, photocopying, recording, or otherwise) without the prior written permission of both the copyright owner and the above publisher of this book.

This is a work of fiction. Names, characters, places, brands, media, and incidents are either the product of the author’s imagination or are used fictitiously. Any resemblance to an actual person, living or dead, events, or locales is entirely coincidental. The author acknowledges the trademarked status and trademark owners of various products referenced in this work of fiction, which have been used without permission. The publication/use of these trademarks is not authorized, associated with, or sponsored by the trademark owners
.

Hot n' Handsome, Rich & Single... how far are you willing to go?

Learn about Alex Reid before he began Managing the Bosses. Alex Reid sits down for an interview with R&S.

His life style is like his handsome looks: hard, fast, breath-taking and out to play ball. He's risky, charming and determined.

How close to the edge is Alex willing to go? Will he stop at nothing to get what he wants?

Alex Reid is book 1 in the R&S Rich and Single Series. Fall in love with these hot and steamy men; all single, successful, and searching for love.

Ask the average pedestrian on the street who Alex Reid is, and most of them will give you a blank look. One or two might venture a guess. Most would get that guess wrong. Ask anyone in business, however, and their answer will be laced with admiration, maybe spiced with a little bit of well-hidden jealousy.

Featured on the covers of both
Business Mind
and
CEO Magazine
in the last two years, the 27-year-old head of Reid Enterprises is a man worth every ounce of that respect. He’s one of the world’s wealthiest young entrepreneurs, and the sole runner of a company that last year alone brought in nearly $1.3 billion in revenue.

When I arrive at Reid Enterprises for an interview one sunny day in July, I am mildly surprised at the décor – a study in casual elegance. Certainly, the building with its black and white marble floors and collection of undoubtedly expensive art is a throwback to older times. It is a far cry from the sleek, modern décor of Silicone Valley’s lucrative tech enterprises, but it seems to work for Mr. Reid. I am ushered into his office, and given a firm handshake by the man himself. His photographs don’t do him justice.

As blessed in looks as he is in wealth, Alex Reid is a textbook example of tall, dark, and handsome. Those attributes are only accentuated by the impeccable cut of his custom-tailored suit. Any single woman – and maybe a few married ones – would cast this very eligible bachelor a second or even a third look. It may not be entirely professional to admit, but I jumped at the chance to interview him.

After shaking my hand he takes a seat, obviously comfortable here in his domain. Following suit and settling into one of the comfortable leather chairs across from him, I retrieve my tape recorder and settle down to the business of finding out what makes this young and powerful man tick.

So, Mr. Reid, let’s get right to the point. Could you tell the readers a little more about what your company does?

Mr. Reid’s voice is low and rich, his enunciation deliberate. His has the kind of voice that keeps people listening and coming back for more. Little wonder that he has risen so quickly to the top. The man is mesmerizing.

“We’re an investment firm. At its basis, that means we’re being given people’s money–or even money belonging to other companies–and we’re doing something useful with it. Something that will turn a profit for Reid Enterprises and for everyone else involved. Before you start to chide the evil, money-grabbing investor, though, know that our business isn’t cutthroat. You need a strong backbone and a clear head to be successful in this line of work, but that doesn’t mean you can’t have a heart.”

When have you been most satisfied in your life?

“
Honestly there are a few answers to that, but of course they’re all related to the company.” He taps one finger against his knee, then settles his palm flat down against it again. “The day I invested my first capital was immensely satisfying. That day, I knew I was on the right track. When I made my first million, that was just confirmation. When we broke ground for this building I thought nothing could ever top that satisfaction, but moving in was even better. And, of course, my first billion, which I just hit, felt pretty good. But it’s definitely not the top of the ladder.”

It sounds like you’re always looking for the next step. Do you think you’ll ever have a moment that you could describe, by itself, as your most satisfying?

“I think that’s the secret to it, actually,” he says, his smile as confident as the set of his shoulders. “Never being satisfied. Always looking onward to the next big thing. The next set of hurdles to jump. One day, when I’m lying on my deathbed, maybe then I’ll be able to pick a moment, but-” he laughs, “maybe I’ll just be thinking of that one more thing I could have done.”

Are you more of a hunter or a gatherer?

“A hunter. No question.”

Do you care to elaborate on that?

“The reasons should be obvious, I think.” His cool smile has sharpened a little around the edges. “I’m a ‘go for it’ kind of guy. I see what I want, and I take it.”

So a very driven person. What three words would you say best describe you?

“I would agree with ‘driven,’ absolutely.” He leans forward in his seat, a pair of blue eyes that have undoubtedly left a few female hearts beating a little faster meeting my gaze directly. “I don’t believe in waiting around for something to happen. If what I want is accessible, I access it. If it isn’t, I make it accessible, or I create it myself. I don’t settle.

And the other two?

“‘Independent’… although I suppose some might call it something else. But I built this company from the ground up, and I always have a hand in everything it does. I don’t like to lean too much on other people. They do their part but if the business plan is in your head, you’re the best person to execute it. You know the saying: ‘If you want something done right, you have to do it yourself.’”

He settles back again, crossing one leg over the other, and grins at me.

“That makes the last word, or phrase, ‘In control.’ I like knowing what’s going on. Eventually, every chain of command reports back to me.”

Alex Reid laughs. “I handle it.”

And what about your family? You have a father, and a brother a bit younger than you. They’re not involved with Reid Enterprises at all. Why is that?

“They have their own lives to tend to. This is my business. They handle theirs.”

Would you say they had any influence on your desire to start your company, or on the way you run it?

“Certainly there are people who have influenced me in my goals. Men like Michael Bloomberg, Bill Gates, and Steve Jobs. They all knew what they wanted, and they got it. Like me they started low, and look at them now.”

Is that what made you start Reid Enterprises?

“
I’ve never really been cut out for cubicle work, as I’m sure you can imagine. Rank and file jobs just don’t do it for me. I wanted to create something valuable. Something that would last. I think I’ve done pretty well at that.”

You’re a billionaire and not even thirty. I think ‘pretty well’ is an understatement. What do you do with all that money?

“What does anyone do with that much money? I keep a nice house. I enjoy a few luxuries. The rest of it is invested or locked up in high-interest accounts. Just because you have a lot of money that you should never have to worry about it again doesn’t mean that you shouldn’t be careful what you do with it. You never know what might happen. Markets crash. Economies go under. I don’t rest on my laurels; I plan for the future.”

Sage advice for someone so young. Do you have any other tips for our readers?

“It’s been said before, but if you want something you have to go for it. No one is going to just hand it to you. Decide where you’re going and the steps you need to take to get there, and then take them. If you don’t, you’re just going to sit where you are forever. And the more you can do yourself, the better. At the very least, know what everyone under you is doing. Know what their standards are. Your company is only as good as the people who work there.”

We’ll all have to keep those things in mind. And, finally, Mr. Reid, the question all of our readers are waiting for. Are you still single?

He chuckles, and levels that blue gaze on me again. My own heart, I admit, beats a little faster. “Oh,” he says slowly, “very. In fact, Miss Lloyd, are you doing anything tonight?”