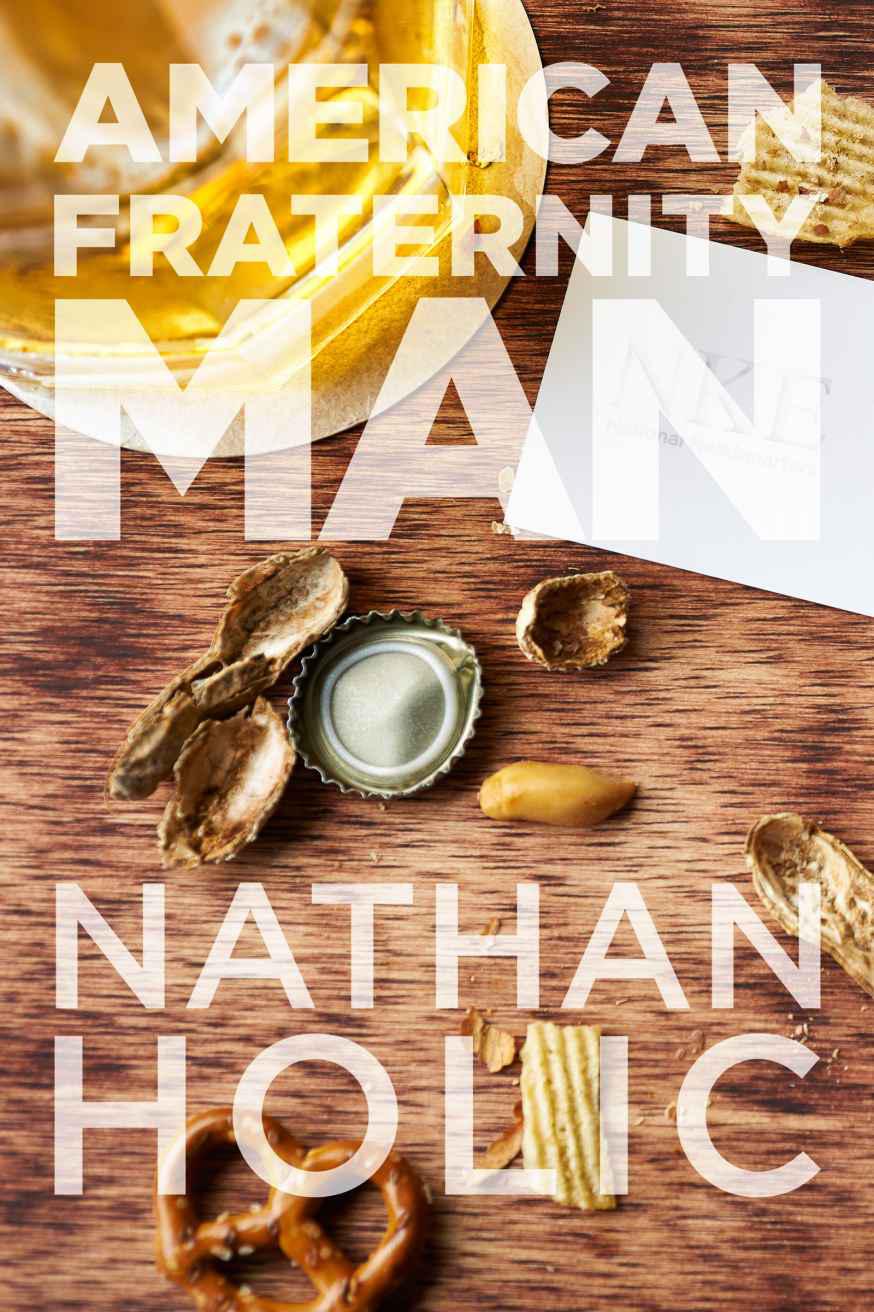 This book is available in print at most online retailers

This is a work of fiction. Names, characters, places and incidents are the product of the author’s imagination or are used fictitiously. Any resemblance to actual persons, living or dead, business establishments, events, or locales is entirely coincidental.

What Others are Saying about
American Fraternity Man

What Others are Saying about
American Fraternity Man

“The culture of Greek life is both skewered and embraced in this take-no-prisoners coming of age novel from debut author Nathan Holic. Here, you’ll meet one character who has reached the conclusion that goodness is just and that evil is easy to spot. But for Charles Washington, the dynamic hero of this compelling story, right and wrong are slippery things. In the end, it’s a pleasure to tumble into Charles’ world, even as we watch that world pulled out from under him.
American Fraternity Man
is, at once, satire and seriousness itself. But, more than anything, it is a compulsively readable book, a thrilling ride, beginning to end.”

“Nathan Holic writes with the precision and confidence of a true badass. Hide your valuables and DIG IN.”

“In a transnational tour of the college scene, it’s Man versus the Fraternity World, and even the parents are too drunk to drive. Nathan Holic offers a fast-paced and multifaceted look at campus Greek culture and what it might take to effect change from within.”

For Heather,
whose eventual book on the life of sorority consulting will be much sexier than this one.

And for Jeanne Leiby,
who knew nothing about fraternity life, but damn, did she know how to tell a story and how to bring out the best in a writer.

CHAPTER ONE. The Wine Bottle.

Three months ago, about the time that Florida’s summer was overtaking spring, about the time that Obama was emerging from his slugfest with Hillary to assert himself as the
change we could believe in
, I was hoping I might be able to do the same: convince everyone—my girlfriend Jenn, my fraternity brothers at EU, my parents—that I’d become a new man, the very definition of “role model” and “leader.”

I was graduating.
I’d taken a job half a country away. I’d be leaving everything and everyone behind. And I had only one night when they’d all be gathered together: it would either be the most hopeful night of my life, a celebration of who I was and the great things I wanted to do, or it would be a confirmation of everything I’d hoped was not true about myself. Because that was the question, wasn’t it: was I ready to be a leader, or was I just pretending?

On the afternoon of my final day as president of Nu Kappa Epsilon fraternity, my father appeared at the front door of the house, cradling a bottle of red wine tight to his chest and glancing about nervously, as if some National Lampoon’s Frat Guy stereotype—able to detect alcohol the way a police dog could sniff out pot—might come zipping through and snatch the bottle from his hands. It was early afternoon on a Friday, several hours before the start of the Senior Send-Off event I’d planned for the graduating brothers in the fraternity house, and my father was here alone, my mother nowhere in sight.

“Wine for the party,”
he said. “From our trip to Napa Valley.”

“Wine for the party,” I repeated. He w
asn’t yet holding it out for me so I wasn’t sure if I was supposed to take it. “You shouldn’t have.”

“I know how much you fraternity boys love to drink,” he said.

“Come on.” I smiled to show good humor. “This is a family event.”

Ordinarily, of course, the Senior Send-Off was
anything but
a family event. It was the final event of our Spring semester, the night when our fraternity would gather in the chapter room to toast the new graduates, to share old stories and drink long into the night. Sometimes the seniors drafted “Senior Wills” and bequeathed to the young members their old memories, their old hook-ups, their old nicknames; sometimes the seniors brought gigantic Tupperware bins full of old fraternity t-shirts and jerseys and tossed them out to the crowd, one at a time. We ordered a stack of pizzas and sent someone to Super Wal-Mart to clear the shelves of Natty Ice, and we sat in the chapter room drinking and chanting and cheering and immersing ourselves in crude in-jokes and embellished narratives of past adventures, all of us smelling like spilled beer and Crazy Bread by the time the sun came up the next morning.

But this year,
Nu Kappa Epsilon had won “Chapter of the Year” at Edison University’s Greek Awards banquet. We’d also won the “Champions Trophy” for overall dominance on the intramural fields, and
Florida Leader
magazine had recognized our chapter’s intense campus involvement. “That’s a hell of a year,” our campus Greek Advisor told me.
“Invite your parents. Invite your families. This is a chance to celebrate the positive aspects of fraternity life, to really change some minds about what it is we do.”

I was the outgoing President. It was my event to plan. So I figured, why fester in a stinky chapter room with cheap beer and pizza; why not celebrate in a way that
mattered
? And I invited the mothers and fathers of every member, our first parent-themed event in three years. We’d make it classy, mature. This would be a night for all of us to drink vodka tonics and give speeches and receive academic awards, a night to talk about how much the house had meant to our academic progress, our development as leaders and citizens, our futures. This would be a night that parents and students alike would remember for years to come, and I was a
President
whose legacy would be remembered forever.

“A family event,” my father said. He ran his hands down the surface of the wine bottle. “That’s what I’m afraid of.”

Again, I tried to laugh.

He stepped carefully up the steps to our front door, still holding the wine bottle
close and looking down at the concrete as if there was sloppy danger everywhere at the fraternity house, as if he might slip on some errant splash of spilled beer or urine.

“I’m sure the other parents will appreciate the wine,” I said. “
Looks like a good one.”

And I reached for it, but he held it back.

“Well,” he said, still holding
tight, “I’ll hang onto it for now. Why don’t you show me around the house before the party starts? Things look different.”

He hadn’t been to the fraternity house in three years, and in that time we’d remodeled the first floor, adding a fireplace and a stone floor and a series of patio-style tables—it all had an outdoorsy look, as if the interior of our house was actually the backyard. The alumni had grown weary at having to replace the furniture every three years; they’d reasoned that stone was easier to clean than carpet, and outdoor furniture less likely to be damaged by spilled beer than cloth or leather couches. But I didn’t mention any of that.
My father was giving me the opportunity to impress him. Maybe he wanted to believe that his son had grown and matured, and telling him that we now had lawn furniture because we were too destructive for regular furniture: not a good idea.

“Follow me,” I said, and
I led him around the fraternity house, pointing out the things I
did
think were important: that the stone floors had been mopped, that the counters were Windex-shiny and that the wood shelves smelled of Pine Spray. Walls were patched, repainted, free not only of holes and gashes, but also scratches and scuffs. Artwork on the walls, potted plants (living!), new exercise equipment in the game room
.

Eventually we arrived at the bar, a stunning piece of furniture built by a group of alumni just one year before, the wood coming from a torn-down building in Naples, the original office space for a lawyer named Damon Jarred who’d founded the fraternity chapter at Edison University decades ago; the glass on the cabinet doors had come from the windows of our first fraternity house from the 1960s.

My father stroked his chin
. “So your alumni built this for you, then? One more entitlement.”

“Here,” I said, “we can put your wine with the other
s.” I’d bought a shopping cart full of wine from the liquor store, some whites, some reds. I had no idea the difference in the colors or names; Merlot meant as much to me as White Zinfandel or Chenin Blanc. But my father wasn’t quite so nonchalant.

“Sure.” I’d gone for affordable brands, too, nothing over $10, because I wasn’t even sure if—given a choice between Yellow Tail Chardonnay and a Grey Goose martini—anyone at the party would even drink the wine.

My father shook his head. “Do you even have a corkscrew?”

“I guess I didn’t think about it.”

“Well.” He was still holding the bottle tight. “I have one in the car. I’ll just need it back.”

“No problem. I’ll guard it with my life.”

“Charles,” he said. “I don’t want to have to search around for it tomorrow, or find out someone threw it into the pond.”

“Dad, it’s not an issue. It’ll be all right. It’s not that kind of event.” I smiled, tried to give him the same “you can trust me” look I’d so recently used in my job interview.
But he didn’t look convinced. In fact, my father was now wearing an expression of such deep skepticism that I wondered if he’d actually brought along the corkscrew with the
expectation
that I’d be unprepared. Was this a test of my ability to plan an event for adults? Had I just failed?