Read An End to a Silence: A mystery novel (The Montana Trilogy Book 1) Online

An End to a Silence: A mystery novel (The Montana Trilogy Book 1) 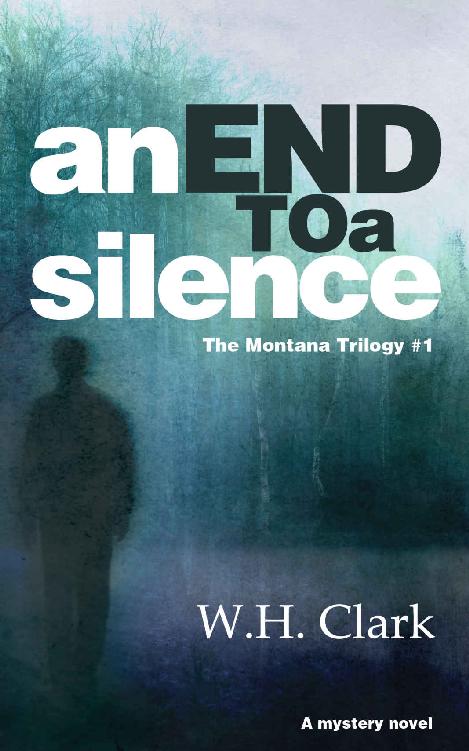 This is a work
of fiction. Any resemblance to actual persons, living or dead, or actual events
or locales is entirely coincidental.

No part of this
book may be reproduced in any written, electronic, recording, or photocopying
without written permission of the author.

Summer. Montana,
1985. When seven-year-old Ryan Novak suddenly disappears from his home in a
small rural town, Detective Newton picks up the case. Convinced that the boy’s
grandfather - school janitor and former woodsman Bill O’Donnell - knows what
happened to the boy, Newton’s growing obsession with his only suspect begins to
take its toll.

Winter. Montana,
2010. Twenty-five years later and, in the final days of Newton’s tarnished
career, Bill O’Donnell is found murdered. Newton’s successor, a city-toughened young
Texan detective named Ward, is the lead investigator. As Newton readies himself
for retirement, Ward draws him back into the mystery he couldn’t solve. Can
they find the old man’s killer and finally uncover the truth about what really
happened to Ryan?

The boy
is still, already cold, even though a gentle summer evening breeze whispers of
somewhere altogether warmer.

Detective
Newton sat at the counter of the Honey Pie Diner and finished his coffee. He
took a last bitter sip and then stood creakily and walked the few feet down to
the other end of the counter, where the attractive woman with the vivid red
hair stood ringing up a check at the cash register. Her fingers tapped at the
computer screen and made a click each time one of her long, painted fingernails
caught it. And he watched her, not quite peripherally, through dimming vision.
She placed a Styrofoam cup on the counter.

“What do
I owe you?” Detective Newton said. His head was cast down as he spoke, but the
eyes looked up, like those of a chastised dog.

“Well, I
ain’t put my prices up since yesterday,” she said, cocking a thumb over her
shoulder at the menu board, and she smiled. Her name badge said she was called
Cherry.

“Well,
then,” she said, and she stopped tapping at the screen.

He put a
hand in his pocket and pulled out a tattered bill. He handed it to her and as
she took it, he held her hand gently. The smile slowly faded from her face and
his found some color.

“Okay,”
she said, stretching out the word.

A fat man
sitting behind Detective Newton shouted over his shoulder, “How we doing with
that check?”

Newton
jerked around and looked into the pudgy face of the man who had called out and
Newton’s eyes, angry dog, lingered there until the man looked away.

“Just
another asshole,” Cherry said, not quite loud enough for the man to hear. “I’d
better get him off my premises.”

Cherry
said, “Thanks.” And she busied herself with the cash register again and Newton
picked up his coffee and left, casting a glance at the asshole as he walked
past.

She
watched the detective walk out of the diner and then briefly stopped what she
was doing and shook her head gently. The pudgy man turned around, but before he
could say anything she said, “Check’s on its way, sir,” and under her breath,
“fucker,” and the check was produced with a few more fingernail clicks.

Outside,
Newton patted his pockets vaguely with his free hand as a freezing wind blew
straight through him. After a few moments he pulled out his keys, opened the
door of his brown, boxy SUV, and hauled himself in, shivering. He placed the
cup in the holder and then he leaned over and looked into the rearview mirror,
turning it slightly for a better view of himself. He studied the old fool
looking back and then he looked at the back of his hands and saw the spots of
old age. He started the engine, buckled up and pulled away from the roadside,
making an effort not to look back into the Honey Pie Diner at the woman with
the vivid red hair who, for an excruciating moment, had been his beautiful wife
of thirty years ago.

The phone
rang in the station and McNeely answered it. She half stood up and looked over
at Newton, who was sitting at his desk staring at the box in front of him. It
stood alone on the otherwise empty surface save for a telephone, the coffee cup
he had fetched back from the Honey Pie Diner, a tower of empty plastic trays,
and a row of five pills of different sizes and colors set in a line. He picked
up the first pill, popped it in his mouth and took a drink from the coffee cup.

“Got a
call for you,” McNeely, Westmoreland Police Department’s Crime Scene
Investigations Technician, said. She got no response. Newton picked up the
second pill, put that in his mouth and knocked it back with another swig of the
coffee.

“Detective
Newton. You,” she said louder and Newton looked over and pointed at himself.
McNeely nodded and she prodded a couple of keys on the phone keypad. Newton’s
phone rang and he picked up. He swallowed.

“I know
it,” Newton said. He changed the phone to the other ear.

“I have
something for you.”

Newton
paused for a moment, staring at the unembellished partition screen in front of
him.

“Shall I
call back for a better line?” The medical examiner said.

“You want
help with a ticket?”

“A
ticket? No, no. You misunderstand. I’ve got you a suspicious death. Just done a
post mortem on an old man from Sunny Glade. He—in fact, Adam, you able to pop
down and see me? This might be best in person.”

Newton
placed his hand over the mouthpiece.

“Where’s
the new guy?” he whispered loudly to McNeely. She shrugged without looking at
Newton. He uncovered the mouthpiece and fiddled with his bottom lip.

“Okay,”
Newton said, and he hung up the phone. He sat there a while looking at his box.
He took out a photograph and stood it up on the desk. It showed Newton and his
wife, taken about thirty years ago going by the fashion. He stared at her vivid
red hair done in the same style as Cherry from the diner. Then he picked it up
again and put it back in the box. He scraped up the remaining three pills,
tipped them into his mouth and took a big swallow of coffee, and then he stood
and ambled over to the coat stand, where he took his coat and put it on. His
heart missed a beat and he felt light-headed for a moment, which he put down to
the two coffees he’d drunk, or maybe the pink pill.

He held
there for a few moments before saying to McNeely, “I’m heading out.”

“You
bring me something back?” she said.

He looked
at her.

“Ain’t
going there,” he said. He turned towards the door and then he stopped, took a
deep breath and held it there for a few seconds. He turned back and called to a
compact man over the other side of the room.

“Sean. We
got a possible crime scene needs preserving. Over at Sunny Glade.” His voice
had no color.

“I’ll get
on to patrol,” Sean, the sergeant said.

“McNeely.
Could you head on down there? You know where the new guy is?”

“Anybody
have his number?” Newton said. Nobody said anything over the sound of clacking
computer keys.

The new
guy and Helen McNeely arrived at Sunny Glade at the same time, the new guy’s
gleaming red Alfa growling to a stop and the booming rock music cutting out
with the engine. A uniform from Patrol standing outside quickly discarded his
cigarette and stomped it into the ground with his boot.

McNeely
made her way over to the new guy. Rock salt crunched under her feet and her
breath chugged out in quick bursts.

The new
guy took a glance around. The home glowed in the winter gloom and a cloud sank
down on its roof, churned around the security lights and oozed down its walls.
The gardens – roses and buddleia and copper birch hedges forming a barrier
between the residents and the outside world – were only hinted at beneath the
dimness of the day. Shadows of a mature mini woodland - a plantation of
ponderosa pine, aspen, maple and ash - protected the northern aspect from the
worst of the mauling winter winds.

“You got
some serious horsepower there, detective,” McNeely said, and she stroked the
hood as the new guy straightened his Italian-cut suit.

“Just
Ward,” he said as he put on his hat over his short-cropped hair.

“And a
serious hat,” she said.

Ward
smiled at her. He spoke briefly to the uniformed cop while McNeely fidgeted
against the cold. Ward’s suit didn’t offer much protection from the arctic
weather but he didn’t seem discomforted.

Ward held
open the door and waved McNeely in.

“Ladies
first’s what my ma taught me,” he said.

“Obliged,”
McNeely said, and she rolled her eyes but smiled.

The
receptionist, Jackie, greeted them with her usual cheery “hello,” and then her
face slouched into the serious face that she reserved for her children. “Has
something happened? Well, I know something has happened but what might…” Her
voice trailed off as Ward interrupted with a held up hand.

His firm
Texan drawl fixed Jackie upright. “Sorry, ma’am, but could you point us to—”

“Oh, of
course. Of course,” she interrupted. “Down the corridor, past the dining room.
I’ll take you. Might be easiest.”

“Thanks,
but I think we’ll be okay there, ma’am. Thank you for your help, though. The
officer here will have a few words with you if that’s agreeable.” He winked at
her.

Jackie’s
posture straightened. “Of course.” She preened and gave Officer Stuart half her
attention, the other half on Ward.

Ward and
McNeely headed off, Ward tapping out a steady and loud clip-clopping rhythm
with his black boots, which gleamed out of the bottom of his dark gray pants.

The scene
that greeted them was a serene resting place. A nice place to die, Ward
thought. And then, before they could enter the room, a man appeared, blustering
down the corridor.

“I’m
Felix Grainger. The manager here.” He wiped his hand on his pants before
offering it to Ward, who didn’t offer his back.

“I would
like to speak to you later if that’s okay. You going anywhere?”

Cured By Blood: A Vampire Pregnancy Romance by Samantha Snow
Silence of the Grave by Indridason, Arnaldur
A Face in Every Window by Han Nolan
The Collision on Hardwood Drive by Bryant, Elizabeth
The White Guard by Mikhail Bulgakov
Blighted Land: Book two of the Northumbrian Western Series (Northumbrian Westerns 2) by Ian Chapman
Underworlds #1: The Battle Begins by Tony Abbott
Almost Midnight by Michael W. Cuneo
The Swami's Ring by Carolyn Keene
Compact with the Devil: A Novel by Bethany Maines