Read Angel in My Arms Online

Angel in My Arms 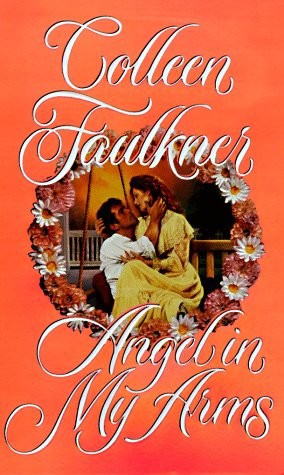 "You can't talk about my friends like that," Celeste said. She
kissed Fox playfully on the lips as she brushed the damp hair off his
forehead.

"And if I do?" He lifted a dark eyebrow comically. "How will you punish me?"

She laughed sensually as she took his hands in hers. "Let me take you upstairs and show you."

Celeste led Fox up the stairs and into her room. Inside the doorway
she faced him and wrapped her arms around his neck. She pulled him
closer and was rewarded by the hard, hot sensation of his hungry mouth
against hers.

"Celeste," he murmured in her ear.

"Fox." She stroked his cheek with her palm as she studied his
suntanned face. His eyes were half-closed, his voice thick with desire
for her.

She kissed an invisible path down the center of his chest, caressing
the hard, muscular flesh, teasing the crisp mat of dark hair.
Playfully, she tugged at one of his nipples with her teeth and laved it
with her tongue. He pulled the tortoise hairpins from her hair, and it
fell in a thick wave of red over her shoulders and down her back.

"You have the most beautiful hair, Celeste." He pushed the heavy
locks over her shoulders so that he could see her face. "Like an
angel's."

They kissed again… a long passionate kiss that whispered of the need they had for each other.

Destined To Be Mine

To Love a Dark Stranger

Angel In My Arms 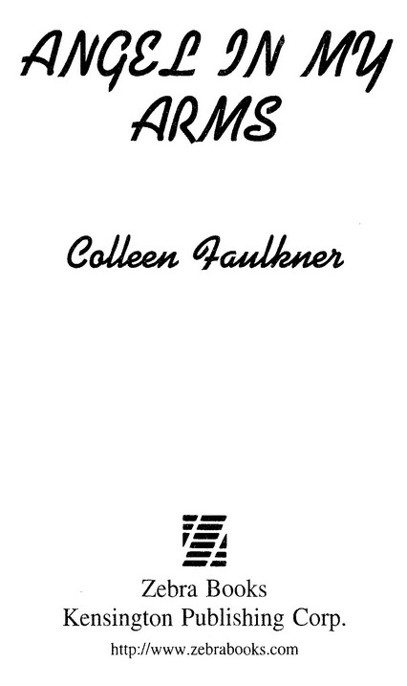 ZEBRA BOOKS are published by

All rights reserved. No part of this book may be reproduced in any form

or by any means without the prior written consent of the Publisher,

that this book is stolen property. It was reported as "unsold

and destroyed" to the Publisher and neither the Author nor

'the Publisher has received any payment for this "stripped book."

Celeste sat lightly on the edge of the iron bed and smoothed the
crisp coverlet. Her friends filed quietly into the room and surrounded
the bed. She heard nothing but muted footsteps, the swish of starched
petticoats, and the hiss of the gas lamps that lit the room. For once,
the lively group was subdued.

"John," Celeste whispered, half-fearing he was already dead. "John,
love. It's Celeste. Can you hear me?" She took his bony palm and
smoothed it between her two hands. His skin was gray and transparent.
Cold. "John," she persisted as she willed herself not to cry. "They're
all here, as you asked; Sally, Kate, Titus, Ace, even the Reverend."

John MacPhearson's eyelids fluttered. He inhaled a whistle of air
and his chest rattled like a stove pipe. He coughed and struggled to
catch his breath.

Celeste lifted his worn hand to her lips. "It's all right," she soothed. "Take your time."

John sucked in another labored breath and opened his eyes. "C… Celeste?"

She put on her best smile and leaned closer. Before his illness,
John had been a strikingly handsome man with sparkling black Indian
eyes and salt and pepper hair. The sparkle was gone from his eyes, the
luster gone from his hair. "Here, you old codger. Where else do you
think I'd be?"

Another cough wracked his body, and everyone in the room seemed to
struggle with him to gain the next breath. The air smelled not of a
cloying sickroom, but of sunshine and herbs. Celeste wouldn't have it
any other way.

After a long, tense moment, John managed to smile. A decent smile
for a man dying of tuberculosis at fifty years old. "Thought you'd be
playing cards at Big Nose Kate's. It's… it's Sunday, ain't it?"

Celeste's heart swelled with sorrow, but she gave a little laugh.
"Ah, we've got hours yet. Still time to get in some Black Jack before
supper."

He closed his eyes. "Put a chip in for me, will you, sweetheart?"

He closed his eyes, then opened them again. "Silver?"

"Right here on the end of your bed," Celeste assured him.

The yellow dog lifted its head and whined pitifully, as if already in mourning for the death of his master.

"I—" John started to speak, but a fit of coughing seized him.

Celeste helped him lift a bloodstained handkerchief to his lips and
held his shoulders as his frail body fought to gain another breath. He
exhaled with a rattley
whoosh
and everyone in the bedroom exhaled with him in sympathy.

It took so long for him to inhale again that Celeste wondered if
this would finally be John's last breath. The thought of losing her
friend twisted painfully in her heart, but he had suffered too long. No
man as good-hearted and full of life as John MacPhearson deserved to
suffocate to death.

For a long moment everyone stood and stared at John and Celeste,
probably wondering if he were dead. There was Big Nose Kate, the madam
of Kate's Dance Hall, dressed in her Sunday best red crinolines, and
Silky Sally in her silk sheath gown as shimmering as a drop of water.
Titus, the washed-up gold miner, stood to the rear in his dirty denims,
smelling of cheap rye whiskey. Ace, the young deaf and dumb half-breed,
stood at Titus's side, perhaps to catch the miner if he began to sway.
The last visitor was the good Rev. Joash Tuttle, who hovered on the far
side of the bed, dressed in a tight, cheap black suit, a worn Bible
cradled in one arm. Celeste knew every man and woman in this bedroom
would mourn the loss of John MacPhearson, a man they called their
friend.

"I'm here. Right here." She gently dabbed at the bloody corners of his mouth with the handkerchief.

Sally sobbed and Kate handed her a lacy handkerchief from the sleeve
of her gown. "Straighten up or get out," she hissed as she elbowed her
young charge.

Sally dabbed at her painted lips and sniffed. "I'm sorry."

John struggled to sit up in the bed, and Celeste reached behind him
to fluff the goose down pillow. "Called you all here to—" he gave a
hacking cough "—to witness my—" cough "—signature." He pointed to the
carved rosewood armoire on the far side of the room. "Fetch my box,
Celeste. You know, the tin one."

Deftly, Celeste retrieved the battered tin box painted with Indian
symbols from the clothing cabinet and returned to John's side. "Here
you go."

With a shaky hand, he opened the box and rifled through papers and a
few photographs. "Got it." His head fell back on the pillow and another
fit of coughing wracked his body. When he could breathe again, he held
out his hand to the reverend. "Gimme your fancy fountain pen, Joash. I
know you got it inside that funeral suit of yours."

The reverend handed his friend the pen. "Not my funeral suit, I'll have you know, John. It's my lucky card-playing suit."

The joke, though weak, was enough to make everyone in the room laugh and crack the veneer of awkwardness.

Sally poked the reverend playfully in the side. "I was hoping to win enough off you to buy myself that new pot of rouge, Joash."

The reverend laughed with them.

John uncapped the pen and squinted to focus his eyes. "I want you
all to witness that I'm of sound mind. This here's my will and last
testament." He sucked in a breath. "I won't bore ya with the details,
'cause I know you got a card game to git to, but I don't want no one
contestin' my words after Fred hauls my body off in that new glass
hearse of his." He paused. "I'm givin' the house to my Celeste."

"Let me speak, will you, girl? I ain't got much breath left in me," he panted.

The Common Cold (Book 1): A Zombie Chronicle by Roberts, David K.
The Original Crowd by Tijan
How To Break Up With An Alien by Magan Vernon
Shoe Done It by Grace Carroll
Click by Tymber Dalton
Somewhere Between Water and Sky (Shattered Things #2) by Elora Ramirez
The New Kid by Mavis Jukes
B004L2LMEG EBOK by Vargas Llosa, Mario
Un cadáver en los baños by Lindsey Davis
Knight of Deceit (Knights of Passion Series 2) by North, Evie