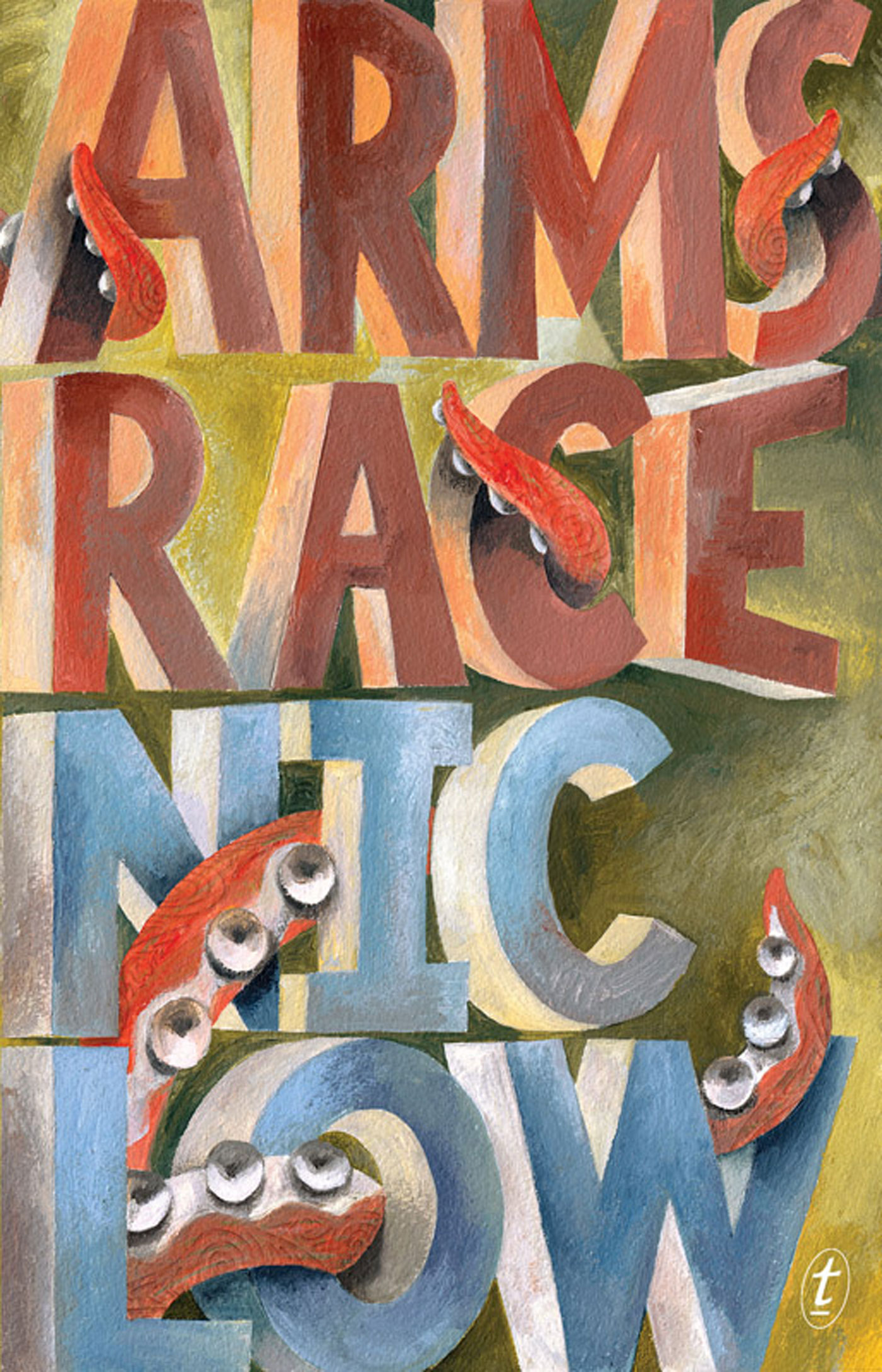 Nic Low is an author and artist of Ngai Tahu Maori and European descent. Born in
Christchurch, he now divides his time between Melbourne and a bush retreat near Castlemaine.
Nic's fiction, essays and criticism have appeared in the
Big Issue
,
Monthly
,
Griffith
Review
,
Lifted Brow
,
Art Monthly
and
Australian Book Review
. He was runner-up in
the 2013 Overland Short Story Prize, shortlisted for the 2012 Commonwealth Short
Story Prize and won the 2011 GREW Prize for Non-fiction. Until recently he ran Asialink's
international writing program. He is working on his next book, a literary exploration
of New Zealand's Southern Alps.
dislocated.org 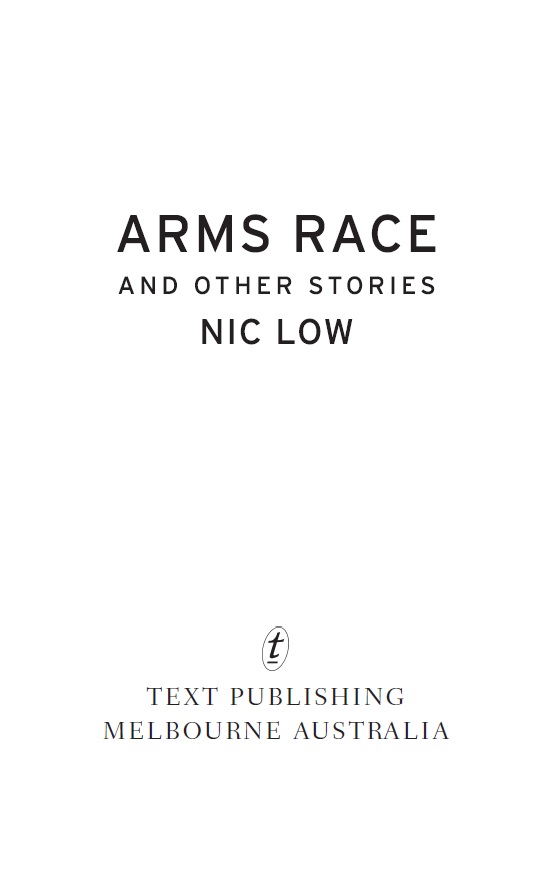 The moral right of Nic Low to be identified as the author of this work has been asserted.

All rights reserved. Without limiting the rights under copyright above, no part of
this publication shall be reproduced, stored in or introduced into a retrieval system,
or transmitted in any form or by any means (electronic, mechanical, photocopying,
recording or otherwise), without the prior permission of both the copyright owner
and the publisher of this book.

Early versions of some of these stories were published in
Griffith Review
(âOctopus'),
Overland
(âRush') and the
Big Issue
(âSlick').

First published in 2014 by The Text Publishing Company

This project has been assisted by the Commonwealth Government through the Australia
Council, its arts funding and advisory body.

AT TEN the sun finally sets and the pub fills up and the news comes on. It's my round.
A couple of aunties up the back give me a nod but everyone else seems
pakeha
. The
bloke behind the bar looks down at my tarred hands.

You one of the roading boys? he says. I'm Don.

When I get back with the jugs there's a couple of trampers sitting at the end of
our table. A story comes on the TV about the Ruatoki police raids, all helicopters
and black balaclavas and shouting.

Fucken rubbish, the first tramper says. Eight million bucks of surveillance and they
catch some guys shooting pigs in the hills.

More like shooting their mouths off in the pub, his mate says. Cops've been watching
too many movies. They reckoned there'd be grenades and napalm, and all they got was
three old rifles. Like there'd be Maori terrorist camps in New Zealand.

Taihoa puts down his beer and leans in close. Nah, he says. It's for real.

What is? the first guy says.

The training camps. Cops found nothing 'cause they're stupid. The real guns are buried.
My cousin went to that training camp. It was awesome.

The two trampers go real quiet. They glance at each other.

Cops only found the one camp, Taihoa says, but there's heaps. That's why we're down
here. Got work on the roading gang so we got an excuse to come to the island and
train.

He nods over at a bunch of fishermen at the pool table. Those fellas too. They're
hardcore.

What do they teach you? the first guy whispers.

Taihoa glances round, then leans in even closer. It's the al-Qaeda training manual
with a Maori flavour. Heavy weapons and explosives, but they throw in some
taiaha
and
haka
and a bit of cannibalism.

The guy sprays his beer all over the table. JJ pretends to look for something under
his chair so they can't see his face.

And bushcraft, Taihoa says. When we get the signal we gotta leave the cities and
live off the fat of the land. Or the fat of our enemies.

The two guys are staring at Taihoa. Now's my chance.

He's just taking the piss, I say. The real threat is the octopus.

At that the boys lose it. The what? JJ gasps.

I'm serious, I say. There's a giant octopus in the bay. If we make a wrong move and
wake him up, we're done. All of us.

The boys are crying with laughter. People are looking at us. Taihoa slides open the
heavy sash window and tries to light a cigarette. The wind keeps blowing his matches
out. There's a buzzing sound coming from nearby.

Hear that? Taihoa says. They're out there training now. How to use a chainsaw in
the dark.

Sure thing, bro, Taihoa yells back. He grabs a full jug off the table and climbs
through the window, then closes it behind him. The whole place cracks up. Then the
window opens again and Taihoa grins back at us.

The boys climb out the window in a sag-arsed tumble, leaving me there by myself.
Something goes crunch inside.

Octopus, bitches! I scream through the half-open window. I'm not comin' out. There's
a mean-as mother-fucken octopus out there. You better run!

Through the window I see Tama sprawled out under the island's one streetlight. He's
fallen over from laughing so hard. Taihoa pulls him up off the gravel and they head
towards the wharf. They think the octopus is a helluva joke.

Thing is, I'm not joking.

The boys call me Little Shit. Mostly I'm just Little, when I don't feel like leaving
the house. I don't believe anything those days. Other days I'm king of the world
and up in your face, I get the full title. Those days I believe too much. Today's
one of them. I grab the window and crash it shut. I can't see the boys out on the
road anymore. Just the fogged reflection of everybody in the pub staring at me. I
turn to face them, breathing hard. I'm still in my dirty work blues and orange high-vis
vest.

Crazy bastards, I say. They think I'm takin' the piss.

Nobody moves. They've all stopped talking. There's just the tinny chatter of rugby
on the TV and the clink of glasses going down along the bar. Behind the till Don's
watching me through slit eyes.

Dad told me to watch for signs out here. We're six days into a summer building roads
on Rakiura and I've
found one. I step forward into the middle of the room, and start
to preach.

Listen up, all right? You fellas gotta be careful out there. When you leave the pub
tonight and get in your cars you go in fear, 'cause I saw this huge octopus from
the back deck of the launch. Yes, I did. He's sleepin' in the middle of the bay.
You piss him off and we're all dead.

I turn to the fishermen round the pool table.

You fellas must have seen him out there on the boats. He's massive.

The nearest fisherman looks at me real hard and gives this little shake of his head,
like he's trying to tell me something, but there's no time to ask. The beach is right
across the road and the octopus is right there, a black stain spreading under the
water. I raise my voice and let it ring out the way Dad does at his sermons.

I try to smile but it comes out wrong, all big eyes and teeth like a
pukana
grimace.

Don comes out from behind the bar and walks towards me.

There's no hope for this lot. I take a step back. What are you fellas looking at?
I ask the room. Don't you know, we're the roading gang. We tried to warn you.

I slide the window back up and half climb, half fall
through it. Outside, the wind
tears my clothes off. There's only one thing for it.

At our place, curled in the dark trying to make myself sleep, I'm safe. But that's
not what a leader does. That's not what Dad would do. The others are still out there.
I put my boots back on.

It feels like hours before I find them at the wharf. The wind's up and singing through
the masts. They've got the back door of the ferry terminal open. JJ's up to his usual
shit, banging round inside using his phone as a torch. Taihoa sees me and turns.

Octopus! he yells. Run, you bastard!

Tama cracks up, but then he sees my face. He's got his hood up and his curly afro's
coming out the sides. What you on about this octopus, bro? he asks. You havin' a
Little Shit day?

Yeah, I tell him. He's somewhere out there, bro. I saw him. Eight arms and a big
evil eye. We wake him and we're done. Boom.

I jab Tama in the stomach, harder than I mean to.

Taihoa frowns. He cocks his head on one side. You're not joking, are you? How you
know there's an octopus?

Saw him from the ferry.

How big is he?

I lower my voice. Bigger than the pub.

Tama folds his massive arms.
Riiight
, he says. Bigger than the pub.

I tried to warn those guys but they didn't want to know.

Bugger them, Taihoa says, hopping from foot to foot to keep warm.
Pakeha
get what's
coming. But it's all good, right? This octopus isn't gonna come for us?