Read Baby It's Cold Outside Online

Baby It's Cold Outside 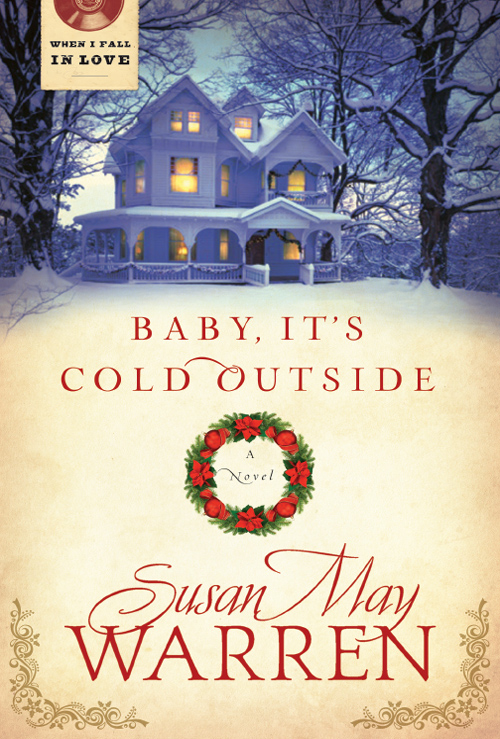 All rights reserved. No part of this book may be reproduced in any form, except for brief quotations in printed reviews, without permission in writing from the publisher.

All characters are fictional. Any resemblances to actual people are purely coincidental.

Summerside Press
TM
is an inspirational publisher offering fresh, irresistible books to uplift the heart and engage the mind.

For Your glory, Lord

If she could, Dottie would simply erase the next three days off her calendar.

More than any other holiday, Christmas had the power to rip her asunder. A thousand tiny shards of excruciating memory bombarded her as she ventured through Berman’s Grocery store on the annual requisite journey to pad her pantry for the holiday.

Christmas was for those with something to celebrate, with family, and the hope of a better tomorrow. Even Berman’s Grocery store believed that. As if emboldened by the optimism of the new decade, and casting away the specter of rationing over the past five years, they advertised a holiday special on Rock Cornish game hens at thirty-nine cents a pound.

Dottie Morgan picked up the packaged hen. It fit well into her gloved hand, weighing two pounds, maybe a bit more. In all her forty-four years, she’d never had a Rock Cornish game hen.

Behind her, a mother in the bakery section corralled two giggling schoolchildren. Dottie peeked at them—Minnie Dorr, with her little tykes, Guy and Hazel. She recognized the grade schoolers, dressed in their blue-checkered wool jackets, belts hitched around their bulky waists and sweltering in their knitted caps, from the library’s young readers program. Six-year-old Guy could wheedle right under Dottie’s skin like a burr.

Or, a curl of warmth, if she let him.

Dottie turned away from them, dropping the hen back into the cooler. She didn’t need a cart but hung her wire basket on her arm, passing by the turkeys. She hadn’t purchased a bird in…well, she knew she shouldn’t have stopped by the store on the way home from work. Today, the place bustled with women stocking up for the holiday, celebration in the air, and it only stirred up the old aches.

Near the canned cranberry sauce hung an advertisement of a jolly Saint Nicholas slaking his thirst with a Coca-Cola, smiling upon two pajama-clad children surrounded by gifts.

At the end of the bakery section a giant velvet stocking bulged with candy canes, Pfeffernusse cookies, and popcorn balls.

A display of iceskates and holiday lights reminded patrons to visit Berman’s Hardware, next door.

On the radio, Bing Crosby crooned out “Silent Night.”

Dottie stilled, her hand on a bag of flour, as she watched widow Cora Sundeen march past, her blond hair pulled back from her pretty face and tucked into a black boiled wool hat. Her son hung onto the hem of her matching coat. His ruddy cheeks and blue eyes could devour Dottie whole.

Cora caught sight of Dottie and slowed, her face betraying a second of hesitation before she produced a smile. “Mrs. Morgan! I was just telling Cliffy how, when I was young, we’d celebrate Christmas Eve at the library, with cookies and a story.”

Dottie calculated when she’d last seen Cora, seated at her knee at the library’s Christmas Eve reading, and put the woman at twenty-seven, or older, which meant little Cliffy must be nearly six. Cora probably had only a handful of memories of her fallen soldier husband.

“Oh, Cora…” Dottie looked away, perspiring under her wool coat, wishing, yes, she’d driven straight home. Who needed Cornish hens and eggnog, and plum pudding and fruitcake? After all, who exactly would Dottie cook for? “You know I haven’t had the Christmas story hour…well, it’s been a few years.”

“I know.” Cora’s voice lowered. “But perhaps it’s time to start the old traditions again.” Her arm curled over the shoulder of her son. “For the next generation.”

Dottie had no next generation, but she refused to show that on her face. “Have a lovely holiday, Cora,” she said. She added a smile to soften her librarian tone and turned away from Cora’s fading smile.

The radio announced, “I’ll Be Home for Christmas,” and Dottie headed for the door.

Tomorrow. She could return tomorrow when the place might be nearly abandoned, every woman in Frost, Minnesota, at home preparing for the holiday weekend.

She just about plowed over Lew Parsons ringing the Salvation Army bell just outside the door. His red velvet Santa-arm hung folded and pinned to his shoulder and he greeted her with a smile.

“Merry Christmas, Mrs. Morgan.” He used his schoolboy tone, despite the fact that he had last year married Henrietta Fitzpatrick and now had a child on the way.

Dottie tacked on the appropriate smile. “And to you, Lew.”

She probably should dig into her handbag and find a dime, but she couldn’t slow. She just might be suffocating, choking on the sweet aroma of too many families who had somehow survived this wretched decade.

As if to add gloom to her mood, the pewter Minnesotan sky had begun to drizzle icy droplets of despair, eating away the meager dusting of snow.

Dottie wrenched open the rusty door to her father’s faded yellow International Harvester truck and climbed onto the bouncy bench seat, the springs whining with the December cold. She’d long ago thrown a blanket over the seat, opting to cover the worn holes rather than replace the car. She wrestled the gearshift into place and eased the truck out of the dirt lot. The rain pinged on the windshield like bullets, as if it had already begun to turn to sleet. She turned on the wiper blades, but they cleaned only a pitiful swath in the middle. She leaned over the wheel to navigate as she turned onto St. Olaf Avenue and headed out of town.

Frost never suffered for holiday decorations. The entire town turned out in early November to embellish the lamps along the road with white pine boughs, hang lights from Miller’s Café and Soda Fountain, and add sparkling lights to Benson’s Creamery and the gilded window of the
Frost Weekly News
and the First Bank. The Snowflake Theater listed tomorrow night’s opening of
Holiday Affair
, featuring Janet Leigh and Robert Mitchum. Across the street, J.C. Penney boasted a window-sized red-berried wreath over their second-floor window, and at the end of the street, in the circular garden in front of the Frost Community Center—formerly the Germanic Center—the towering blue spruce glowed with twinkly lights against the rain.

Only the star remained absent from the top of the tree.
Perhaps it’s time to find the old traditions again…

She watched Father O’Donnell throwing plastic over the wooden crèche in front of St Peter’s Catholic Church, then turned left onto Third Street, driving past the community center. Movement inside suggested the local women’s auxiliary bedecking it for tonight’s dance.

The five o’clock whistle at the mill echoed over the soggy town.

The rain had begun to turn to ice, crystallizing on the windshield. The wiper blades bumped over the glass as they sloughed off the moisture. She passed Central Park, the cottonwoods and oaks shiny with an icy glaze, then crossed the creek at North Street. The river flowed, angry with icy chunks, its spittle grimy below the bridge.

When her father—land owner, banker, mayor of Frost—built their turreted Victorian on the outskirts of town, he’d expected the town to grow and overtake his vast acreage and add to the family coffers.

Unfortunately, the town had grown toward the flour mill side of town and toward the train depot and beyond, so that the ornate green Victorian with the gingerbread trim and two balconies sat lonely under the knotted embrace of a grove of ancient cottonwoods, resembling something out of a Grimm storybook.

The house overlooked Silver Lake on the south side—more a slough now than a respectable lake. In November, wild turkeys and pheasants took refuge between the stiff cattails and dry milkweeds dissecting the parchment ice. How many times had she wakened to old Barnabus’s wild spaniel barking, or the bonejarring crack of Gordy’s 16-gauge shotgun shattering the predawn air?

Worse, of course, was when she bolted from the bed, her face to the icy window, as if she might catch her son Nelson out there beside Gordy in the misty dawn, wearing his grandfather’s rabbit shopka, dressed in his brown canvas coveralls, leaning into Gordy’s every word.

Dottie fully blamed the loneliness of this holiday on Gordon Lindholm.

She made out the white pine in her front yard, blowing in the onslaught of the storm. Twenty-plus years it had centered the yard, protected the house from vagabonds who might like a peek into her front windows. Too many branches had turned rusty over the past few years—she would need to prune it to keep it alive.

Hard head stone from the hillside and fields made up a wall that partitioned the main driveway from the Third Street extension. She eased the old International up the hill toward the barn, which served more as a garage for her father’s eccentric collection of cars and electronics. Like the 1929 roadster. Her father had also owned a Packard Clipper, a sedan he’d purchased right before his death. Dottie had shipped it right back to Minneapolis when it arrived, months later.

Her father always did live too extravagantly. Too many big dreams.

She’d inherited that bit from him, she supposed. But she couldn’t blame her father’s peculiarities for the tragedy of her brief marriage.

No, the state of her life, the lonely creak of the barren house, could only be attributed to her own desperate mistakes.

Dottie slid out of the truck, the rain soaking through her wool coat, the mud slopping over her black dress boots as she tramped to the door of the barn and opened it. She drove the truck inside and parked. In the breathy expanse of the barn, the rain stirred the musty smell of forgotten hay, the remnant odors of the horses that once dwelled within, only bony Ollie left to lounge in the corner stall. Her grandfather’s winter carriage sat dusty and abandoned in another stall, age rusting its steel runners, cracking the two leather bench seats.

Dottie checked on the feed for the horse. Someday she should sell the animal. He hadn’t been ridden in years, ornery as an old mule. In fact, only her son had ever been able to cajole the horse into service.

My Side of the Mountain by Jean Craighead George
Barefoot Kisses: A Billionaire Love Story by Lakes, Krista
Husband Stay (Husband #2) by Louise Cusack
Secrets and Seduction: Solacia Cellars by Roberts, Alicia
Anna's Healing by Vannetta Chapman
Lies and Prophecy by Marie Brennan
The Storm's Own Son (Book 3) by Anthony Gillis
Don't Say A Word by Barbara Freethy
The Dream and the Tomb by Robert Payne
A Cowboy's Woman by Cathy Gillen Thacker