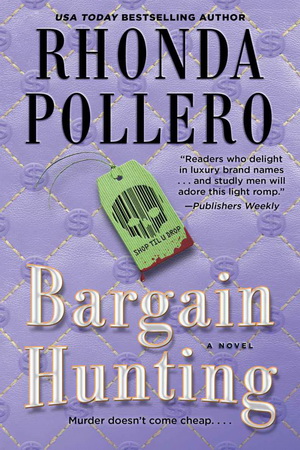 “A fun, fascinating journey you won’t want to miss.”

“A good blend of laughter and mystery. . . . Perfect for a little escape.”

“Will make readers eager for an encore.”

“Stylishly entertaining. . . . Certain to be a runway hit.”

“A great book to curl up with on the beach.”

Thank you for purchasing this Gallery Books eBook.

Sign up for our newsletter and receive special offers, access to bonus content, and info on the latest new releases and other great eBooks from Gallery Books and Simon & Schuster.

For Shirley,
you finally get your wish.

Some mothers are nurturing, others eat their own young.

“You have god-awful taste
in men, Finley.”

This, I mused, from the woman currently trolling for husband number five. Or was it six? I would have fired that shot over the bow, but I knew I was outgunned. My mother was a formidable foe, and for some reason, when I was being called on the carpet, I morphed from a capable twenty-nine-year-old into a timid seventeen-year-old.

“And to think you brought that man to your sister’s wedding. I raised you better than that.”

I nearly choked on my Cobb salad. Raised me? She’d been too busy being Mrs. Somebody-or-Another to bother raising me. I used to tell my friends that I’d been raised by wolves until one of them pointed out that at least wolves show affection by licking their young. My mother wasn’t hardwired for affection. Well, not unless you were my perfect younger sister, Lisa. She’d been perfect as a pediatric oncologist and now she was perfectly
married to the perfect Dr. David Huntington-St. John IV, one of the richest men in Atlanta. Without even trying, Lisa has elevated perfect to the next stratosphere.

Me? I’m a paralegal. My mother sees this as a menial job and never understood why I took my LSATs but never bothered applying to law schools. She doesn’t get that I want a life, not an eighty-hour-a-week job chained to a desk.

“Tony would have been a much more appropriate choice,” she insisted as she chased a bit of grilled mahimahi around on her plate.

“Tony has a fourteen-year-old daughter
and
he’s my boss,” I said, defending myself as I dabbed at the corners of my mouth with my linen napkin. I’d barely eaten a third of my salad, but my churning stomach couldn’t handle another bite.

“You of all people should know that isn’t a problem,” my mother said as she smoothed her perfectly lacquered brown hair. As usual, everything about her was proper and in its right place. She had on a pale yellow Chanel suit with lime green pumps and, unlike every other woman in Florida, stockings. She wore a pretty lime-and-yellow brooch up high on her collarbone. Very Jackie O., which made sense, since my mother fashioned herself after the American icon.

Cassidy Presley Tanner Browning Johnstone Rossi—or whatever the order is—is a stunning woman in her early fifties, though she looks more like forty thanks to early intervention plastic surgery. She was barely twenty-two when I was born. At the time, she was a single mother, a fact I only found out when I was thirteen. Until then, I’d been told that my name was a combination of family names. What went unsaid was that Finley
and Anderson were the surnames of the two men my mother was sleeping with when she got pregnant with me. And yes, that does mean my initials are FAT; and no, there isn’t a joke I haven’t already heard and disliked.

My mother likes to blame me for the premature end to her career as an opera singer at the Met in New York, but in all honesty, she developed nodules on her throat and once they were removed, her voice never fully recovered. Just as she hadn’t fully recovered from my transgression at my sister’s recent society wedding in Atlanta. Only it wasn’t my transgression. Liam McGarrity was the sinner in question. He’d gone out of his way to take potshots at my mother, and while it had been fun at the time, the hour had come for me to shed my pound of flesh.

At least I was shedding in a good place. Sunday lunch at Ironhorse Country Club was lovely. The small restaurant had floor-to-ceiling glass overlooking the manicured golf course beyond. I didn’t give a flaming fig about golf; I just loved the stunning flowers and meticulously kept grassy knolls. Not that we were there for the view—at least not
that
view. My mother had her eye on a cardiologist from the neighborhood, so we’d been lunching at Ironhorse for a while now. Guess it was lucky for Mom that she’d gotten the club membership in one of her lucrative divorce settlements.

“At least do me the courtesy of listening when I speak to you,” she chastised in the quiet but threatening tone I hear mothers use on toddlers at grocery stores.

“I am listening.” Kinda. “But what more can I do than apologize? Which I have done a gazillion times already.”

Her brown eyes narrowed. “You’re sorry I’m upset, but you aren’t sorry for doing what you did. That is the crux of the problem.”

I wanted to throw Liam under the bus. After all, it was his idea to get frisky at the wedding for all to see. It was his idea to exchange verbal barbs with my mother. I was an innocent bystander. Albeit an amused one. “Great-aunt Susan liked Liam,” I offered weakly. My great-aunt didn’t just like him. I think she had a serious crush on him, especially after he’d spirited her around the dance floor a time or two.

Then no wonder you were named for her.
Oh, right, back to the name thing. My mother was born Susan Presley but thought Cassidy was a better stage name so she had it legally changed.

“Would it have killed you to bring Tony Caprelli on the most important day in our family’s life since Lisa graduated,
with honors,
from medical school? And what did you do to your back?”

“I just assumed there was a medical reason for the way you’re slouching.”

Out of habit I snapped into position. “Tony had an emergency that weekend, Mom. Liam or no Liam, he still would have missed the wedding.”

“
That
we could have explained away. But that vulgar man. He made you a spectacle.”

“Since half the bridesmaids were lit and practically giving lap dances by the third hour, I think my one dance paled in comparison.”

Thankfully Philippe came over and asked, “May I take your plates?”

Philippe took both plates and balanced them in one hand and on his forearm. “Shall I bring a dessert menu?”

“No,” my mother countered. Poor Philippe’s face showed he didn’t care for being west of the rock and east of the hard place.

“Tea for me,” my mother corrected.

“When did you start drinking tea?” I asked.

“It’s much better for you. You drink far too much coffee. All that caffeine will eat through your stomach lining.”

My mother slowly shook her head as her collagened lips pursed so she could make some sort of tsking sound. “Must you argue with me over every little thing? One would think you’d be grateful being treated to a nice lunch.”

I noticed that as she criticized me, her attention was drawn over my left shoulder. Discreetly, I dropped my napkin on the floor and as I bent to pick it up, I glanced backward. “I am grateful,” I lied. It wasn’t like she’d invited me to lunch. It was more of a command performance. I could have one foot in the grave and would still jump if she said jump. God, I am such a wuss. “Isn’t that Dr. Chambers who just arrived?”

Yeah, right.
“I thought you were hot for him.”

“Finley Tanner!” she gasped, one hand going to the ever-present strand of pearls at her throat. “I can’t believe you’d be so crass.”

“Sorry. How about, I thought you were intrigued by him.”

“Then he’s right up your alley,” I said into my water glass. Thankfully my mother was busy waving demurely.

About the Boy by Vita, Sharon De
The Ruby Pendant by Nichols, Mary
Shark Lover by Marie, Gracie
So Tempting by Jean Brashear
The Playboy Prince by Nora Roberts
Buried Strangers by Leighton Gage
Running Loose by Chris Crutcher
Broken People by Ioana Visan
An Indecent Death by David Anderson
Tea and Destiny by Sherryl Woods