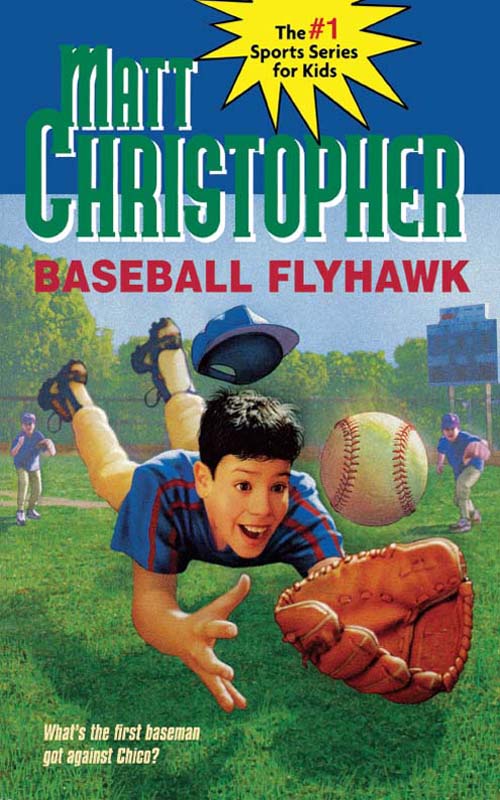 The characters and events in this book are fictitious. Any similarity to real persons, living or dead, is coincidental and
not intended by the author.

T
he score was tied, 4-4, as the Royals came to bat in the top of the fourth inning.

“Buddy! Chico! Dale!” Coach Pete Day named off the first three batters. “Come on! Let’s get a man on! Let’s break this tie!”

Buddy Temple picked up a yellow bat and walked to the plate. Chico Romez selected his favorite brown one, put on a helmet,
and knelt in the on-deck circle. Sweat shone on his face. It was a hot day for the opening game.

But it wasn’t the heat that bothered Chico. He could take the heat. He had been
born in Puerto Rico and had lived there eight years before moving to the United States. And it was always hot in Puerto Rico.

No, it was the way he played baseball that bothered him.

The best way to make people like you, he figured, was to do something that would please them. Chico thought that by playing
good baseball he would make a lot of friends. But so far in this game, he had done nothing to please anybody. Not even himself.

Buddy took a called strike. Then he blasted a single through the pitcher’s box.

The Royals fans cheered and whistled.

“Okay, Chico,” said Coach Day as he rubbed the front of his shirt.

Chico stood at the plate, the bat held over his shoulder. He was short and not too husky. But he was fast. If he laid one
down, he might make it to first.

The Braves’ pitcher toed the rubber and hurled in the ball. It was low, slightly inside. Chico put out his bat.

Tick!
The ball fouled to the backstop screen.

The next pitch was high. Again Chico tried to bunt.

“Hit away, Chico!” said the coach.

Chico rubbed his toes in the dirt and held his hands close to the knob of the bat. He had failed to bunt. Now he just had
to hit.

The tall Braves pitcher stepped on the rubber, looked at Buddy on first, then delivered.

The pitch was high. Chico let it go by.

The next one was in there. Chico swung. A drive over short! Chico dropped his bat and sped to first. Buddy crossed second
base and headed for third.

Chico touched first, then continued on toward second. The ball was bouncing out to left field. He was sure he could make it.
His legs were a blur as he ran.

“Chico!” yelled the first-base coach. “Get back!”

But Chico thought that he had gone too far to turn back now.

The left fielder picked up the ball and pegged it to second. The throw was straight as a string. The second baseman caught
it, put it down quickly in front of the bag, and Chico slid into it.

“Out!” snapped the base umpire.

Chico shook his head, then rose and trotted to the dugout, slapping the dust off his pants.

“One base was enough on that hit, Chico,” said Coach Day. “Shouldn’t have tried to stretch it.”

That was String Becker. Everybody called him String because he was tall and thin. He was the Royals’ first baseman, the most
popular player on the team.

Chico blushed and sat down at the end of the dugout. Making a stupid out like that sure wasn’t going to win him any friends.

C
hico looked at Buddy on third. Well, if he had bunted, he might have got out anyway. And Buddy would now be on second instead
of third.

Catcher Dale Hunt stepped to the plate. He popped to third for the second out.

Frankie Darsi, the Royals’ southpaw pitcher and one of the best in the Grasshopper League, came up and drew a walk. Now the
head of the batting order was up again, shortstop Ray Ward. Ray was small. He couldn’t hit very well. But his first time up,
he had drawn a walk. The second time up, he’d struck out. This time everybody hoped he would walk again.

The Braves’ pitcher threw in two perfect pitches, putting little Ray on the spot. He hit the next one directly at the pitcher,
who threw easily to first for the third out.

The sad look on Ray’s face, though, showed that the words gave him little comfort.

“Hurry in! Hurry out!” snapped the plate umpire.

Frankie walked the first man to face him. String Becker yelled to the infielders to make some noise, and they all began chattering
at once.

A strikeout and two pop-ups ended the Braves’ chance to score.

Center fielder Joe Ellis led off the top half
of the fifth. He grounded out to short. Then Dutch Pierce smacked one out to deep center for a triple, and the fans came to
life.

This was the Royals’ chance to break the tie. String Becker was up.

String threw left and batted left. So far he had blasted a double. His second time up, he had hit a high one to right field
that was caught. It was no wonder now that the fielders shifted to the right and stepped farther back.

Over the fence went the ball for a home run!

The fans stomped their feet on the stands. String crossed home plate, a smile on his
face from ear to ear. Every member of the team was waiting to shake his hand.

“Let’s hold them!” Coach Day yelled to his boys.

Frankie worked hard on the mound. He looked tired. The sweat rolled from his face. He kept wiping it with the sleeve of his
baseball jersey.

The sixth and last inning. Dale Hunt singled. Frankie lined one to short. The ball was scarcely six feet off the ground. The
shortstop caught it, pegged it to first, and Dale was out.

He waited for it to come down. Caught it! One out.

Then Frankie got a little careless, maybe because he was tired. He walked the next man. The next pounded out a single, a Texas
leaguer over second. String called time and walked to the mound. He said something to Frankie, then returned to his position
at first.

The Braves fans were yelling excitedly, trying hard to offer encouragement to their players.

Chico, in left field, felt his heart pounding
hard. With two men on, the Braves could tie the score and go on to win.

A left-hand hitter stepped to the plate. The fielders moved slightly to the right. Frankie pitched.

The batter swung. Bat met ball, and Chico saw the little white pill soar high into the air. It sailed toward left field about
halfway between Chico and the infield!

For a moment he wasn’t sure he would get it. He ran harder. Then he put out his glove, and the ball dropped into it.

“Thataboy, Chico!” He heard String all the way from first.

He ran back to his position.
It’s a good thing I caught that ball,
he thought.

He felt so good about it, he didn’t realize which batter had come to the plate. The Braves’ number one slugger. A right-hand
hitter.

Frankie breezed in a pitch, and the tall Braves hitter smacked it. The ball left the bat as if it were shot from a gun. Chico
could tell instantly that it was going over his head.

He turned around and started running as fast as he could. It wasn’t fast enough. The ball dropped and bounced on. By the time
he picked it up and pegged it in, he was too late.

Chico trotted in from the outfield. He heard someone shout his name, then say things that sank deeply inside him and hurt.

“Where were you playing for that man?
Behind shortstop?” It was String Becker. His face was red with rage.

“I was playing my right position,” murmured Chico.

“Right position, my eye!” shouted String. “You weren’t playing deep at all. If you were playing where you should’ve been,
you would’ve caught that ball easy.”

Chico stared at the others around him. One by one they turned and looked away.

Chico could see they all felt as String did. They blamed him for losing the game.

C
hico,” said Coach Day, “help me put this equipment away, will you?”

They put the catcher’s equipment, the bats, and the balls into the large canvas bag.

“Don’t take to heart what String and the other boys say,” advised the coach. “They don’t really mean it.”

“They just forget themselves for a minute,” said the coach. “They get kind of excited. I’ll talk to them about it.”

“No, Coach. Please. Don’t say anything to them.”

Chico shrugged. The sun shone brightly in his eyes, making him squint. “I don’t want them to think I spoke to you about it.
They — they wouldn’t like that.”

Coach Day smiled. “Okay. If you say so. Want a ride home?”

The coach got into his station wagon and drove off. Chico walked, his glove swinging from his wrist.

He got to thinking about the way String had yelled at him and the way the other boys had looked at him.
Every little mistake I make, they make it sound much worse.

He was walking by Jim’s Ice Cream Shop when a voice from inside yelled to him.

Chico looked through the screen door and saw six or seven members of the Royals sitting at the bar, enjoying sundaes. It was
Buddy Temple who had called to him.

Chico glanced over the faces. He saw String Becker, and that was enough.

“No, thanks!” he said, and started walking faster.

A moment later Buddy was out on the sidewalk, yelling to him. “Chico! Hey, Chico!”

But Chico walked on, not looking back once.

He reached home, went to the back porch, and sat down. His heart pounded as if he’d been running. His forehead was covered
with sweat. He wiped it with his arm.

Then he looked at the glove in his hand and sucked in his breath.

This wasn’t his glove!

He rose to his feet, trembling. Whose glove was it? And what had happened to his?

A lump rose in Chico’s throat. What an opening day this was for him! He had been blamed for the loss of the Royals’ first
game. Now he had come home with somebody else’s glove.

The door behind him opened on squeaking hinges. He turned around. His mother smiled at him.

“Chico! When did you get home?”

“A little while ago,” said Chico. He turned and sat down again, his lower lip quivering.

She came and sat beside him. “Chico, is something wrong?”

He told her about the game, and the glove. Her dark-brown eyes looked at him sadly. She put an arm around his shoulder and
pressed him to her.

“Don’t worry,” his mother said. “You’ll
figure out who owns the glove, and you’ll find yours. It was only a mistake.” She stood up. “Come inside, Chico. You must
be hungry.”

Wolf-Bound: Unfamiliar Territory by Rachel Bo
Edge of Eternity by Ken Follett
The Witch Doctor's Wife by Tamar Myers
Consequences by C.P. Odom
When I Found You by Catherine Ryan Hyde
Sleepwalker by Michael Laimo
What Remains of the Fair Simonetta by Laura T. Emery
Exposed by Liza Marklund
Wherever It Leads by Adriana Locke
lastkingsamazon by Northern, Chris