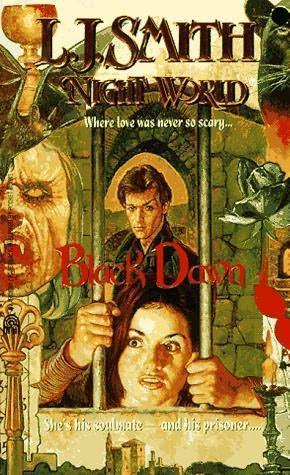 First published in 1997 by Pocket Books
,
a division of Simon
&
Schuster Inc.

a
division of
Hodder
Headline Limited

This edition published in 2002

The right of Lisa J Smith to be identified as
the Author of the Work has been asserted by her
in accordance with the Copyright, Designs and
Patents Act 1988.

All rights reserved. No part of this publication may be
reproduced, stored in a retrieval system, or transmitted,
in any form or by any means without the prior written
permission of the publisher, nor be otherwise circulated
in any form of binding or cover - other than that in which
it is published and without a similar condition being
imposed on the subsequent purchaser.

All characters in this publication are fictitious
and any resemblance to real persons, living or dead
,
is purely coincidental.

Printed and bound in
by
Clays Ltd, St Ives plc

The battle is coming...

The lines are being drawn. The new Night
People are more ruthless and bloodthirsty
than ever before, and they're getting ready to
destroy the human world. But the light has its
champions, too. Four children have been born,
four Wild Powers who can stop the darkness
from winning
...
if they and their
soulmates
can survive.

Romantic horror reaches new heights in these
tales of terror and forbidden love.

The Night World
... love was
never so scary.

The Night World isn't a place. It's all around
us. It's a secret society of vampires, werewolves,
witches, and other creatures of darkness that
live among us. They're beautiful and deadly and irresistible to humans. Your teacher could be one, and so could your boyfriend.

The Night World laws say it's okay to hunt
humans. It's okay to toy with their
hearts,
it's even okay to kill them. There are only two things
you can't do with them.

1) Never let them find out that the Night World exists.

2) Never fall in love with one of them.

These are stories about what happens when the
rules get broken.

For Michael Penny and Matthew Penny

M
aggie Neely woke up to the sound of her mother screaming.

She'd gone to bed as usual, with Jake the Great
Dane sprawled heavily across her feet and the three
cats jockeying for position around her head. Her
cheek was resting on her open geometry book;
there were homework papers scattered among the
blankets, along with fragments of potato chips and
an empty bag. She was wearing her jeans and a
flowered pajama top plus the only two socks she'd
been able to find last night: one red velveteen an
klet and one blue cotton slouch sock.

Those particular socks would eventually mean
the difference between life and death for her, but
at the moment Maggie had no idea of that.

She was simply startled and disoriented from
being wakened suddenly. She'd never heard this
kind of screaming before, and she wondered how
she could be so certain it was her mother doing it.

Something
...
really bad is happening, Maggie
realized slowly.
The worst.

And then before she even realized she was mov
ing, she was lurching across her bedroom floor,
with piles of dirty
clothes and sports equipment
trying to
trip
her up. She banged her shin on a wastebasket in the middle of the room
and
ploughed right on through. The hallway was dim,
but the living room at the end was blazing with
light and the screams were coming from there.

Jake trotted along beside her. When they got to
the foyer by the living room he gave a half growl,
half bark.

Maggie took in the whole scene in a glance. It
was one of those moments when everything
changes forever.

The front door was open, letting in the cold air
of a November night in
. Maggie's fa
ther was wearing a short bathrobe and holding her
mother, who was pulling and tearing at him as if
she were trying to get away, screaming breathlessly
all the while. And in the doorway four people were
standing: two sheriffs, a National Park ranger, and Sylvia Weald.

And knowledge hit her quick and hard
as
a ham
mer
blow
.

My brother is dead, Maggie thought.

Beside her, Jake growled again, but Maggie only heard it distantly. No one else even looked
toward them.

I can't believe how well I'm taking this, Maggie
thought. Something's wrong with me. I'm not hys
terical at all.

Her mind had gotten hold of the idea quite
clearly, but there was no reaction in her body, no
terrible feeling in her stomach. An instant later it
swept over her, exactly what she'd been afraid of.
A wash of adrenaline that made her skin tingle
painfully and a horrible sensation of falling in her
stomach.
A numbness that started in her cheeks
and spread to her lips and jaw.

Oh, please, she thought stupidly. Please let it not
be true. Maybe he's just hurt.
That would be all
right. He had an accident and he's hurt-but not
dead.

But if he were hurt her mother wouldn't be
standing there screaming. She would be on her way
to the hospital, and nobody could stop her. So that
didn't work, and Maggie's mind, darting and wheel
ing like a frightened little animal, had to go back

to
Please don't let this be true.

Strangely, at that moment, it seemed as if there
might be some way to make it not true. If she
turned around and sneaked back to her bedroom
before anyone saw her; if she got into bed and pulled the blankets over her head and shut her
eyes
...

But she couldn't leave her mother screaming like this.

Just then the screams died down a little. Her father was speaking in a voice that didn't sound at all like his voice. It was a sort of choked whisper.
"But why didn't you tell us you were going climb
ing? If you left on Halloween then it's been
six
days.
We didn't even know our son was missing...."

"I'm sorry." Sylvia was whispering, too. "We
didn't expect to be gone long. Miles's roommates
knew we were going, but nobody else. It was just
a spur-of-the-moment thing-we didn't have classes
on Halloween and the weather was so nice and
Miles said, hey, let's
go
out to Chimney Rock. And
we just
went...."

Hey, let's
go.
He used to say that kind of thing to me, Maggie thought with a strange, dazed twinge.
But not since he met Sylvia.

The male sheriff was looking at Maggie's father.
"You weren't surprised that you hadn't heard from
your son since last Friday?"

"No. He's gotten so independent since he moved
out to go to college. One of his roommates called
this afternoon to ask if Miles was here-but he
didn't say that Miles had been gone for almost a
week. I just thought he'd missed a class or
something...." Maggie's father's voice trailed off.

The sheriff nodded. "Apparently his roommates
thought he'd taken a little unauthorized vacation,"
he said. "They got worried enough to call us to
night-but by then a ranger had already picked
up Sylvia."

Sylvia was crying. She was tall but willowy, frag
ile looking.
Delicate.
She had shimmering hair so
pale it was almost silvery and clear eyes the exact
color of wood violets. Maggie, who was short and
round faced, with fox-colored hair and brown eyes,
had always envied her.

But not now.
Nobody could look at Sylvia now
without feeling pity.

"It happened that first evening. We started up,
but then the weather started turning bad and we
turned around. We were moving pretty fast." Sylvia
stopped and pressed a fist against her mouth.

"It's kind of a risky time of year for climbing," the female sheriff began gently, but Sylvia shook
her head.

And she was right, Maggie thought. It wasn't that
bad. Sure, it rained here most of the fall, but some
times what the weather people called a high pres
sure cell settled in and the skies stayed blue for a
month. All hikers knew that.

Besides, Miles wash
t scared of weather. He was
only eighteen but he'd done lots of hard climbs in
's Olympic and Cascade ranges. He'd
keep climbing all winter, getting alpine experience in snow and storms.

Sylvia was going on, her voice getting
more jerky
breathless. "Miles was
...
he'd had the flu a
week before and he wasn't completely over it. But
he seemed okay, strong. It happened when we were
rappelling down. He was laughing and joking and
everything.... I never thought he might be tired
enough to make
a
mistake...." Her voice wavered
turned into a ragged sob and the ranger put
his arm around her.

Something inside Maggie froze.
A
mistake?
Miles?

She was prepared to hear about
a
sudden ava
lanche or a piece of equipment failing.
Even Sylvia
falling and knocking Miles off.
But Miles making
a mistake?

Maggie stared at Sylvia, and suddenly something
in the pitiful figure bothered her.

There was something odd about that delicately
flushed face and those tear-drenched violet eyes. It
was all too perfect, too tragic, as if Sylvia were
an Academy award-winning actress doing a famous
scene-and enjoying it.

"I don't know
how
it happened," Sylvia was whis
pering. "The anchor was good. We should have had
a back-up anchor, but we were in a hurry. And he must have ...
oh, God, there must have been
something wrong with his harness. Maybe the
buckle wasn't fastened right, or the
carabiners
might have been upside
down...:'

Suddenly Maggie's feelings
crystalized
. It was as
if everything came into focus at once.

Miles was too good.
Smart and strong and an
amazing technical climber.
Confident but careful.
Maggie only hoped she'd be that good someday.

No way he'd buckle his harness wrong, or clip his '
biners
upside down. No matter how sick he
was. In fact, no way he'd go without a back-up
anchor.
I'm
the one who tries to do things like that,
and then he yells at me that if I'm not careful I'm
going to have an adventure.

So it meant Sylvia was lying.

The thought came to Maggie on a little wave of
shock. It made her feel as if she were suddenly
speeding backwards, or as if the room were reced
ing from her very fast.

But
why?
Why would Sylvia make up such a terrible story? It didn't make any sense.

With that, a new wave of heat swept over Maggie.
And, strangely, what made her certain of it
was
Sylvia's eyes.

Those violet eyes had been turned down for most
of the time Sylvia had been
talking,
fixed on the
Spanish tiles in the entry hall. But now, as Sylvia
got to the last revelation, they had shifted toward
Maggie.
Toward Maggie's feet.
They fixed there,
slid away, and then came back and stayed.

It made Maggie glance down at her own feet.

My socks.
She's staring at my socks.

One red and one blue-and
she's
noticing that.

Like an actress who's said the same lines often
enough that she doesn't even need to pay attention to them anymore.

All at once, hot anger was burning through Maggie's shock, filling her so there was no room for
anything else. She stared hard at Sylvia,
who
seemed to be very far away but very bright. And in
that same instant she knew for certain.