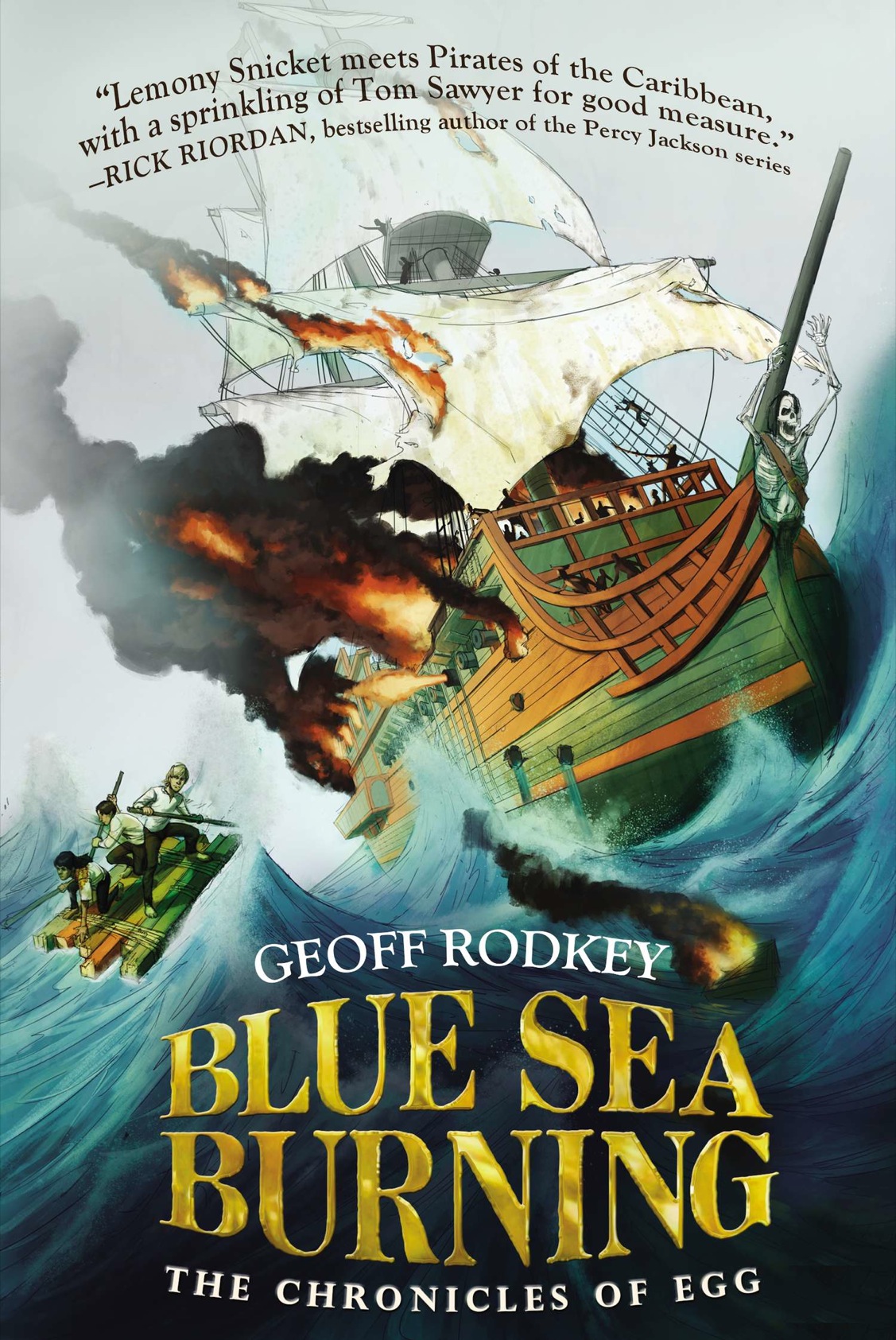 The Chronicles of Egg, Book One:
Deadweather and Sunrise 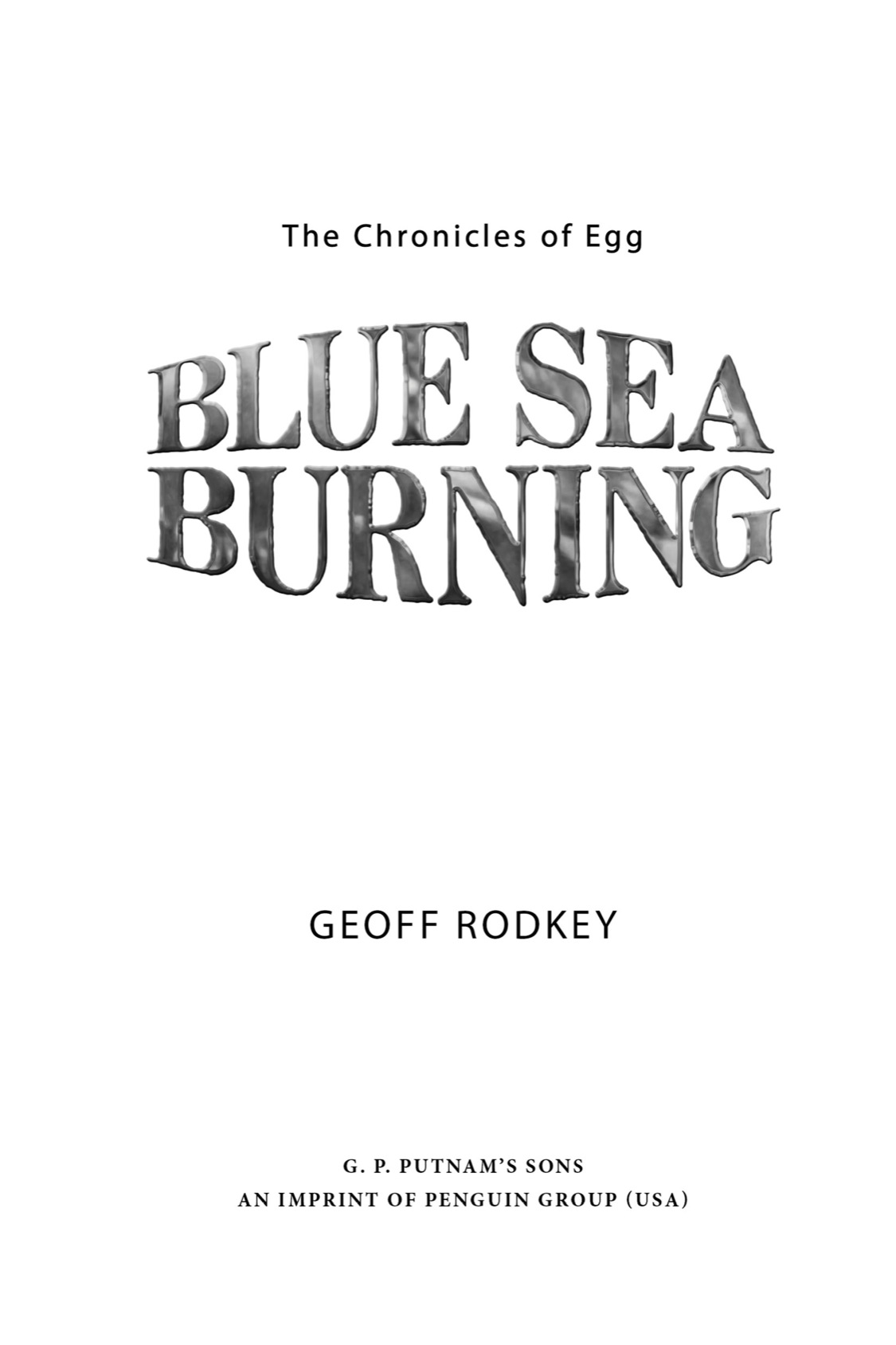 Penguin supports copyright. Copyright fuels creativity, encourages diverse voices, promotes free speech, and creates a vibrant culture. Thank you for buying an authorized edition of this book and for complying with copyright laws by not reproducing, scanning, or distributing any part of it in any form without permission. You are supporting writers and allowing Penguin to continue to publish books for every reader.

Summary: “In this final installment to the Chronicles of Egg trilogy, Egg and his friends must defeat the ruthless slave trader Roger Pembroke”âProvided by publisher.

BURN HEALY'S PIRATE SHIP
was sinking. And we were on it.

Cannon fire had torn a hole in the lower hull during the invasion of Pella Nonna. Healy's men had patched it, but there hadn't been time for a full repair before they set sail with me, Guts, Kira, and my brother, Adonis, on boardâand as soon as the
Grift
hit top speed, the patch had split open. Now seawater was gushing into the hold as fast as the pirates could pump it out, and we were limping across the Blue Sea, trying to reach Deadweather Island for repairs.

But Deadweather was four days' sail away, and if the half-busted patch got any worse, we weren't going to make it.

So that was a problem.

But there was a bigger one.

A convoy of warships was somewhere over the horizon, determined to blow us out of the water.

The convoy was led by Cartage's colonial viceroy,
Li Homaya,
and his temporary ally, the brutal pirate Ripper Jones. Between them, they had at least three ships, including two massive Cartager men-of-war with more than fifty guns each.

Jones and
Li Homaya
were unlikely partners. The only thing they had in common, other than their tiny Cartager ears, was a blood lust for Burn Healy. They'd been roaming the Blue Sea for weeks now, trying to hunt him down, and if they crossed our path before the crippled
Grift
made port, we were doomed.

So that was another problem.

But there was a third one.

And at the moment, it was even bigger than the other two.

The third problem was this: the crew of the
Grift
wanted us dead.

“DEAD?! WHAT THE PUDDAÂ â
blun
are you talking about?” Guts twitched as he cursed at me in two languages at once. Guts had one hand, a foul temper, and an even fouler mouth. And he was my best friend in the world.

He'd sacked out right after we left Pella and was only just waking up from a much-needed nap. So were Kira and Adonisâthe three of them were folding up the hammocks they'd strung under the beams in the aft corner of the
Grift
's gun deck.

“Just look at them,” I said, motioning toward the gun crews behind me. “Do you see the way they're staring at us?”

Guts, Kira, and Adonis peered over my shoulder at the hundred-plus pirates clustered in tight, watchful groups around the two dozen cannon that ran down either side of the deck.

One by one, my friends' eyes widened.

Guts twitched again. “One in the striped shirt looks like he wants toÂ â my
glulo
in the
pudda
â.”

“True, tho',” said Guts, scratching his nose with the stump at the end of his left wrist. “Look at 'im. And them ones on the chain pump are
really
givin' us the stink-eye.”

Halfway down the deck in front of the mainmast column, four sweat-drenched pirates were heaving their shoulders in time as they worked the big circular crank of the chain pump that drew water up from the flooded hold.

I glanced back at them and caught a look of pure hate that turned my insides to water.

Kira's dark eyes flashed as she turned her head to him. “Did you say
girlie
?”

Adonis shrank back in an instant. Like most bullies, my older brother went to pieces when somebody tougher than he was challenged him. Kira was a head shorter and a hundred pounds lighter than Adonis, but she was tougher by a mile.

And I suspected, even though I hadn't seen it happen, that the greenish-black bruise my brother was sporting under his left eye had been Kira's doing.

“No!” Adonis sputtered. “I said-said-said”âhe scrunched up his face in the pained look he got whenever he tried to thinkâ“Â .Â .Â . gurgly.”

Kira ignored him, turning back to me. “Egg, the ship is sinking, and we might be attacked at any minute. That is reason enough for the crew to be angry. Why do you think this is about us?”

“Because this whole mess is my fault,” I said.

And it was true. The only reason the
Grift
had set sail from Pella in such a hurry was because Burn Healy had to rescue me from a public hanging. Which didn't go over well with the man who was trying to hang me.

The man who'd recently crowned himself the new governor of Pella Nonna.

The man who was trying to take over the whole continent of the New Lands and make slaves of everyone who lived there.

The man who'd killed my father.

“It is not your fault, Egg,” Kira insisted. “It is Roger Pembroke's.”

Her lip curled in a snarl as she spoke his name, and I remembered he'd ordered her own father's death as well, for trying to stop Pembroke from using Kira's tribe, the Okalu, as slaves in the silver mine back on Sunrise Island.

“Bunch of nonsense,” Adonis growled again. “Ain't nobody on this ship gonna kill me. My uncle's the captain!”

“He's my uncle, too,” I said. “And I'm plenty worried.” I was still getting used to the idea that I was Burn Healy's nephewâwhich I'd only just learned that morning as I stood on a gallows with a noose around my neck.

It had been an awfully strange day. And it wasn't even time for dinner yet.

“Yer just worried 'cause yer a girâ” Adonis stopped himself, with a sideways glance at Kira. “Gurgly wimp.”

“Thought you were going to start treating me right,” I reminded him. A few hours back, after he'd gone to pieces over our father's death and spilled out all his fears for the future, I'd promised Adonis that I'd stick by him, but only as long as he quit being a bully and a thug.

“It's more than just not slugging me. Quit calling me names! Especially ones that don't mean anything. I mean, what on earth is a âgurgly wimp'?”

It was quiet for a moment as Adonis scrunched up his face, trying to work out what he'd meant by that.

Guts broke the silence. “Don't matter who they blame for this mess,” he said. “They ain't killin' any of us. Not just 'cause the captain's yer uncle. 'Cause of the Code.”

The Code was the set of rules that Burn Healy's pirates had all sworn to live by. And we knew from experience that the Code guaranteed the safety of children.

“Doesn't the Code say children should be treated with mercy?” I asked.

“Well, what if that just means they'll give us a merciful death?”

Nobody said much of anything for a long time after that. We just huddled in the corner of the gun deck, averting our eyes whenever one of the pirates shot a murderous glance in our direction. Between the gushing leak in the hold and the state of alert over a possible attack, the mood was tense all around, and we didn't want to move around the ship for fear of getting in the crew's way.

I thought about searching out my uncle to ask him if there was any chance his men might kill us. But the last time I'd seen him, he was holding a grave and serious-sounding conference with his officers up on the main deck, of the sort that seemed like a very bad idea to interrupt.

And anyway, if I went looking for himâor went anywhere, for that matterâI'd have to walk past a hundred seething pirates. So I stayed put and tried not to think about the fact that I had to pee.

Instead, I thought about Millicent.

Millicent, who was smart and funny and had long, honey-gold hair that shone in the sun like a treasure.

Millicent, whose deep brown eyes had a fire burning fierce inside them.

Millicent, whose smile was warm and mysterious and made life worth living whenever she turned it on me.

Millicent, whose father was Roger Pembroke. The most evil man in the world.

It wasn't her fault. You can't choose your parents.

And she knew it now, all of it, the full horror of what he'd done, and she was as determined as Kira and I were to stop him before he could expand his slave trade from Sunrise Island to the whole of the New Lands.

I hadn't seen Millicent since that awful morningâless than a week ago, but it felt like a yearâin the shadow of Mata Kalun, when my father lay dead on the steps of the temple and our desperate, half-baked plan had fallen apart. Pembroke had split us up, sending Millicent back to her mother on Sunrise Island.

Where was she now? Still on Sunrise, probably. Living at Cloud Manor, waiting for a ship to take her across the Great Maw to Rovia and some boarding school for rich girls.

How could I get to her? Sunrise was Pembroke's island, full of Rovian soldiers who did his bidding. But maybe I couldâ

Adonis's voice cut through my thoughts. I looked up to see that the gun crews were eating dinner. A man from each crew had brought up a bucket of rations from the galley down on the lower deck, and they were all seated around their cannon, digging into biscuits and salted chops.

Watching the pirates eat, my mouth started to water. It had been a long time since breakfast.

Adonis got to his feet. “Gonna get us a bucket.”

He started off down the deck with his usual swaggerâthe kind that made even strangers want to give him a hard kick in the pants. Guts, Kira, and I watched the pirates stare daggers at him as he passed.

“Think he's going to get himself in trouble?” I asked the others.

Kira sighed. “I am sure he will.” She stood up. “We should follow him.”

Unfortunately, I had to agree.