Read Bookless in Baghdad: Reflections on Writing and Writers Online

Bookless in Baghdad: Reflections on Writing and Writers 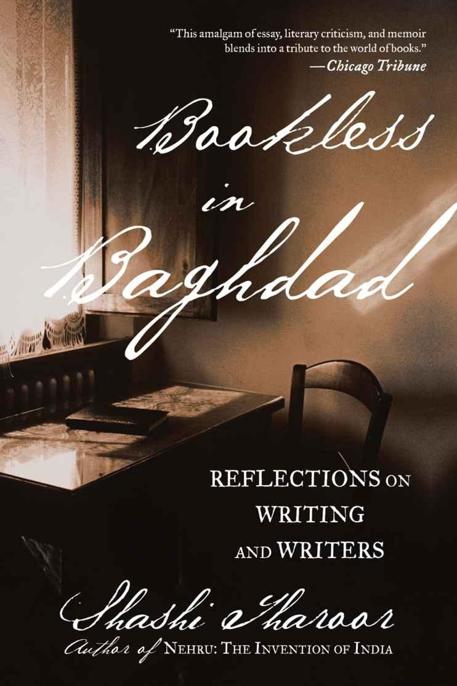 India: From Midnight to the Millennium
The Elephant, the Tiger, and the Cell Phone
Nehru: The Invention of India

All Rights Reserved. No part of this book may be reproduced in any manner without the express written consent of the publisher, except in the case of brief excerpts in critical reviews or articles. All inquiries should be addressed to Arcade Publishing, 307 West 36th Street, 11th Floor, New York, NY 10018.

Arcade Publishing® is a registered trademark of Skyhorse Publishing, Inc.®, a Delaware corporation.

The essays collected in this book have appeared, in slightly different form, in the following publications: the
New York Times Book Review
, the
Washington Post
, the
Washington Post Book World
,
Indian Express
,
Hindu
,
Seminar
,
India Today Plus
,
World Policy Journal
,
International Herald Tribune
, and
Newsweek International
. They have been revised, updated, and edited for inclusion in this volume Permission to reproduce previously published material is gratefully acknowledged.

Library of Congress Cataloging-in-Publication Data is available on file.

1. Growing Up with Books in India

3. Mining the Mahabharata: Whose Culture Is It Anyway?

4. In Defense of the Bollywood Novel

5. A Novel of Collisions

10. The Spy Who Stayed Out in the Cold

16. Salman Rushdie: The Ground beneath His Feet

22. Bharatiya Sanskriti in the Big Apple

23. The Poets of Protocol

24. The Critic as Cosmetologist

25. The Cultural Geography of Criticism

26. How Not to Deal with a Bad Review

27. Elegy for a Literary Monument

28. Why the Yeti Brings Hope to a Land without Snow

29. How
Riot
Nearly Caused a Riot

31. From the Bathtub to Bollywood

32. For Whom the Bill Tolls

33. The Rise of the Political Litterateur

36. Quotes of Many Colors

37. The Pornography of Poverty?

39. Globalization and the Human Imagination

40. The Anxiety of Audience

O
VER THE YEARS I HAVE FOUND MYSELF
expressing opinions on a host of subjects, in the op-ed pages of an assortment of newspapers around the world and as a fortnightly columnist, initially for the
Indian Express
and, since April 2001, for the
Hindu
. My pieces have ranged eclectically from cricket to politics and from Indian history to the challenges facing the United Nations. And many of them, inevitably, have dealt with matters literary.

Bookless in Baghdad
is a collection of forty of my essays on literary topics, which have appeared in a variety of publications over the past decade. They span a broad range of concerns emerging from my own experience as an Indian writer (and reader!), but they share a literary provenance: none of my writings on nonliterary subjects have been included. All the essays have been written for the layperson rather than the academic specialist. They vary in length and tone depending on the publication for which they were first written, and though many have been revised and updated to see the light of day in 2005, I have not altered the views or judgments they originally contained.

Though I have reviewed many books, including several
Indian novels, I have not included any of my book reviews in this collection. Rather, this volume seeks to assemble my ruminations on aspects of the literary experience that go beyond any single book. I hope that these essays will prove illuminating at times and provocative at others, and above all that they will impart something of the pleasure that the acts of reading and writing have always given me. To me, books are like the toddy tapper's hatchet, striking through the rough husk that enshrouds our minds to tap into the exhilaration that ferments within.

More than a century ago, Walter Pater wrote of art as “professing frankly to give nothing but the highest quality to your moments as they pass.” That may be all that reading offers; but it is no modest aspiration.

I
Inspirations
1
Growing Up with Books in India

G
ROWING UP AS THE CHILD
of middle-class parents in urban India in the late 1950s and ’60s meant growing up with books. Television did not exist in the Bombay of my boyhood, and Nintendo (let alone the personal computer) was not even a gleam in an inventor's eye. If your siblings were, as in my case, four and six years younger (and worse, female), there was only one thing to do when you weren't with your friends. Read.

I read copiously, rapidly, and indiscriminately. Chronic asthma often confined me to bed, but I found so much pleasure in the books piled up by my bedside that I stopped resenting my illness. Soon reading became the central focus of my existence; there was not a day in my childhood that did not feature a book, or several. One year I kept a list of the volumes I'd finished (comics didn't count), hoping to reach 365 before the calendar did. I made it before Christmas.

An abiding memory is of my mother coming into my room around eleven every night and switching off the light.
I wasn't smart enough to think of holding a flashlight under the covers, but sometimes I would wait for my parents to fall asleep in their room, then surreptitiously switch my light on again to finish the book they'd interrupted.

It was, of course, my mother who'd started me off on the bad habit to begin with. When I was still in diapers, she would read to me from the Noddy books of Enid Blyton, stories about a nodding wooden doll and his friends in Toy-land. My mother jokes that she read them so badly, I couldn't wait to grab the books from her myself; by the time I was three I was reading Noddy, and soon moving on to other stories by Blyton, easily the world's most prolific children's author, whose prodigious output (over two hundred books) could take you through an entire childhood. When I outgrew Noddy, there were Enid Blyton fairy tales, nursery fantasies, and retold legends; by seven I started on her thrilling mysteries of the Five-Find-Outers (and Dog); by eight I discovered her tales of British boarding-school life, midnight feasts and all; by nine I was launched on the adventures of the “Famous Five” and of four intrepid British teenagers in another series that always had the word
adventure
in its titles (
The Ship of Adventure, The Castle of Adventure,
and so on). Today, Enid Blyton has become the target of well-intentioned but overearnest revisionists, her stories assailed for racism, sexism, and overall political incorrectness. But my postcolonial generation (and today's Indians too) read her books entranced by her extraordinary storytelling skills and quite indulgent of her stereotypes. After two hundred years of the Raj, Indian children know instinctively
how to filter the foreign — to appreciate the best in things British, and not to take the rest seriously.

She's Leaving Home by William Shaw
The Scent (The Bryn and Sinjin Series Book 2) by H.P. Mallory
Graduating (Covenant College Book 5) by Amanda M. Lee
Hands-On Training by Paige Tyler
All American Boys by Jason Reynolds
Someone Special by Katie Flynn
Three Stages of Love: Attraction by T. Anthony
Charges by Stephen Knight
A Billionaire for Christmas by Maggie Marr
Clarissa Harlowe; or the history of a young lady — Volume 3 by Samuel Richardson