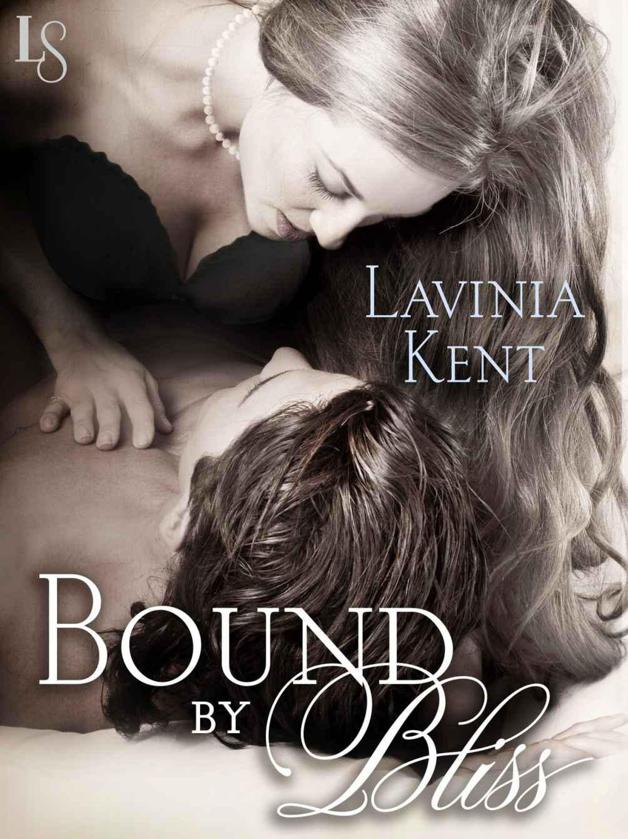 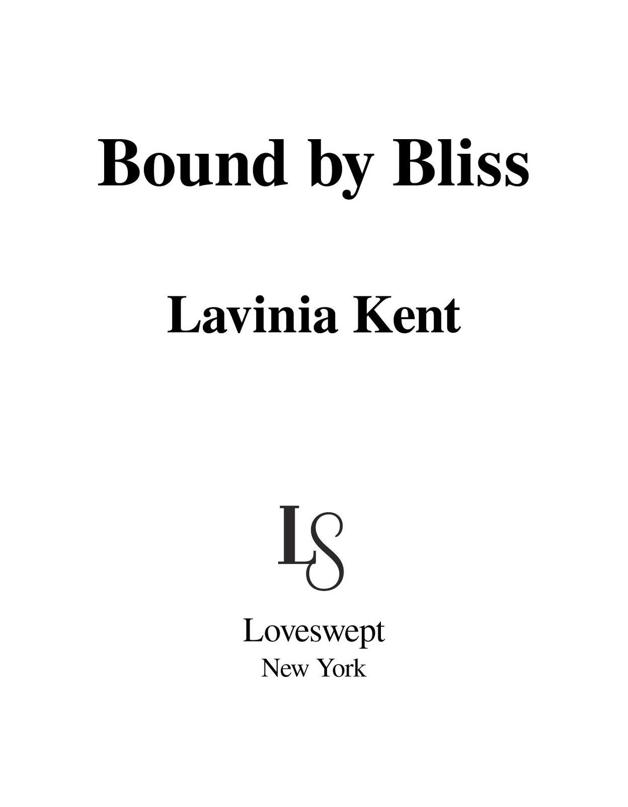 Bound by Bliss
is a work of fiction. Names, places, and incidents either are products of the author’s imagination or are used fictitiously. Any resemblance to actual events, locales, or persons, living or dead, is entirely coincidental.

L
OVESWEPT
is a registered trademark and the L
OVESWEPT
colophon is a trademark of Random House LLC.

“There’s a lady to see you, Madame,” Mr. Simms, the porter, said after a brief tap on the parlor door.

“A lady?” Ruby, Madame Rouge, lifted her head from the sealed letter she’d been examining and stared at the door, not really seeing anything as she cleared her thoughts. “A lady?” she repeated.

The last lady, Lady Brookingston, to call upon Ruby had led to adventure and matrimony—for the lady, not Ruby. She was not at all sure that she wished to have another such visit. Ladies did not come to call upon Ruby very often and she rather thought she liked it that way. A brothel was not the place for ladies. Their visits were always messy and normally involved odd and difficult requests that she had no wish to fulfill. It was true that sometimes ladies of particular needs made use of some of the more unusual upstairs rooms along with their desired partners, but they rarely called upon her first. The matters were handled strictly as business.

“Please tell her that I am not receiving visitors.”

Simms paled a little, but retreated.

Ruby bent her head back to the missive from Manchester. She really should open it. There must be a reason that he was writing her after all these months. Even without ever having seen his writing, she knew it was from him. Her index finger traced the sealing wax and then dropped again to the table. Something so simple should not be so difficult. It was only a letter, a letter from a man she’d known barely a day.

A tap. Simms reappeared. “The lady said to tell you that Lady Perse is calling and she will not be turned away.”

It was Ruby’s turn to pale. Hand shaking slightly, she focused on the cup of tea, which sat unfinished upon her desk. Picking up the rapidly cooling beverage, she took a large sip.

Madame took another gulp of the tea.

It had been strange enough when Louisa Brookingston—now Lady Swanston, the widow of one of her clients—had sought her out. Having Lady Perse visit was beyond any dream—or nightmare—she had ever imagined.

“Give me a moment and then send her in.” There was clearly no way to get rid of the lady other than meeting with her if half of what she’d heard was true. “And have a fresh pot of tea and another cup brought in—and cherry tarts.”

She’d hardly finished the words before Lady Perse stalked into the room. Or, at least, she assumed it was Lady Perse. It was hard to tell beneath the heavy veiling. Lady Brookingston had also come veiled, but her light covering in no way compared to the heavy pile of black draping that confronted her now.

“You know who I am?” The lady spoke without bothering with introduction.

“Good.” Without another word, the woman pulled off her veils and dropped them on the settee, revealing a very narrow figure beneath the most amazing head of hair Ruby had ever seen. It was as if someone had set a very large puff of swan’s down upon her head.

What did one say to that? “May I offer you some refreshment?” she said, gesturing to a comfortable chair.

Lady Perse stared at the chair a moment, her nose wrinkling slightly, and then sat on the very edge. “Tea. You do have tea? I am not quite sure what to expect in such a place.”

Ruby straightened in her chair, imitating Lady Perse’s straight posture. “Yes, I have tea. It will be here in a moment.”

Lady Perse pulled a fan from her reticule and vigorously waved it in the air. “Those veils are quite stifling. I will have to be sure my dear Lord Perse lives a long life. I could not bear to wear them daily.”

Ruby merely nodded. It was important to find out why Lady Perse was calling. “And how may I help you? I assume there is a reason for your call.” There were times when it was best to be direct.

Lady Perse removed her gloves. “I need to talk to you about my nephew.”

“Your nephew? I was not aware you had a nephew.” And Ruby knew all about Lady Perse’s relations.

Duldon. That explained much. Her mind flashed to the tall stiff man with the startling eyes, dark gold curls, and a face that rarely smiled, but when it did…Yes, Ruby could understand why there might be questions in regard to Lord Duldon. He had been a frequent visitor over the years, a visitor of very particular tastes. “I rarely speak of patrons—assuming he even is one of my guests. What exactly would you like to know?” she asked.

Lady Perse shut her lips tight for a moment. It was clear she did not wish to say the words she knew she must. She glanced down at her hands for a moment and then raised her eyes to Ruby. “I have heard certain rumors about the boy. Rumors that he has rather unusual tastes. Rumors I would expect you to know the truth of.”

Ruby would never have referred to Duldon as a boy. The man was well over six foot and could out-glare the best of them. “I really cannot speak of such things.” And that was true. What a patron did was always held in the highest of confidences. And she certainly could not imagine discussing Duldon’s preferences with Lady Perse.

Lady Perse’s lips grew thin. “I think that is all the answer I need. You do not deny that you have ever met the man or know who he is?”

Ruby said nothing. It was too late to pretend ignorance, not that it would have been believable if she had.

“I was afraid that was the case. The rumors I’ve heard must be true. The boy is over thirty and needs a wife. This makes the business most difficult. My expertise is not great in such matters.”

“Even if Lord Duldon were…to be a man of certain tastes, these matters usually do not influence marriage. I believe that most men, most lords, know how to separate entertainment from duty.”

“Duldon does not seem to. It’s far past the time he should have taken care of an heir. He’s the last of the line and—”

“Well, I am not,” Lady Perse cut her off. “And besides I do want the boy to be happy. I don’t want him to have to separate his life into pieces. If he likes certain things surely he would be happier if his wife could provide them. I do not like to think of men straying after their vows are said.”

Now that was an unusual view. “You mean men like my father.” Ruby raised her eyes and stared straight at Lady Perse.

Lady Perse met the stare and did not blink. “Yes, my brother would have been far better off had he married for something other than land and lineage. Duldon has spoken of marrying some chit—Bliss Danser, if rumor is correct—for land as well. I will not have it. I will do all I can to prevent such a match. The girl may be perfectly acceptable, but I want something more for him, someone who stirs his passions, not some sweet innocent.”

Ruby tried hard to concentrate on the continuing words, distracted by the fact that Lady Perse had subtly agreed that Ruby’s father and Lady Perse’s brother were one and the same. She shook her head, feeling her heavy red wig shift upon her scalp, forcing herself to the matter at hand. “So what do you want me to do? If he wishes to marry her he must find her pleasing,” she said, trying to remember all she had heard of Lady Bliss. Hadn’t she even seen the girl once? She’d been involved in the adventures of Swanston and Lady Brookingston. She was Swanston’s sister, but hadn’t she been in the company of the Countess Ormande? If that was true then…The Countess had been a woman of very particular and not particularly nice tastes herself. Ruby had needed to bar her from the house when she’d begun to play with unwilling partners—and that was before Swanston had forced her to exile in Scotland with her dour husband. If Lady Bliss had been often in the Countess’s company it was unlikely she was as innocent as Lady Perse believed. Ruby could look into that, find out what the truth about the girl was.

Lady Perse lifted her head and locked glances with Ruby. “I want you to help me find Duldon a wife. I want you to decide which young lady will suit his tastes—and needs. I want him to have a wife who will suit his every need, whatever those needs may be.”

Lady Bliss Danser, second daughter of the Duke of Mirth, stared across the ballroom, her eyes fixed on the smiling blonde. The girl bounced up on her tiptoes, curls bobbing and the sunset ruffles of her skirt dancing. Her whole being radiated joy and happiness.

Bliss bit down on her lower lip. Hard. Her sharp incisors cut into the delicate skin, the pain holding her in the moment as it always did, keeping her firmly in the present. It was wrong to be miserable at another’s jubilation, but it was impossible to feel pleasure as the stones filling her belly multiplied. If Miss Amy Samson had received an invitation that meant there was one less to go around, one less chance at salvation.

Teen Idol by Meg Cabot
Divided by Elsie Chapman
Our Souls at Night by Kent Haruf
Close Relations by Deborah Moggach
Hellfire Part Two by Masters, Robyn
My Life With Deth by David Ellefson
After All by Jolene Betty Perry
The Making of the Lamb by Bear, Robert
THE BLACK ALBUM: A Hollywood Horror Story by Carlton Kenneth Holder
Analog SFF, April 2010 by Dell Magazine Authors