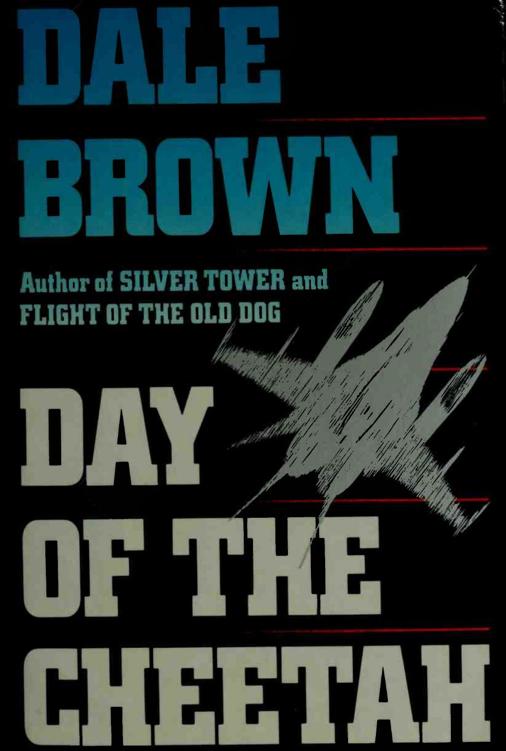 DALE
BROWN DAY OF THE CHEETAH

Americas
most advanced weapon—a top-secret fighter whose guidance systems can literally
merge with the pilots mind—a highly placed deep-cover KGB mole, unparalleled
aerial combat scenes and a stunning appearance by the upgraded Old Dog
itself—these are the elements that illuminate Dale Browns explosive new
high-flying adventure,
Day of the
Cheetah,
certain to eclipse the spectacular success of his previous
bestsellers,
Flight of the Old Dog
and
Silver Tower.

It
is 1996. The U.S. Air Force begins the operational testing phase of its new
XF-34 fighter, nicknamed DreamStar. at the High Technology'
Advanced
Weapons
Center
in the
Nevada
desert. DreamStar possesses what is
potentially the ultimate edge: ANTARES, a piloting system that creates a unique
symbiosis between man and machine, responding directly to the pilots thought
commands and issuing ones of its own.

But
it takes a special kind of man to manage ANTARES’ terrifying and potentially
traumatic effects on the nervous system and f ly the XF-34...a superbly
conditioned person with the physical and mental tolerance to control a flying
bomb at Mach 2.

Captain
Kenneth Francis James is that man—the best combat test pilot in the Air Force
and apparently the only one with the ability to fly DreamStar. But Captain Ken
James is also Andrei Maraklov, a deep-planted KCB mole ordered to steal
DreamStar.
(Continued on hack flap)

DAY OF THE CHEETAH

All
rights reserved, including the right of reproduction in whole or in part in any
form. Published in the
United States of America
by Donald I. Fine, Inc. and in
Canada
by General Publishing Company Limited.

Manufactured
in the
United States of America

This
novel is a work of fiction. Names, characters, places and incidents are either
the product of the author’s imagination or are used fictitiously. Any
resemblance to actual events, locales, organizations or persons, living or dead,
is entirely coincidental and beyond the intent of either the author or
publisher.

Space
prohibits me from mentioning each of the fine persons of ASD that I had the
pleasure of meeting, but I would like to thank Lt. General William E. Thurman,
commander of ASD, for allowing me the privilege of a visit; to Lt. Col. George
H. Peck, Helen Cavanaugh, Capt. Brian Hoey, Jo Ann Rumple, and Capt. Jamie
Scearse of the Office of Public Affairs for arranging my visit and escorting me
through the myriad of offices and labs; Captain Myers N. Drew, AFTI/F-16 Program
Manager, from the Flight Dynamics Laboratories, who showed me how a fighter
could really fly sideways; Mr. James Pruner, X-29 Program Director; Mr. Ron
DeCamp, mission- adaptive wing (MAW) Program Director; Mr. James Kocher,
Integrated Close Air Support System (ICASS) Program Director, all of the Flight
Dynamics Laboratory, Wright Aeronautical Laboratories; and a special thanks to
Dr. Wayne L. Martin, acting chief of the Visual Displays System Branch of the
Armstrong Aerospace Medical Research Laboratory, for allowing me to try out
some of the incredible “Buck Rogers” supercockpit systems that our fighter
pilots will be using five to ten years from now. I hope I have done credit to
the time you extended to me.

Thanks
to Dennis T. Hall for helping arrange research trips and interviews. It’s great
having you on the team.

A
special thanks to George Wieser, who helped me to focus in on the real story
behind
Cheetah,
and to Donald I.
Fine, editor as well as publisher, for sharing his experience and talent with
me.

Day of the Cheetah
is dedicated to two
very special people that helped me over the years:

To
my grandmother, Ruby Normandin, for her warmth and vitality, her charm and
humor, for her patience when I was little and her pride now that I’m not so
little. I’m happy to let the whole world know what kind of person you are and
how much I love you.

To
my uncle, Leo Brown, a very special dedication. I took a lot of your time, your
talent, and your patience—I even took your name. I wish I had taken the time to
say Thank You.

AEROFLOT
—The national airline of the
Soviet Union
. Aeroflot has a major role in the
Soviet Union
’s military strategy and planning—all
Aeroflot aircraft can be expected to serve under military command in wartime.

AFTERBURNER
—A throttle setting in a
high-performance jet engine where extra fuel is sprayed into an engine chamber
to increase thrust. The use of afterburner increases the rate of fuel
consumption by 500% but can double or triple the engine’s thrust.

AGL—Above
Ground Level. The actual distance between the aircraft’s belly and the ground.
Usually measured by a radar altimeter.

AGM-88
HARM—HARM stands for High-speed Anti-Radiation Missile. The AGM-88 is an
air-launched anti-radar missile built by Texas Instruments, Inc., that homes in
on enemy ground or ship radars and destroys them from ranges as far as ten
miles.

AGM-130—An
air-launched rocket-powered glide bomb built by Rockwell International. Guided
by infrared or TV camera, by manual data-link guidance or automatic target
lock-on, it has a two- thousand-pound high-explosive warhead and can glide for
two to five miles, even when launched from very low altitude.

AGM-132C
Tacit Rainbow
—An air-launched winged
drone antiradar missile built by Boeing Aircraft. The missile can be
pre-programmed for certain enemy radars and launched from long distances. The
missile will cruise to and then orbit the target area until an enemy radar
comes up, then home in on it and destroy it.

AIM-9R
Sidewinder
—Primary
U.S.
heat-seeking air-to-air missile, built by
Raytheon Company and Ford Aerospace. It has a speed of over Mach two (twice the
speed of sound) and a range of more than ten miles.

AIM-120C
AMRAAM—Advanced Medium-Range Air-to-Air Missile, a radar-guided missile built
by Hughes Aircraft and Raytheon. The AIM-120 has its own radar seeker in its
nosecone—unlike other radar- guided missiles, the AIM-120 does not need
guidance signals from the launch aircraft to home in on its target. It has a
top speed of over Mach four.

airway
—Pre-planned routes to be
followed by large or commercial aircraft entering, leaving or flying within the
United States under positive control. Three kinds: “A” routes (from foreign or
overwater points), “V” (for low altitude), or “J” (for higher-altitude
aircraft).

alpha
—Stands for “angle of attack,” the
angle, measured in degrees, between the wind hitting an aircraft’s wing and the
angle of the wing itself. A plane exceeding a certain angle of attack will
stall (cease to fly). Most high-performance aircraft cannot fly at more than
eighteen to twenty alpha, but advanced fighters will be designed to fly and
attack at well over fifty alpha.

ANTARES
(fictional)
—Advanced Neural Transfer
and Response System. A method for digitizing and transmitting neural impulses
from the human body to a computer, and vice versa.

ATF—Advanced
Tactical Fighter. A program developed to specify, design and build the next
generation of fighter aircraft, beginning in the year 1992 and continue well
into the twenty-first century. The ATF (X-22 or X-23) will use non-metallic
materials in its construction, rely heavily on artificial intelligence and
advanced computer graphics in the cockpit, fly in unconventional ways, fly at
supersonic speeds without afterburner, and takeoff and land on a fifteen-hundred-foot-
long runway.

AWACS—Airborne
Warning And Control System. An aircraft- mounted radar that can scan for
aircraft at any altitude out to two hundred miles and control air-to-air
intercepts and engagements with enemy forces with a wide array of communications
equipment.

BUS
—In electronics, the point at which
power is supplied to numerous other circuits.

C-21B—The
military version of the Gates Learjet 35A, it is a ten- person fast airlift jet
used by the U.S. Air Force. Can be used for up to eight passengers, three
thousand pounds of cargo, or in aeromedi- cal evacuation role.

CANARDS
—Movable fins or stabilizers
mounted on the front of an aircraft to provide additional lift, turning power,
or supplement performance of the main wings.

CAP—Combat
Air Patrol. Arranging fighters in a defensive or offensive role at various
altitudes and configurations to counter an enemy threat.

Cayman
Islands
—A
small chain of islands southwest of
Cuba
in the
Caribbean Sea
, self-governed but administered by the
British government.

CBU—Cluster
Bomb Unit. A canister carried by a fighter or bomber that dispenses small
bomblets over wide areas. Used against columns of troops, parked aircraft, or
lightly armored vehicles.

CHAFF
—small pieces of metal, like
tinsel, that reflect radar energy and act as a decoy to enemy radars or
radar-guided missiles.

COMPOSITE
—A material made from metallic and non-metallic substances
to increase the material’s strength without adding weight.

CV-22
OSPREY—A
special tilt-rotor aircraft built by Boeing and Bell Helicopter
that uses two movable rotors to take off and land like a helicopter but flys
like a regular airplane.

DIA—Defense
Intelligence Agency. A special Pentagon unit that conducts investigations for
personnel security clearances and coordinates intelligence gathering, analysis
and dissemination for the Department of Defense.

Dreamland
—Unclassified nickname for the
restricted military airspace in south-central
Nevada
used by the Departments of Defense and
Energy and the Central Intelligence Agency for special weapons research.

E-3B
SENTRY
—Modified Boeing 707-320B
airliner with a thirty-foot diameter rotating saucer radome mounted atop the
fuselage, plus extensive computer displays and communications systems. Primary
U.S.
and western reconnaissance, command and
control system. Can track hundreds of aircraft and ships at any altitude. Can
fly one thousand miles to and from a patrol area and then stay on patrol for
six hours.

FAST
PACK—Fuel Armament Storage Tank Packs. Smoothly curved conformal tanks fitted
to the upper side fuselages of F-15 fighters to allow them to carry extra fuel
and equipment without a significant drag penalty.

Fox
One
—Call made by an attacking
fighter to friendly forces to warn of a radar-guided missile launch.

G—Measurement
of gravitational forces imposed on something. One G is normal gravity (weight);
two G’s is two times normal weight, etc. Zero G is weightlessness. Negative G’s
cause reversal of normal fluid motion in blood vessels or aircraft fuel
systems. A trained human being can withstand as much as six positive G’s before
experiencing gray- or blackout, or as much as negative-three G’s before
red-out. Excessive G’s (positive or negative) cause unconsciousness.

GEOSTATIONARY ORBIT
—An orbit of a
satellite approximately 22,300 miles above Earth, where the time for the
satellite to orbit the Earth is equal to the Earth’s rotation. If the satellite
is placed above the equator, the satellite will seem to hang motionless in
space over the same point on Earth.

GRAY-OUT
—Condition during high-G
maneuvering where blood is forced out of the brain, causing a gradual loss, darkening,
or tunneling of vision. Excessive G’s cause complete gray-out (blackout) and
unconsciousness.