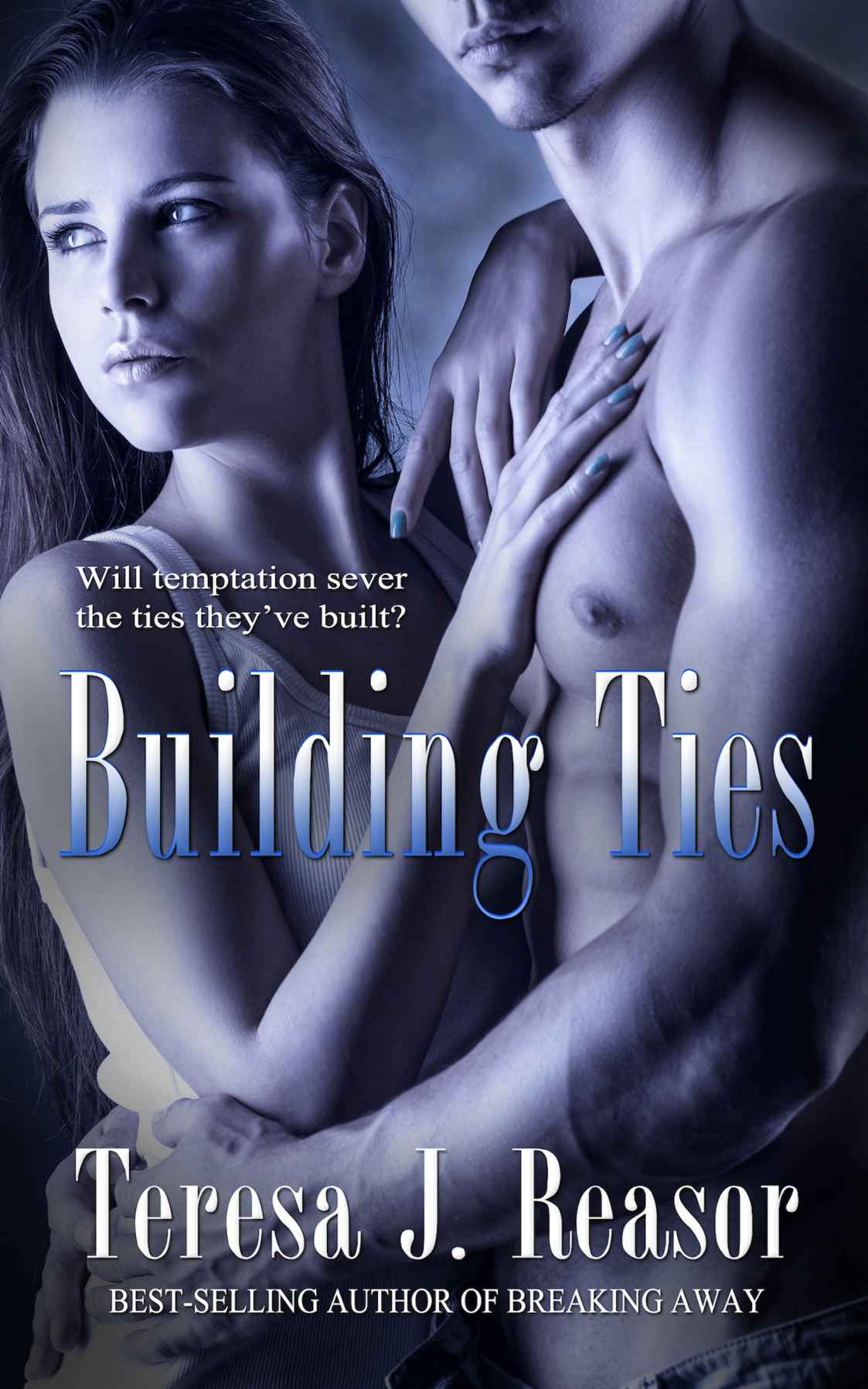 Book 4 of the
A SEAL TEAM HEARTBREAKERS

This is a work of fiction. Names, characters, places and incidents are the product of the author’s imagination or are used fictitiously, and any resemblance to actual persons living or dead, business establishments, events, or locales is entirely coincidental.

All rights reserved. No part of this book may be used or reproduced in any manner whatsoever without written permission from the author, except in the case of brief quotations embodied in critical articles or reviews.

To all those wonderful people who keep the home fires burning.

Connect with the Author

M
ary Stubben was
scared. Really scared. Tess Kelly didn’t need any special reporter skills to recognize it. Mary’s hands shook visibly as she spiraled her napkin into a thin tube. Twisted shreds of paper littered the small table in front of her.

Tess had done her usual quick character study, and nothing about Mary’s appearance, demeanor, or background even hinted that she was an attention-seeker. In fact, just the opposite. Her beige blouse and skirt did nothing to enhance her petite figure and the neutral shade leached the color from her fair skin. Her medium brown hair tucked under her chin like a brown football helmet, and her face was as clean of makeup as a five-year-old’s.

Despite her mousy appearance, this soft-spoken, nondescript secretary knew everything about what went on in the office of Chanter Construction, and she wanted to talk about her suspicions.

During their phone conversation the night before, Tess had noted the fear in Mary’s voice, so she chose a time when the downtown San Diego Café Curiosite’ would be less busy, so they could talk freely. Hoping to make Mary more comfortable, she’d selected a table to one side of the restaurant, hidden from direct view of anyone coming in the front door. It hadn’t helped. The woman was so shut down, so frightened, the charming atmosphere of the unique Café—its glass-fronted display cabinets full of antique jewelry and knickknacks, the eclectic, oddball furniture—was completely lost on her.

A waitress swung by their table, scooped up the shredded paper, asked if they needed anything else and dropped a fresh stack of napkins next to them.

Tess waited for her to wander away before asking, “Was Mr. Frye aware of how many bids they were competing against for the Ellison project?”

“Yes. Thirteen.” Mary stirred her cold coffee but didn’t attempt to drink any. “But he knew their stiffest competition was Hamilton Construction and the Brittain Development Corporation.”

“How did he plan to outbid them?” Tess asked.

“He couldn’t afford to undercut them. He could only propose an amount equal to Hamilton’s or Brittain’s. No one but the planning commission knew what the bids were, because they were sealed and confidential. But they did release the names of the corporations who were competing.”

“So he knew who his competition was, but not how much they bid, no details of their proposals?”

“Well, he wasn’t supposed to.” Mary scrubbed at an imaginary spill on the table. “Somehow he found out how much the bids were. I heard him talking to Mr. Sullivan.”

Tess drew a quick breath. Who in the planning commission had he paid off? “When was this?”

“A month ago. When Mr. Sullivan started coming around the office.”

“Henry Sullivan. He says he’s a private detective, and he may be, but there’s something about him that raises the hair on the back of my neck when he looks at me.”

“They went into Mr. Frye’s office and stayed in there a long time. When Mr. Sullivan left, there was a look about him. He seemed excited.”

“When did you find the report?”

“Two weeks later, just before the accident at one of the Brittain Construction sites.”

“You said you were going to bring me a copy of the dossier.”

Mary bit her lip. “It’s an investigative report on Hamilton and Brittain.” Mary started folding a fresh napkin into smaller and smaller squares. “Mr. Sullivan found out Mr. Hamilton was having an affair with one of the girls in his office. There are explicit photos of them in the file. I think he’s dropped out of the bidding now. But there wasn’t any dirt on Mr. Brittain.”

Tess covered Mary’s hand. “Do you believe Frye had something to do with the accident, Mary?”

“I’m afraid he did. But I didn’t find anything in the office to prove it.”

Tess caught her breath. The woman had put herself in a dangerous position. If her suspicions were correct, she could lose her job, but also, if Frye was as ruthless as she described, she could be in physical danger as well.

Mary withdrew her hand from Tess’s and rifled through her purse. She pulled out a small flash drive shaped like a rubber bracelet with a logo on it and slid it across the table. “I know Mr. Frye’s computer password and copied this information one morning before he came into the office.”

Tess’s heart skipped a couple of beats. Hopefully Mary had covered her tracks. “Why haven’t you gone to the police, Mary?”

“And tell them what? I suspect my boss might have sabotaged a construction site and caused two men’s deaths? That he might have blackmailed Mr. Hamilton? Without hard evidence they wouldn’t listen to me.”

“I read the articles you wrote about the terrorist attack on that family. I knew since you had taken on a terrorist, you wouldn’t be afraid to look into Mr. Frye’s background and follow whatever trail you uncovered.”

If Mary only knew. It had taken Tess weeks to get over the incident. The injuries Captain Jackson had sustained from the invaders’ brutal beatings still horrified her. And Tess could only imagine how his wife, Marsha, was recovering after being terrorized for three days, and threatened with rape, while knowing that at any moment she might be forced to watch them murder her husband and child. The lead terrorist, Tabarek Moussa, had even dropped their baby into the deep end of their pool and then stood there, watching him drown. Thank God Brett had been there. Captain Jackson, Marsha and baby Alex had only survived because of him. They were all working to put the experience behind them.

“I didn’t really take a terrorist on, Mary. My fiancé did.”

“But you were there. And you helped him.”

“You still kept your head in an emergency, and you stood up to someone even though you must have been scared.”

Tess had found Brett’s gun in the car and followed him into the house with it when he didn’t reappear. She hadn’t had to use it,
thank God.
Brett had been the
real
hero. Facing Moussa unarmed. Fighting him in the water. Where did he find that kind of strength and courage?

And where had Mary Stubben found the courage to sneak around her boss’s office and ferret out information? They both had more bravery than she did.

“Are there key people in Mr. Frye’s organization he depends on? Certain foremen and workmen he hires consistently on important jobs?”

“If he hired someone to sabotage the Brittain site, they’d either be someone really close to him, or someone he’s never hired before.”

“They vet every person. Anyone with a record, their referral has to go directly through Mr. Frye.”

“Is there any way you can send me a list of people recently hired? And the key people he keeps on his payroll all the time? Only if you can do it without putting yourself in the line of fire, Mary.”

“I can do it. I have to pull together info like this all the time.”

“Okay. Please be careful. Once you send me the information, I’ll do a thorough background check on Mr. Frye and the employees, as well as this P.I., Henry Sullivan. And I’ll do some digging about the accident at Brittain Construction. I have some contacts who might be willing to give an opinion about how it happened.” Tess studied Mary’s anxious features. “But I want you to be careful. If your boss catches you snooping, you’ll certainly lose your job. If he’s as ruthless as he sounds, he might get physical or even take legal action against you.”

“Two men lost their lives in that accident, Ms. Kelly. If Mr. Frye did have something to do with it, someone needs to be told.”

“Take your suspicions to the police, Mary. Then you’ll at least be on record, and they might look into it. The accident is still an open investigation.”

“If I go to the police, Mr. Frye might learn it was me who reported it, and I’ll be in the same boat. It’s better if you investigate. You’re a public figure. He won’t be able to come after you.”

Obviously Mary had an exaggerated view of Tess’s importance at the newspaper. But it couldn’t hurt to look into Mary’s allegations. And, since she’d been transferred to crime news, her stories were getting wider readership.

If she found anything she could always go to the police herself.

Mary gathered her purse and stood. “I’ll keep in touch. And if I find anything else, I’ll email you.”

Tess stood as well, and offered her hand. She was startled to realize how much smaller Mary seemed standing next to her. It intensified Tess’s concern. “Be careful, Mary. I’ll keep you posted on my progress.”

Mary’s handshake was brief, her grasp cold. “Thank you. If it looks like I need to find a new job in a hurry, I’d appreciate a heads up.”

Tess watched Mary weave her way through a group of new customers and disappear out the café door while a niggling uneasiness settled in the pit of her stomach. She toyed with the rubber bracelet flash drive Mary had given her, staring at the logo from a local bookstore. She tucked the flash drive into her pocket. She’d check its contents once she had some privacy at the office.

Saraphina Rollins, the coffee shop manager, stopped by Tess’s table just as she gathered her things to leave. “Hey Tess, I didn’t want to interrupt your conversation, but before you leave, I wanted to say hi and thanks again.” They’d spoken at length after the shop was burgled some months before.

Tess smiled. “I’ve been covering stories in another part of town and haven’t been around in a while. Things going okay here?”

Kathleen Valentine by My Last Romance, other passions
Wild Island by Jennifer Livett
Someday Maybe by Ophelia London
Elephant Man by Christine Sparks
Miracle at St. Anna (Movie Tie-in) by James McBride
The Marriage Mart by Teresa DesJardien
Startup Weekend: How to Take a Company From Concept to Creation in 54 Hours by Marc Nager, Clint Nelsen, Franck Nouyrigat
The Fight for Kidsboro by Marshal Younger
Ensayo sobre la lucidez by José Saramago
Of Beards and Men: The Revealing History of Facial Hair by Christopher Oldstone-Moore