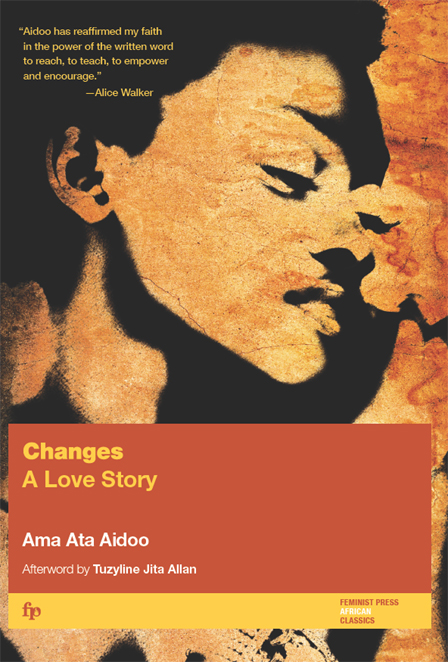 No part of this book may be reproduced, used, or stored in any information retrieval system or transmitted in any form or by any means, electronic, mechanical, photocopying, recording, or otherwise, without prior written permission from the Feminist Press at the City University of New York, except in the case of brief quotations embodied in critical articles and reviews.

This publication is made possible, in part, by public funds from the National Endowment for the Arts and the New York State Council on the Arts. The Feminist Press would also like to thank Sallie Bingham, Alida Brill, Joanne Markell, and Genevieve Vaughan for their generosity.

For Kinna, my daughter, and some of my favorite relatives:

To the reader, a confession, and the critic, an apology

Several years ago when I was a little older than I am now, I said in a published interview that I could never write about lovers in Accra. Because surely in our environment there are more important things to write about? Working on this story then was an exercise in words-eating! Because it is a slice from the life and loves of a somewhat privileged young woman and other fictional characters â in Accra. It is not meant to be a contribution to any debate, however current.

Any resemblance to actual persons, living or dead, is purely coincidental.

Esi was feeling angry with herself. She had no business driving all the way to the offices of Linga Whatever. The car of course stalled more than once on the way, and, of course, all the other drivers were unsympathetic. They blew their horns, and some taxi drivers shouted the usual obscenities about âwomen drivers'.

âCan I help you?' She was a bit startled. After she had parked her car and entered an open door, she had been quite surprised to find herself in an empty office. She had consulted her watch, and learned that in fact it was long past five o'clock in the evening. So she was wondering how the office had come to be open, as well as silently scolding herself, when the voice spoke.

She looked up into a very handsome face. Its owner knew it was handsome, too, plus one or two other flattering facts about himself. But Esi was not in any mood to notice looks or be charmed by self-consciously charming men.

âI'm from the Department of Urban Statistics,' she began, trying not to let her irritation show. âTwo of my colleagues and I are attending a conference in Lusaka on Thursday â¦'

âEh,' she continued, âI understand that normally this agency handles all travel arrangements for our office. But our secretary reported sick this morning, and since we don't know when she will be well enough to return to work, we thought maybe I could come and sort things out.'

But there is nothing tragic about that, is there? he wanted to ask. However, aloud, he asked her to follow him to his office. Inside, Esi felt the coolness of the air-conditioning immediately, and couldn't help reacting to it.

âPlease sit down,' said the man, indicating a chair from a group of rather plush and low office furniture in the centre of the room. She was aware of feeling grateful that he had not asked her to sit by his rather imposing desk. The chair by the desk looked high and not
so comfortable. She sat down, sighing audibly with relief. He eased himself into the armchair opposite her. Then he jumped up again.

âForgive me,' he virtually drawled. âI'm Ali Kondey, and the managing director of Linga ... I mean this agency... Please, can I have the pleasure of knowing to whom I'm speaking?' It was Esi's turn to feel apologetic.

Still standing, Ali asked Esi if he could get her anything to drink. She was almost tempted to ask for water, at least, but she didn't. She was thinking that since she was too late for the trip' to be useful in any way, why not just get out of that office as quickly as she could and get home before dark? She said as much to Ali, who was somewhat disappointed, but didn't think he should press the invitation.

âMay I sit down?' he asked Esi, who thought the request so odd she burst out laughing.

âWhy is that funny?' he asked, genuinely perplexed.

âIt is your office, and quite obviously your chair. Why ask me if you might sit in it?'

âWell you see,' he began to explain, and then changed his mind. One area of communication that always made him feel sad were these walls which the different colonial experiences seemed to have erected between the different groups of Africans â¦ especially when he hit them in relation to women.

Already seated, he said rather lamely, âNever mind. But about what you were saying â¦ do you know whether your secretary had already supplied my people with any specific information, like the day you would want to travel and when you are likely to come back?'

âOh yes, I believe she must have sent in everything. I just thought 1 should come and check on the tickets and flight bookings.' Esi was talking, but she had a distinct impression that Ali was not really listening.

âAlors,
Madame
, don't worry about anything. They will do everything, my people, everything will be ready, prompt, for your journey, I promise. What I don't know is which of them is handling the arrangements for you and your colleagues. But it will all be okay.' His voice was virtually lulling her to sleep. When she got up to leave, saying that in that case, she better be going, she felt as if she were waking from a trance. It was unbelievable. Meanwhile, Ali was not finished with her yet. He too had already jumped up.

âIn that case, let me finish locking up this office and drop you where you are going, please? ... It would be a pleasure.'

âYou are very kind, Mr Eh, Kondey, but actually I came in my car.' Esi became aware that something quite new and interesting was trying to make itself felt in that room that early evening, late in the month of June. She was not quite sure she wanted to welcome it or even identify it. Therefore, since she knew silences sometimes have a way of screaming strange messages, she spoke, to fill the air with words.

âYou see,' Esi went on, âmy car is here. Except that it isn't too good. In fact, it stopped a couple of times on the road. But â¦'

âAh â¦' said Ali who had been struggling to deal with a solid feeling of disappointment, âin that case, leave it here, and come with me in my car. I shall get it to your house for you early in the morning.'

What an alarming proposal, Esi was thinking. âNo, thank you again, Mr Kondey, but that would just be too complicated,' she said aloud.

By now they were out of his office and in the main office of the agency and business arena. They came straight out into the open, and he locked the office. Ali recognised what for Esi passed for a car, and a tiny smile came playing around his lips. He killed a comment. And in any case Esi was talking, with an extended hand.

âBye, Mr Kondey â¦ thank you very much â¦ and I hope your people will get in touch.' Then she was opening the door of her car, sitting before the wheel, putting it into motion, and with the old machine coughing like some asthmatic, she was gone.

Ali, who was completely fascinated with the sheer swiftness of her performance, caught himself saying, âBut of course ... but of course.' Then there was really nothing else for him to do but get himself home.

This was a Friday evening. As a strictly brought-up Muslim who had actually gone to the mosque earlier in the afternoon, there was only one way to interpret his encounter with this fascinating woman: a gift from Allah. So he should not let himself feel too bad about the
way the encounter had ended. If it was His will, things would right themselves in the end.

At that moment, the southern sky was ripped by massive lightning, followed by a heavy boom of thunder. As he got into his solid and luxurious vehicle, Ali had only one fear; that the threatening storm might sweep that woman and her car away. They both looked so frail.

Later, when she was much much grown, Ogyaanowa was to ask herself what she would have preferred if she had been consulted: