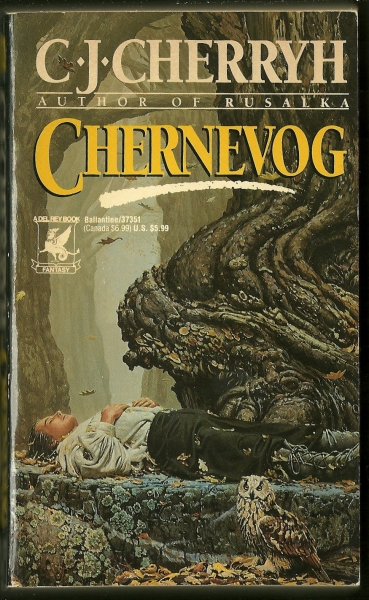 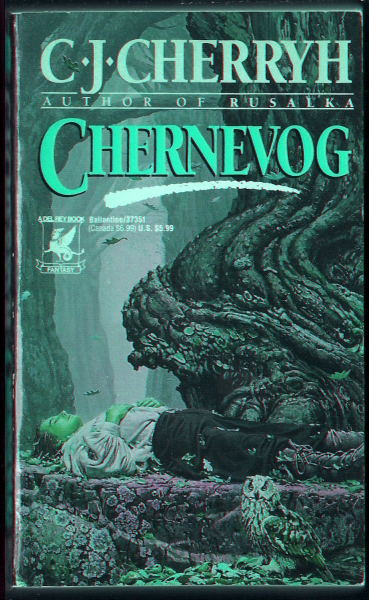 Sale of this book without a front cover may be unauthorized. If this book is coverless, it m
a
y have been reported to the publisher as
“
u
ns
old or destroyed
”
and neither the author nor the publisher may have received payment for it.

All rights reserved under International and Pan-American Copyright Conventions. Published in the United States of America by Ballantine Books, a division of Random House, Inc., New York, and simultaneously in Canada by Random House of Canada Limited, Toronto.

Wings snapped. A white owl stooped and rose, flapping heavily with its burden. The track stopped in a circle of wing-flailed snow, a dark splash of blood—

Sasha lay with eyes open, heart thumping, unable to move, unsure where he was or what bed he was in. He did not know what should be so ominous in such a dream, or why a spatter of blood should seem so terrifying. He lay listening to the house timbers creak above and below him, gained courage to put a chilled arm beneath the covers, and knew he was in his bed at his uncle's place, in Vojvoda.

It was forest snow, river snow piled up and making the roof creak. He was safe in his own bed in his friends' house, where nothing evil could come.

Nor would come, so long as the forest grew.

Springtime, and a whisper went through the old woods, a rustling of dry, dead limbs, a rattling and cracking of branches aloft
that came on like a rising gale and made Sasha look up from the seedling he was planting. The commotion stopped virtually over him, a last snapping of small branches, a hail of twigs and bits of bark on Sasha's head.

He stood up, brushed the detritus from cap and coat, shaded his eyes from further such falls and peered up into the sunlight. A huge, particularly brushy limb seemed to detach itself from among the branches and fall—not a plummeting fall, to be sure, but a rapid floating downward that broke more twigs and showered more bark. A massive, brushy creature settled like living growth onto the bole of a long-dead tree.

“
Misighi?
”
Sasha asked. It certainly looked like Misighi, lichenous and bristly and very, very old even as leshys reckoned years.

“
Yes, Misighi.
”
Its voice was the deep whisper of the woods. With another rustling it stretched out its multitudinous twiggy fingers;
and ran their quivering touch over Sasha's shoulders. They gently closed on his arms to draw him to the scrutiny of a vast, slightly mad eye,
“
Health,
”
it rumbled,
“
health. Young wizard, you smell of birch trees.
”

“
You look younger every spring,
”
Sasha said, patting Misighi's
rough
trunk. It was true, Misighi flourished like an old tree with a heart suddenly greening, a wild old tree that took unexpectedly well to a little help now and again from the garden next to the woods.

“
Birches,
”
Misighi said.
“
This is a place for birches.
”
“
All down this streamside.
”
Sasha pointed, thinking of the stream the way it would be, when he was many more years than sixteen. It was all dead trees now, a stream flowing through roots that no longer had a hold on the soil. But hard work reclaimed the woods, grove by grove from the heart outward; and last fall, tall saplings had arrived, rescued from deep shade upriver.

“
Roots to hold,
”
Misighi rumbled.
“
Birch and pine. Root and branch, yes, young wizard.
”
“
Is everything all right, Misighi?
”
“
Root and
branch. Promises kept. All kept.
”
One wondered, sometimes. Sometimes, at night when doubts grew most naturally, one thought about a grove and a stone in a ring of thorns, and on that stone a young man sleeping
…

Sometimes,
when
leshys came visiting so
suddenly
and by daylight, one felt a certain anxiousness about that place, and about the safety of them all.

But Misighi came calling for no reason, it seemed, beyond friendship and curiosity. Misighi briskly detached himself from the tree, moving at one instant so rapidly the eye could scarcely see him striding and at another so slowly he seemed no more than to drift above the seedlings he leaned close to examine.

It was true, a leshy's feet were backwards.

Sasha brushed dirt from his hands, hooked his thumbs in his belt with an uncomfortable twitch of his shoulders and a guilty, long-held question he had never asked Misighi. But he whispered now, thinking of the rain, the winter snow, the passage of time,
“
Is he suffering? Does he feel the cold at all?
”

Misighi rattled his many fingers, a sound like the shiver of wind through brush, and Sasha immediately had a waking dream of a young man's sleeping face, snowflakes touching and melting on dark lashes, settling delicately on colorless cheeks and nose and lips. The sleeper showed no sign of change or wasting.

But both pity and curiosity were so terribly dangerous.

“
The smell of birch trees,
”
Misighi said, which most likely was true: Misighi had evidently had the notion, no more, no less, to see what his neighbors were up to since the snows had melted. Misighi came and Misighi went in this forest, and spring and a streamside with new birches was a momentous thing to the old creature, whose woods so nearly had faded altogether. Misighi cared for every leaf.

And quite as suddenly,
“
Goodbye,
”
Misighi said, having seen what he had come to see. He climbed blindingly quickly
up and up the dead trunk and left with as great a commotion as he had made in coming.

Misighi was still a little mad, one had to remember.

“
Goodbye,
”
Sasha called after him, waving his cap, and perhaps Misighi heard.

After which Sasha gathered up his basket and his digging stick and moved on down the stream, to plant more seedlings.

“
I saw Misighi,
”
he told his friends that evening, when he came home to the river house. He told them how well Misighi had looked.

But the vision Misighi had given him he kept to himself.

Snowfall. There were hares in the woods, the first since the forest had died. Pyetr spied a fox hunting, and Eveshka nursed a half-frozen
field mouse
in a nest of rags beside the hearth.

Quite marvelously, kindling and firewood piled up near the old ferryman's house, as whole logs had done so long as they were useful. Leshys brought what they culled from the dead forest: one could see them some nights, tall as trees themselves in the moonlight, tricking the eye quite easily if one had not been accustomed to Forest-things and their tricks.

“
We could build a bathhouse,
”
Pyetr said, stamping in from the porch, his face stung with cold, his fair hair an ice-rimed hinge below his cap.
“
We certainly could use a bathhouse. There's plenty of wood for shingles
...”

Mist hung over the river, and over the path past the old ferry, where the trees stood like ghosts.

Come back, she heard her father call to her, and she knew that if she ignored his warning she would die. But in this dream she kept walking, toward the cloaked man on the riverside.

Why have you followed me? he always asked her.

And she said, always knew she was going to say:

Eveshka waked with a start and settled again, lay shivering against Pyetr's side, under piles of quilts.
“
Are you all right?
”
he asked, stroking her shoulder.

“
Only a dream,
”
she said. And shivered until he took her in his arms.

There was a book in the other room. Sasha kept it. Sasha read it, and she wished he would not.

She wished it burned. But that would not undo a single wish in it.

We'd better know what he did wish, hadn't we? Sasha reasoned against her fears. In her better sense Eveshka knew that he was right.

But tonight she kept thinking about the man in the mist, the young man sleeping on cold stone, ice on branches, and white flakes sifting down through a ring of
thorns...

Snow-melt and greening then, the
field mouse
went free and birch seedlings leafed, saplings of three years rising tall and substantial across the disused road, above banks of bracken fern and moss. The dead trees that once had completely shadowed the forest floor were fewer th
an the year before
...
falling to the wind, but never crushing a sapling; to lightning, but never spreading fire; and never lying long, except as a shelter for hares or young foxes.

It was, said the grandmothers in Vojvoda, a magical woods where backwards-footed Forest-things lured the unwary to disasters and untimely death—a terrible woods, grandmothers in Kiev might well say, where wizards lived, and against them not even the Great Tsar and all his army would venture.

A girl—a wizard-daughter—had drowned in the river that ran through that woods, and in the way of such unhappy dead, dwelt in a willow, a heartless rusalka who drank up whatever life came near her. She haunted the shore of that woods, a girl with long, pale hair
—
Quite likely now the rumor had gotten south (since even near such worldly places as Kiev there were surely grandmothers with their sources) that the old forest had been growing livelier of late, that a new wizard had taken old Uulamets' place on the riverside and broken the dreadful rusalka's spell.

But whether this was a good wizard or bad, the rumors failed to say.

In fact Sasha himself sometimes wondered what he was, being now eighteen and inclined, his good friend Pyetr insisted, to think far
too much about responsibilities...
His friend Pyetr being of course a worldly and married man
of all of twenty-and-six—married to the rusalka of the rumors, as happened: there was a great deal truly odd about their household that even the rumors of banniks and House-things and grandmothers surely must fall short of.

That Eveshka Uulametsova was no longer a rusalka, for one thing, nor even dead these days—and that the fey and mysterious boatman who traded with freeholders in the new wizard's name was that very scoundrel Pyetr the whole town of Vojvoda most gladly would have hanged.

Most of all Vojvoda would be amazed at the changes in The Cockerel's former stableboy: at least a handspan of height and a good breadth of shoulder— Sasha having done his share of wood-splitting and shingle-making in the remaking of his house, right along with Pyetr—

Whose hands, the god knew, were to this day more adept with the dice than with hammer and saw.

Notwithstanding which, over the last several years the old ferryman's cottage had quite well doubled its size, was comfortably (if eccentrically) shingled, with a fine (though slightly tilting) shed built onto the back, a bathhouse at the side, (it did perhaps spiral a little out of true) and, in the front and on the left, a garden springing up in green shoots, without a single weed. The last was Eveshka's doing, the carpentry was Pyetr's and Sasha's, and only proved, as Pyetr said, that not even wizardry could make a corner-post stand true.

Dust Up: A Thriller by Jon McGoran
From The Ashes by Alexander, Ian, Graham, Joshua
Holding Their Own IV: The Ascent by Joe Nobody
A Duke of Her Own by Lorraine Heath
Satin & Saddles by Cheyenne McCray
The Eligible Suspect by Jennifer Morey
War Torn by McNab, Andy, Jordan, Kym
Secrets of the Past by Wendy Backshall
Hallsfoot's Battle by Anne Brooke
Orchid Beach by Stuart Woods