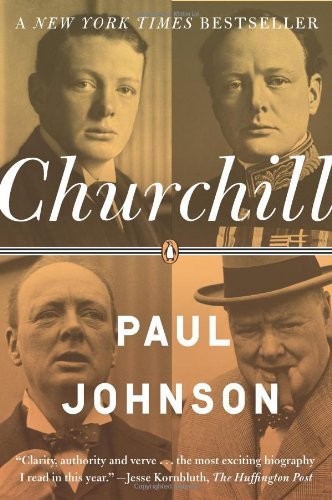 Table of Contents
Title Page
Copyright Page
Dedication
Chapter One - Young Thruster
Chapter Two - Liberal Statesman
Chapter Three - The Lessons of Failure
Chapter Four - Success and Disasters
Chapter Five - The Unregarded Prophet
Chapter Six - Supreme Power and Frustration
Chapter Seven - Glorious Twilight
Epilogue
Further Reading
About the Photographs
ALSO BY PAUL JOHNSON
Modern Times: The World from the Twenties to the Nineties
A History of the Jews
The Birth of the Modern: World Society 1815-1830
Intellectuals: From Marx and Tolstoy to Sartre and Chomsky
A History of the American People
Art: A New History
George Washington: The Founding Father
Creators: From Chaucer and Dürer to Picasso and Disney
Napoleon: A Penguin Life
Heroes: From Alexander the Great and Julius Caesar
to Churchill and de Gaulle

This book is dedicated
to my eldest son, Daniel
Chapter One
Young Thruster

O
f all the towering figures of the twentieth century, both good and evil, Winston Churchill was the most valuable to humanity, and also the most likable. It is a joy to write his life, and to read about it. None holds more lessons, especially for youth: How to use a difficult childhood. How to seize eagerly on all opportunities, physical, moral, and intellectual. How to dare greatly, to reinforce success, and to put the inevitable failures behind you. And how, while pursuing vaulting ambition with energy and relish, to cultivate also friendship, generosity, compassion, and decency.
No man did more to preserve freedom and democracy and the values we hold dear in the West. None provided more public entertainment with his dramatic ups and downs, his noble oratory, his powerful writings and sayings, his flashes of rage, and his sunbeams of wit. He took a prominent place on the public stage of his country and the world for over sixty years, and it seemed empty with his departure. Nor has anyone since combined so felicitously such a powerful variety of roles. How did one man do so much, for so long, and so effectively? As a young politician, he found himself sitting at dinner next to Violet Asquith, daughter of the then chancellor of the exchequer. Responding to her question, he announced: “We are all worms. But I really think I am a glow worm.” Why did he glow so ardently? Let us inquire.

Muse - Fighting Fate #1 by Green, Maree
Dead in the Dregs by Peter Lewis
The City of Ember by Jeanne DuPrau
The World Shuffler by Keith Laumer
The 13th: Frozen Destiny by Ela Lond
The Plains of Laramie by Lauran Paine
A Turn in the Road by Debbie Macomber
Something More (Girlfriend Fiction 11) by Mo Johnson
Irish Luck by RaeLynn Blue
Hell's Riders: Wild (MC Romance) by Fiona Flask